Currently, the majority of land used in South Africa for wildlife by the private sector has been converted from livestock farms to game farms and covers more land than state-owned provincial and national parks conservation areas combined. One animal that stands out above most wildlife regarding its popularity is the lion. From a private land owners’ point of view, lions are amongst the most sought after animals for photographic safaris and trophy hunting, leading to the increase of lion breeding and populations on private land to the point where the private sector is responsible for managing the largest portion of the lion population in South Africa. Therefore, the aim of this research is to determine the economic significance of lion breeding within the South African wildlife industry. Qualitative interviews were conducted with 21 breeders in South Africa. The results revealed that lion breeders contribute R500 million (US$ 42 million) annually to the South African economy. The contribution of this research is twofold. Firstly, it was the first time such research has been conducted amongst lion breeders, and secondly, it points to the economic significance of lion breeding regarding the amount spend by breeders as well as number of jobs maintained by this breeders. 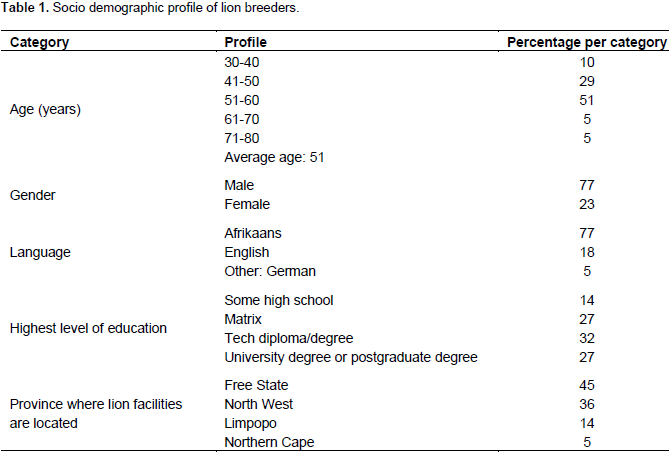 Operational costs of a typical lion breeding establishment
The operational cost refers to recurring costs per year
and therefore offers a reliable indication of the loss of economic activity in the absence of lion breeding. The breakdown of operational costs into various commodity items used to shock the SAM was obtained via the surveys. The operational cost of a typical lion breeding farm (Table 2) consists of the following items: Running costs (wages, salaries, water and electricity, maintenance, repairs and administrative repairs), marketing, licence fees, insurance, operating lease and general department.Table 2 provides an indication of what lion breeders spend their operational costs on. A typical lion breeder spends 63% of operational cost on running costs per month, while 13% is expended on general aspects, 9% on marketing, 6% on insurance, 6% on an operational lease and a small percentage on licence fees (3%). Based on these amounts, the average running cost per lion breeding facility is approximately R50,000 per month. This equates to R600,000 per year: If one multiplies this by the number of breeding facilities (297), the total amounts to R178 200 000 per year. This merely represents expenditure on operational costs per year, excluding the infrastructure costs.
The calculations of the direct, indirect and induced impacts of the operational cost per year of these farms are presented in Table 2. To determine the economic significance of lion breeding activities, all of the cost items were divided into one of the SAM commodity divisions (excluding salaries paid to workers). Using the multipliers, the subsequent indirect and induced effects on production in the economy of the direct spending by the total lion breeding industry were determined. The results were then aggregated into the main national accounts sector, as illustrated in Table 3. Production refers to the total turnover generated by each sector in the provincial economy. The production consists of two elements, the first being the transitional inputs by an activity and the second, the total value added that is generated by an activity
From Table 3, it is clear that the highest spending by lion breeders is on financial and business services. Therefore, the largest direct impacts are also in financial and business services (23.3%), manufacturing (28.1%), followed by construction (10.1%) and water and electricity (10.2%). Large indirect and induced impacts through the ‘backwards linkages’ are also experienced in the manufacturing sector, reflecting an indirect impact of R17.2 million and induced impact of R24.75 million. Agriculture (0.8%), personal and social services (2.6%) and mining (3.0%) recorded the lowest total impacts.
The aggregate multiplier can be derived by dividing the total impact by the direct impact. According to this calculation, the production multiplier is equal to R3.93, which signifies that every R1 spent by a lion breeder leads to an increase in production in the South African economy of R3.93.The impact of the private lion industry on labour income is illustrated in Table 4, reflecting the effects on labour. In the production process, labour is an important factor and considered to be the most variable short-run input, so that any increase in production normally creates a positive impact. Table 4 indicates the effect of the private lion breeding industry’s annual spending on job creation. The labour multiplier is derived from labour and output ratios and consequently illustrates the increase in the demand for labour due to an increase in production. Table 4 indicates that the private lion breeding industry is sustaining an additional 613 employees in the economy. This excludes workers who are working on the farms. Including such workers, a total of 1,162 jobs are sustained in the economy due to private lion breeding activities. Cadman (2009) indicated that 900 people are employed, and the current research showed more people are employed. The sectors most affected regarding job opportunities are financial and business services (34.6%), construction (25.1%), and the manufacturing sector (11.6%).

Household income
Using the SAM multiplier, it was possible to determine the impact of spending at the level of families’ income. To determine the impact, particular household income multipliers for each activity were calculated; these results were then multiplied by the values of the total sector’s impact using the household allocation, from which it is possible to derive the benefit that low-, middle- and high-income families derive from lion breeding activities. From Table 5 it is clear that low-income households benefit to the extent of R20.3 million from the private lion industry.Again, the total lion breeding industry’s operational spending per year is used; it is evident that this spending creates economic activities in some sectors, which leads to income for households working in that sector. In total, the R88 million spent by lion breeding creates an income of just more than R249 million for the economy. This excludes the salaries/wages paid by the average farmer, which amount to an additional R67.4 million per year for the industry, making the industry’s contribution to household income more than R316 million annually. The income multiplier is, therefore, R2.81, which means that for every R1 spent by a typical lion breeder, families earn up to R2.81 in the economy. The report by Cadman (2009) found that lion breeding contributes R78 million, including land. This research, therefore, found that lion breeding contributes more than that what was previously found, excluding land.

From the results of the research, the following discussions are presented. Firstly, the research highlights the profile of a typical lion breeder. The average age of product owners is 51 years of age, indicating that they have been in the industry for some time, since it takes time and money to develop infrastructure for lion breeding. A significant percentage (59%) of respondents is well educated, which supports the notion that breeding of wildlife has become a science, and therefore is crucial in safeguarding the industry. Lion breeders can be regarded as entrepreneurs, and these results give us the profile of entrepreneurs in this industry. It is clear that lion breeding operations are small to medium-sized enterprises and these entrepreneurs contribute to job creation and development in rural areas.
Secondly, the economic contribution of these breeding facilities from a regional economic development point of view is important as that these facilities are mainly situated in the rural provinces of South Africa (Free State, North West, Limpopo and Northern Cape) where there is a need for economic development and job creation since they are some of the poorest provinces. It is, therefore, important for local government to support these types of developments in rural areas. One example is streamlining legislation and regulations in the wildlife industry as they differ from province to province to improve entrepreneurial opportunities and by doing this stimulate needed economic growth.
Thirdly, spending by lion breeders impacts several sectors in the respective provincial economies and consequently on the national economy. The sectors that benefit most as indicated are business services, construction, and the manufacturing sector. If lion breeding is banned or ceased to exist, these sectors will be impacted on especially in rural areas. This will result in fewer employment opportunities and reduction in new entrepreneurs in the breeding of wildlife. To conclude, the study makes three contributions to current research; firstly, it was the first time that an investigation has focused on the breeders and the economic contribution they made, which is based on sound methodology; secondly, the research afforded greater insight into the world of lion breeding and who the breeders are (profile) and where they operate in South Africa; and thirdly, the research also contributes to conservation in South Africa, since the private lion industry does create healthy lion populations.

The author(s) have declared that there is no conflict of interest.

The authors would like to thank NRF (National Research Foundation) and South African Predators Association (SAPA) for assistance in conducting this research.