Teff [Eragrostis tef (Zucc) Trotter, 2n=4x=40] is the majority food crop in Ethiopia. Nowadays, it is annually cultivated on top of more than three million hectares of land, used for over six million of farmers and more than 50 millions of people,  used as staple food (CSA, 2015). Compared to other cereals, teff has broad adaptation to the heavy, water-logging, clay soil areas of the Ethiopian highlands and teff in general is resilience to marginal areas. Grain of teff in our country is mainly adopted for food after baking the ground flour into pancake-like soft and sour bread, ‘injera’, which forms the major component of the most favorite national dish. It is also consumed in the form of porridge, and somewhat fermented or un-fermented non-raised breads (‘kita’ and ‘anebabero’), native beer, ‘talla’, and more alcoholic cottage liquor, ‘katikalla’ or ‘arakie’ (Assefa et al, 2015).
For human health, benefit of teff is the high fiber content of the grain. This is predominantly important in dealing with diabetes (low glycemic index) and gluten free, preventing anemia (high iron content). Unlike other cereals, the seeds of teff can be easily stored under local storage conditions without losing viability since the grains are resistant to attack by storage pests (Ketema, 1997). In the past to show sustainability of teff in Ethiopia, the late prime minster MeleseZenawi said “Unless a miracle happens, teff will ceased to be staple food for many Ethiopians”. But currently, teff is expensive in Ethiopia. Many countries other than Ethiopia are using teff products. Teff has remarkable genetic traits useful for most Ethiopian farmers to utilize for coping with erratic climatic conditions, generation of household income, and fulfilling concerns of nutritional needs. Moreover, the conservation and utilization of teff genetic resources, offer a reliable basis for enhancing food security and developing crop diversification in the moisture stress and challenging agro-ecological areas of the country (Assefa et al., 2015).
In Ethiopia, climate is highly variable, and is projected to become more variable due to climate change, with the potential for increased frequency of extreme weather events. For sustainable and stable food production of teff, maintaining adaptation within and between different agro-climatic conditions is increasingly being realized as the most suitable and crucial action. So the major problems for adaptation for teff are limited availability of varieties, wide scale use of traditional and unimproved cultural practices, susceptible to lodging, inadequate seed and extreme system, changing rain fall patterns. So, due to the above reasons Landraces and current cultivars, teff give low yield in the study area. As far as teff production and area coverage is concerned, Amhara region is ranked 2nd next to Oromia.
Productivity of teff in East Gojjam zone (17.39 qt/ha) is greater than that at national average (15.75 qt/ha) (CSA, 2015). Dejen is one of the district of East Gojjam, which has immense potential for teff production. However, adaptability trial of nationally released teff varieties was not done in the district so far. Improved varieties of teff were not accessed for farmers of Dejene district as well. So, the objective of this study was to evaluate genotypic and phenotypic variability and agronomic performance of recombinant inbred lines (RILs) and varieties of teff, in rain fed condition at DejenWoreda.

Description of study area
This experiment was conducted in Sebshengo Kebele, DejenWoreda, East Gojjam of Amhara Region in 2015/16 cropping season. DejenWoreda is 230 and 335 km distant from Addis Ababa and Bahir Dar, respectively.
The altitude of Sebshengo kebele varies from 2360 to 2492 masl. Sebshengo kebele has 2278.73 ha (77.2%) of vertisols and 675.5 ha (22.8%) of nitosols. Mean average, average maximum and minimum temperature is 16, 21.3 and 10.21°C, respectively. The annual rainfall is 756.8 mm.
Experimental materials, designs and layout
Twenty-three nationally released and one local check teff varieties were evaluated under the experiment. Varieties were obtained from Deziet Agricultural Research Center (Table 1). 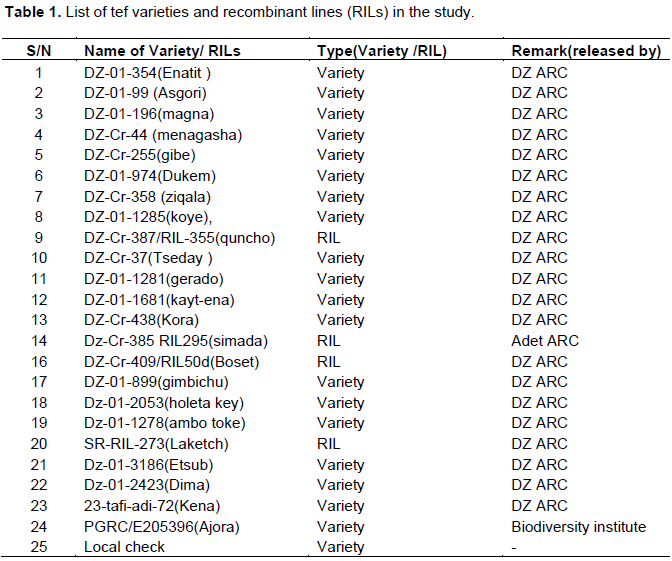 The experiment was laid out with randomized complete block design with three replications. The land was ploughed with oxen four times until it becomes fine, ready for sowing. The plot size was 2 m2 (2 × 1 m) and the spacing between blocks and plots were 1.5 and 1 m, respectively. The applied seed rate was 15 kg/ha (3 g/plot). Soil fertilizer was applied with the recommended rate to the area that is DAP (100 kg/ha) and urea (160 kg/ha).
Sowing was done on August 04, 2015. And optimum moisture was available for germination. All other management practices were undertaken as per the recommendations. Data for traits such as days to emergence, days to heading, days to maturity, grain filling period, shoot biomass (g), grain yield (g), stand (%) and straw yield (gm) were taken on plot basis. Plant height (cm), panicle length (cm) and lodging index (0 to 5) in% were recorded from 5 randomly sampled plants per plot (15 plants per variety).
Statistical analysis
Mean values of these samples were used to estimate the performance of each variety for the characters/traits under thought. The analysis of variance was subjected to analyze the collected data using R package ‘stat’ (version 2.12.2) (R Core Team, 2012). The following model was utilized in the analysis of variance;
Where;
Yij = observed variation
µ = mean effect
βi= ith block effect
τj= jth treatment effect
εij= treatment x block interaction, treated as error
Phenotypic and genotypic variance components were estimated based on the following formula (Sharma, 1998).

Where, H= Broad sense heritability, Vp = phenotypic variance, K= is selection deferential 2.06 at 5%.
Lodging index
The degree of lodging was assessed just before the time of  harvest by visual observation, based on the scales of 1 to 5 where 1 (0 to 15°) indicates no lodging, 2 (15 to 30°) indicate 25% lodging, 3 (30 to 45°) indicate 50% lodging, 4 (45 to 60°) indicate 75% lodging and 5 (60 to 90°) indicate 100% lodging (Donald, 2004).
The scales were determined by the angle of inclination of the main stem from the vertical line to the base of the stem by visual observation. Each plot was divided based on the displacement of the aerial stem in to all scales by visual observation. Each scale was multiplied by the corresponding percent, given for each scale and the average of the scales represents the lodging percent of that plot. Data recorded on lodging percent were subjected to Arcsine transformation described for percent data by Gomez and Gomez (1984).

High productivity of grain yield from this area is most likely attributed to continuous supply of nutrients through the developmental stages. There was no incidence of disease during the experiment. The ANOVA which depicted acceptable level of coefficient of variation (CV) is for most of the traits/characters. However, higher CV was observed for PL, SBGP, YD and STRYD.
Mean separation of yield and yield related traits
Based on the significance of the ANOVA, test of significance difference of mean values for 7 traits of varieties was employed (Table 3). It was observed that varieties were significantly different from each other in grain and straw yield. Based on this, Dz-01-3186 (Etsub) (28.1qt/ha, 112.8 qt/ha), Dz-01-2053 (holeta key) (24.48 qt/ha, 105.1 qt/ha) and DZ-01-99 (Asgori) (22.6 qt/ha,  103.2 qt/ha) had the highest grain yield and straw yield, respectively. Whereas DZ-01-1281(gerado) (14.46 qt/ha) and local (14.29qt/ha) were inferior in grain yield. 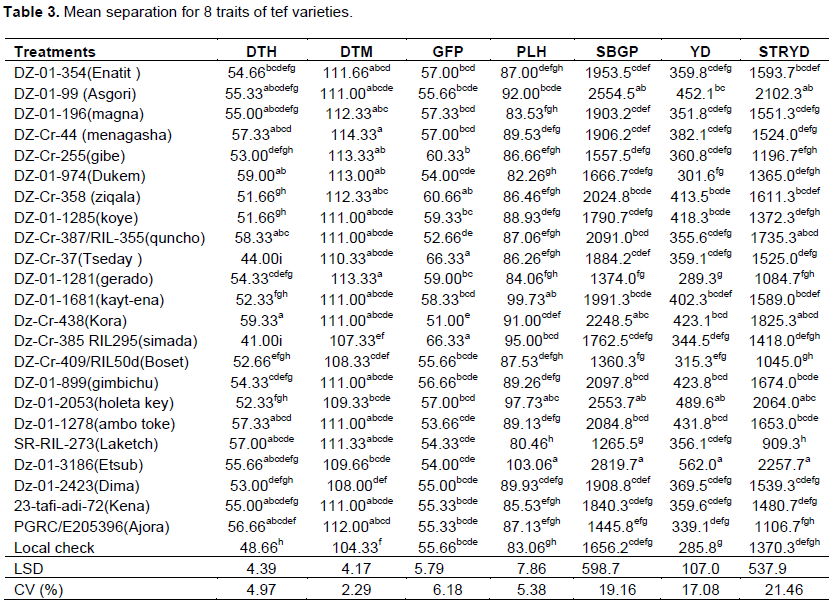 Similarly, SR-RIL-273(Laketch) (45.46 qt/ha) had the lowest straw yield. In this trial, Dz-01-3186(Etsub) (103.06 cm) and DZ-01-1681(kayt-ena) (99.73 cm) showed greater plant height among teff varieties whereas SR-RIL-273(Laketch) (80.46 cm) was the shortest variety. Plant height is an important trait that positively contributes to yield directly and negatively to lodging on the other hand. Even if lodging is a major problem of grain yield production of teff, this finding is not significant. Dissimilar result was also reported by Delden et al. (2010).
Among 24 varieties, Dz-Cr-385 RIL295 (Simada) had 66.33 days for grain filling but 17.2 qt/ha for grain yield. Prolonged grain filling period might leads to drought stress condition and grain yield decreased. DZ-Cr-44 (Menagasha) matured in 114 days was late maturing variety as compared to other varieties tested in this experiment whereas, local check was early maturing compared to the improved varieties (104 days). The depicted, DZ-Cr-44 (Menagasha) cannot acclimatize moisture deficit environment, since it needs enough moisture for prolonged period to be more productive for grain yield whereas, the local check can escape dry condition because of its earliness.
With their mean values, among 24 teff varieties, Dz-01-3186(Etsub), Dz-01-2053(holeta key), and DZ-01-99 (Asgori) showed the highest yield with shoot biomass, grain yield and straw yield. Shoot biomass, grain yield and straw yield showed direct correlation for all varieties (Figure 1).This result was consistent with previous studies on teff which showed that, shoot biomass is the contributor for yield (Chanyalew, 2010) as cited by Assefa et al. (2015). Because of efficient utilization of applied urea fertilizer increased vegetative growth, this resulted for higher biomass production. In this finding, shoot biomass and straw yields contributed significantly for grain yield production and productivity. In teff growing areas, farmer’s desire is too high to get more straw yield for their animals feed. 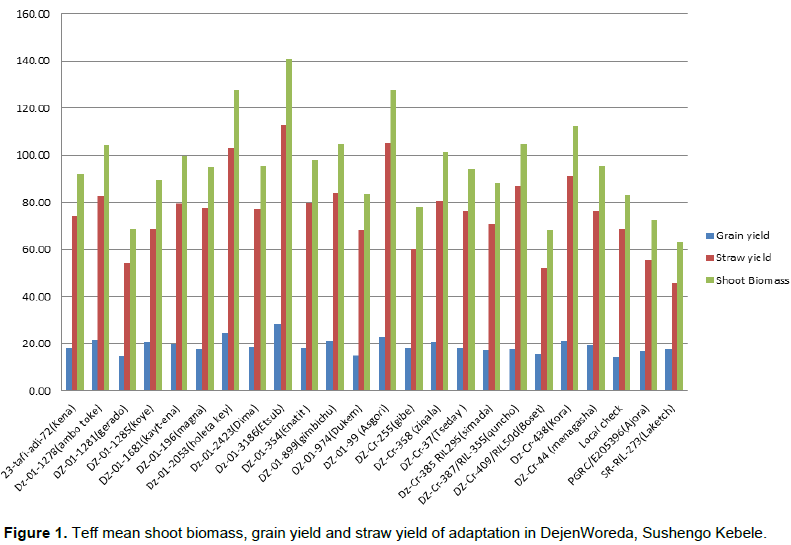 Heritability in broad sense has been found effective in the selection of superior genotypes on the basis of phenotypic performance. The highest heritability value was days to heading (69.77%) followed by plant height (49.43%).This showed that characters are least influenced by environmental factors. In general, most traits explained moderate to high heritability values except for lodging index (Table 4). Habtamu et al. (2011) reported similar result of high heritability values for days to heading, plant height, grain filling period, grain yield and straw yield. Though this does not mean that, these values assurance achievement in selection resemblance between relatives is controlled by the proportion of the additive genes, not by all of the genetic variation (Falconer and Mackay, 1996). High value of genetic gain was observed for yield (17.35), shoot biomass (23.03) and straw yield (23.49). Similar result was also reported by Asefa et al. (1999). Genetic gain showed significance level, indicating to the possibility of selection for a trait. High genetic advance values showed traits, which are governed by additive genes, useful for selection. Genetic variation affects how fast progress will be, during selection on a phenotype.

This study has shown the genotypic and phenotypic variability among varieties with many traits. Variability is important in selection of better variety with grain yield and other economic advantages would be easier.
Days to heading, grain filling period, plant height, lodging index, shoot biomass, grain yield and straw yield showed significance differences (p<0.01) among the treatments. Amongst the experimental materials, outstanding varieties like Dz-01-3186 (Etsub) (28.1qt/ha, 112.8 qt/ha), Dz-01-2053 (holeta key) (24.48 qt/ha, 105.1qt/ha) and DZ-01-99 (Asgori) (22.6 qt/ha, 103.2 qt/ha) showed the highest grain yield and straw yield, respectively. Heritability values of days to heading (69.77%) and genetic advance for yield (17.35), shoot biomass (23.03), lodging (23.15) and straw yield (23.49) also showed promising result for teff variety selection for improvement.
In both heritability and genetic advance, there was less environmental influence in DejenWoreda. As recommendation based on this finding, promising varieties in grain yield namely Dz-01-3186 (Etsub), Dz-01-2053 (holeta key) and DZ-01-99 (Asgori) would be adapted and used by farmers of DejenWoreda, to enhance tef productivity and production. In general, it can be concluded that adaptation of teff varieties in DejenWoreda possibly will be used to improve the existing potential of teff production. Farmers shall access high yielding varieties which will be more productive and yield increment. This research would be useful as bench mark/good start for teff breeding programmes and policy interventions as far as Dejen is concerned.