Can conservation incentives promote willingness to coexist with large carnivores in the eastern Serengeti ecosystem?

Coexistence between humans and carnivores is only possible (Carter and Linnell, 2016)if both biological and social strategies are used wisely to curb conflict (Redpath et al., 2013; Treves and Karanth, 2003)and thereby reduce carnivore mortality (Treves and Karanth, 2003). According to Carter and Linnell (2016), coexistence is the “dynamic but sustainable state in which humans and large carnivores co-adapt to living  in  shared  landscapes where human interactions with carnivores are governed by effective institutions that ensure long-term carnivore population persistence, social legitimacy, and tolerable levels of risk”. Aiming for coexistence is the way forward to reduce human-carnivore conflict, which in turn will save carnivores in the future (Dickman, 2010; Woodroffe et al., 2005).
Many protected areas in Africa are facing great challenges, and the areas adjacent to their borders pose a serious threat to large carnivores and other species (Caro et al., 2013). The main target for conservation stakeholders in Tanzania is reduction of the decrease in the carnivore population adjacent to many networks of protected areas. The edges of protected areas are gradually shrinking due to human population increase, resulting in increased demand for land for settlement and farming. Such demands tend to encroach on arable and fertile lands adjacent to protected areas, which negatively impacts the conservation of carnivores and other wildlife species  (Shivik 2006; Nyhus and Ronald, 2010). In rural areas, especially those close to protected areas, land for livestock husbandry is open access, which attracts pastoralists to such places. Most people in Africa live in rural areas and there are many trade-offs encountered by people living adjacent to protected areas. The livelihoods of such societies have been compromised due to the costs associated with wildlife interactions (Adams and Hutton, 2007; Nana and Tchamadeu, 2014; Vedeld et al., 2012). Thus, people living adjacent to protected areas tend to have negative attitudes towards wildlife as they impact their livelihoods negatively (Dickman et al., 2014; Romanach et al., 2007; Røskaft et al., 2007).
Previous studies have revealed that once these conservation conflicts are managed, negative impacts on biodiversity are reduced as well (Lagendijk and Gusset, 2008; Redpath et al., 2013; Vedeld et al., 2012; Woodroffe et al., 2005). The management of conflicts between people and carnivores will cultivate positive attitudes, which in turn will enhance conservation initiatives (Conover, 2002). This observation also supports findings that people affected by large carnivores through human attacks and livestock depredation normally express negative attitudes and revenge by killing the carnivores using either poison and/or snares (Abade et al., 2014; Dar et al., 2009; Hazzah, 2006; Linnell et al., 2001; Romañach et al., 2007).
Despite human population growth causing carnivore habitats to shrink, measures should be taken to merge both human activities and carnivore conservation (Treves and Karanth, 2003). If efficient management practices are implemented, coexistence between people and predators can be enhanced (Linnell et al., 2001). Livestock depredation in rural areas is the main cause of human-carnivore conflict. Consolation programs should be implemented to help the victims realize tangible benefits from to the presence of carnivores (Breitenmoser, 1998; Skonhoft, 1998). It has been found that implementing conservation incentives such as a chemoprophylactic program improves coexistence between humans and large carnivores (CDPNews, 2003). Chemoprophylaxis is the prevention of infectious disease by using chemical agents to boost livestock immunity (Jibbo et al., 2010). If local people are satisfied with conservation incentives, their conflicts with carnivores may be reduced.
Therefore, understanding local communities’ attitudes towards carnivores is necessary in conservation planning. When attitudes are positive towards large carnivores, people are more willing to coexist with these animals, which contributes to their conservation (Hazzah, 2006). For instance, African lion populations are declining due to the negative attitudes of local communities living in proximity to these species and the resulting actions (Dickman, 2017). Thus, promoting and motivating local communities to increase their willingness to coexist with large carnivores will enhance their conservation initiative (Dickman et al., 2014).
The overall aim of this study was to test whether people’s willingness to coexist with large carnivores would change after the implementation of a chemoprophylactic program. In testing, we had two hypotheses: (1) Livestock diseases are the main contributing factor to livestock loss and cause more deaths than carnivore depredation among the livestock of the Maasai and Sonjo tribes, and (2) therefore, the implementation of a chemoprophylactic program would be of paramount importance to these communities because it would reduce livestock losses, which would be expected to improve tolerance towards large carnivores.

Study area
The study was conducted in the Eastern Serengeti ecosystem, Tanzania, and all surveyed villages were located in the Loliondo Game Controlled Area (LGCA) (Mbise et al., 2018, 2020). The Maasai tribe lives inside the LGCA, and the Sonjo tribe lives on the eastern border of this area. Administratively, the LGCA is under the Ngorongoro District Council (MNRT, 2013)and covers approximately 4500 km2 (Lyamuya et al., 2016).
The LGCA is bordered by Serengeti National Park to the west, Ngorongoro Conservation Area to the south, Kenya to the north, and Lake Natron to the east (Lyamuya et al., 2016; Masenga and Mentzel, 2005). The LGCA has a rich diversity of ungulate species, including wildebeest (Connochaetes taurinus), zebra (Equus burchelli), impala (Aepyceros melampus), Grant’s gazelle (Nanger granti), and Thomson’s gazelle (Eudorcas thomsonii), which occur sympatrically with humans. The famous Serengeti-Mara wildebeest migration passes through parts of the LGCA. The area has all five large carnivore species: lions (Panthera leo), leopards (Panthera pardus), cheetahs (Acinonyx jubatus), spotted hyenas (Crocuta crocuta), and African wild dogs (Lycaon pictus) (Holdo et al., 2010; Maddox, 2003). The Maasai and the Sonjo tribes experience significant livestock losses to large carnivores and diseases (Lyamuya et al., 2016). The authors collected data from six villages: three Maasai tribes (Ololosokwan, Soitsambu and Oloipiri) and three Sonjo tribes (Yasimdito, Samunge and Sale) (Figure 1). The Maasai tribe are pastoralists, while the Sonjo tribe are agro-pastoralists (Masenga and Mentzel, 2005).
Data collection
Data were collected in September 2016 and again in February 2017 using a pre-test and post-test questionnaire survey. The study villages were randomly selected; three from each tribe (the Maasai and Sonjo). In September 2016, the survey of people’s willingness to coexist with large carnivores was carried out as the pre-test with the aim of gathering responses from the Maasai and Sonjo tribes before the conservation incentive (chemoprophylactic program) was introduced. The people’s willingness to coexist with large carnivores was assessed in an open way to determine whether the responses were positive, neutral, or negative. The question asked, “Will conservation incentives be helpful to motivate your willingness to coexist with large carnivores?”. The question assessed the respondents’ willingness to coexist with large carnivores in their area based on whether they agreed that conservation incentives promote willingness to overlook livestock loss due to depredation by large carnivores (positive), whether the respondents disagreed on the issue (negative) and whether the respondents had no opinion regarding the two ideas (neutral). To avoid influencing the respondents’ answers, we did not mention what incentive would come next. In conjunction with this question, we also recorded the reported number of livestock losses for the last two years (2015 and 2016) caused by large carnivores and diseases. 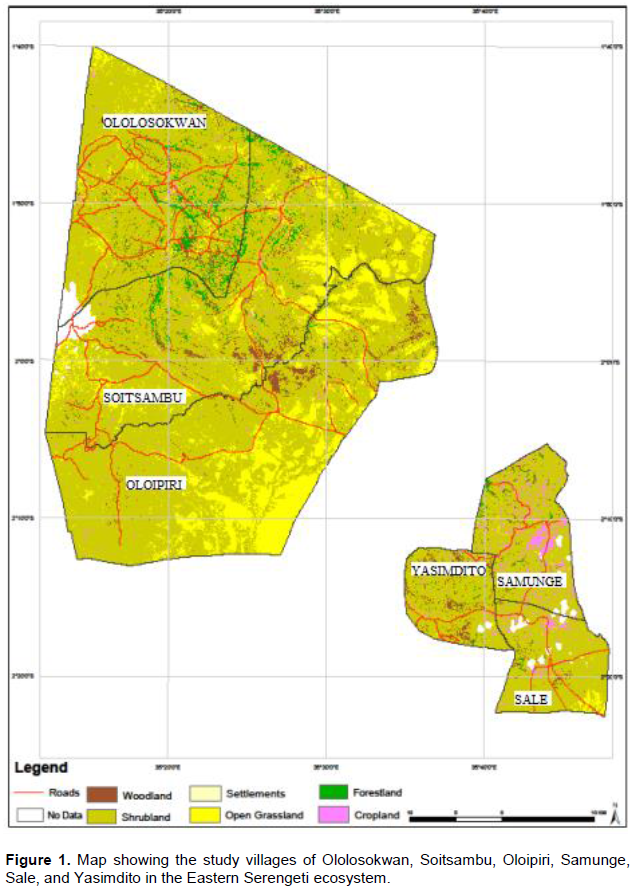 Common diseases in the area were coenurosis, East Coast fever (ECF), Contagious Bovine Pleuropneumonia (CBPP), and anthrax. However, in the chemoprophylactic program we targeted helminths infestation and tick-borne haemoparasites especially ECF. ECF is caused by Theileria parva from infected ticks (Rhipicephalus appendiculatus). ECF affects lymph nodes first and then spreads to the red blood cells, resulting in severe lung edema and finally death (Gilioli et al., 2009; Kivaria, 2007). Coenurosis is a common neurological disease for both goats and sheep caused by tapeworms of the genus Taenia multiceps. The cyst is transmitted when infected domestic animals and large carnivores contaminate pastures with their feces. The infective Coenurus cerebralis cysts are then swallowed by sheep and goats (Scala and Varcasia, 2006; Sharma and Chauhan, 2006). CBPP is transmitted by infective aerosol inhalation of Mycoplasma mycoides mycoides (Almaw et al., 2016; Scott, 2014). Anthrax is a zoonotic disease caused by the Bacillus anthracis bacterium, which can be transmitted to humans through the consumption of infected carcasses or by handling infected animal products. The bacterium has no animal reservoir but is an environmental bacterium that exists in spore form in the environment and in vegetative form in infected animals, and the disease affects all warm-blooded animals, both wild and domestic (Hugh-Jones, 2014; Smith et al., 1999).
After four months (February 2017), a post-test survey was carried out at the same time that chemoprophylaxis was given to the livestock of our previous respondents. The chemoprophylactic program exercise was administered by a Tanzania Wildlife Research Institute (TAWIRI) veterinary officer. We administered two sets of drugs: (1) oxytetracycline hydrochloride 20%, a long acting antibiotic against a wide range of gram-positive and gram-negative bacteria and other microorganisms, such as Mycoplasma pneumoniae, Coxiella burnetti and Plasmodium spp.; and (2) albendazole 10%, a broad spectrum anthelminthic for the prophylaxis and treatment of immature and mature infectious gastrointestinal nematodes, lung worms, tape worms and trematodes.
During February, due to drought, some respondents moved their livestock to other villages, so our sample size dropped from 180 to 120 respondents. We asked the same question about their willingness to coexist with large carnivores if they received conservation incentives that was asked previously. In the Maasai and Sonjo tribes, only men have a right of say, so we had more male participants than female (Table 1) (Mbise et al., 2018). Therefore, it is a challenge to acquire an equal number of males and females, and doing so requires additional time in the field (Mbise et al., 2018). Age categories were split into three groups (youth = 18 – 35 years, adult = 36 – 49 years, and elderly = above 50 years). Most of the respondents belonged to the adult group (Table 1). Most of the respondents had a primary education (Table 1), and all the respondents were either from the Maasai or Sonjo tribes (Table 1).
Data analyses
They used SPSS version 24 for data analyses (IBM, 2016), which included Kruskal-Wallis tests, paired samples t-tests (Table 6), one-way ANOVA tests (Table 7) and chi-square tests. Kruskal-Wallis test was used to determine the predictor variable that explained most of the variation in people’s willingness to coexist with large carnivores (Table 1). Paired t-tests were used to assess potential changes in people’s willingness to coexist with large carnivores in both tribes. A one-way ANOVA test was used to explain the differences in livestock losses due to diseases and depredation. The chi-square test was used to explain disease frequency differences between the two tribes. The data were tested for normality, and the p-value was set to below 0.05.