The profession of Biokinetics promulgates the philosophy of exercise is medicine, which is founded on the salutogenic benefits of exercise and human movement (Strydom, 2005). A biokineticist is a final-phase exercise therapist who rehabilitates orthopaedic and non-communicable diseases (NCDs) in the post-medical and/or final phase of the pathogenic healthcare dimension (Strydom, 2005). Biokineticists are also strongly involved in health and wellness promotion campaigns within the fortogenic health paradigm as a preventive measure against development of NCDs, fighting to ensure continuing and improved quality of life for patients (Strydom, 2005). The scope of the profession also allows practitioners to be involved in health and wellness campaigns aimed at arresting the development of a sedentary lifestyle, NCDs, and the consequent reduction in patients’ quality of life (HPCSA, 2017). South African healthcare legislation permits biokineticists to practice in the private healthcare sector and in selected public sector such as the South African Defence Force (HPCSA, 2017). Presently biokineticists are not employed by the South African Health Department in order to manage patients in public hospitals, clinics, or schools (Strydom, 2005). However, the South African biokinetic profession has admirable exercise therapeutic expertise to help manage the NCDs and HIV/AIDS epidemic, similar to the clinical skill set of the American College of Medicine clinical exercise physiologist (Evans et al., 2016; Ellapen et al., 2017). Australia, Europe and United States of America have embraced a multi-disciplinary strategic approach to combat the global NCDs and HIV/AIDS epidemic, which has enlisted the service of exercise therapists such as clinical exercise therapists (Arena et al., 2015). Exercise therapists have been identified auxiliary medical personnel that are instrumental in managing various NCDs and HIV/AIDS patients through exercise and structured physical activity rehabilitation programmes (Dishman et al., 2012). Regular structured rehabilitative exercise and physical activity has empirically demonstrated its value to enhance quality of life and longevity of the aforementioned patients (Dishman et al., 2012). The South African chapter of this global exercise therapy campaign to manage the NCDs and HIV/AIDS epidemic enlists the services of the South African exercise therapist, known as a biokineticist (Evans et al., 2016; Moss and Lubbe, 2011).

To better understand the impact of the aforementioned developing trends regarding biokinetic students-in-training and intern-biokineticists on the global growth of the profession, one needs to be briefly oriented with the education and training of Biokinetic graduates in South Africa. This background information will explain what it means to be a biokinetic student-in-training, an intern biokineticist and a practicing biokineticist, underlining their progression within the profession. Originally Biokinetics education and training entailed a three-year graduate credential in Human Movement Science or Human Kinetics and Ergonomics, which was followed by a post-graduate degree specialisation in Biokinetics, commonly referred to as the 3+1 model (Ellapen et al., 2017). During the postgraduate year of tuition (4th year), students commenced their mandatory two years of professional clinical internship (Nel, 2014). At this time, the incumbent student is required to register with the Health Professions Council of South Africa (HPCSA) and Biokinetics Association of South Africa (BASA) as a student biokineticist-in-training. After the academic completion of their post-graduate tuition, the student gains eligibility to begin their second year of clinical internship (5th year), and is afforded the opportunity to register as an intern-biokineticist with BASA and the HPCSA (BASA, 2018). The second year of clinical internship necessitates that the intern-biokineticist secures a clinical internship at a private biokinetic practice and/or at one of the biokinetics training institutions that are accredited by BASA and the HPCSA. There are 12 South African tertiary institutions that provide education and training, seven continue to offer the 3+1 model, while the other five institutions follow the new professional degree (Ellapen et al., 2017). The academic content of both degrees are similar, however in the new professional degree students start their clinical internship earlier (Ellapen et al., 2017). Students enrolling for the new professional Biokinetics credential need to register with BASA and HPCSA as a student-in-training from their first year of tuition (BASA, 2018).

The nature of this study was descriptive and observational in design. The authors consulted literature within the public domain, thereby not requiring ethical approval as per National Research Guidelines. Figure 1 provides a graphical display of the data collection and review processes. The HPCSA Annual Reports of 2012/2013 and 2016/2017 were reviewed so as to determine number of students-in-training, inter-biokineticists and practitioners within the profession of Biokinetics. Strydom (2005) have highlighted that it is illegal for biokineticist in South Africa to practise without HPCSA registration, and therefore only registered biokineticists were taken into consideration. The HPCSA Annual Reports provided statistics regarding the number of biokineticists and student-in-training registrations from 2007 to 2017 as well as intern-biokineticist registrations from 2012 to 2017 (HPCSA, 2013, 2017) (Figure 1). The South African HST was consulted in order to determine population demographics (HST, 2008, 2014). The South African Council of Medical Schemes (CMS) was consulted so as to identify the prevalence of biokinetic rehabilitative NCDs and HIV/AIDS (CMS, 2013, 2014, 2015, 2017) (Figure 1). Furthermore, only the private healthcare sector prevalence of NCDs and HIV/AIDS were identified, as per South African healthcare legislation pertaining to the profession of Biokinetics. It is important to note that the profession of Biokinetics exceeds the simple rehabilitation of NCDs, and includes the rehabilitation of orthopaedic injuries, as well as health and wellness campaigns, physical activity and performance enhancement (Ellapen et al., 2017). As such, the rehabilitation of HIV/AIDS falls within the scope of the profession of biokineticists and has therefore also been included in the private healthcare patient market. Due to the difficulty of ascertaining the statistics concerning the biokinetic rehabilitation of orthopaedic injures within the South African private healthcare sector, this study has only focused on the growth rate of the profession of Biokinetics and the subsequent rehabilitation of NCDs and HIV/AIDS patients. 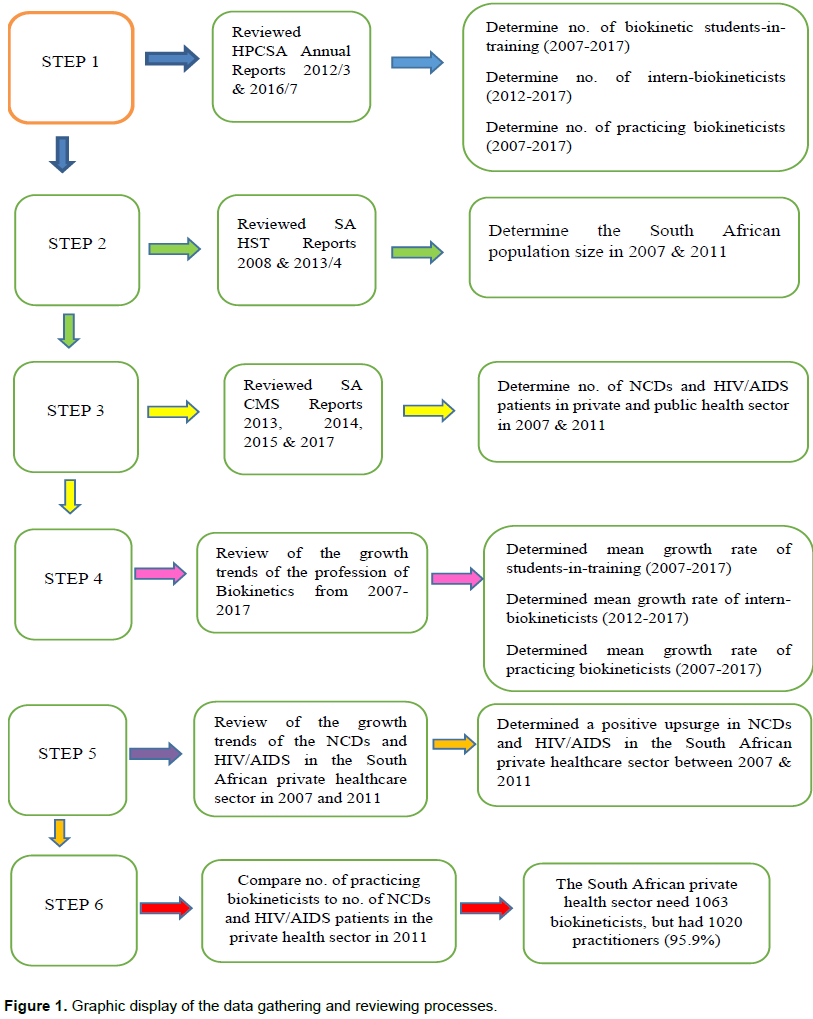 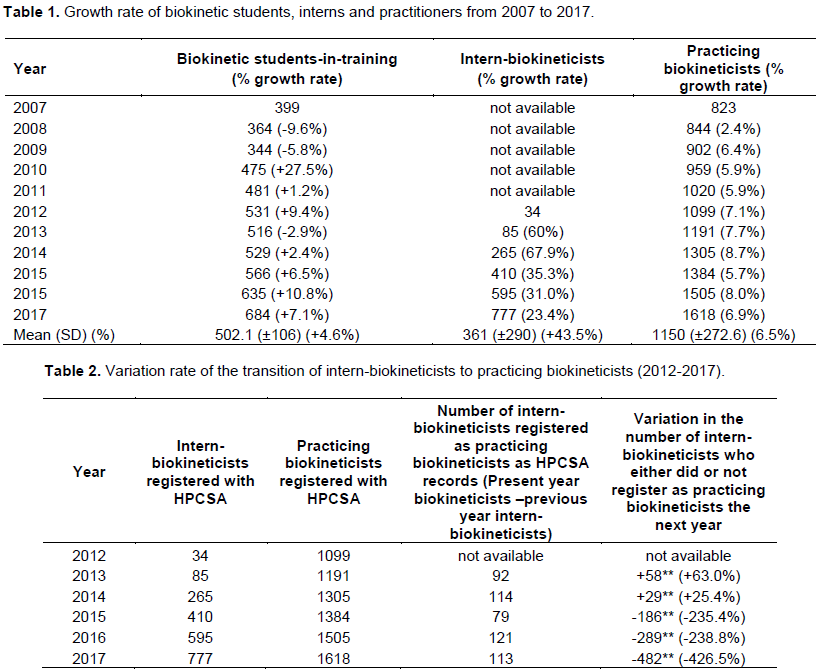 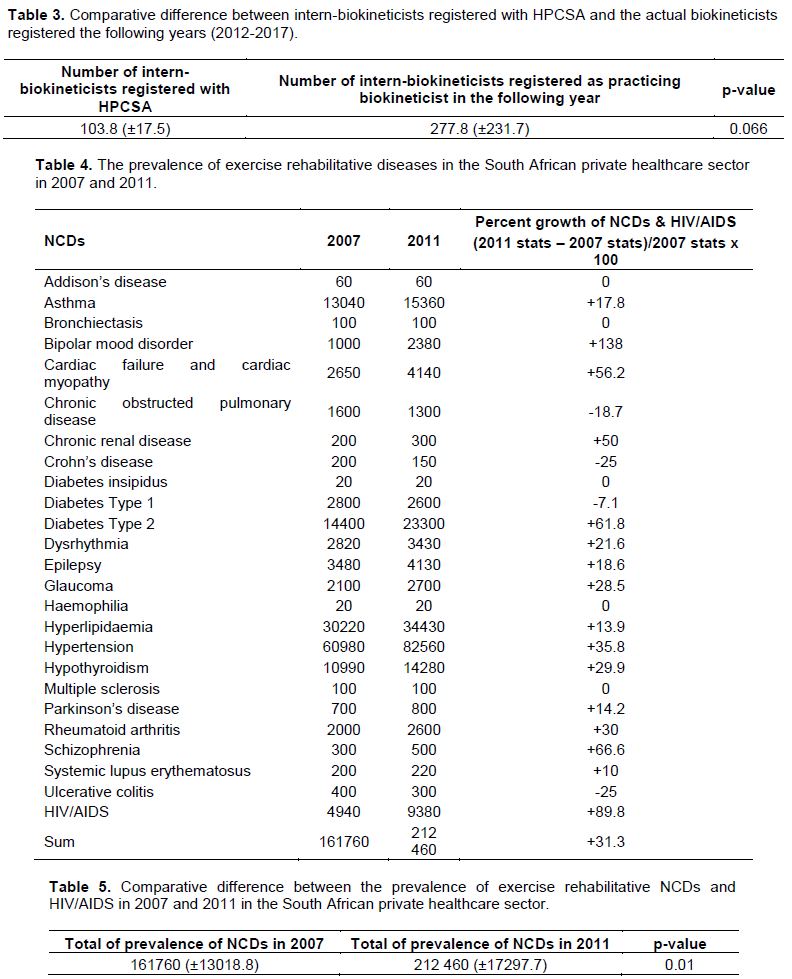 The progression of students from students-in-training into intern-biokineticists is marked by an average positive growth of 43.5% (from 2013 to 2017). This is suggestive of the fact that students are keen to gain credentials and these statistics furthermore reflect the work integrated learning stage of the clinical internship of a biokineticist, which falls under the preview of both academic training institutions and private practitioners. This is a unique stage of clinical training, unlike the other South African exercise therapy profession of Physiotherapy (HPCSA, 2017).

Does the number of practicing biokineticists meet the demands of the patient market?

The number of practicing biokineticists in South Africa is progressively growing, accompanied by both student-in-training and intern-biokineticists demographics. Despite this a recent attrition of intern-biokineticists from the professions (2015 to 2017) can be noted. An investigation identifying the reasons for this attrition should be undertaken in order to determine the predisposing factors influencing their decision. The growth in the number of biokineticists together with the upsurge in the prevalence of NCDs seems to be equitable as per 2011 statistics. However, a new threat of oversaturation of biokineticists in the South African private healthcare sector seems inevitable. It is strongly advised that BASA and the various South African biokinetic training institutions take note of these emerging trends.

The authors would like to thank Marco Barnard for his industrious efforts in sourcing the statistics for this communication.