The semi-annual variation of the residual H and Z components of geomagnetic field was studied by analyzing magnetograms with sixty-one years data. Mean monthly residual H- and Z-component field (Hdiff and Zdiff) variations were computed using appropriate technique. Semi-annual variation exhibited Hdiff peaks in the equinoxes, which for low latitudes, was higher during March/April than in September/October. In the mid and high latitude stations also, Hdiff exhibited clear semi-annual variation albeit with less intensity during the equinoxes. Mid latitude broad peaks in the said variation suggest longitudinal asymmetric contributions to the ring currents. Zdiff in all the latitudes exhibited greater asymmetry in its distribution in comparison with Hdiff. Zdiff variation was largest in the high latitude regions, showing strong solar activity dependence. It is suggested that asymmetric component of the ionospheric coupling to the magnetospheric current may be responsible for the observed irregularities in the low- and mid-latitude Zdiff semi-annual variation, while the East-West and West-East currents in the auroral oval region may be modulating the ring current effect on residual field at high latitudes.

Solar activity refers to the natural phenomena occurring within the magnetically heated outer atmospheres in the sun throughout the solar cycle. This activity takes the form of solar wind acceleration, flux emergence, light and energy particles released from the sun such as solar flares, coronal mass ejection or solar eruptions, and coronal heating; as well as sunspots which are one of the most commonly noticed forms of solar activity. Geomagnetic activity can be separated into auroral magnetic activity and magnetic substorms. Auroral magnetic activity involves the enhanced auroral light displays, currents, and magnetic perturbation associated with times when favorable magnetic coupling causes enhanced plasma flows down the cusp field lines into the auroral regions. Magnetic substorms occur, however, when the magnetosphere is  loaded  with  excess  energy during a period with sustained southwards interplanetary magnetic field (IMF-Bz). These geomagnetic activities constitute a major part of the monthly disturbances in the geomagnetic field and they are generally quantified by the geomagnetic storm time index – Dst, and the average planetary disturbance index – Ap. The Ap index represents the daily intensity of planetary magnetic activity as seen at sub-auroral latitudes, while the Dst measures the ring-current magnetic field based on hourly average values of the H component recorded at four low latitude observatories after subtracting the average square and the permanent field from the disturbed magnetic field (Fares Saba et al., 1997).
The measured magnetic field on the surface of the earth is generally linked to three sources: i) main field which is generated by hydrodynamic dynamo system in the Earth’s core, ii) current systems in the ionosphere and magnetosphere, and iii) magnetized rocks in the Earth’s lithosphere. The magnetospheric and ionospheric currents are usually regarded as the external magnetic field components of the measured field at the surface of the Earth. These external fields are also responsible for induction currents at the mantle of the Earth which further modify the measured field.
Many authors have attempted to separate the symmetric and asymmetric contributions to the magnetospheric ring current using spherical harmonic analysis (Banks, 1969; Xu et al., 2015), wavelet analysis (Mendes et al., 2005; Xu et al., 2009), and ion density variations (Daglis and Axford, 1996). Most of these studies have investigated the symmetric ring current using the well-known signature of Dst during geomagnetic storms. The ring current is an electric current carried by charged particles trapped in the magnetosphere. It is caused by the longitudinal drift of energetic particles. The ring current provides the geomagnetic conditions for magnetic storms to settle down (Mendes et al., 2005). It dominates at middle and low latitudes, and a system of ionospheric electrojet currents flowing in the auroral oval dominates at higher latitudes. The ring current is ever present and its long term structure is detectable in the monthly mean geomagnetic field essentially leading to weaker mean geomagnetic field during disturbed times and stronger field during quiet times. Forbush and Beach (1967) first introduced the concept that departures of quiet and disturbed X component of the geomagnetic field (XRC(Q) and XRC (D), respectively) maintain a fixed ratio to each other throughout the solar cycle such that;

Thus by equating XRC(D)-XRC(Q) with X(D-Q) the absolute ring current field can be estimated from observatory data, once an appropriate value for k is found. Furthermore it was suggested that k is a universal constant. This implies that the geometry of  the  ring  current  field  is  the  same throughout the solar cycle and the same on quiet days and disturbed days. The difference measures the absolute strength of the ring current and should define the Dst connection to monthly and annual means. In the present study, Equation 1 is applied and the North component (X) replaced with H-component and monthly mean computed for all days to reflect mean strength of the ring current for the particular month.
The objectives of this study are to investigate the variation of the residual field on seasonal and annual scales in low-, mid- and high latitude stations and examine them for indications of possible anomalous behavior.

The magnetic data used for this study was obtained from 10 observatories within the northern hemisphere, cutting across low-, mid- and high-latitudes. Two of the stations (Sanjuan, and Honolulu) were used in computing Dst (disturbance storm time) index. Dst index is a function of the current inside and on the boundary of the magnetosphere, and it measures the ring-current magnetic field based on hourly average values of the H component. The data was originally in hourly time resolution and was converted to daily values covering the year 1950 to 2010 (61 years). Data presented in X and Y were converted to H since the interest is in H and Z components, where X, Y, H and Z represent northerly intensity, easterly intensity, horizontal intensity and vertical intensity, respectively of the geomagnetic field. The geomagnetic field data is provided by the world data center (WDC) for geomagnetism Kyoto, Japan (Table 1). The daily Dst, average planetary disturbance (Ap) index, solar wind (SW) velocity and density, sunspots number (SSN) are provided by OMNIWeb. Data was selected based on the criterion of length and continuity of series of the geomagnetic field components. Monthly mean from all days in a given month for H-component and Z-component denoted by Hall and Zall was computed as: 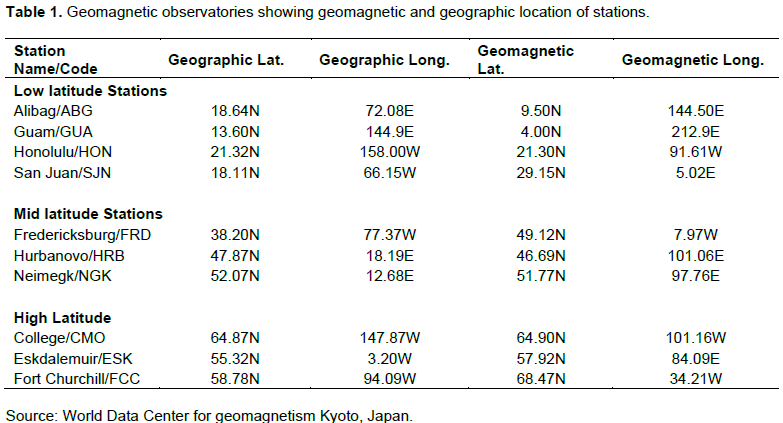 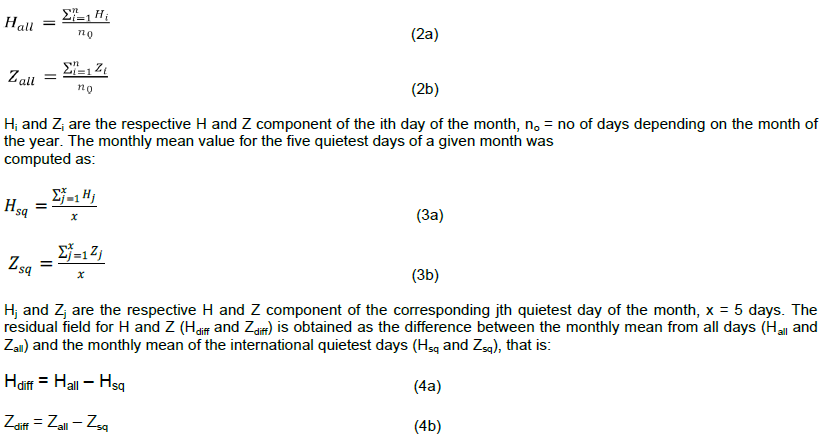 Hdiff and Zdiff are the residual fields which measure the absolute strength of the ring current in addition to other external and internal sources of geomagnetic field (excluding the solar daily variation) for the month assuming that the ring current geometry does not change much over monthly scales.
The linear correlation coefficients between the monthly mean Hdiff and Zdiff for all the stations and some solar (SSN)/geomagnetic (Dst,Ap) activity indices is shown in Tables 2a and 2b, respectively. The mean of the low, mid and high latitude stations were taken and plotted over the period of years of this study to obtain the semi-annual Hdiff and Zdiff variations. These plots are shown in Figures 1, 2 and 3 respectively. 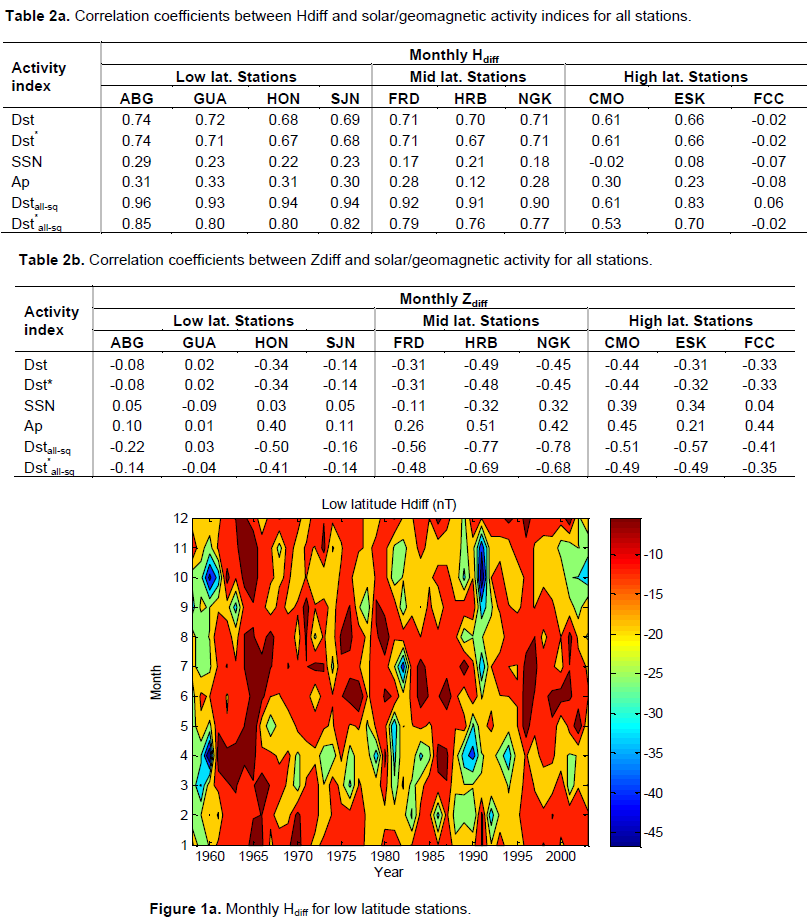 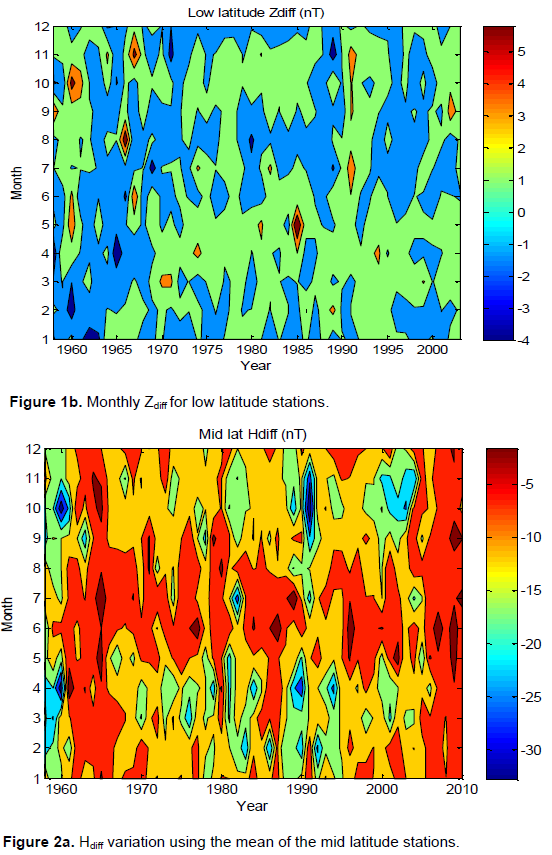 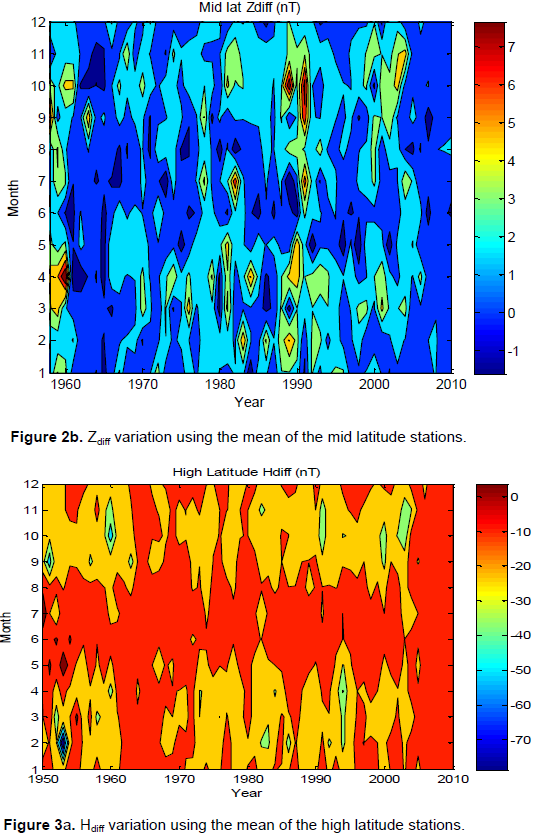 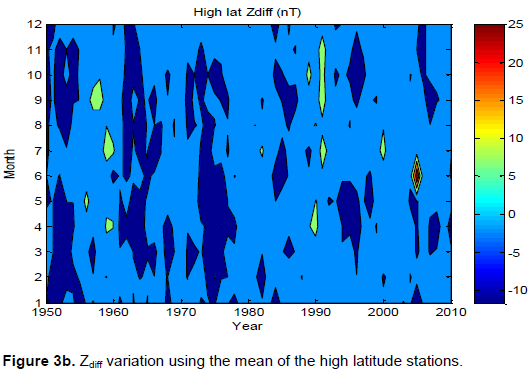 The present study showed that the internal induced field contribution to the Dst-related disturbance is significant and quite symmetric in the low- and mid-latitudes, and weaker in the high-latitude. Dst*all-sq may be potentially useful for reproducing the magnetic field in mid- and low-latitudes. Hdiff semi-annual variation in the low latitude is more prominent during years of maximum solar activity. For solar minimum years, the semiannual peak is slightly greater in March/April than in September/October. The Hdiff enhancements observed in the mid- and high-latitude during   March / April   and   September / October  were generally more intense than those observed in the low latitudes. Zdiff is largest in the high latitude and showed a tendency of being more negative during periods of solar minimum as compared with the periods of solar maximum. The westward auroral current compliments the ring current during periods of high solar activity leading to a positive Zdiff and an observable semi-annual variation in the Hdiff. Other asymmetric sources (like the field aligned current) and regional tendencies in conductivity profiles may also be contributing to this variability.