Ionosphere region is the part of atmosphere layer where radio waves reflect for telecommunication. This is due to its composition in particles. Solar radiation hit particles in ionosphere. This phenomenon causes an ionization of particles in the ionosphere. According to the particles density in this region, radio waves emitted in telecommunication can pass through this region or be reflected. The ionization of ionosphere depends on solar cycle phase, season, and local time that are all closely linked to solar activity. Many models are developed to carry out ionosphere parameters. They are all focused to find a better approach of ionosphere behavior. The present study uses Thermosphere-Ionosphere-Electrodynamics General Circulation Model (TIEGCM) to investigate ionosphere region, during solar maximum and minimum phases. The critical frequency of F2-layer (foF2) and the total electron content (TEC) parameters are carried out by running the model. The values of the parameters are represented on a three-axis graph to give an overview of their time profiles. The seasonal and annual results obtained from this study show a good correlation between TIEGCM and International Reference Ionosphere (IRI) model predictions in the same conditions. The study confirms that particles density in ionosphere behaves as an obstacle for waves transmission. During solar maximum, characterized by a high solar activity, ionization of ionosphere is higher than that at solar minimum. This is similar to what is observed between nighttime and daytime. The study also highlights the “winter anomaly” phenomenon.

Different approaches are developed to investigate ionosphere region (Roble et al., 1988; Bilitza et al., 2014; Qian et al., 2010; Jin and Park, 2007; Bittencourt and Chryssafidis, 1994). These approaches are mainly based on empirical, semi-empirical, simulating models, linking mathematical simulation and data report. Data are provided by stations while the simulation models are developed  in  research   centers.   Interactions   between solar radiations and particles in ionosphere, in which the major constituents are N2, O2 and O (Rishbeth and Gariott, 1969), ionize the molecules and atoms. This ionization phenomenon does not modify ionosphere electrical properties that stay neutral. Ionosphere layer moves like a plasma. This study is devoted to the use of Thermosphere-Ionosphere-Electrodynamics General Circulation Model (TIEGCM) to carry out two parameters of ionosphere. TIEGCM is a numeric model of the earth’s upper atmosphere, including the upper stratosphere, mesosphere and thermosphere, that is, developed by a research team of High Altitude Observatory (HAO) at National Center for Atmospheric Research (NCAR) for ionosphere parameters determining (Richmond et al., 1992). The model is in continuous improvement. These parameters are the critical frequency in the F2-layer of ionosphere (foF2) and the total electron content (TEC). foF2 defines the limit value of the frequency above which waves can pass through ionosphere region without being reflected. TEC represents the electron bulk surface density in the F2-layer. When radio waves pass through ionosphere, this means that they are not reflected in this region and so, no communication is possible, because no relation can be established between the emitter and the receiver. Ionosphere is then the site of radio waves reflection for telecommunication because of its density in particles. The knowledge of ionosphere composition leads to a good prediction of this layers’ behavior.

In a previous work, an approach has been used to describe foF2 behavior with TEC parameters by running International Reference Ionosphere (IRI) model (Nanéma et al., 2018). It is about the simultaneous time variability of TEC and foF2. The present work is focused on the use of this approach to predict the behavior of foF2 and TEC by running TIEGCM. TIEGCM is a tridimensional simulation model that uses discrete values for geographic parameters (144 values for longitude and 72 values for latitude). This study uses the 1.94-version of the model. A software program decrypts and uploads 90 ionosphere parameters. TIEGCM is available at HAO. IRI is a semi-empirical model using data recorded on different stations. This model is continuously updated and versions are on-line accessible every 4 years.

The 1.94 version of TIEGCM is used in this study. Running the model leads to the knowledge of time values for 72 parameters. The Total Electron Content (TEC) and Maximum  Peak  of  Electron Density (NmF2) time values are carried out. NmF2 is linked to foF2 by Equation 1:

The parameter foF2 is obtained in Hz when NmF2 is in m-3. The minimum and the maximum phases are obtained for Rz < 20 and Rz > 100, respectively (Zerbo et al., 2011; Ouattara et al., 2012; Gnabahou and Ouattara, 2012), Rz pointing out the sunspot number. TEC and foF2 at each solar cycle phase are well described by their values in the month characterizing each season: March for spring, June for summer, September for autumn and December for winter. The methodology is based on processing the data from the five quietest days of each characteristic month. For a characteristic month, the time value of a parameter is obtained by calculating the average value at the same time on all of the five quietest days as follows:

A quiet day is characterized by its index Aa inferior to 20 nT. By help of this last condition, the selected days for the study are shown in Table 1.

Annual values of TEC and foF2 are given by the following Equations 4 and 5:

In Equations 4 and 5, the “k” index points out the selected season in the solar cycle phase. 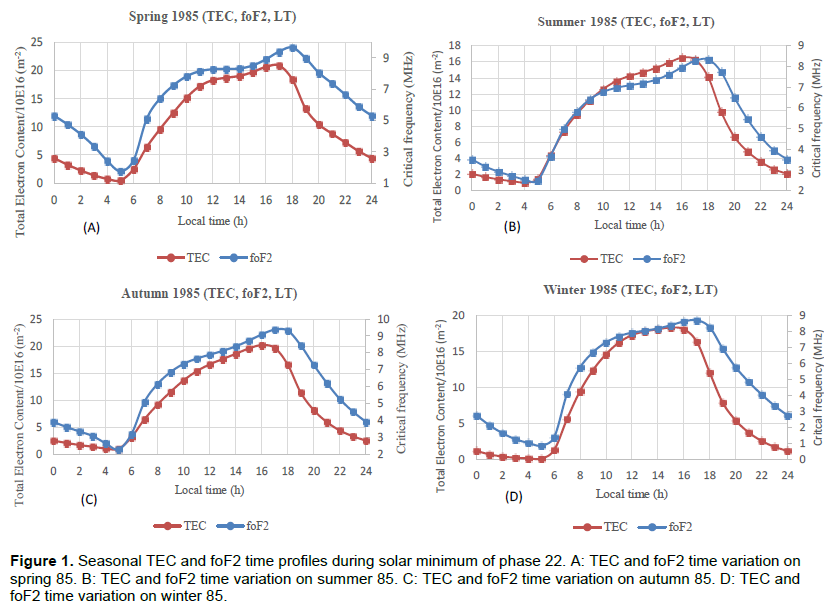 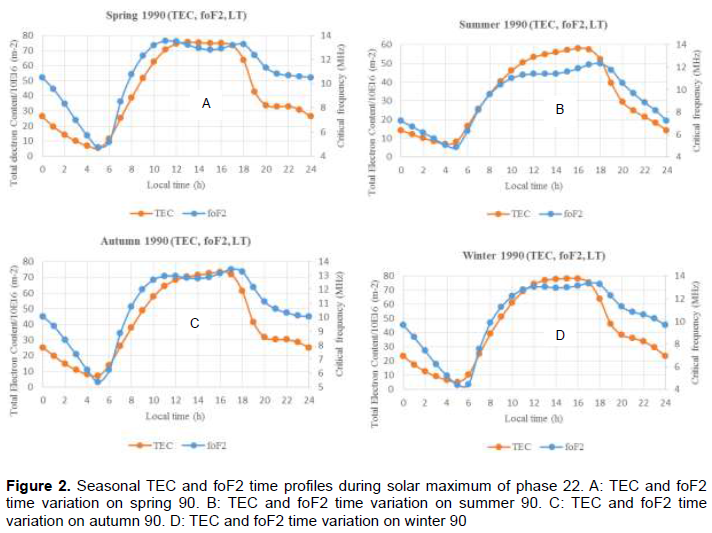 Figures 3 and 4 present TEC and foF2 annual time variation on solar minimum and maximum, respectively. Linear trend lines of these profiles are also represented on the graphs. 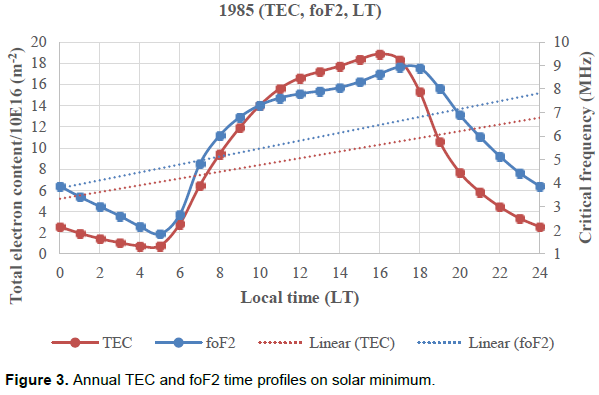 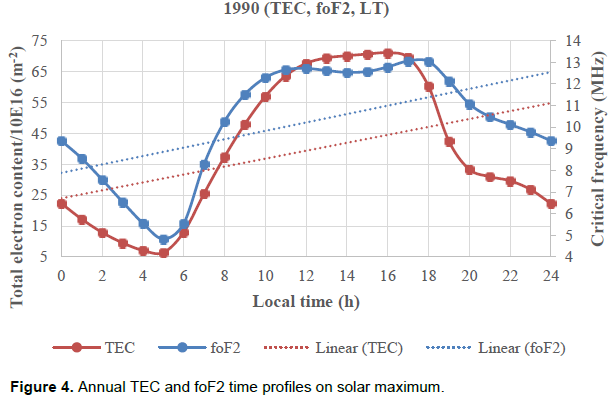 Seasonal variability of TEC and foF2

Figure 2a, b, c and d represents seasonal time variation of TEC and foF2 during solar maximum. These figures show decreasing profiles for foF2 and TEC during nighttime and increasing profile at daytime. For solar maximum, TEC maximum value is 70.1016 m-2 while for foF2 maximum value is 12 MHz. During this phase, the critical  frequency  in  F2-layer  presents  the  same  trend with TEC variation. This has been already observed for solar minimum condition. “Winter anomaly” is also observed on TEC time values during solar maximum.

Seasonal time profiles of TEC and foF2 show the same trend for these parameters all day long: the lower the density in particles, the lower the frequency of radio waves. This means that electron bulk surface density behaves as a barrier for radio waves frequency. Figures 1 and 2 show that at solar maximum, foF2 and TEC values are higher than those at solar minimum at the same time. This means that during solar maximum, ionization of particles due to solar radiation is higher than that on solar minimum. Solar activity is more intense during maximum phase than minimum phase. This result has been reported in a recent study by Kotia et al. (2020).

The density of particles in ionosphere increases from nighttime to daytime during both phases of the solar cycle. This is due to the activity of solar radiations that become more intensive thus leading to greater ionization. The consequence of this phenomenon is the enhancement of ion density in the layer.

Annual variability of TEC and foF2

This study is devoted to ionosphere investigation by running Thermosphere-Ionosphere-Electrodynamics General Circulation Model, a numerical model. The critical frequency in the F2-layer, derived from maximum peak of electron density, and the total electron content are carried out. The study shows that the bulk surface density of particles in ionosphere behaves as an obstacle for waves transmission. This study also highlights the increase of particles’ density with solar activity.  Thus,  on maximum phase, solar activity is higher than that on minimum. The phenomenon observed from nighttime to daytime characterized by the growth of particles density in ionosphere region, is similar to what is observed from minimum to maximum solar cycle phase. This phenomenon is due to the high ionization level on solar maximum and at daytime. The “winter anomaly” phenomenon is also highlighted in this study.