The government of Ethiopia has been working in creating and increasing the number of open defecation free kebeles as a strategy of improving sanitation coverage in the country. However, apart from increasing sanitation coverage, data on utilization of the constructed latrines was not well investigated. Therefore, the study objective was to assess the latrine utilization coverage of the kebeles who have already declared open defecation free. Community-based cross-sectional study design with multistage sampling technique was employed. Data were checked, coded and entered into EpiInfo version 7 and analyzed using SPSS version 20. Bivariable and multivariable logistic regression model were fitted to identify factors associated with latrine utilization. Odds ratio with its 95% confidence interval was used as a measure of association. Eighty-three percent of the dwellers utilized their latrine. The odds of latrine utilization was higher among households which had latrine constructed after 2 years [AOR: 2.27; 95% CI: 1.23, 4.19], maintained latrine [AOR: 2.71; 95% CI: 1.61, 4.55], and had under-five children [AOR: 2.02; 95% CI: 1.24, 3.26]. However, households which had latrine constructed from wood and plastic [AOR: 0.44; 95% CI: 0.24, 0.81] and who constructed their latrine looking at their friends [AOR: 0.35; 95% CI: 0.18, 0.68] were less likely to use their latrine. The extent of latrine utilization is high in the community. Further strengthening of implementation modalities giving due consideration for the aforementioned factors is highly recommended.
Key words: Latrine utilization, open defecation free, cross sectional, Ethiopia.

Open defecation free (ODF) is a term used to describe either community that has eliminated the practice of open defecation or households which no longer defecate in the open. It can be used to describe the actual state of having no open defecation or the point at which a community or household are declared to have reached this state (Water-Aid, 2009). Proper use of improved sanitation facilities can help to prevent the multiplicity of diseases that are transmitted through human faeces, including intestinal worms and other neglected tropical diseases (Taiji, 2012). Poor sanitation and water supplies are the engines that drive cycles of disease like  bacteria, viruses and parasites, which are major causes of diarrhea and other diseases (Water-Aid, 2009). Inadequate access to sanitation facilities resulting in the practice of widespread open defecation has a negative impact on the health of the community (Kamal, 2005). Poor waste disposal practices are responsible for a significant proportion of the world's infectious disease burden (WHO, 2003).
Globally, in 2010, an estimated 2.5 billion people were still living without improved sanitation and 15% of the population still practice open defecation, which represents 1.1 billion people (WHO, UNICEF, 2013). Open defecation is largely a rural phenomenon, most widely practiced in Southern Asian and sub-Saharan Africa (WHO, UNICEF, 2010). In sub-Saharan Africa, in 2010, 45% of the population uses either shared or unimproved facilities, and an estimated 25% practice open defecation (WHO, UNICEF, 2012). The region made the least progress, ‘having lowered the proportion of its population engaged in unsanitary practices by roughly 15% (Taiji, 2012). Unless the speed of movement of change in the sanitation sector is accelerated, the Millennium Development Goal (MDG) sanitation target may not be achieved until 2026 (WHO, UNICEF, 2013). In the WHO African Regions, 40% of Nigeria, Niger, and Cameroon people had no access to any kind of improved sanitation facilities (WHO, UNICEF, 2010).
Building improved sanitation facilities is a crucial health intervention to realize proper use and maintenance of the facilities and good personal and domestic hygiene. Sanitation facilities interrupt the transmission of fecal-oral disease at its most important source by preventing human faecal contamination of water and soil (WHO, 2003). Diarrheal disease is a major cause of death in sub-Saharan Africa due to lack of improved sanitation practice and those who practice open defecation are the riskiest group for sanitation related disease (Savadogo, 2013).
According to Ethiopian Mini-Demographic Health Survey (EMDHS) 2014 report the majority of households, 89% use non-improved latrine facilities (CSA, 2014), and 38% of households have no toilet facility. Most commonly used non-improved toilet facility is an open pit latrine or pit latrine without slabs was used by 57% of households in rural areas and 43% of households in urban areas and about 7% of households use shared toilet facilities (CSA, 2011).
In Ethiopia, about 60% of the current disease burden is the result of poor sanitation, and diarrhea among under-five children accounts for 15% of the total deaths (FDRE, MOH, 2005). Even though the government has placed two interventional programs, the introduction of health extension program since 2004 and community-led total sanitation and hygiene (CLTSH) programs, the changes that have been recorded so far have not brought change in latrine utilization as required (WHO, UNICEF, 2014; CDC, 2008; Barnard et al., 2013; Kema et al., 2012;  Paul et al., 2013). Therefore, it is believed that the gap in utilization required further study.
The objective of this study, therefore, was to determine the magnitude and to identify potential factors associated with latrine utilization in Wondo Genet district.

A community-based cross-sectional study was conducted in Wondo Genet district, Southern Ethiopia from March 2015 to April 2015. This study was conducted in Wondo Genet district which is located in Southern Ethiopia. Wondo Genet district has an estimated population of 154,510 and 30,215 households (Wendo Genete District, 2015). The capital town of Wondo genet district is Chuko, which is located at 24 km far from the regional state capital city (Hawasa). The district is divided into 14 rural kebeles (the lowest administrative unite in Ethiopia), and 2 rural towns. There are 13 health posts, 13 clinics and 3 health centers making health coverage of the district 63%. Because of governmental and non-governmental efforts made so far, the kebeles declared open defecation free.
The study population were all households in the district. The necessary sample size (n) was computed by single population proportion formula:

by assuming 95% confidence level of za/2= 1.96, margin of error 5%, design effect 2, proportion (p) of latrine utilization 61.2%  according to the previous similar study conducted, and non-response rate 5%. The calculated sample was 759. Multi-stage sampling technique was employed to select the study participants. Five kebeles (the lowest administrative structure) were selected randomly. The total determined sample size was proportionally allocated for each kebele’s and systematic random sampling (K=15) was used to select the final household.
A structured questionnaire supported with observational checklist was used to collect the required data. A face to face interview and observation of latrine usage was conducted to collect the data. The data collection instrument was first prepared in English language and then translated into Amharic and finally, it was retranslated into English by language experts to check its consistency. Data collectors with diploma and B.Sc. rank and three supervisors which had B.Sc. in Environmental health were selected and trained. A pre-test was done before engaging in full implementation of data collection by taking 5% of the sample size in kebeles adjacent to the study kebeles for assuring data quality.
Data were entered to Epidemiological Information (EPI-INFO) software version 3.5.1 and analyzed by Statistical Package for Social Sciences (SPSS) software version 20. A backward binary logistic regression model was used to identify factors associated with latrine utilization. Both Crude Odds Ratio (COR) and Adjusted Odds Ratio (AOR) were used to show an association between hypertension and selected variables at 95% confidence interval (CI). Variables having a p-value≤0.05 in the final model were assumed to be significant determinants. Model fitness test was checked by the Hosmer and Lemeshow goodness of fit test. 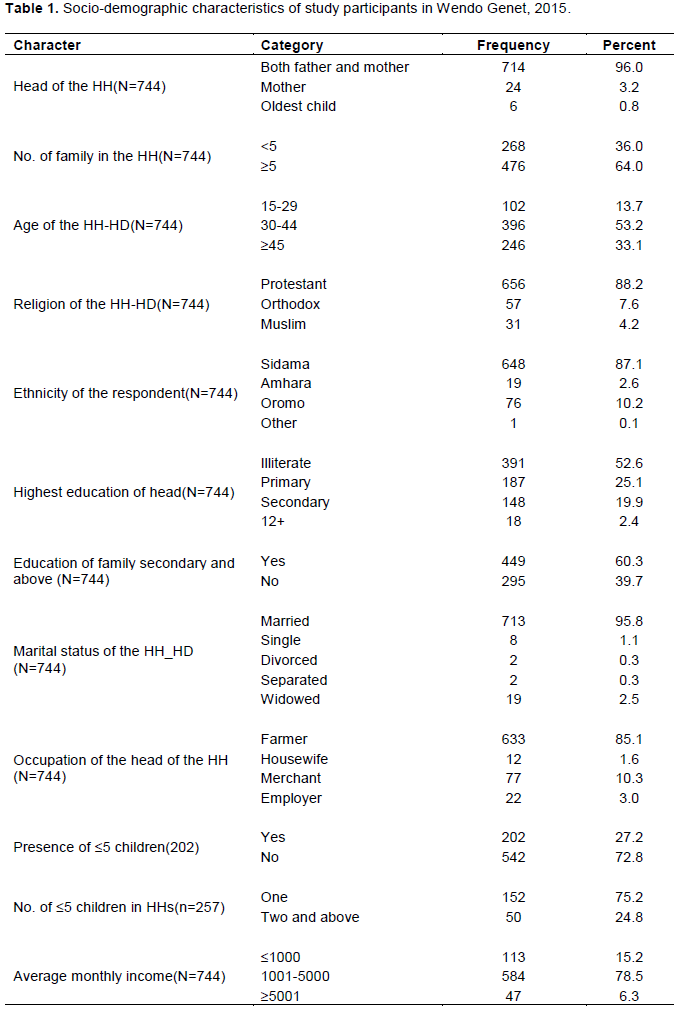 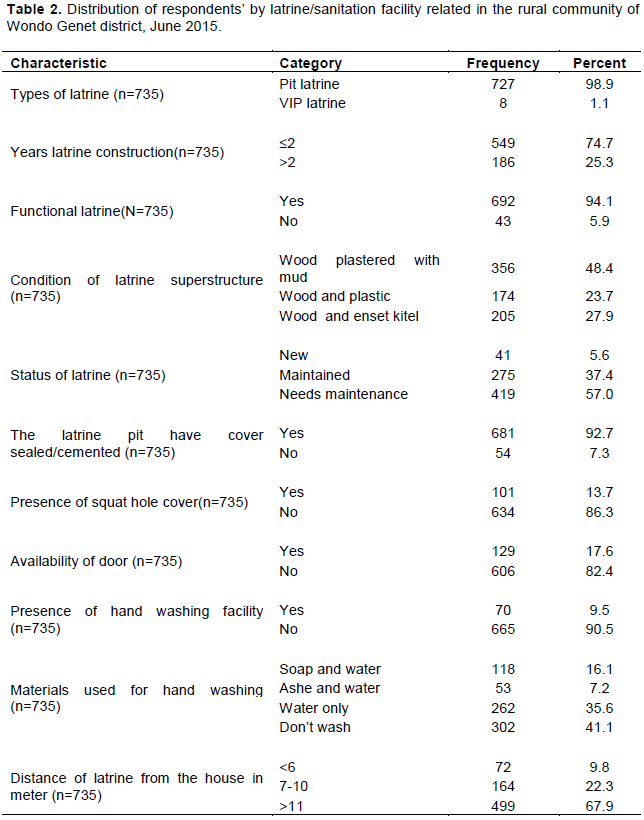 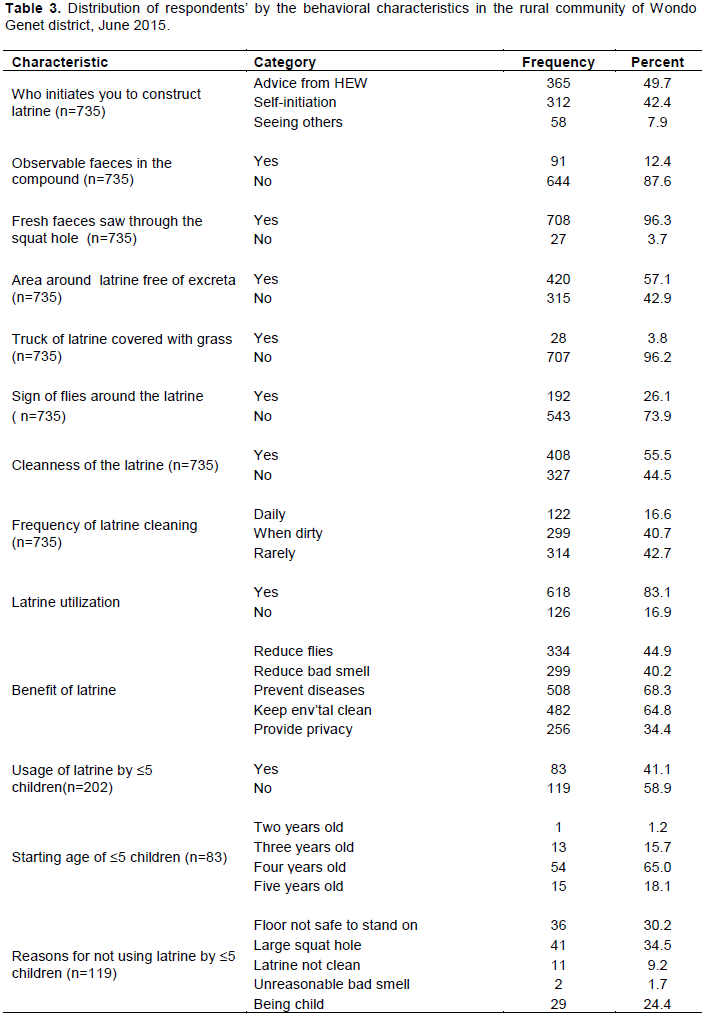 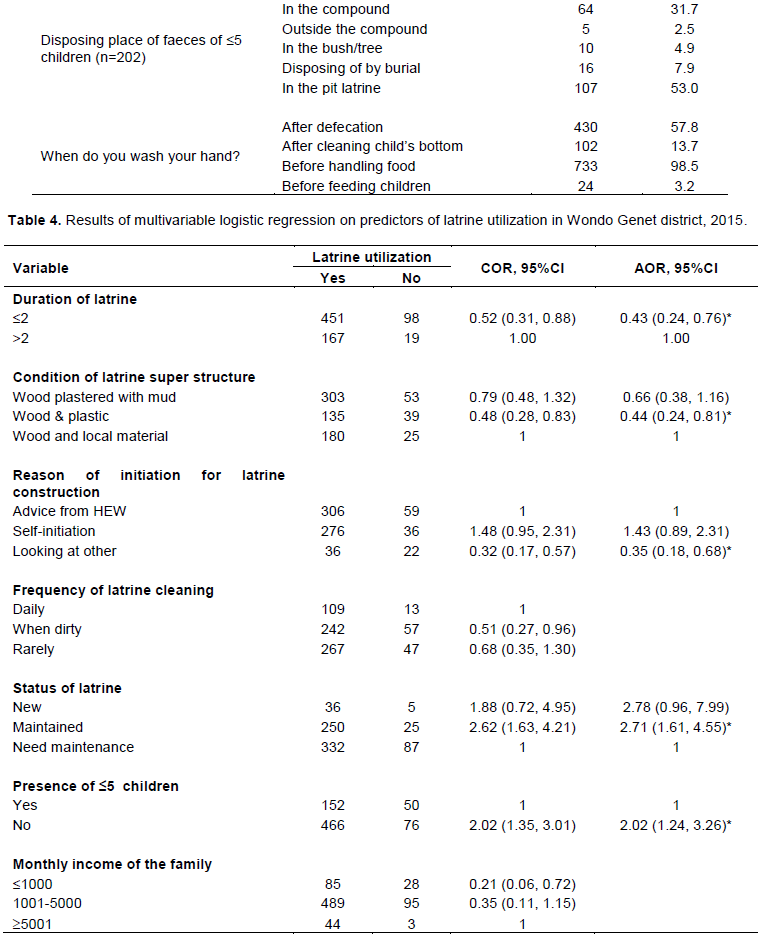 Sanitation facilities must be properly maintained to function properly and the use of inappropriate materials for latrine construction leads to the collapse of the latrine due to various reasons (such as loose soil condition, flooding, etc.) necessitating frequent maintenance (Debesay et al., 2013; FDRE, MoH, 2004). In this study, the odd of latrine utilization was 2.71 times higher among a household who had a maintained latrine. The finding of this result was consistent with a study conducted in Awabel district (Awoke and Much, 2013). In this study, 56.2% of the latrine facilities need complete maintenance and repair of their superstructure. This figure was similar to study conducted in Bahir Dar Zuria district (56.9%) (Tefera, 2008) and lower than the finding by Hawzien district Tigray (69%) (FDRE, MoH, 2010).
According to the data observed in this study, utilization of latrine was affected by the condition of latrine superstructure; those households whose latrine superstructure was  made  from  wood  and  plastic  were 55.6% less likely to utilize their latrine. The cost of using locally available materials would help the households to construct their latrine easily and to use them as well. This finding is in line with a study conducted in Awabel district (Awoke and Muche, 2013). Since the study is on utilization of latrine, recall bias and social desirability bias might have overestimated some of the findings.

The University Gondar College of Medicine and Health Science and Southern Nations Nationalities and People Regional Health Bureau are acknowledged for the financial support. The field supervisors, data collectors, the study participants and health department of the administration are appreciated for the support during project implementation.