Sexual abuse of children is very prevalent in Ghana. The pandemic has been a worrying phenomenon to parents, community leaders and government in recent years because of increasing cases of the phenomenon. This study purposed to determine the common causes of child sexual abuse and the effect on children. The study also concerned itself with community knowledge, attitude and care toward child sexual abuse. Data were collected from May to June 2019. 500 opinion leaders were used for the study because of their special role as communicators and leaders in community issues. Adopting a cluster sampling technique, the author conducted a household survey on 25 communities using a five Likert scale questionnaire. Analysis of data was by the factor analysis which was used to assess associations between factors and community orientation towards sexual violence against children. The study identified weak family structure, low level of education, family’s inability to meet children economic needs and age as the common factors of child sexual abuse. The study again found withdrawal from family and friends and some physical disorders as effects of child sexual abuse. Also, it was clear from the study that community’s orientation is measured by its knowledge, attitude and care of the children. Another significant finding was that community’s knowledge and concern for children promote community orientation and subsequently reduce child sexual abuse and its associated outcomes. The study recommended to one toward care and attention to children at the community level, and strict application of sanctions against offenders at the local and national authority levels. 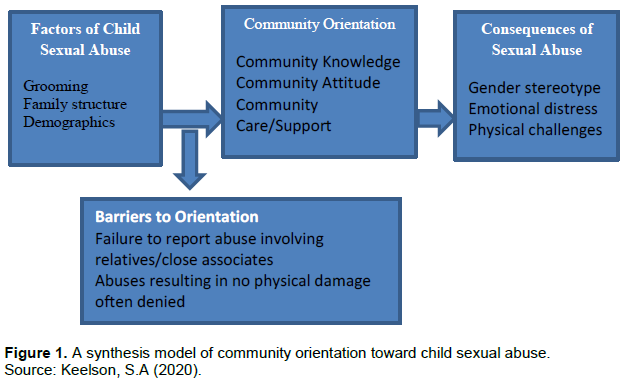 The scope of study is Central Region of Ghana with a population of about 2.56 million of which 42% were 16 years or younger (Statistical Service Estimates, 2019). The choice of the region for the study is because of its recent continuous reports of abuse of children, some even less than 5 years.
This has put the region in the limelight as a notorious area for child sexual abuse in the country. The sampling unit of the study included opinion leaders of the target communities. Opinion leaders were used as unit of analysis because of the information role in society. Cluster sampling was used to select 25 communities from the about 200 communities. The sampling method devoted to the study was to enable the researcher select communities in clusters using community size, urbanization and level of commercial activities. Opinion leaders were classified by their community affiliation, religious affiliation and educational affiliation. Then, stratified sampling technique was used to select respondents from the three strata of opinion leadership, while we used ‘leads’ in the communities to trace informants.  500 respondents were selected from the communities and used Likert scale questionnaire for data collection.  The study used factor analysis technique for data analysis. Factor analysis is a statistical method used to describe variability among observed, correlated variables in terms of a lower number of unobserved variables called factors. Factor analysis (including common factor analysis and principal component analysis) helped to examine the interdependence among variables and to explain the underlying common dimensions (factors) for the correlations among the variables. The procedure allowed the researcher to condense the information in an extensive set of variables into a smaller set of variables by identifying some underlying dimensions and variables that influence them. The study could therefore look upon the underlying dimensions or factors, which are of primary interest but unobservable, as the additional set of variables. Factor analysis facilitates the transformation from the original observable variables to the new variables (factors) with as minor loss of information as possible (Everitt and Dunn, 2001).

Table 1 shows the KMO measure and the results of the Bartlett’s test, which are used to judge the adequacy of the sample size and whether the correlation matrix is suitable for factor analysis. Both the KMO value of 0.734 (which  is  greater  than  the  minimum  threshold  of  0.50 (Sharma, 1996) and the Bartlett’s test ? value of 0.000 suggest the sample size is adequate and that, at least, some variables are inter-correlated and therefore the data were suitable for factor analysis.
Table 2 shows the initial and final (Extraction) communalities in PCF, all variables assigned are initial variance (total communality) of one, as stated in the Table 2. The final (Extraction) communalities of each variable represent the variance accounted for by the chosen factor solution for the variable. Twenty-two variables remained in the ultimate factor solution out of the 32 variables at the start of the analysis. The other ten were removed from the analysis because their communalities were less than 0.50 or they were cross-loading (loading on over one factor) in the preliminary analysis. From Table 2, all the final communalities are at least 0.50. At least 50% of the initial communality of each variable was accounted for in the final factor solution. The factor solution is considered being satisfactory as at least half of the variance of each variable is shared with the factors.

This paper reports on the results of an investigation aimed to understand what factors affect child sexual abuse in the central region of Ghana, and how community orientation influences such factors to contribute to certain outcomes. A questionnaire including, 32 items that used a five-point differential scale. it subjected a sample of 500 respondents who were opinion leaders to factor analysis. The KMO value of 0.73 and the ?-value of 0.000 for the Bartlett’s test of sphericity meant that the data was suitable for factoring. Combining three criteria to decide on the number of factors to retain for interpretation, the author arrived at an eight-factor solution, which accounted for 64.9% of the original variance in the data. A minimum threshold of a loading of 0.50 was used to include only variables with practical significance in the final factor solution, which resulted from rotating the initial factor solution by the Varimax method, ensuring that the factors in the final factor solution are uncorrelated. The dimensions adduced to be influencing the community orientation of child sexual abuse were: Family structure, Grooming, Consequences, Demographics, Moderators, Community knowledge, Community care/support and Community attitude. Community leaders and governmental authorities can focus on these dimensions as they strive to manage the child sexual abuse pandemic in the communities.
What makes this study different is that as far as the researcher is aware it is the first study to adapt marketing concept to study child sexual abuse in a manner such as this. It is also the first of its kind to have a synthesis study of community orientation and child sexual abuse to highlight factors, and consequences of child sexual abuse, and community’s responsibility in such detail. The current study is the first to develop a model of community orientation toward child sexual abuse.
The study showed that the communities with good knowledge on factors and consequences associated with child sexual abuse are more likely to manage and reduce abuse cases. The findings have important implications for interventions aimed to have a positive attitude toward child sexual abuse and offer appropriate support both at the community level and the government level. The results highlight the challenges associated with changing attitudes towards child sexual abuse and found women as those who need the highest levels of support. Support for the vulnerable and victims and appropriate sanctions for offenders by the communities and local government authorities would be commendable. Again, researchers can use the synthesis model to expand the frontiers of knowledge in the study of sexual abuse. However, the study uses only one region in Ghana. This begs from generalizing the results to different community and cultural settings. Thus, future studies could consider cross-cultural and cross-country studies to support generalisation. The study’s informants were only opinion leaders. While it is known that these have influence in the society, further studies may consider adding parents, guardians and even some sexual abuse victims.