Women in nonfarm rural employment: implications on the social and economic empowerment of rural women in Uganda

Nonfarm employment is an increasing form of employment in rural areas in Sub-Saharan Africa. This is partly because many of the workers in developing countries especially in Sub-Saharan Africa are self-employed workers.  Most women in Uganda do not own land since customary land ownership system deprives women of owning land. This has pushed women to nonfarm employment in urban areas, semi-rural, and rural areas. This paper explored the implications of nonfarm rural employment on the social and economic empowerment of women in rural areas. The findings revealed that nonfarm rural employment boosts women’s income, puts women in leadership positions in women’s groups such as the savings groups, and empowers women to become independent by reducing economic dependence on men or their husbands while also providing women with decision making power both in the community and households. Additionally, successful women in nonfarm employment, especially self-employed women, are role models and a motivation to other rural women to venture into nonfarm employment. Being successful as a woman in nonfarm employment also comes along with leadership roles and high social status in the community.

In developing countries, the majority of the population is still employed in the agricultural sector and especially in farm agricultural activities (Djido and Shiferaw, 2018; Lanjouw and Lanjouw, 2001). However, the growth of nonfarm activities in rural areas in developing countries has increased (Van den Broeck and Kilic, 2019). Nonfarm activities in rural areas include vending or operating small rural shops, selling clothes and shoes, operating restaurants, buying produce from farmers, transport services, salon, and hairdressing, repair services for different things, etc. Africa is rapidly urbanizing (Adams and Opoku, 2016; Birch and Wachter, 2011) and with urbanization taking place, the rural economy must be impacted and one of the major impacts that can be attributed to urbanization in Africa is the expansion of the rural nonfarm economy which includes services in the rural areas. Uganda is still mainly an agricultural economy and the population that depends on agriculture especially farm employment still high. There are still several people not directly employed in farms but are involved in the agricultural sector indirectly for example acting as middlemen who transport agricultural products, buying agricultural products from farmers, selling pesticides and seed varieties etc.

Although the rural nonfarm economy is dominated by men, women engagement in nonfarm economy has been growing over time, with women playing a very important role in nonfarm economy (Ackah, 2013). The nonfarm economy is expanding in several countries of Africa as the continent continues to witness population increase and urbanization (du Toit, 2019; Nneka and Rafiu, 2020). Nonfarm economy is an employer of many, especially those with entrepreneurship skills (Ahmed and Nwankwo, 2013; Igwe and Icha-Ituma, 2020). Nonfarm rural economy therefore directly employs entrepreneurs, while on the other hand, it provides employment opportunities to those employed by the entrepreneurs. Women entrepreneurs in rural areas engage in nonfarm economy as own-account workers or self-employed workers who employ others too.  In Africa, few women own lands, despite the majority of the women staying in rural areas (Adeniyi, 2010). Women can own the land upon purchase of land but many women in Africa are poor, which further makes them vulnerable. The option of engaging in nonfarm employment either as entrepreneurs or as workers working for others in rural areas can be a foundation for women to own assets and other properties. Land ownership rights in several African societies place women in precarious situations (Meeker and Meekers, 1997; Tripp, 2003). Women find themselves in situations where they work hard on farms yet they have little or no decisions over the produce from the land. They have no ownership of what is produced and therefore men determine the appropriation of the benefits from the land. Women must explore other alternatives through which they can have decision making powers over what they do. Nonfarm employment can be an alternative for women to escape precarious situations of laboring on land or farms for long hours yet in the end they have no ownership rights over what is produced. Cultural set up of society gives men an upper hand in the ownership of properties like land which makes it hard to break such cultural beliefs. This makes efforts to empower women in rural Africa quite hard to achieve the intended targets. In rural areas, women are limited from participating in nonfarm employment because of gender stereotypes (Esuruku, 2010; Shema and Mutarindwa, 2017). Nonfarm employment can therefore, play an indirect or direct role in women’s empowerment and emancipation.
Women in sub-Saharan Africa have exhibited great entrepreneurship potential (Chinomona and Maziriri, 2015; Langevang and Gough, 2012). Although women face several challenges, there is an increase in entrepreneurship among women. In Sub-Saharan Africa, entrepreneurship and nonfarm employment are closely related because in several cases entrepreneurs venture into nonfarm activities, especially as self-employed workers.  African women are involved in several small-scale businesses where they are own-account workers in rural, semi-urban, and urban areas. Nonfarm employment is therefore stimulated by entrepreneurship and self-employment.
From the literature reviewed in this paper concerning women in the rural nonfarm economy, empirical research or previous studies indicate that women are increasingly getting involved in the nonfarm rural economy and their contribution cannot be underestimated. This paper, attempts to answer the question: What is the role of nonfarm employment in the socio-economic empowerment of rural women in a developing country like Uganda? To answer this question, data was collected from a typical rural setting in Uganda from women who are employed in nonfarm employment. It is worth mentioning that Uganda is mainly an agricultural economy with the majority of the population living in rural areas (Mukwaya et al., 2012). This means that the rural economy plays an important role in the livelihoods of Ugandans as the major employer and contributor to Gross Domestic Product (GDP).

To understand the experiences and choices of women employed in nonfarm employment, we used individual semi-structured in-depth interviews for data collection. The participants were identified through a snowball purposive random sampling technique in which participants were able to recommend other participants for the study. One of the authors of this paper whose relatives reside in Busolwe west sub-county in Butaleja district made the initial contacts and she got the first two participants who were ladies that own retail shops businesses, through these two ladies we got recommendations for other participants and the chain continued until we had the required number of participants for the study. In total 20 women were interviewed, and the age range of participants was 19 to 36 years. The participants were all from Busolwe West Sub-county in Butaleja district in Uganda. The participants’ responses were recorded and transcribed during the data analysis process. The participants engaged in nonfarm activities employment that included selling food items in the market, selling clothes and shoes, operating small restaurants, operating Mobile Money, sewing, operating small retail shops dealing in several items, operating bars, buying produce from farmers, etc. In addition, we also observed the daily lives of some participants both at their workplaces and at their homes. This helped us understand their experiences of working as nonfarm workers and their roles in the community. 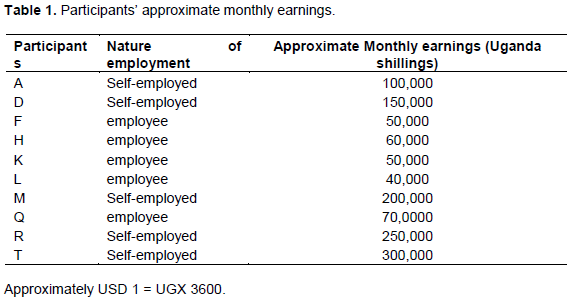 Nonfarm employment is a strong empowerment tool for women in rural areas both economically and socially. Economically, it reduces women’s dependence on men for their financial needs and enables women to save small amounts of money which they can use to invest in smaller businesses that expand their incomes, also part of the money can be useful in buying assets and properties including land in the long-run. Socially, nonfarm employment for rural women offers an alternative to start-up small businesses that they own and have control over. These businesses empower women to participate in decision making for their enterprises and gain social status because of the ability to help others in the community. The women also inspire other women to move away from farm employment to nonfarm employment which has a positive effect on women’s empowerment and emancipation. Nonfarm employment therefore, breaks stereotypes and social or cultural beliefs that keep women dependent and vulnerable in the society. For rural women, nonfarm employment can be boosted by increasing their savings groups. Therefore, state, and non-state actors should concentrate on boosting such groups while giving freedom to the women to do what they can do or are good at. In several cases, women’s savings groups have received money from state and non-state actors but directed to specific activities which the women have little or no interest in doing. Understanding the interests of women in rural areas is important in designing tailor made policies and interventions for empowerment and emancipation of women.