The information at a global level show that access to basic drinking water services is increasing since the 2000 (UNICEF and WHO, 2019). For example, the global population with access to at least basic drinking water services increased from 82% out of five billion people in 2000 to 90% out of 6.8 billion people in 2017 (UNICEF and WHO, 2019). Even though, there are inequalities between developed and developing countries, and also between rural and urban areas. Urban areas are better off in terms of accessing clean and safe drinking water from improved sources compared to rural areas (UNICEF and WHO, 2019). This implies that the world has a long way to go in terms of realizing fully the ambitious goal of Sustainable Development on achieving ‘universal access for all and leaving no one behind by 2030’. Efforts to improve access to clean and safe drinking water in Tanzania date back to the 1970s when the country implemented the socialism and self-reliance policy. During that particular period, the Government of Tanzania aimed to ensure that by 1990s all households could have access to safe drinking water within 400 meters (Sangea et al., 2018). As a country, Tanzania is endowed with abundant natural water sources mainly rivers and lakes (Figure 1). While most of rural areas in Tanzania depend on groundwater from communal boreholes for drinking water supply, urban areas depend on piped water supplies from groundwater sources. This implies that groundwater is critical for the living in Tanzania; and therefore needs governance to ensure sustainable supply and management. With that Tanzania has developed water governance mechanisms (Seward, 2015; URT, 2002; Murad, 2014). 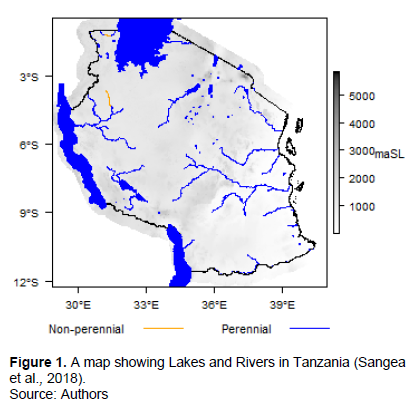 In Tanzania, available information shows that by 2015, about 46% of the rural population had access to safe drinking water compared to 77.2% of the urban population (Sangea et al., 2018; Mgoba and Kabote, 2020). According to URT (2002) utilization and governance of water in Tanzania is regulated by statutory and customary laws. Maganga (2004) provides detailed information about customary norms and statutory laws for implementing Integrated Water Resource Management (IWRM) in the country since colonialism. The National Water Policy (NAWAPO) of 2002 emphasizes decentralized water governance in the country. This aims to ensure effective communities’ participation in the water sector (URT, 2002; 2009; Zaag and Savenije, 2014; FAO, 2016). The NAWAPO and Water Supply and Sanitation Act No. 12 of 2009 consider Community Owned Water Supply Organizations (COWSOs) as the legal water governance actor at a local level in Tanzania. Other crucial water governance actors include village governments and Water Users Associations (WUAs) (Kabote and John, 2018).

The study was conducted in Njombe District, Njombe Region, Tanzania (Figure 2). Data for this study were collected between September and November, 2019. The District is divided into three district councils namely: Njombe Rural District Council, Njombe Urban Council and Makambako Town Council. The District receives an annual average rainfall of 1 500mm (Madzengo, 2014), and it is characterised by a typical unimodal climate, that receives rainfall between November and April. The maximum monthly temperature is below 23.5 °C almost all months, excluding November and December in which the average temperature is 24.7°C. The minimum temperature ranges between 12 and 15°C from November to April, and is lower than 8 °C during June and July (Mtongori et al., 2015). The water sources in the District  include river Ruhuji and natural springs (URT, 2016). A number of water projects have been established for water supply in the district, and by 2016, the Njombe district had 65 water projects, 35 of them dealt with groundwater (URT, 2016). This implies that groundwater sources account for 53.8% of all water projects and therefore the district was a proper case to explore groundwater governance principles (Table 1). 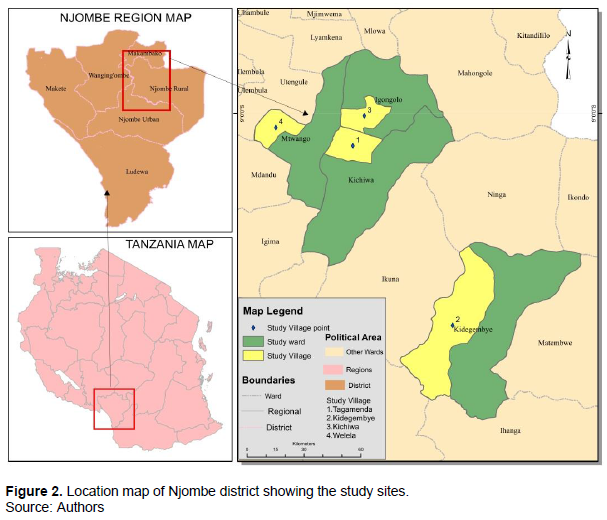 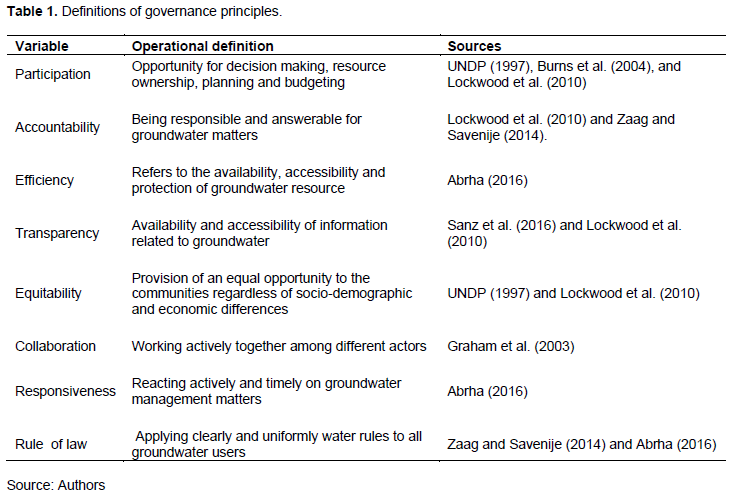 The study adopted cross-sectional research design with a mixed method approach combining quantitative and qualitative techniques. The aim of the mixed method approach was to triangulate data collection methods as argued by Creswell (2014). Cross-sectional research design was adopted to explore information about governance principles. Purposive sampling was used to select Makambako and Lupembe divisions and four wards of Mtwango, Kichiwa, Igongolo and Kidegembye. The criterion for selecting divisions and wards was availability of groundwater points. The information about availability of groundwater points was obtained from Rural Water Supply and Sanitation Agency (RUWASA). Purposive sampling technique is recommended in social sciences because it focuses directly to an appropriate area for a study (Kothari, 2006). One village from each ward, making four villages, was selected using simple random sampling. The sampling frame comprised of 670 households of the study villages. From the sampling frame, a total of 250 head of households and spouses were selected using simple random sampling. The total sample size was determined by using the Yamane (1967) formula. One of the assumptions of the Yamane formula is that the population size should be finite. The Yamane (1967) formula is expressed as:

Substituting the total number of households and the level of precision into equation 1, we get the total sample size equals to 250. In order to ensure that the number of sampled households in a particular village was proportional to the total number of households, a proportionate sampling was deployed by using equation 2, and the sample size per village is shown in Table 2. By substituting the values into equation 2, we get sub-samples as shown in Table 2.

a structured questionnaire. The copies of questionnaire were administered to the household heads and or spouses who responded to the questions. This tool generated data related to, among others, the respondents’ socio-economic and demographic characteristics and governance principles. Qualitative data were collected through Focus Group Discussions (FGDs) and key informant interviews. One FGD was conducted in each village making a total of four FGDs. Each FGD comprised 7 to 9 groundwater users making a total of 32 participants. The proportion of women participants ranged from 4 to 6 per group. Qualitative data are useful in explaining quantitative data (Creswell, 2014). A total of 9 key informants, mainly leaders, from COWSOs, Village Government Authorities (VGAs) and RUWASA were involved. Both FGDs and key informant interviews were guided by a checklist of items.

Qualitative data were analysed using content analysis. This involved transcription of information. For quantitative data, the variables of governance principles were assigned points based on a five-point scale, that is strongly agree (5 points), agree (4 points), neutral (3 points), disagree (2 points) and strongly disagree (1 point). During data analysis, the five-point scale was collapsed into a three-point scale, which is agree, neutral and disagree in order to ease interpretation. Then, the total number of respondents for each statement was counted to get the percentage distribution for agree, neutral and disagree. According to Pallant (2007), a three-point scale is appropriate for measuring social attributes such as attitude, awareness, perceptions, and knowledge. The One Way Analysis of Variance (ANOVA) was used to compare mean distance in meters from households to the groundwater points. The following formula as used by Ostertagova and Ostertag (2013) was adopted to calculate the mean distance.

ANOVA is a useful statistical technique that compares the mean difference for more than two groups (Pallant, 2007). In this study, villages are considered as independent groups. SPSS version 20 was used to generate descriptive statistics of respondents’ socio-economic and demographic characteristics. SPSS was also used to compute percentage distribution.

The results show that exactly 50% of the respondents were females. In relation to age groups, 56.4% were between 40-59 years old. This indicates that the study area had active labour force. The results also show that 94% of the respondents depended on farming that was also a main source of income. Others depended on small scale businesses like tailoring, bricks making, and crop selling (Table 3). This implies that livelihood of the majority depended on farming. Welela, Kichiwa and Tagamenda villages mainly produced food crops whereas Kidegembye produced cash crops like tea and trees for timber production. According to URT (2018), agriculture provides employment to 66.3% of the Tanzanians. In addition, majority (68%) of the respondents had primary education whereas 20.4% had secondary level of education (Table 3). The results in Table 4 show that the mean age of the respondents was 43 years. This implies that majority of the respondents were adults. The mean number of persons per household was 5.6 higher than 4.9 persons reported at the national level in Tanzania (United Nations World Food Programme and World Bank, 2013) as well as 4.2 persons reported in Njombe District (URT, 2016). 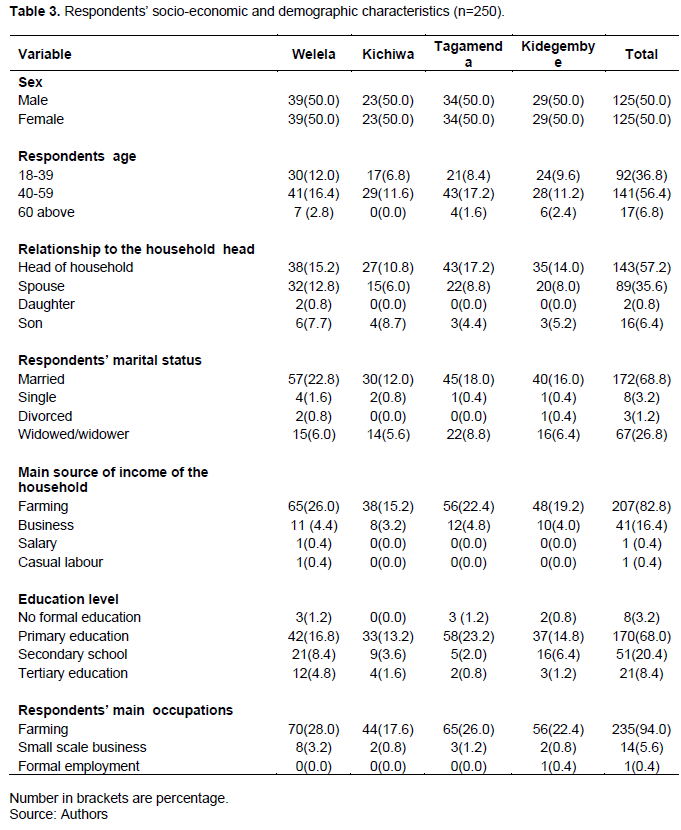 The results on groundwater governance principles are presented in Table 5. About participation, 73% of the respondents participated to formulate by- laws in their localities. In some cases, the communities were represented by COWSOs in making by-laws, which is a legal actor for water governance in Tanzania. In addition, respondents showed a sense of ownership of groundwater points. With regard to accountability, the results show that five out of six statements of the accountability principle were poorly practiced (Table 5). This is because COWSOs did not work openly in terms of sharing success, challenges and progress on financial accounting with the communities of groundwater users. 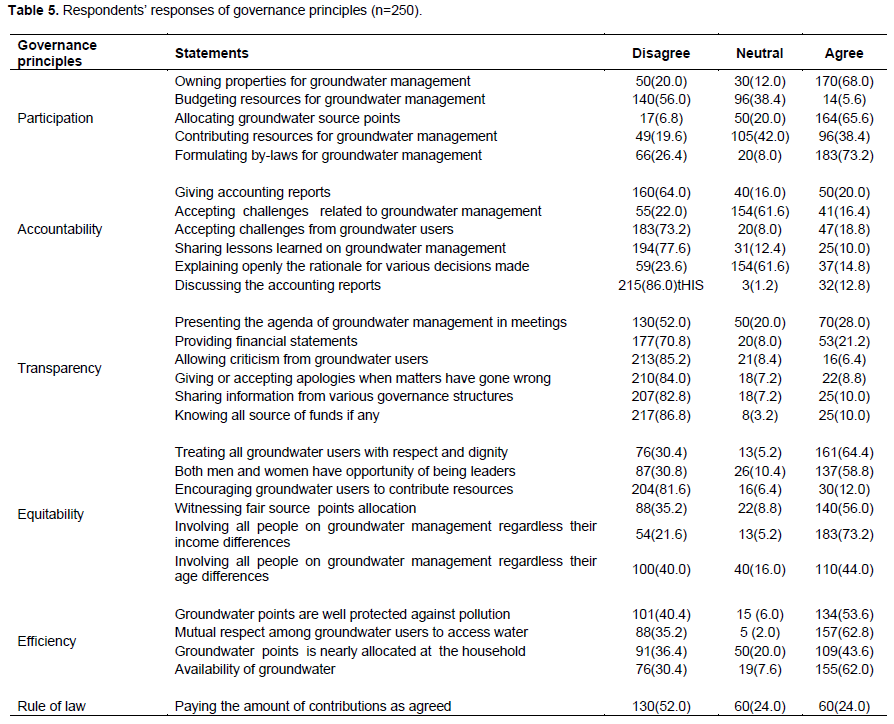 On equitability, which is a state of providing equal opportunity to the communities to access groundwater information, 73.2% of the respondents were involved on groundwater matters regardless their  income  differences;  and 64.4% agreed that all groundwater users were treated with respect and dignity to access groundwater points (Table 5). Other statements, which were well practised, include opportunity for men and women to hold leadership positions in COWSOs and fairly allocation of groundwater points in the communities (Table 5). This implies that equitability was effectively practised in the study area, possibly because most of the groundwater points were public and therefore everybody had an equal opportunity to access the water. The results are not in agreement with those of Mandara (2014); Nganyanyuka (2017); and Sudi et al. (2019) who argue unequal women leaders in water governance actors like COWSOs in some parts of Tanzania suggesting that more job in terms of equitability needs to be done. Furthermore, the results showed that protecting groundwater points against pollution, accessibility of water by groundwater users and availability of groundwater were efficient (Table 5). This is explained by a reason that all groundwater points were covered to protect contamination, and the water was accessible to all households. Using ANOVA, the overall  mean distance from households to groundwater points was 399 m (Table 6). This implies that groundwater was accessible close to the households within a distance of 400 m recommended by the National Water Policy of Tanzania of 2002 (URT, 2002). This is in line with Comte et al. (2016) and Ngasala et al. (2018) in terms of accessibility of groundwater.

The authors are thankful to groundwater users, village governments and other groundwater governance actors who participated during the data collection for this study.