An overview of epidemiology and etiology of bacteria associated with diabetic injuries and their dominant infection at Central Region, Riyadh, Saudi Arabia

Diabetes mellitus (DM) is one of the most chronic and dangerous diseases worldwide and in the Saudi society in particular. Swabs (168) from DM injuries were collected from inpatient and outpatient departments. Analysis of variance revealed the high incidence of diabetic foot infections compared to other injuries by an average of 51 and 33, respectively. Adults’ category was significantly the highest age category in the incidence. Inpatients have recorded the highest incidence than outpatients, while routine cases have recorded the highest rates of infection compared to the urgent and very urgent cases. Etiology was confined in 210 bacterial isolates belonging to gram negative (G-ve), gram-positive (G+ve), aerobic and anaerobic bacteria. The study detected a high incidence in one genus/swab compared to two, three, four genera and polymicrobial/swab, with 67, 14, 1, 0.5 and 1.5% respectively. Aerobic bacteria reached 98.5% compared to anaerobic bacteria (1.5%). G-ve aerobic bacteria were highly significant compared to the G+ve. The dominant bacterial species in diabetic injuries was Pseudomonas aeruginosa followed by Staphylococcus aureus with a rate of 28 and 17%, respectively. It is worth noting that the antibacterial ability was evident in Ps. aeruginosa for the most bacterial isolates tested, and this reinforces the result found in the study of Ps. aeruginosa’s dominance in diabetes compared to the rest of the isolated bacterial genera. Results of the study are considered unique in the epidemic spread of diabetic injuries for inpatients, outpatients, as well as the antagonistic relations of each bacterial etiology of diabetic injuries in Saudi Arabia.

Diabetes mellitus (DM) is a chronic disease that is widespread in the world. In Saudi society, in particular, the rate of diabetes in 1985 was estimated to be 5%, which reached 13% in 2000. Recent data from Saudi Arabia shows that the prevalence of type-2 DM reached 25.4% in 2014 (Al-Rubeaan et al., 2015). Moreover, there were 3.4 million cases of diabetes in 2015 (IDF, 2015), which means it is a continuous increase in Saudi Arabia, due to the lifestyle leading to higher incidence of DM (Al-Sobayel et al., 2014). Many studies have been conducted on the Saudi populations with risk factors for complications from diabetic foot (Al-Wakeel et al., 2009; Hu et al., 2014; Zahrani et al., 2014). Diabetic foot injuries are the most frequent  (Currie et al., 2009), and lead to more severe complications for diabetic patients, by progressing to foot ulcers at some time in their lives (Singh et al., 2005). Moreover, diabetic injuries exposed to bacterial infection (Espinosa et al., 1999) mainly, compared to injured persons who are not diabetics (Reiber, 2001) lead to inflammation and destruction of the tissue, and can lead to amputation of the lower limbs.

Swabs were collected from 168 injuries who are suffering from diabetes mellitus in Riyadh Medical Complex, Ministry of Health, Central Region - Riyadh, Saudi Arabia, from September 5th, 2005 to January 30th, 2006.

Recommended methods in Medical Complex were followed such as sterilizing the place of taking the sample by using 70% of ethylic alcohol or iodine or quaternary ammonium compounds or chlorine hexedine. Swabs were cultured immediately at their arrival to Central bacteriological Laboratory on the following media: Blood agar, chocolate agar, MacConky in CO2; the plates were incubated overnight at 37ËšC in O2 incubator. Pure colonies were checked in morphology, microscopic examination (gram stain, spores, and motility). Also, biochemical tests based on API-Staph system and API-tests 20E and API-20Strep (GHL, 2013) were used to identify the bacterial species. Furthermore, some differentiating tests were used such as: Catalase, Optochin Disk, Staphrex, Bile Aesculin hydrolysis, and Oxidase test by the methods used by Holt et al. (2000), and Murray et al. (2003).

It is worth mentioning, that wound swabs include the following data: Sex, age, place of isolation, hospital departments and bacterial isolates from injuries and on this basis we examined the different relationships associated with the epidemiological spread of the disease in the central region, Riyadh, Saudi Arabia.

Genera and species have been tested for their antagonistic effect depending on the method of Shoeib (1995). The antagonistic effect of the isolated bacterial species from the diabetics’ injuries was measured as the inhibition area resulting from growth.

Data were analyzed by SPSS (2006) Program: frequencies and percentages, the means and standard deviations, the analysis of variance and Duncan test.

Regarding the gender difference in the study, the results showed that the number of the males suffering from diabetic injuries was more than the females; where the number of males was 137 out  of  168;  while the number of females was 31 out of 168, at a rate of 4.4:1 respectively.

Amputations cases reached 13 cases out of 168 representing 7.14%; 10 cases of them were males, and 3 were females; 10 cases were below the knee amputation and 3 cases of toe amputation.

Statistical analysis of the data showed that the proportion of males with diabetic injuries was significantly higher (P <0.01) than the proportion of females (27.4% and 6.2% respectively). There was also a significant effect (P <0.001) for age categories (Table 2), where the adult category was higher- according to the incidence (%55.5). Moreover, then came the four categories (adolescent, children, elderly, suckling) with an equal average statistically proportions (14.5, 7, 5.5 and 1.5%, respectively).

Considering the results of the analysis of variance, it was found that the number of infected males was significantly higher (P<0.05) than the number of females with an average of 27.6 and 6% respectively.

Patients’ cases were divided in terms of their importance into three categories of cases: Routine, urgent, and very urgent.  Analysis of variance (Table 4) has shown that there is a significant difference (P<0.01) in the proportion  of  the  importance  of the condition of patients with diabetes in Riyadh Medical Complex.  The routine cases were significantly higher (72%) followed by the other two types (Urgent and Very Urgent)  in static equal proportions (10.5 and 1.5%, respectively) where there is no significant difference between these two categories. It has been observed that the number of infected males was significantly higher (P<0.05) than the number of infected females (45.6 and 10.3%, respectively).

The relationship between diabetic injuries and bacterial etiology

Multiple bacterial species for each swab

The dominance of bacterial species

According to the standard tests recommended, G-ve and G+ve bacteria genera and species had been identified (Table 7); also the fungus Candida tropicalis of the yeasts was isolated. Throughout the study,  it was found that the bacterial species  mostly  associated with injuries was the rod bacterium of Ps. aeruginosa (G-ve); it amounted to 56 out of 210 isolates with an average of 26.7%, followed by spherical bacteria of S. aureus (G+ve), comprising 34 isolates out of 210 with an average of 16.2% (Table 7). 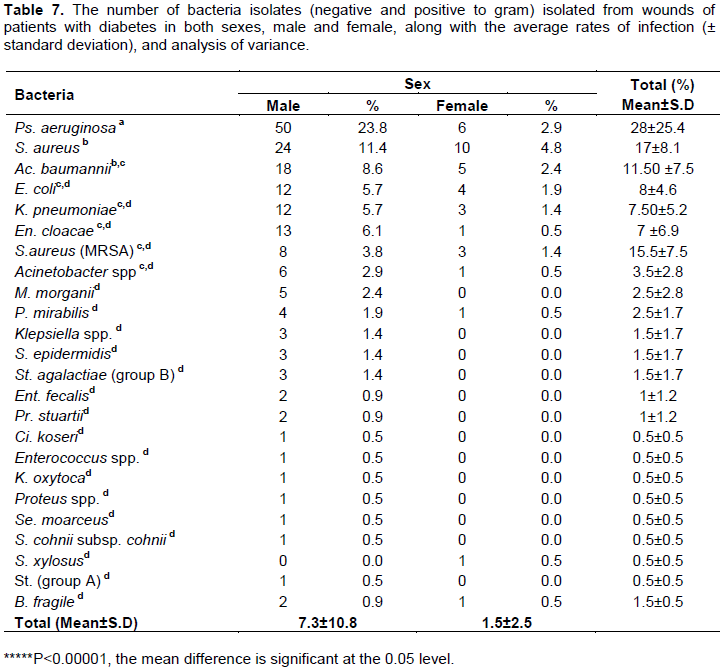 Diabetic injuries and its associated genera with Ps. aeruginosa

Due to the dominance of Ps. aeruginosa in diabetic injuries, species associated with it have been studied (Table 8). Analysis of variance showed significant difference (P<0.00001) of the presence of Ps. Aeruginosa by repeating 33 cases out of 56 cases in this bacterium alone (58.8%). Ps. aeruginosa was associated with En. cloacae, where the number of cases was 8 cases representing 14.2%. This bacterium was accompanied by other bacterial species (K. pneumonia, Klebsiella spp, P. mirabilis, S. aureus + Bacteroides fragilis, S. aureus + Ac. baumannii + B. fragilis) separately in one case at a rate of 1.8% and in equal proportions that were statistically significant. The high incidence in males than female significantly (P<0.00001) [average incidence in males (4.5) compared to 0.5 in females] was recorded (Table 8). 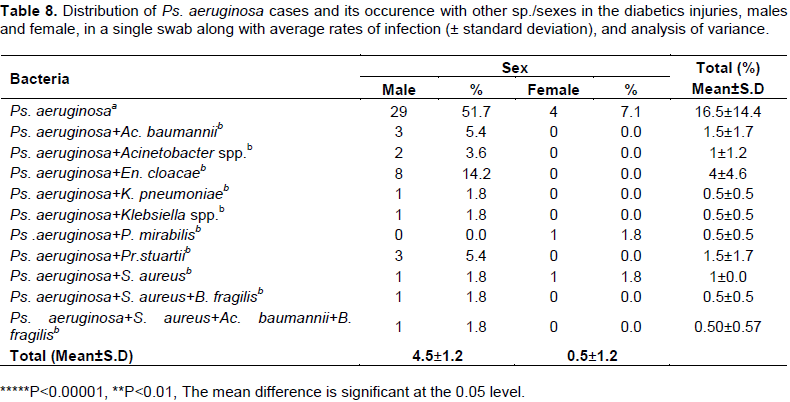 Diabetic injuries and its associated genera with S. aureus

S. aureus (G+ve) was the second genus that recorded the highest rates of bacterial diabetic injuries significantly (Table 7), where it was isolated solely by repeating 22 cases out of 34 cases, with a percentage of 65.1%.  Moreover, while it was associated with other species it ranged between 5.9% and 2.9% (Table 9). 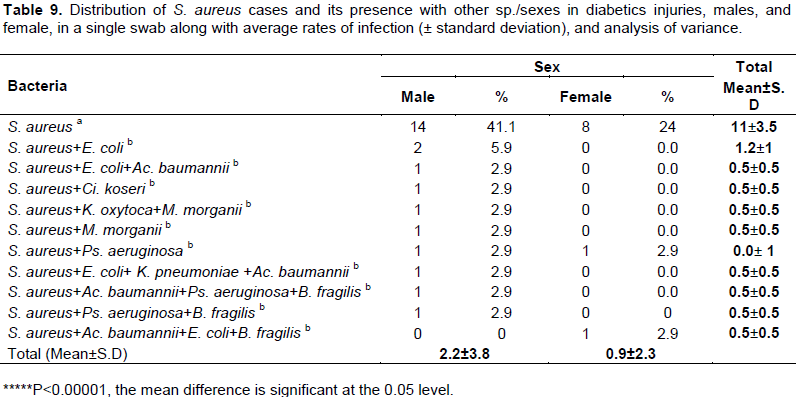 Results of the analysis of variance showed that the percentage of the presence of spherical bacteria (G+ve) of  S. aureus  solely  is  significantly higher (P<0.00001) than its presence associated with other bacterial species with an equal average ratio of 11%. While, the other species was associated with an equal average statistic of 1% and 0.5%. There was a higher incidence for males than females (P<0.00001) with an average infection rate of 2.2% and 0.9% respectively (Table 9, Figure 2). 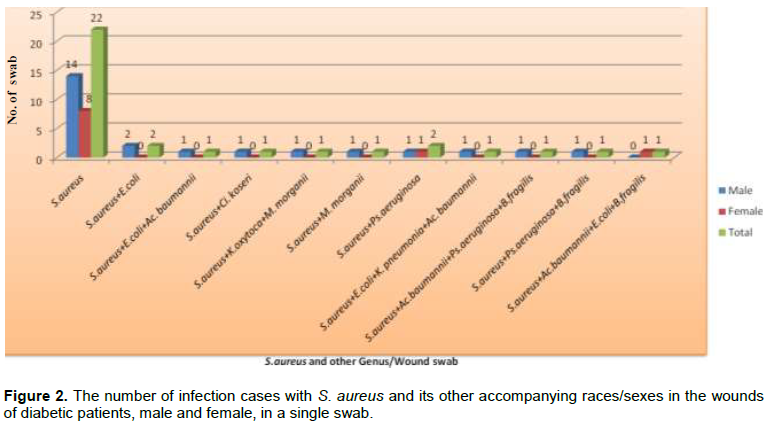 The antagonistic effect and dominance of bacteria isolated from diabetic injuries:

The  results  of the statistical analysis indicated that the highest infection rates of injuries for both males and females were confined in the adult category, while there was no significant difference between the other categories (Abdulrazak et al, 2005; Pemayun and Naibaho, 2017). A high incidence of diabetic foot compared to other injuries was in agreement with the findings of previous studies (Pecoraro et al, 1990; Reiber et al, 1995; Karchmer and Gibbons 1994; Boulton et al, 2006; Gonzalez et al, 2003; Pemayun and Naibaho, 2017).

The current study has shown that the number of inpatients and routine cases for patients scored significantly higher than the number of outpatients and both urgent and very urgent cases. The etiology of bacteria associated with diabetic injuries  coincided with previous studies in the dominance of aerobic bacteria over the anaerobic ones (Ako-Nai et al, 2006; Akhi et al, 2015;  Haldar et al, 2017) and that the G-ve were the most prevalent ones, followed by the G+ve aerobic bacterial species (Espinosa et al, 1999,  Haldar et al, 2017).

Detection of Polymicrobial/swab in this study agreed with Brook and Frazier, (2000); Mottola et al (2016) and Haldar et al (2017). While, Cunha (2000) said that the most diabetic foot injuries, that are gravity ranging between being moderate to severe were caused by Polymicrobial which requires treatment with wide-ranging antibiotics.

Ps. aeruginosa and S. aureus were the dominant in diabetic injuries; this is in agreement with a study of Abdulrazak et al. (2005), Bansal et al. (2008) and Sánchez-Sánchez et al. (2017) who mentioned  that  S. aureus was isolated more frequently regarding individual species; however, it disagreed with Proteus mirabilis (Espinosa et al., 1999), E. coli (Ako-Nai et al., 2006) Streptococcus sp. and Enterococcus sp. (Gonzalez et al., 2003).

Antagonistic ability of Ps. aeruginosa for the most tested isolates namely: S. aureus, Proteus spp., K. pneumoniae, MRSA, Klebsiella spp., E. coli, Ac. baumannii were recorded, and what enhances the obtained result during the research is Ps. aeruginosa in diabetic injuries was dominant. Results from Hosono et al (2011) agreed with our findings which indicated that Ps. aeruginosa has antimicrobial activities against G-ve bacteria, including E. coli and K. pneumoniae, as well as P. aeruginosa itself.  Moreover, Chacon et al. (1986) indicated that 90% of the isolates Ps. aeruginosa have the ability to produce “Bacteriocin”. Bauernfeind et al. (1981) also showed that K. pneumoniae has the ability to produce antioxidants and the inhibition of some genera. However, this result was explained partially with the current study, which showed that K. pneumoniae isolated from the diabetic injuries has antagonistic ability against S. aureus only. In addition, our results recorded the ability of MRSA, En. cloacae and Proteus sp., separately, to inhibit the growth of K. pneumoniae, while Ent. faecalis has antagonistic ability against  itself.

The authors extend their appreciation to the Deanship of Scientific Research at King Saud University for funding this work.