Malaria fever is a major disease that has killed millions of people in tropical and subtropical regions of the world. Mosquitoes are vectors of this debilitating and fatal disease. Therefore, mosquito control becomes paramount using environmentally friendly biological agents instead of chemicals. Water samples obtained from the gutters and water logged areas and soil samples analyzed resulted in 18 different bacteria isolates identified as Staphylococcus sp., Streptococcus sp., Shigella sp., Salmonella sp., Kiebsiella sp., Micrococcus sp., Escherichia coli, Pseudomonas sp., Proteus vulgaris, Proteus penneri, Bacillus sp., Serratia sp., Sporolactobacillus sp., Listeria sp., Clostridium sp., Lactobacillus sp., Enterococcus sp and Citrobacter sp. The activities of these bacteria against 8 day old mosquito larva at different concentrations and volumes were determined. At the end of the screening period of 7 days with bacteria concentration of 3.0 x 108 cfu/ml, Bacillus sp. showed 80% activity, Clostridium sp. 50% activity, Proteus vulgaris and Proteus penneri 20% activity each against the mosquito larva. At bacteria concentration of 3.0 x 109 cfu/10 ml, the activities of the bacteria against the mosquito larva were Bacillus sp. 100%, Clostridium sp. 85%, Sporolactobacillus sp. 60%, while Proteus vulgari and Proteus penneri 40% each. Lactobacillus sp had 35% activity. The rest of the bacteria isolates had no activity or insignificant activities. Other than Bacillus sp which is a known bioinsecticide, Clostridium sp. and Sporolactobacillus sp. can be genetically modified to be used as bioinsectides as man continues to search for alternative means of combating mosquito borne diseases.

Malaria is spread by mosquitoes which breed in open water and spend most of their larva stage feeding on fungi and microorganisms on water surfaces. There are over 200 million cases of malaria each year and, in 2009, malaria was responsible for 781000 deaths worldwide (WHO, 2009). In  2015, 95  countries  and  territories  had malaria transmission. About 3.2 billion people, almost half of the world’s population, are at risk of malaria (WHO, 2015). Malaria is a life-threatening disease caused by parasites that are transmitted to people through the bites of infected female Anopheles mosquitoes. Malaria is preventable   and   curable,   and   increased   efforts  are dramatically reducing the malaria burden in many places. Between 2000 and 2015, malaria incidence among populations at risk (the rate of new cases) fell by 37% globally. In that same period, malaria death rates among populations at risk fell by 60% globally among all age groups, and by 65% among children under 5 (WHO, 2015). The most effective method of reducing the spread of malaria is to control the larva population (Bukhari et al., 2011). The intensive use of chemical insecticides led to the development of resistant insect populations resulting in a reduced control and often to a negative impact on various non-target organisms and on the environment in general (John et al., 2007). Recent efforts to reduce broad spectrum toxins added to the environment have brought biological insecticides back into vogue (Davidson, 1982).

Mosquito-borne diseases such as malaria, cause extensive morbidity and mortality and are a major economic burden within disease-endemic countries (Sachs and Malaney, 2002; Boutayeb, 2006). As vectors of these debilitating and fatal diseases, these insects threaten more than three billion people in both tropical and sub-tropical regions (Sharma, 1999; Snow et al., 2005). The use of pesticides to control mosquitoes in the various stages of the life cycle of mosquitoes have been shown to have weaknesses and limitations as most of the mosquito populations have grown resistance to them and many people are concerned about their harmful effects on the environments, animals, plants and on human (Coleman et al., 2006; Coleman and Hemingway, 2007). Bacterial larvicides have been used with considerable success in nuisance insect and vector control programes for almost two decades. However, current operational cost for larvicides based on Bacillus thuringiensis subspecies Isrealensis and Bacillus sphaericus are high even though they have been investigated and considered environmentally friendly for mosquito control (Poopathi and Abidha, 2010). In view of that, there is need to deepen the search for more potent larvicide producing bacteria. Therefore, this research work will fill the missing gap on the quest for malaria parasite and dengue fever control.

Soil samples of 100 g each were collected using sterile spatula at different locations and stored in sterile screw capped vials. These were pooled together to form a composite. Water samples of 100 ml each were collected from water-logged locations, drainages/gutters and culverts using sterile containers. These water samples were collected from about 2-3 cm below the surface of the water body area. All were mixed to form a composite. The samples were taken to the laboratory for analysis.

Microbiological analysis of the samples

One  gram   of   the   soil   sample   was   weighed   and  transferred aseptically into a test tube containing 9 ml of sterile water and placed on a rotary shaker at 100 rpm for 30 min to dislodge the bacterial cells from the soil particles. The supernatant was serially diluted up to 10-5. Similarly, water samples were diluted up to 10-5 with sterile water (Prescott et al., 2002). One milliliter each from the 10-3 and 10-4 were plated on blood agar, nutrient agar and Polymixin egg yolk mannitolbromothymol blue agar (PEMBA) using spread plate method. The plates were incubated at 37°C for 18-24 h. After incubation, the plates were examined for the presence of discrete colonies. Characteristic discrete colonies on the different media were isolated and purified by sub culturing on nutrient agar.

Rain water was obtained using a wide mouth container during rain and kept outside for a few days. Emergence of mosquito larva was monitored until enough larva were observed in the container on the 8th day. These larva were allowed to breed in their natural environment except during the screening period which lasted for 7 days.

Screening of bacterial isolates for capability to control mosquito larvae

Samples of varying volume each from the stock culture was used to screen for mosquito lavicidal activity through bioassay. A loopful of bacterial cells from the nutrient agar slant was inoculated into 10 ml of nutrient broth and incubated at 30°C on a rotary shaker (200 rpm) for 72 h. Varying volumes of 1, 2, 5 and 10 ml of each of the bacterial isolate at a concentration of about 1 million bacterial cells were tested against 20 larvae of anopheles mosquito in 250 ml of distilled water contained in transparent glass jars. Appropriate controls without the addition of the bacteria culture but containing 1, 2, 5 and 10ml of uninoculated distilled water were maintained. The larvicidal activity of each bacterial isolate was monitored for a period of 7 days. Both the bacterial cultures and controls had 20 larvae each. Counting of the viable larvae was done every day for the period of the screening. A bacterial isolate was considered potent if it both delayed metamorphosis beyond 6 days and caused death of the test larvae. 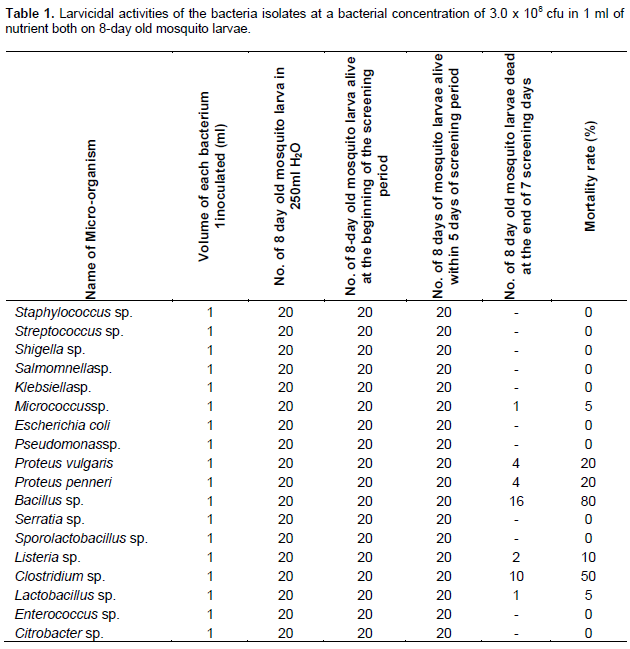 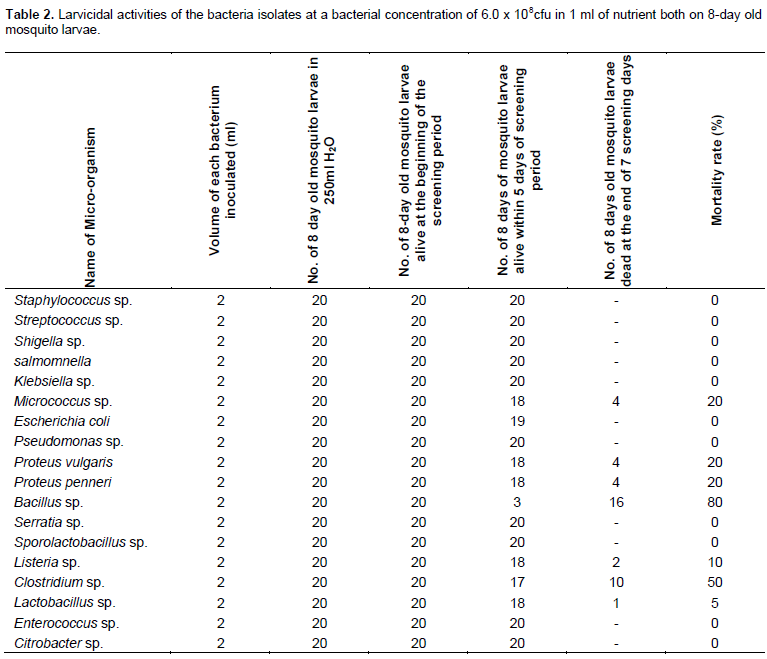 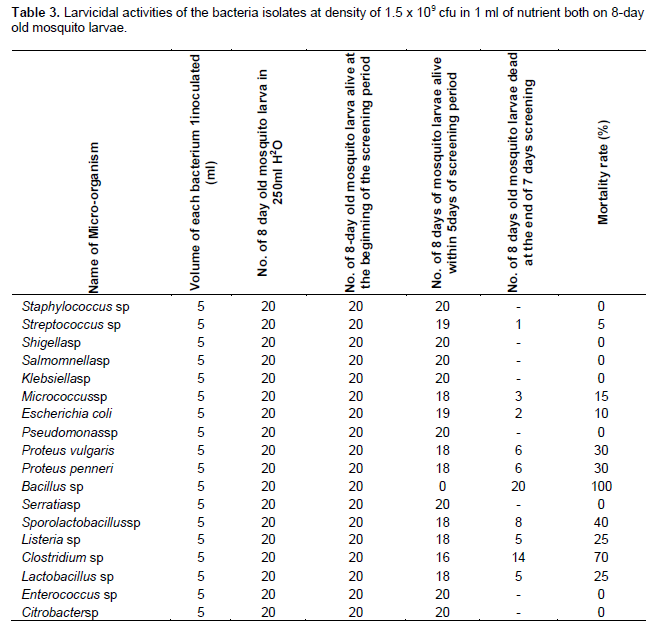 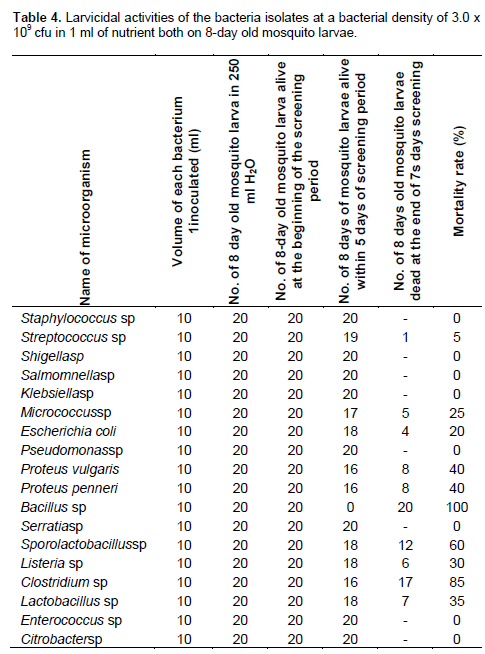 In the last decade, many investigations have been carried out to find potential bioagents for the control of vector mosquitoes. Importantly, the biocontrol of mosquito lavae came to the fore recently. Fungi, bacteria and viruses are used either directly or after manipulation to control insect populations (John et al., 2007). Mosquito larval control is not an entirely new strategy  for  managing  transmissible diseases. Historically, many successful campaigns of mosquito eradication had relied heavily on management of larval habitats. The renewed interest in larval interventions led to the development of environmentally friendly and powerful microbial insecticides such as Bacillus thuringiensis israeliensis (Rose, 2001; Mittal, 2003). The present research investigated some promising bacteria for mosquito control. The results of the study revealed that Bacillus sp., Clostridium sp. and Sporolactobacillus sp had high larvicidal rates: 100%, 85% and 60%, respectively, at 3.0 x 109cfu/ml. This is in agreement with the findings of Poopathi and Abidha (2010), Youssef et al. (2013). Clostridium and Sporolactobacillus species can be used as effective bioinsecticides in the control of mosquito larvae other than Bacillus sp. More recently, the anaerobic bacterium Clostridium bifermentans subsp. Malaysia has been reported to have  high  mosquitocidal  activity  (Qureshi et al., 2014; Charles and Nielsen-LeRoux, 2000; Ruiu, 2015)

This agrees with the works done by Goldberg and Margalit (1977), Margalit and Dean (1985) and Hemstadt et al. (1986) that strains of these bacteria have shown toxicity towards dipteral mosquito larvae thus widening the scope of biological control of mosquitoes with these bacteria. The problem with Clostridium sp. is that the species are pathogenic to humans. It is therefore not logical to use it as a bioinsectide.

From the present study, the potential mosquito larvacidal isolates, Bacillus sp., Clostridium sp. and Sporolactobacillus sp. are spore-forming bacteria which is a distinct and common knowm characteristic among bioinsecticide bacteria. This finding is in accordance with that obtained by Baumann et al. (1985) that toxicity for mosquito larvae has been associated with the formation of  toxic   proteins   during  sporulation  and/or  vegetative growth. In contrast, De Barjac and Frachon (1990) suggested that amorphous structures observed close to the spores could be responsible for toxicity and not the spores. Therefore, it can be deduced that the larcicidal capability of these bacteria could be their spores. Presently, only B. thuringiensis (Bt), B. thuringiensisIsraelensis (Bti) and B. sphaericusare are used in the control of mosquito larva. With proper genetic manipulation of Sporolactobacillus sp., it will join the league of bioinsecticides. Also, Clostridium bifermentans subsp Malaysia has been discovered to show very high potency against mosquito larva which suggests that the species isolated from this study has very high potential.

The authors  have  not  declared  any conflict of interests.