Enterococci are normal human and animal intestinal flora and can be isolated from a variety of natural environments, including soil, water, plants, animals, birds, insects and human excrement. Enterococci are opportunistic pathogens, which can not only cause human urinary tract, skin and soft tissue infections, but also   lead   to   serious    infections,    e.g.,    bacteremia, endocarditis and meningitis (Coque et al., 1996). In recent years, drug resistance of enterococci and spread of resistance genes has become a major concern. Particularly, the occurrence of vancomycin-resistant enterococci (VRE) breaks the last line of human defense against intractable drug-resistant strains. Drug resistant bacteria  may  spread  from  hospitals  or   farms   to   the surrounding environment through a variety of means. As a medium of resistant gene dissemination, water contains a massive resistance gene pool, which provides opportunities for the pathogens or opportunistic pathogens to obtain large number of resistant genes. Infection with these bacteria could cause outbreak of epidemics and their treatment would be extremely difficult. Therefore, in this study we investigated the prevalence of VRE in different water sources. We also analyzed the phenotype, genotype and relationships of the VRE strains in order to provide basic information of VRE in the water environment in China.

Enterococcus faecalis ATCC29212 was purchased from China’s National Institute for the Control of Pharmaceutical and Biological Products.

Water samples were inoculated onto selective agar plates containing 6 μg/mL of vancomycin. After incubation at 35°C for 24 h, colonies growing on the plates were confirmed by broth microdilution method.

Making stocks of the strains

Strains of Enterococcus were inoculated in MH broth. Fresh bacterial culture was added with sterile glycerol (final concentration: 20%) and stored in freezer (-20°C) for future uses.

REP-PCR detection of the similarity between VRE strains

Different types of strains contain differences in more than 3 bands. Different  subtypes  of  strains  contain   difference   in   1-2   bands. Identical subtype indicated that these strains were from the same clone. According to the REP-PCR fingerprints of electrophoresis, each band was converted to binary datamatri x. “1” indicated “presence” and “0” indicated “absence” of a band. Binary data for all the PCR bands was entered into SPSS statistical software. Dendrogram was constructed by selecting Hierarchial Cluster Analysis process and between group average linkage methods to analyze the relationship between strains. 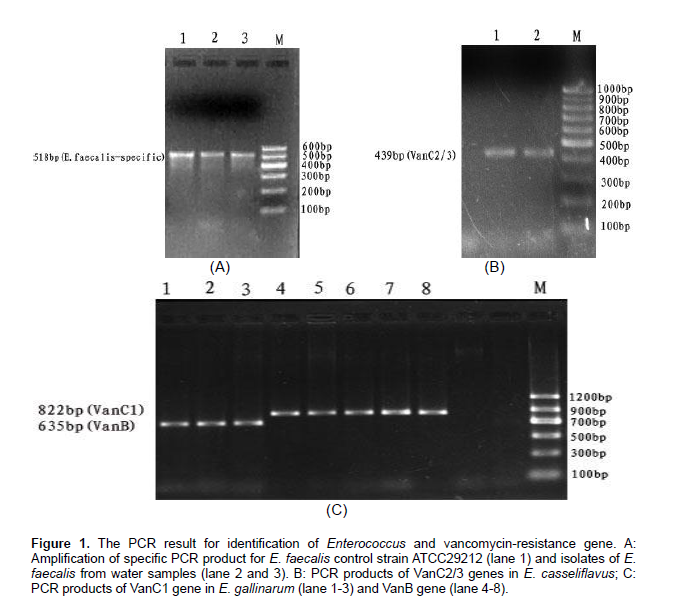 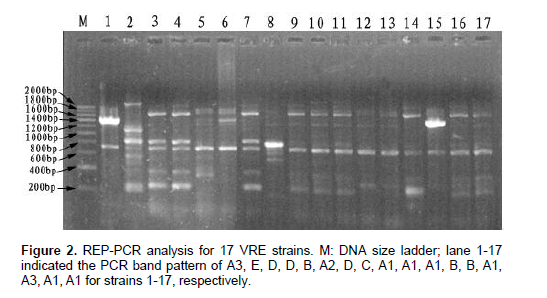 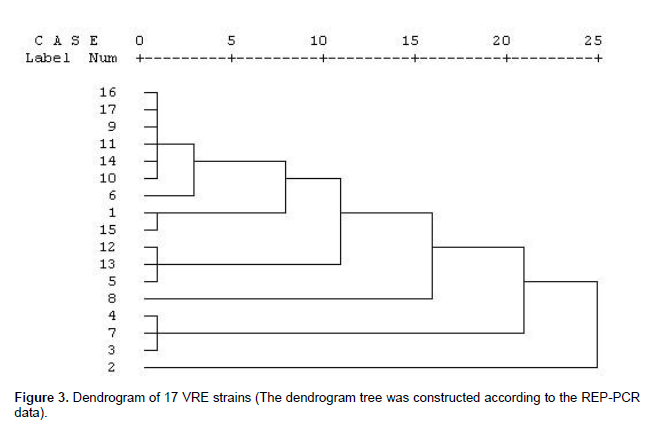 Enterococcus is a clinically common opportunistic pathogen. Widespread application of antibiotics caused the resistance of Enterococcus to multiple antibiotics. Enterococcus has become an important pathogen causing nosocomial and secondary infections. In the United   States,    approximately    12%    of    nosocomial infections were caused by Enterococci (Edmond et al., 1999). Studies have shown that antibiotic-resistant bacteria or genes were disseminated via stool, water or food. In addition, antibiotic-resistant bacteria or genes in animals or humans can be further directly or indirectly, continuously or intermittently disseminated through various channels and ecological environments (Witte, 2000). Many researchers have considered Enterococcus as an indicator bacterium to investigate animal, human and environmental bacterial resistance to antimicrobial drugs. All the 17 strains isolated in this study have low level resistance to vancomycin. Strains with high level resistance to vancomycin were not isolated. VRE strain can be resistant to multiple antibiotics. Our results showed that VRE was isolated from 22.5% (9/40) of the cesspool samples, 15% (6/40) of sewer samples and 5% (2/40) of university fish farm samples. VRE was not isolated from Minjiang River and residence district pond. These results indicate that cesspool and sewer are severely contaminated, while Minjiang River and residence district pond are not contaminated with VRE.

The highest isolation rate of VRE was observed in cesspool, indicating that VRE is more  frequently  present in severely contaminated environments. The waste water in the cesspool was emitted from the central laboratory building  of  the university, which includes plant pathology laboratory, veterinary pharmacology laboratory, aquatic veterinary laboratory and animal biochemistry laboratory. The wastes from these laboratories may contain a variety of toxic chemicals, bacteria and drug residues. VanB-type Enterococcus strains in university fish farm may come from either cesspool or the surrounding human and animal contacts. REP-PCR analysis showed that the VRE strains isolated from sewer had high level of genetic similarity to those isolated from cesspool. In addition, one VanB-type VRE strain from fish farm was genetically identical to one VanB-type VRE strain isolated from cesspool, indicating that clonal dissemination occurred between these two environments.

This research was supported by National Natural Science Foundation of China (Grant No. 31272606) and Researching Center of Water source and water safety, Fujian Agriculture and Forestry University, Fujian province, China.