Countries like Ghana, which is developing needs a lot of infrastructural expansion as it plays a pivotal role in her economic development. The needed physical infrastructural development cuts across all facets, like industrial buildings, commercial buildings, engineering projects and the housing stocks. In fact, these developing countries are facing the challenge of decreasing their housing deficits. Both the formal and informal sectors provide for housing needs especially in Ghana, Anosike and Oyebade (2012). Walling elements in this infrastructure are mostly done using sandcrete blocks. Baiden and Tuuli (2004) attest to the fact that sandcrete blocks are widely used as walling units in Ghana. Anosike and Oyebade (2012) reinforce this assertion by stating that sandcrete  blocks  are  used  in  over  90%  of physical infrastructures in Nigeria. In Ghana, sandcrete blocks as masonry units in assemblages of walls are used either as load bearing or non-load bearing walls. In most cases they are used in both the substructure and super structure of buildings especially in the urban centers or dwellings where demands for housing units are on the ascendancy. It is expected of these sandcrete blocks to perform their intended functions in structures whether they are serving as load bearing wall units or non-load bearing wall units.

In recent years, there has been much concerns about the strength of the sandcrete blocks produced and used as walling units in the construction sector both (formal and informal) in Ghana. According to Kolovos et al. (2016),   sandcrete  blocks  can  only  be  acceptable   for construction only when they are properly manufactured with good compressive strength and high bulk density. Studies on the compressive strength of sandcrete blocks are numerous; their findings suggest that sandcrete blocks are not meeting their expected strengths (Baiden and Tuuli, 2004; Anosike and Oyebade, 2012; Ngugi et al., 2014). Some researches like Chindaprasirt et al. (2005), Saraswathy et al. (2002) and Manikandan and Ramamurthy (2007) explored the magnitude of the effects of the continuous usage of constituents of sandcrete and concrete blocks on the environment and recommended the need for alternative materials or reduction in the use of them to safe guard the environment.

The rapid growth in infrastructural development has led to an increase in the demand for sandcrete block. This in effect has consequently increased the demand for Ordinary Potland Cement (OPC) since cement is the main constituent in sandcrete block production yet it is expensive. OPC, as a constituent of the sandcrete blocks plays a vital role in the strength. However, the cost of the cement especially in Ghana keeps rising day by day mainly because of the imported components such as clinker and the method of manufacturing which depends on electricity. For instance, the Saturday February 22nd of 2003 issue of the ‘Daily graphic page 14, the president of Ghana Institute of Engineers (GhIE) expressed concern about over-reliance on the use of foreign materials in the building industry, adding that “in the year 2000 alone Ghana imported hundred million dollars’ worth of clinker for cement production”. Currently Ghana imports clinker and even OPC from outside the country for her construction industry. Rajdev et al. (2013), compares the use of Pozzolana cement, fly ash blended cements as alternatives to OPC. In the light of all these, it is important to find an effective way of enhancing the strength of sandcrete blocks without necessarily increasing the cement content. This work seeks to do this by introducing a percentage of coarse aggregates into the mixture of the sandcrete blocks. The objective of the study was to find out whether the strength of the traditional sandcrete blocks could be enhanced without necessarily increasing the cement content by introducing a percentage of coarse aggregates in the batching of the constituents of the sandcrete blocks.

There are numerous researches on improving the compressive strength of sandcrete block by limiting cement content and adding other constituents. The findings of these researches are presented in Table 1 below. The researchers explored whether sawdust ash and other substitutes have great potential to perform as a Pozzolanic material, and concluded that the use of the substitutes can be  considered  for  the  normal  and  high strength concrete as a cement replacement. Thus reducing the environmental burden and creates a solution to the sustainable construction material to build cost-effective structures. 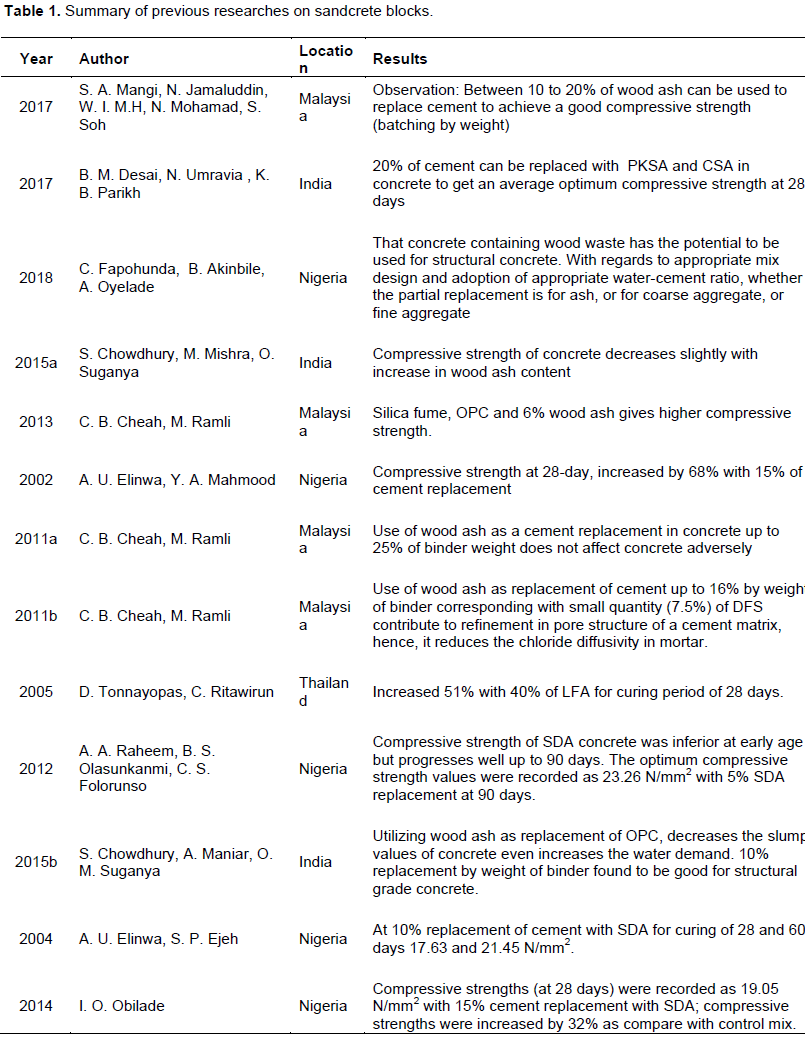 Samples of the traditional sandcrete blocks were prepared and tested for compressive strengths, using a mix proportion of cement to sand aggregate ratio of 1:12. In all four different kinds of mixes were made; the first one was used as a reference without the addition of course aggregate, and in the remaining three, course aggregates were added in percentages of 5, 10 and 15% by volume of the reference mix. Laboratory experimental tests were carried out in order to obtain the compressive strengths of the blocks moulded at 14, 21 and 28 days, respectively.

The BS 882: 1989 part 2 procedures were followed for the grading of the aggregates using test sieves. The fine and coarse aggregates were obtained from the stockpile of Building Technology Department by picking pieces from different parts of the stock. The test procedures for result for coarse and fine aggregates were as follows:

(1) Samples of both fine and course aggregates were taken from a stockpile from Building Technology Department and brought to the laboratory.

(2) A 10 kg of coarse aggregates was weighed using the measuring scale and was poured into an empty pan.

(4) Then a 2.5 kg sample was weighed. The sieves were arranged with the largest at the top.

(5) The weighed coarse aggregate was poured on the sieve.

The following precautions were taken during the grading test result:

(1) It was ensured that the sample aggregates were fetched from different parts from the stockpile for use.

(2) The measuring scale was set to zero before usage.

(3) During the weighing of the sample, it was ensured that the working platform was not harkening to prevent inaccurate reading.

(4) It was ensured that sieving was actually completed as taking readings (Baiden and Tuuli, 2004)

Coarse aggregates (10 mm maximum) were obtained by sieve analysis from an all in aggregates heaped in front of the new Building Technology Laboratory.

Batching of the constituent materials was in terms  of  the dried weight of the materials and it was done by volume using cement to sand ratio of 1:12. This method and ratio were used based on the fact that Baiden and Tuuli (2004) recommended a ratio of 1:12 when using mechanical vibrator during compaction. This research contends that it is possible to achieve a good result using the coarse aggregates. The measuring was done using the 17 L bucket by measuring each quantity for materials with respect to their ratios for mixing. The cement to sand ratio for all the mixtures in this study was 1:12.

The water cement ratio used in this research was 0.35 for all the blocks made. The batched cement and sand were thoroughly mixed until a uniform mixture was obtained using shovel. The required percentage of coarse aggregates was then introduced and uniformly mixed with the required water content. During the batching and mixing of the aggregates, all unwanted materials were carefully removed from the mix.

After the constituents have been mixed uniformly, the resultant mixture was then loaded into the Simple Single Hand Manually Operated Block Moulding Machine of which the initial pallet has been introduced. The machine was filled fully allowing the material to protrude. The content of the machine was hence compacted while conserving consistent blows of 6. After this, the freshly moulded blocks with the wooden pallets were vigilantly removed from the machine and sent to curing place.

The blocks were placed in the new Building Technology Laboratory where they were protected against rain and direct sunshine in order to avoid shrinkage. The first curing was done 48 h after moulding by spraying tap water onto the blocks to enhance strength mobilization and this was done for 7 days. The spraying was done early in the morning and in the evening.

Each block was weighed on the various crushing days using an electronic weighing scale in the newly built Building Technology Laboratory of Ho Technical University (HTU) in order to be able to determine the various densities of the blocks and the results are as shown in Table 4.

The blocks (that is, 125 × 450 mm surface) were tested on the edge for compressive strength using Compressive Strength Testing Machine at 14, 21 and 28 days, respectively. The tests results obtained are as shown in Tables 8 to 9.

Analysis of the test results

The result of the text conducted is shown in all the previously presented tables. The general trend of compressive strength development of the sandcrete blocks with various material compositions. The following analyses were made from the result obtained.

Grading of the aggregates

The compressive stress was determined by dividing the crushing load  by  the  total  surface  area  of  each  block tested and the results of the calculation are shown in Table 8. The results are plotted in the graph as shown in Figure 1.

A sample of 10 blocks were moulded for all the four kinds of sandcrete blocks, that is; sandcrete blocks containing 0, 5, 10, and 15% maximum coarse aggregates size of 10 mm. These blocks which were of size 125 × 225 × 450 mm were tested for their densities and compressive strengths. The test results of the block indicated that the densities increase slightly with increasing coarse aggregates percentage contents.

That, coarse aggregates can be used in the sandcrete block production for building element at various levels provided the compressive strength required falls within the result. However, it is recommended that this project should be carried on further, with varied maximum sizes of coarse aggregates either less or above 10 mm. Also, since the strength of the sandcrete blocks keeps increasing with increasing coarse aggregates percentage contents, another investigation should be carried out to ascertain the right percentage of 10 mm maximum aggregate size that can give the best strength. Lastly, a research should be undertaken to ascertain the economy of the introduction of the coarse aggregates to determine whether they are economical to be used.