The development of cancer is a multifactorial process influenced by genetic, physiological, and environmental factors (Turpin et al., 2010; Lyra et al., 2013). Diet is definitely the most exogenous factor identified so far in the etiology of colorectal cancer (CRC)  (Migliore et al.,2011). There have been a number of different dietary factors that have been linked to a higher risk of CRC. The most strongly implicated environmental and cultural factor is a high fat, high protein, and low fiber diet (Willett, 1989; Weisburger, 1991). The Western diet, rich in fats and proteins and poor in dietary fiber, calcium, and other constituents, is associated with a higher incidence of CRC than the Mediterranean diet (Fini et al., 2011).
Among chemically induced animal models, 1,2-dimethylhydrazine (DMH) is the most widely used. It is being used since 1967 to generate intestinal cancer models in different types of mammalian animals (Druckrey et al., 1967).  The potency of DMH, to induce colorectal tumors, is for the reason of inducing DNA methylation (Rowlatt et al., 2016), which was strongly correlated with abnormal gene expression and tumorgenesis (Salehi et al., 2015). Experimental CRC induced by DMH in model animals mimics histopathological and molecular characteristics of human CRC model and is therefore an ideal model for chemoprevention studies (LaMont and O’Gorman, 1978).
Initiation and progression of CRC are associated with an accumulation of alterations in the function of key regulatory genes and genetic instability. Attempts have been made to assess genetic features of CRC that could predict prognosis, recurrence, and survival in an independent manner; however, studies (Bisgaard et al., 2001; Choi et al., 2002; Diep et al., 2003; Altonsy and Andrews, 2011) have almost focused exclusively on gene level alterations without taking into account the numerous coexisting genomic abnormalities at higher organizational levels, in particular numerical and structural chromosomal abnormalities, that are also likely to exert a pathogenetic influence. Thus, the extensive complexity and genetic heterogeneity that characterize the overall genomic profile of CRC have not been duly recognized.
Screening strategies does not necessarily prevent the development of CRC or prevent mortality. Therefore, interest in primary prevention research has increased in recent years. In this regard, multiple attempts to modify lifestyle and dietary factors to try to reduce the incidence of CRC have been promoted. However, some studies, many of them, observational or case-control, have yielded conflicting data (Hawk and Levin, 2005). Consequently, in the past 20 years, chemoprevention studies have grown in importance.
Chemoprevention presents a plausible approach to reducing the incidence and mortality from cancer (Tanaka, 1997a, b). CRC has a natural history of transition from normal crypts through adenoma (a benign epithelial neoplasm) to overt adenocarcinoma (a malignant epithelial neoplasm) occurring over an average of 10 to 20 years, thereby providing a window of opportunity for effective intervention and prevention.
Epidemiological and experimental studies imply that garlic is a potent vegetable for cancer prevention (Kim and Kwon, 2009; Milner, 1996; Iciek et al., 2009). Diallyl disulfide (DADS) has been shown to inhibit growth of cancer cells by causing cell  cycle  arrest  and  apoptosis,inhibits angiogenesis, and suppresses metastasis (Ariga and Seki, 2006). It exhibits anticancer effect through their anticarcinogenic, antimutagenic, antitumor properties (that is, inhibition of carcinogen activation, boost phase 2 detoxifying processes, cell cycle arrest of malignant cells) mostly in G2/M phases, stimulation of the mitochondrial apoptotic pathway, and induced chromatin configuration  changes by increasing histone acetylation of histone-3 and -4  (Iciek et al., 2009; Altonsy et al., 2012, 2015).
CRC  have been described with three major forms of genetic instability (Fearon and Vogelstein, 1990; Georgiades et al., 1999; Shen et al., 2007). In about 13% of CRC cases, mismatch repair deficiency leads to microsatellite instability (Markowitz, 2000). Approximately, 40% of CRC tumors are characterized by epigenetic changes especially DNA methylation, a phenomenon termed CpG Islands Methylator Phenotype (Altonsy and Andrews, 2011; Toyota et al., 2000; Weisenberger et al., 2006). In the remaining 47% of CRCs, chromosomal instability (CIN) leads to gains and losses of large segments of chromosomes (Lengauer et al., 1998). CIN was used generally to describe aneuploidy, while intrachromosomal instability (ICIN) results from insertions, deletions, inversions, translocations, amplifications, and point mutations (Orlando et al., 2008).
Today, it is a widely used model for the evaluation of environmental, dietary, and chemopreventive agents in human gastric cancer cells in vivo and in vitro (Su et al., 2012). It is also used to study morphologically in parallel with cytogenetically and molecular events of the multistage development of CRC in order to elucidate new targets for chemoprevention (Chen and  Huang, 2009; Rosenberg et al., 2009).
The attempt of this study was to assess, whether the genomic instability at ICIN level in the blood of a mammalian animal model can provide valuable and independent information of RCC induced by DMH with and without DADS treatments and to evaluate simultaneously the prognostic importance of all nonrandom cytogenetic features compared with the histopathological parameters.

Chemicals
DMH and DADS were purchased from Sigma-Aldrich (St. Louis, Missouri, USA). Other reagents such as RPMI 1640, fetal calf serum, L-glutamine, penicillin, and streptomycin, trypsin, colcemid, Dulbecco's phosphate buffered saline were from Gibco-BRL, Life Technologies (Gaithersburg, MD, USA).
Experimental design
The present study was carried out on male rabbits (O. cuniculus), four weeks old, obtained from the animal house of Sohag University. The animals were housed  in  polypropylene  cages  and maintained at controlled conditions of temperature ï€ 28°C with 12 h/12 h reversed day-night cycle. Rabbits were fed on a commercial pellet diet. Twenty animals were randomly assorted into equal five groups, four animals each, and treated for 4 weeks as the following: Control group (group A) received vehicle control only (distilled water containing 1 mM EDTA) via subcutaneous (s.c.) injection; DMH group (group B) received DMH only dissolved in the vehicle control (20 mg/kg, s.c.); DMH+DADS group (group C) received DADS (60 mg/kg) via intragastric intubation and DMH in the next day (that is, alternatively); DADS group (group D) daily received DADS only; Pretretaed DADS+DMH group (group E) received DADS for the first 4 weeks followed by DMH for extra 4 weeks. The currently used protocol for DMH aimed just to initiate carcinogenesis and not to produce frank carcinoma in a way to mimic genetic predisposition for RCC (Kuratko and Pence, 1992). All experimental procedures were conducted according to the ethical standards of Sohag University for animal experimentation.
Histopathology
At the end of the experiment, animals were anesthetized, sacrificed, and carefully dissected. The rectal region from each animal were fixed in 10% buffered formalin, dehydrated in ethyl alcohol, cleared in methyl benzoate and mounting in paraffin wax. Paraffin sections (7 µm thickness) were deparaffinized, hydrated and stained with Hematoxylin and Eosin (H&E) for general histology (Drury and Wallnigton, 1976). Slides were mounted in Distrene, Plasticiser, and Xylene (DPX) medium, observed under light microscope (Axio Lab. A1, Carl Zeiss, Germany) and photographed by AxioCamERc5s camera.
Cytogenetic analysis
After sacrificing animals, blood samples were collected from each group in heparinized tubes within an hour of collection and processed for direct chromosomal preparation. Cells were incubated at 37°C in a 5% CO2 atmosphere for 72 h short-term culture using standard technique (Yadav, 1981). For G-banding, metaphases spread on slides were oxidized with 15% hydrogen peroxide solution then rinsed twice with Dulbecco's phosphate buffered saline (DPBS) (Yadav and Balakririshnan, 1985). Digestion was made and stopped with 0.0025% trypsin and DPBS, respectively. Metaphase cells were stained with 3% Giemsa solution (Sumner, 1980; Longkumer et al., 2012). At least 20 well-spread metaphases for each animal/group were captured and analyzed using a software program (Vedio-test Karyo 3.1). This technique, providing 300 to 400 stained bands, facilitate the detection of incorrect chromosome numbers (aneuploidies), mosaicism and structural chromosome abnormalities, such as translocations, duplications, deletions, or insertions, with a resolution of 5 to 10 Mb. A karyotype was considered normal when no abnormality was detected for ≥ 20 metaphases examined.
Mitotic index (MI)
The metaphase index was estimated in each animal group. Analysis was based on method of Ikeda et al. (2000) at least 1000 interphase cells/animal. The mitotic index was calculated as follows:
Mitotic index (%) = No. dividing cells / Total counted cells.
Statistical analysis
Chromosomal aberrations were analysed  by  one  way  analysis  of variance (ANOVA) and MI within the five rabbit groups and compared by Student’s T test (Rokitskii, 1978) using Microsoft Excel. P value (≤0.05) was considered statistically significant

Histopathology
Control group (A)
Examination of H&E stained sections of the rectal tissue showed closely packed simple tubular straight rectal crypts (RC). They were aligned parallel to each other and extended down to muscularis mucosa. Lamina propria was appeared to fill the space between the crypts and contained mononuclear cells, and submucosal areolar connective tissue contains darkly stained lymphocytes (Figure 1; panels A, F, and K). The mucosa has a smooth surface (no villi) and contains glands of Lieberkuhn. Goblet cells characterized by vacuolated cytoplasm and have basally positioned nuclei. The mucosa of the rectum is similar to that of the colon but has fewer glands of Lieberkuhn. Basal parts of the crypts were lined by columnar cells with basal and oval vesicular nuclei (Figure 1; panels A, F, and K).
DMH group (B)
Histological examination of the rectum demonstrated hyperplastic epithelial lesions in DMH group. The RCC showed different criteria of epithelial hyperplasia. The most observed difference is the altered stain ability toward acidic dyes (cytoplasmic basophilia; BP) near the base of the lining cells of the RC (Figure 1; panels B, G, and L). Metaplasia squamation of epithelia in the intestinal glands and scarcity of connective tissue cells were observed (Figure 1; Panel L) as compared to control.  There were no signs of intraepithelial infiltration found in lymphocytes. It was possible to discern in DMH-treated group mucosae residual evidence of hyperplasia, and occasional dysplastic-looking crypts, but these differences were less conspicuous than they had been found in rectal tissues of both control and DADS treated groups.
DMH+DADS group (C)
Amelioration of DMH group co-treatment with DADS is reflected by the stain ability of the normal rectal crypts beside a scarcity of BP and the frequently observed connective tissue cells with somewhat crowded lymphocytes in lamina propria (Figure 1; panels C, H, and M) as compared to DMH treated group. The upper segments of these crypts were characterized by goblet cells in normal size (Figure 1; panel M).
DADS group (D)
Treated  group  with DAD  showed  the  same  organization  observed in the control group (Figure 1; panels D, I, N). Normal epithelia with their complementary cell and connective tissue were observed.
PreDADS+DMH group (E)
The  protective  group  showed  improvements  in  the  rectal crypts  and    most  of  the    described  histological apparitions  which were  not  DADS and control groups (Figure 1; panels D, I, N). Protection of DADS treatment is also reflected in the stain ability of the rectal crypts and the presence of connective tissue cells as compared to DMH treated group. 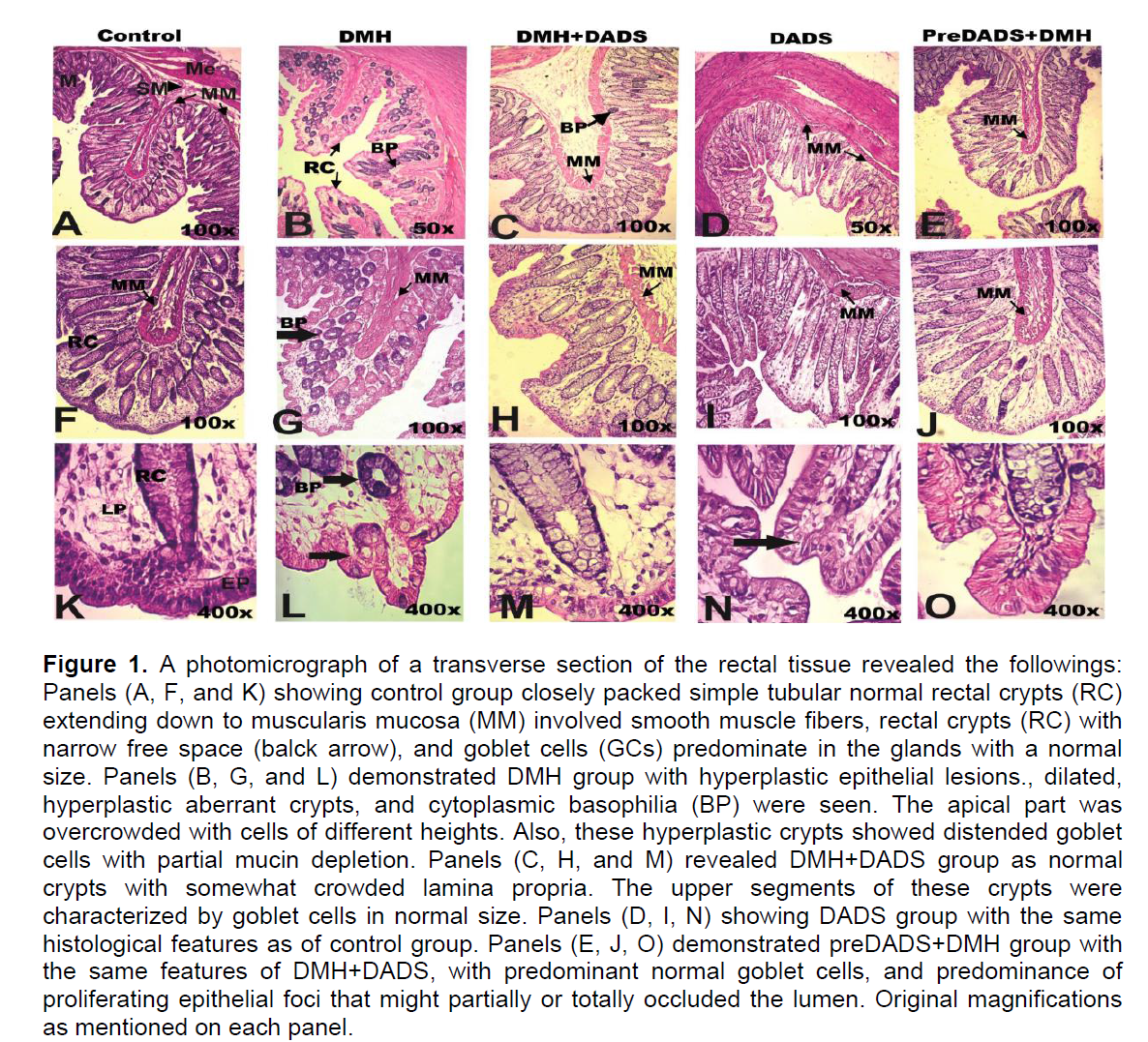 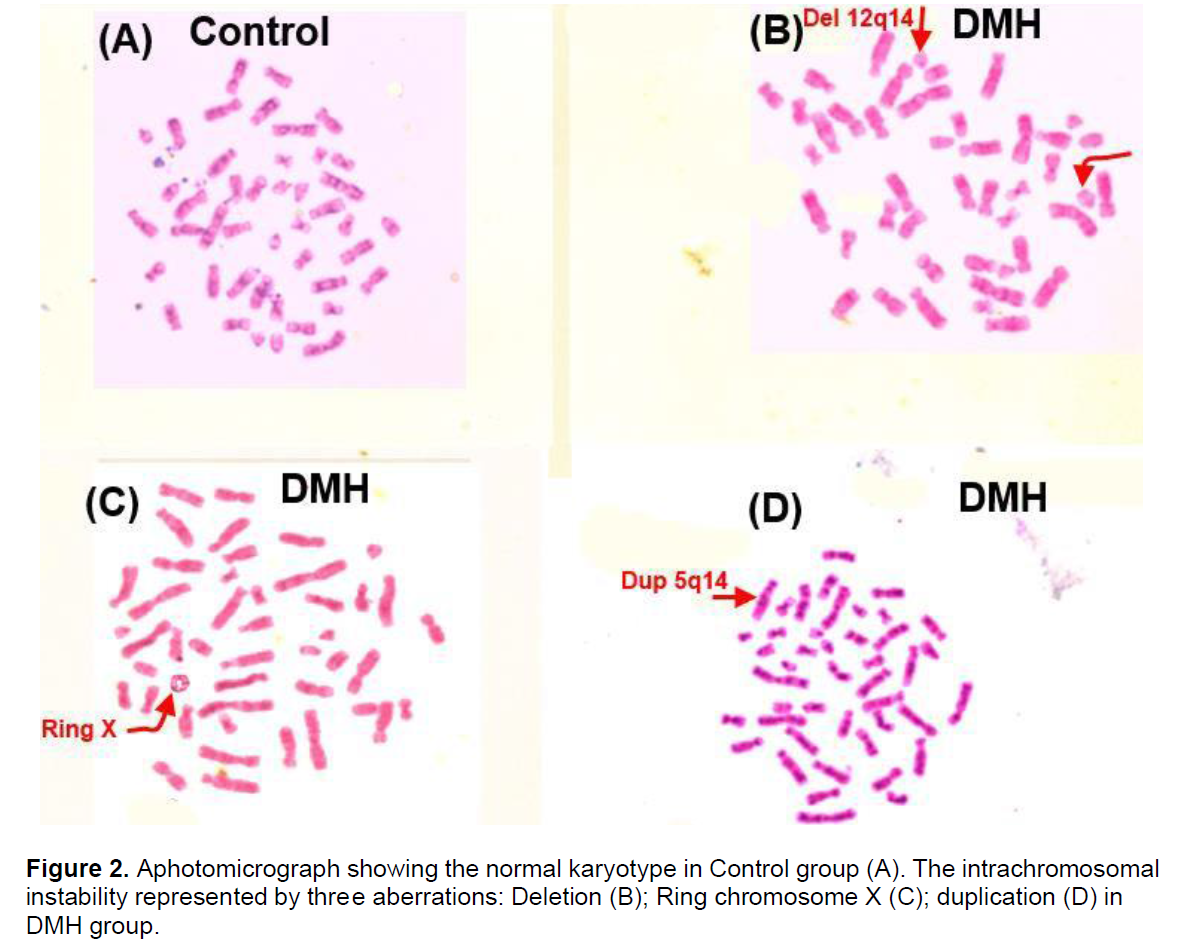 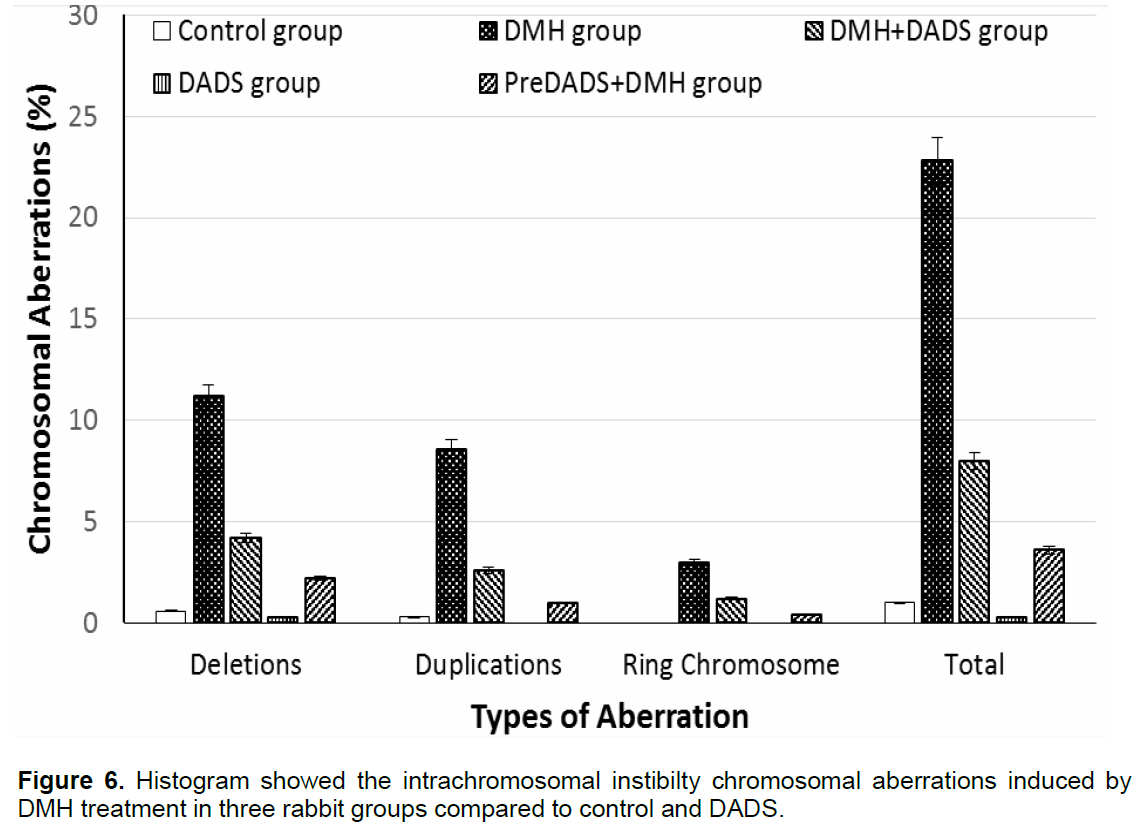 Comparative mapping data
The present cytogenetic data on animal model could be compared with a human/rabbit mapping data (Table 2), according to Hayes et al. (2002), Chantry-Darmon et al. (2003, 2005a, 2005b). The publication of reciprocal heterologous chromosome painting data (Korstanje et al., 1999) provides help to anchor these gene-associated markers to rabbit chromosomes. The deletions involved 1p12, 15p23, and 21p14 loci which encode for PSAT1, ALB and SLC15A4 genes, respectively. While duplications among loci of 13q23, 14q21, and 20q12.3 encode for ADORA3, APOD, and TGFB3 genes (Table 2).

Mitotic index
The MI of the entire designed groups in the present study, as shown in Table 3 and Figure 7 ranged from little different averages for control (A) (18%) and DADS (D) (17%) groups to highly elevated averages for DMH (B) (46%) and DMH+DADS (C) (38%) groups. The pretreated DADS+DMH (E) group had a very close average (20%) in comparison with control. 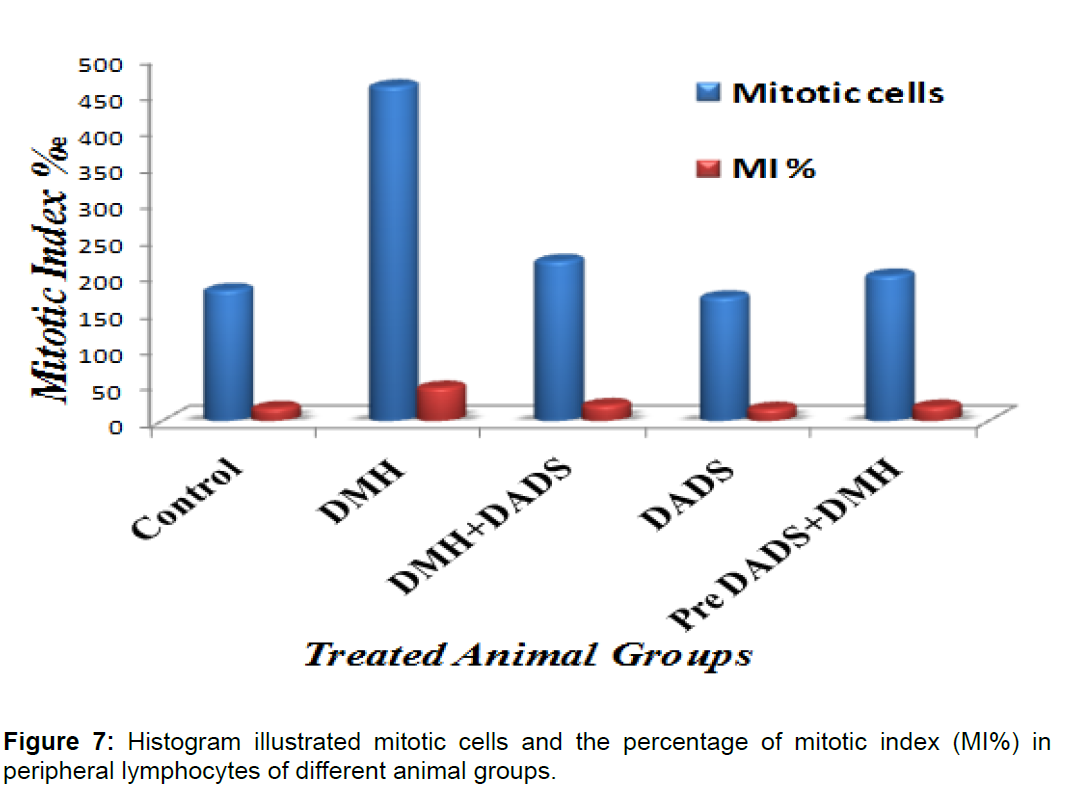