A retrospective study of gastrointestinal tract (GIT) tumors of humans in Zaria was carried out to determine the prevalence rates. Of the 124 human cases recorded in Ahmadu Bello University Teaching Hospital (ABUTH) Zaria, 39 (31.45%) had upper GIT tumors while 42 (33.87%) had tumors located in the lower GIT. All age groups were affected. The risk for developing tumors increased with age in cases studied. The affected age groups varied from 0.75 to 89 years with median of 44.5 years. Males were over represented with sex ratio of 1.5:1. Adenocarcinomas and squamous cell carcinomas were predominant.

Records from Pathology Department of the Faculty of Medicine, Ahmadu Bello University Teaching Hospital, Zaria, Nigeria were retrospectively reviewed for diagnoses of GIT tumors over a three year period (1999-2001). Only cases with complete histologic diagnosis were used for the study. Data was collected for age, sex and histopathologic diagnosis of the tumor types. Other GIT associated tumors were also reviewed for record purposes only. Only malignant tumors were recorded in this study.

On Table 1, one hundred and twenty-four cases of GIT tumors were reviewed with the median age of 44.5 years recorded. The age range of 26 to 65 had the highest prevalence of 72.6% (90). The male:female ratio was 1.5:1 with 60.5% (75) males diagnosed with GIT tumors as against 39.5% (49) females. There was no appreciable difference between upper and lower GIT tumor numbers. 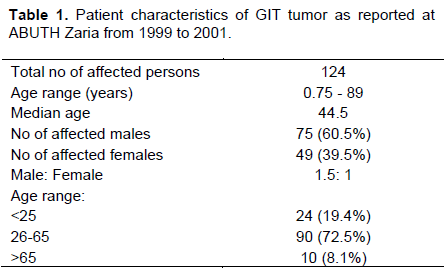 Table 2 showed, lower GIT tumors had the highest prevalence of 33.87% (42) while upper GIT tumors came second highest with 31.45% (39); most of these were in the oral cavity and majority of the cases were seen from 40 years and above.

On Table 3, nine colonic and 21 rectal tumors were recorded. Hodgkins and non-hodgkins lymphoma were associated predominantly with upper GIT tract. 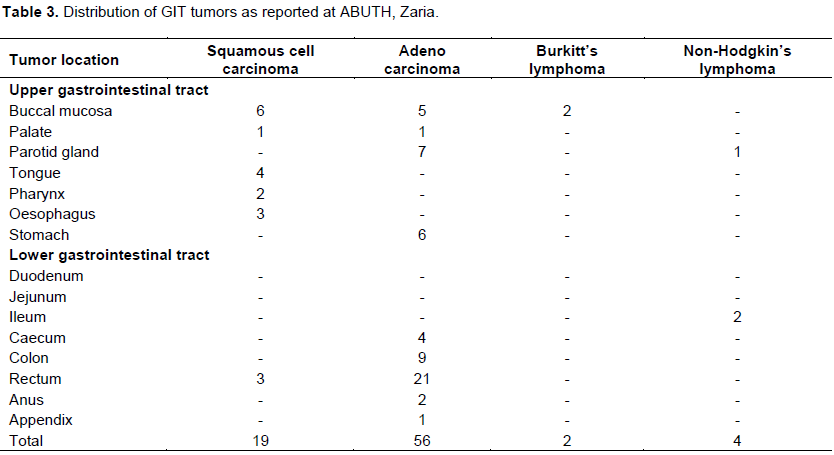 In this study, a total of 124 cases of GIT tumors were reviewed with the median age of 44.5 years recorded. This age falls below the tumor age of 55 in western civilization and could be purely because of the lower life expectancy ages in third world countries.  The age range of 26 to 65 recorded the highest prevalence of 72.6% (90) during the study period (1999-2001). This agrees with the report that for decades in the United States the number of patients within this age range with GIT cancer has risen rapidly and steadily, from 298,000 in 1965 to more than 564,800 in 1998 (Newschaffer, 2001). However, these figures are affected by increasing population and the growing percentage of middle aged adults and older adults, who traditionally have a higher incidence of cancer. Age is a major risk factor for bowel cancer where 95% of cases occur in the United States after the age of 40; only 1% is diagnosed before 20 years and 5% before 40 years. Younger adults are more at risk if there is a family history of the disease (Rustgi and El-Serag, 2014). The result indicates that like other cancers elsewhere, it is primarily an old age associated disease.
The ratio of male: female in this study was 1.5: 1 (Table 1), showing that 60.5% (75) males were diagnosed with GIT tumors as against 39.5% (49) females. This agrees with the findings of Newschaffer (2001) and may be explained by the fact that men are more adventurous moving and eating a variety of risk factors indicating that this could be as a result of lifestyle of the patients geographically, as more males smoke cigarette and consumed alcohol which are predisposing factors. Although, this does not agree with the report from South East Asia and India which have increasing incidence in females where older women smoke pipe, chew betelnut and tobacco, marijuana and spices (Brooks et al., 2009; Islami et al., 2009; Shigaki et al., 2012). In the United Kingdom, the male:female ratio is approximately the same as there are about 31,500 new cases annually (15,700 male and 15,800 female) and 18,100 deaths (9,037 men and 9,063 women), the reason being that both males and females are exposed to the same predisposing  factors  for  example,  occupational  factors and lifestyles (Suggars, 2000). There was no appreciable difference between upper and lower GIT tumor numbers possibly due to the common factors initiating and promoting tumors in these sites.
Worldwide, the incidence of cancer varies enormously among different geographic areas. The death rate from all cancers in males is 311 per 100,000 in Luxembourg (the highest) as compared to 38 in El Salvador (the lowest). For women it is 175 in Denmark and 49 in El Salvador. The figures for the United States are 163 per 100,000 men and 110 per 100,000 women. For particular cancers, the difference between countries may be as high as 40 fold (Pimentel-Nunes et al., 2013). Evidence from studies of populations that migrated from one geographic area to another suggests that these variations are due to differences in lifestyle rather than ethnic origin. This is consistent with other evidence that most cancers are predominantly related to environmental causes rather than hereditary, although the two factors interact.
Table 2 showed lower GIT tumors had the highest prevalence of 33.87% (42). The reason for the increase in the number of bowel cancer might be because it is not discovered early enough for cure as is the case in UK (Suggars, 2000). While Table 3 showed that, 9 colonic and 21 rectal tumors were recorded. In the developed countries, it is reputed that up to 20 times more people get bowel cancer compared with the rest of the world and about 66% of the differences could be due to the proportions of dietary fiber and fats in the diet (Rogler, 2014).  The  action  of  bacteria  on some types of fiber releases certain fatty acids that are thought to stimulate the multiplication of cells lining the bowel. Some studies have shown that anything that make cells multiply more quickly may cause changes leading to tumors (Yamada and Alpers, 2009; Mazzanti et al., 2016).
Upper GIT tumors from this study (Table 2) came second highest with 31.45% (39); most of these were in the oral cavity. Majority of the cases were seen from 40 years and above and agrees with the findings of Agarwal et al. (2012). This could be as a result of easy contact with carcinogens like tobacco and betelnut chewing, consumption of alcohol, sepsis, syphilis, smoking especially of pipe and cigar, marijuana and spice which are common among the people of this region of the country.
Hodgkins and non-hodgkins lymphoma (Table 3), were shown to be associated predominantly with upper GIT tract. The reasons for these are not obvious but it is possible that, the small number of data collected is inadequate to explain this association.

This study shows that GIT malignancies can occur in all ages and both sexes in humans though the incidence is higher in men due to factors such as lifestyle and occupation.