Usefulness of urinary fibronectin and laminin as biomarkers of glomerular injury in diabetics in Port Harcourt, Nigeria

Diabetic nephropathy is one of the most challenging microvascular complications of type 2 DM, with significant morbidity and mortality (Hellemons et al., 2012). It occurs in about one-third of diabetic patients in the world and is the leading cause of end-stage renal disease in developed and developing countries (WHO, 2008). Death due to renal disease is 17 times more common in diabetes mellitus patients than in non-diabetic patients (Hong and Chia, 1998). In a study, Alebiosu and Ayodele (2005) reported increasing prevalence of diabetic nephropathy as a cause of end stage renal disease in Nigeria.

Screening for diabetic kidney disease helps in early detection, evaluation and treatment. Consequently, multiple biomarkers of kidney injury in serum and urine have been studied. Based on the mechanisms of structural damage to the kidneys, biomarkers are classified as markers of glomerular injury, oxidative stress, endothelial damage and inflammation (Matheson et al., 2010).

This hospital-based cross-sectionalcase-control study was carried out at the diabetic and metabolic clinics of the University of PortHarcourt Teaching Hospital (UPTH) between March 2015 and February 2016. UPTH is a tertiary referral centre and the foremost teaching hospital in the South South geopolitical region of Nigeria.

The subjects were type 2 diabetics attending the Diabetic and Metabolics Clinic of UPTH. They were selected following review of their clinical history and management. Only uncomplicated cases were included in the study. The controls were age matched non-diabetic, non-hypertensive, and apparently healthy individuals not on any medication and with normal renal function. Controls were recruited from different settings outside the hospital including churches, residential neighbors of the researchers and hospital colleagues. Subjects and controls were subjected to urinalysis, blood pressure measurement and fasting plasma glucose and serum creatinine determination. The eGFR was calculated using the Cockcroft-Gault equation (Lynch and Wu, 2010) from age, weight (kg), sex and plasma creatinine value. This was done to exclude any renal impairment or disease condition.

The minimum sample size required for this study was determined using the formula below (Araoye, 2004).

The calculation was based on a prevalence rate of 6.8% observed for diabetes mellitus in a study done in UPTH (Nyenwe et al., 2003). The confidence level was set at 95% giving a calculated minimum sample size of 97 subjects. The final sample size was adjusted for a 10% non-response rate (Lott et al., 1992). Therefore, a projection of 120 study subjects (type 2 DM patients) and 120 apparently healthy subjects as control were included in the study giving a total of 240 subjects.

A systematic sampling technique was used to select the subjects. This involved the calculation of a sampling interval fraction,

, where N is the total population at the clinic, n is the daily sample size required to cover three (3) months data collection period.

The first subject was selected by simple random sampling via ballot method after which the sixth patient was selected. Approval for this study was obtained from the Ethical Research Committee of the University of Port Harcourt Teaching Hospital. Informed written consent was obtained from the subjects following disclosure of the objectives of the study. The subjects bore no cost for any of the tests. An interviewer administered questionnaire was used to obtain information on the socio-demographic and clinical characteristics of the subjects.

Data were analyzed using the Statistical Package for Social Sciences (SPSS) version 16. Assessment of statistical differences between groups was achieved with chi-square test and Student’s independent t test while Pearson’s correlation was used to assess the relationship between urinary fibronectin and urinary laminin, with microalbuminuria. A p-value of less than 0.05 was considered statistically significant. 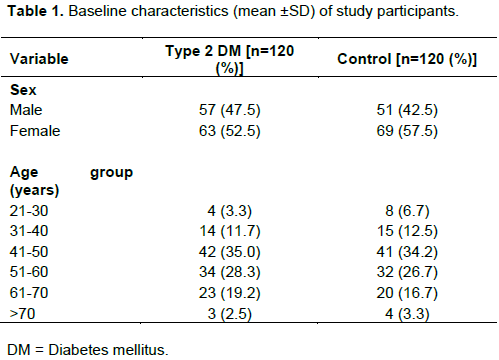 The sensitivity, specificity, PPV and NPV of urinary fibronectin as a marker of early glomerular injury were 93.9, 8.0, 27.9 and 77.8% respectively.

The sensitivity specificity, PPV and NPV of urinary laminin as a marker of early glomeralar injury were 93.9, 13.8, 29.2 and 85.7% respectively.

The receiver operator characteristics (ROC) curve for both urinary fibronectin and urinary laminin are shown in Figures 1 and 2, respectively. 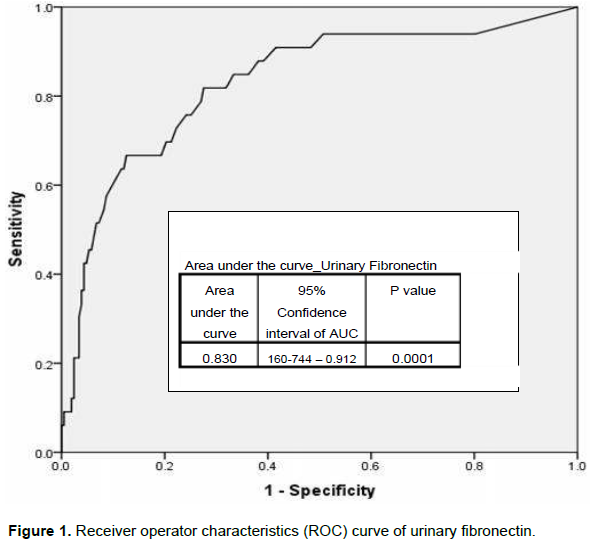 This hospital-based study noted higher number of females than males among the study population, this may not be surprising as females have been shown to have better health seeking behavior and higher utilization rate of health care services (Hosseinpoor et al., 2012).The age of the subjects ranged from 24 to 74years with the41-50 year age group constituting the peak. This agrees with the typical age of onset of type 2 DM (Dods, 2010).

The absence of previous studies on urinary fibronectin and laminin as biomarkers for glomerular injury in Nigeria precludes the comparison of the findings reported in present study with such studies in Nigeria. Thus, this study highlights the need for similar studies to be carried out in Nigeria to validate the findings and serve as a comparison to the present study. However, the findings of this study, which reveals the usefulness of urinary fibronectin and laminin as biomarkers for the detection of glomerular injury is in agreement with other studies done outside Nigeria (Hong and Chia, 1998; Fagerudd et al., 1997; Andermann et al., 2008; Miyake et al., 1993).

This study is a hospital based cross-sectional study with relatively small population size. Hence, the outcome of the research may not be extrapolated or generalized for the entire population. Also, the study was limited by high cost of reagents being that it was sponsored by the investigators.

This study suggests that assay for urinary fibronectin and laminin, both of which showed high sensitivities and negative predictive values, are useful in the evaluation glomerular injury in type 2 DM patients. Compared to urinary fibronectin, urinary laminin is a better screening biomarker for early diabetic glomerular damage. Although, the specificities of both biomarkers were low, they are good alternatives to microalbuminuria in the routine evaluation of type 2 DM patients for glomerular injuries.

The authors are grateful to the diabetic patients as well as the non-diabetic volunteers without who this study would not have held, despite not receiving any form of monetary inducement. Authors’ appreciation also goes to the nurses and laboratory scientists who in some ways made the study a success.