The species Helicoverpa armigera is one of the most important polyphagous and widely distributed pests in the world. Its occurrence was recently reported on soybean and cotton, in the states of Goiás, Mato Grosso and Bahia, Brazil. This study aimed to evaluate the occurrence and density of Helicoverpa armigera in Mato Grosso do Sul State, an important pest for agriculture and identified in Brazil in 2013. 81 Delta trap baited with H. armigera sex pheromone Biocontrole® were installed in 26 counties in the State of Mato Grosso do Sul. Results showed that H. armigera was observed in all counties installed with Delta traps. Furthermore, over 80% of collected moths belong to the H. armigera species, and the cotton regions apparently show a highest occurrence of H. armigera in the pheromone traps.

Helicoverpa armigera (Hübner, 1808) (Lepidoptera: Noctuidae) is a polyphagous pest of agricultural crops, whose larvae have been registered on more than 60 species of cultivated and wild plants, and belonging to approximately 67 botanical families (Fitt, 1989; Pogue, 2004). H. armigera can cause damage to various economically important crops, such as cotton, soybeans, sorghum, corn, tomatoes, and fruits (Reed, 1965; Fitt, 1989; Moral Garcia, 2006).

Their caterpillars fed on leafs and stems, but its preference is for new plants parts, inflorescences, fruits and pods (Reed, 1965, Wang and Li, 1984), causing damage to both vegetative and reproductive stages. Direct damage to the structures of flowering and fruiting of host plants by H. armigera caterpillars and the extensive use of insecticides result in low productivity and high costs of control, respectively (Lammers and MacLeod, 2007; Fathipour and Naseri, 2011).

The economic impacts of this pest with control costs and yield losses were estimated in approximately US$ 5 billion worldwide annually (Lammers and MacLeod, 2007), and recently estimated in up to US$ 72 billion per annum in USA (Kriticos et al., 2015). In Brazil, damage reports reached approximately US$ 0.8 billion in the first crop season (2012/13) after pest occurrence (Bueno et al., 2014).

Since this pest was registered in Brazil, the Brazilian Government has prioritized the registration of new insecticides to control H. armigera (Brasil, 2015). However, the real distribution on Brazilian territory is still unknown. Thus, this study aimed to evaluate the occurrence and density of H. armigera in Mato Grosso do Sul State, Brazil.

81 Delta traps provided by Biocontrole® (Figure 1), baited  with  the synthetic sex pheromone of H. armigera were installed in 26 counties in the state from June through September 2014 (inter-season). Counties Água Clara, Amambaí, Antônio João, Aral Moreira, Bandeirantes, Bela Vista, Bonito, Caarapó, Camapuã, Cassilândia, Chapadão do Sul, Costa Rica, Douradina, Fátima do Sul, Itaporã, Jardim, Laguna Carapã, Maracaju, Naviraí, Paraíso das Águas, Ponta Porã, Rio Brilhante and Sonora three traps were installed for each location, while the counties Dourados, São Gabriel do Oeste and Sidrolândia four traps were installed. The predominant agricultural landscapes in each sampling site are given in Table 1, and reflects the crops used in the inter-season. These counties were selected according to the most important agricultural areas throughout the State of Mato Grosso do Sul, Brazil. Delta traps were installed 50 cm above the plants canopy, and evaluations were performed weekly, when adhesive floors were changed. Sex pheromone capsule was changed monthly, according to the manufacturer. After removal of adhesive floors, these were packed with PVC film, and transported to the Foundation MS laboratory for identifying the genus of collected moths. It was registered the number of moths of the genus Helicoverpa spp. and other species collected by the traps in each County. 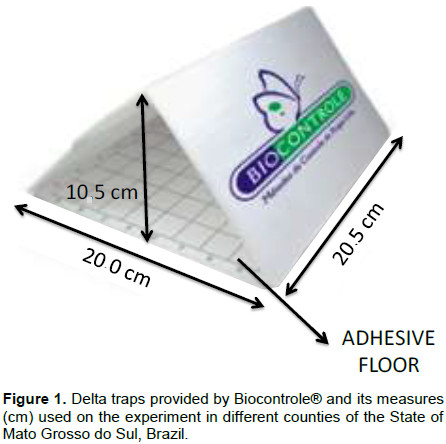 The moths of the genus Helicoverpa spp. were sent to the Agronômica laboratory (located at Porto Alegre, RS, Brazil) for identification of the species. The method used for this was morphological analysis of the male genitals (Hardwick, 1965; Pogue, 2004). This laboratory is accredited by the Ministry of Agriculture, Livestock and Supply for the issue of pest identification reports (Brasil, 2014). To guarantee the sampling quality, moths were sent within 24 h after adhesive floor was collected to provide good conditions for species identification.

The results obtained showed a prevalence of H. armigera species in relation to Helicoverpa zea (Boddie) (Lepidoptera: Noctuidae) in the State of Mato Grosso do Sul, Brazil. It was collected 277 (83.7%) of H. armigera moths in the sampling period, 40 (12.1%) moths of H. zea, while 14 (4.2%) individuals that could not be identified (Figure 2). Unidentified moths were related to the female moths of Helicoverpa genus, which prevents the use of the adopted identification method, or damaged moths during shipping process to the laboratory. 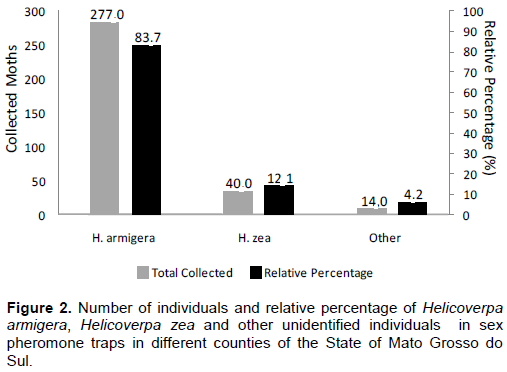 Specimens of H. armigera were observed in all counties, showing this pest is wide spread throughout Mato Grosso do Sul State. Counties with the highest incidence of H. armigera were Água Clara, Camapuã, Chapadão do Sul, Costa Rica, Paraíso das Águas, São Gabriel do Oeste, Sidrolândia and Sonora, which almost all are situated in the northern part of the State, where cotton is grown during the season. Counties Antônio João, Bandeirantes, Bonito, Caarapó, Laguna Carapã, Naviraí and Rio Brilhante showed occurrence of collected individuals in moderate amount. Counties Amambaí, Aral Moreira, Bela Vista, Cassilândia, Douradina, Dourados, Fátima do Sul, Itaporã, Jardim, Maracaju and Ponta Porã, which mainly grow soybeans, showed a low occurrence of the pest in the pheromone traps (Figure 3).

It is important to highlight that Água Clara, Camapuã, Chapadão do Sul, Costa Rica, Paraíso das Águas, São Gabriel do Oeste, Sidrolândia and Sonora are cotton grower counties during the regular season, while the other counties are soybean grower during the regular season. Agricultural landscapes presented on Table 1 refer to crops when the experiment was conducted (inter-season). These results suggest that the kind of crop in the area can influence the pest density, and also its distribution throughout the State. 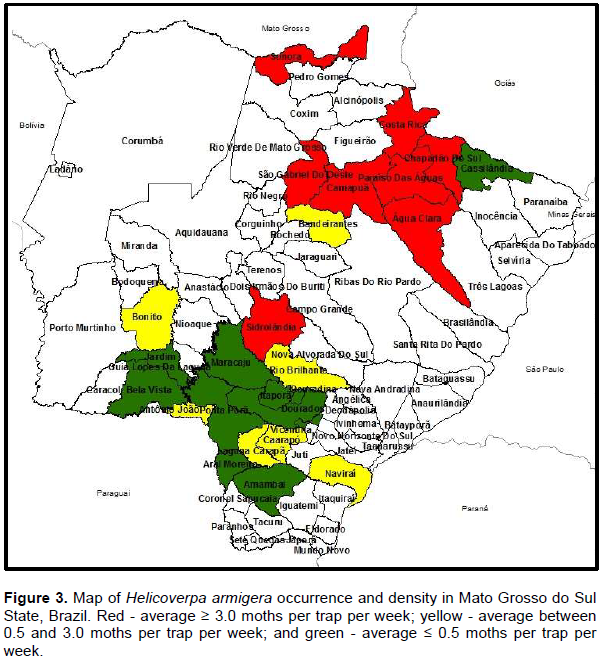 The management of H. armigera populations poses great challenges for the Brazilian soybean farmers, because the lack of information available on the chemical and biological control of this pest in Brazil. These difficulties led  the  Brazilian  Ministry  of  Agriculture  and Food Supply to take immediate measures, such as the emergency registration of insecticides for the control of H. armigera. It makes the control recommendations susceptible to doubt and errors (Perini et al., 2016).

These results are critical to preview H. armigera outbreaks on a State basis, and this can contribute to reduce the economic impact of this pest on crops, and also to develop monitoring and pest management programs in Mato Grosso do Sul, Brazil.

It gets more important if we consider insecticide resistance of H. armigera worldwide. Due to its wider host range, high fecundity, multiple generations, migratory behavior and insecticide resistance, it has become a much more difficult pest to manage (McCaffery, 1998). The frequent and indiscriminate use of insecticides has resulted in the development of resistance in many insect populations (Ferre and Van Rie, 2002; Sayed and Wright, 2006). Moderate to high levels of resistance to Pyrethroid, organo-phosphate, fenvarelate, phoxim, and emamectin benzoate insecticides were previously reported in a field population of H. armigera (Ahmad et al., 1995; Yang et al., 2013).

Based on the results obtained, it can be concluded that H. armigera is probably widely distributed in all counties in the State of Mato Grosso do Sul that grow soybean and cotton. However, the traditional cotton regions apparently show a highest occurrence of H. armigera in the pheromone traps.  In addition, it was found that over 80% of individuals caught in traps with sex pheromone belong to H. armigera species. It is suggested that further studies should be carried out to check the damage caused by H. armigera in different crop systems in order to determine the damage that this pest can cause in each crop.

The first report of H. armigera in Brazil was in 2013 (Czepak et al., 2013), realized on a pest outbreak in 2012/13 season. However, the analysis of insects previously collected and deposited in museums by several authors (Teston and Corseuil, 2004; Specht et al., 2005, 2013; Zenker et al., 2010) suggested that at least in the State of Rio Grande do Sul, Brazil, the introduction of H. armigera occurred after December 2008 and before May 2011 (Sosa-Gomez et al., 2015). According to the same authors, the earliest H. armigera samples mentioned in the published literature are from May 22, 2012 (Leite et al., 2014) and one larvae of H. armigera in soybean fields from Rolândia county, State of Paraná, in October of 2008 (Sosa-Gómez et al., 2015). Based on the evidence provided by these data and considering a scenario of introduction of H. armigera in the country before 2008, it is reasonable to infer that this pest had enough time to build up populations detected as outbreaks in the 2012/2013 growing season (Embrapa, 2013; Sosa-Gomez et al., 2015).

The detection of H.armigera as a devastating component in high-value commercial   crops,such as   cotton and soybean (Czepak et al., 2013; Sosa-Gomez et al.,  2015), shows the vulnerability of Brazil and other countries in South America regarding quarantine pests. Additionally, efforts to elucidate invasion paths and origin are essential to design strategies for preventing future pest introduction and adopting science-based policies (Estoup and Guillemaud, 2010; Guillemaud et al., 2011).

2. Most of individuals caught in delta traps with sex pheromone belong to H. armigera species.