Fruit flies are regarded as one of the most devastating pest of fruits and vegetables on earth planet. Generally chemical control is implemented for their control but it poses lot of eco-environmental concerns so the emphasis is now turning towards eco-friendly management practices.  Bio-control is an efficient and environmentally sound approach and augmentation is primarily focus on classical biological control program. In this study, eight sub-sterilizing doses of 0, 20, 30, 40, 50, 60, 70 and 80 were tested against Bactrocera zonata and Bactrocera cucurbitae pupae. The results showed that radiation prolong the duration of pupal stage and hatching is reduced by applying radiation. This also shows that when the quantity of the radiation increases, the adult emergence decreases. This study could be very useful in exploiting the potential host for longer period of time for culturing their pupal parasitoids.
Key words: Sub sterilizing doses, radiation, fruit flies and emergence.
Abbreviation:

Fruit flies are of significant economic importance as pest in many of the important fruits. These are controlled generally by applying pesticides but these pesticides cause lot of environmental concerns  and also on human health (Gill and Garg, 2014) moreover the fruit flies have attain resistance against pesticides (Van Steenwyck et al., 1975) so the focus is now diverting towards other control practices in which sterilization using radiation is an important tool.  Nuclear techniques are already being practically applied convincingly in various areas of entomology (Bakri et al., 2005). These are used against the different insect pest for suppressing the activity of insects (Faruki et al., 2005). The immature stages of the insect are most likely vulnerable to radio activity (Tilton and Brower, 1983). Additionally, radiation can be applied to semi- or completely sterilize hosts or prey for deployment in the field to increase the initial survival and build-up of natural or released biological control agents in advance of seasonal pest population build-up (Hendricks et al., 2009). By applying radiations the emergence of adults decreases (Faruki et al., 2007). It is also reported that emergence of black cutworm at different radiation doses applied on egg stage decreases the hatching and induced sterility in adults, more over it prolong the larval and pupal stage of the insect (Salem et al., 2014). The objective of current is to evaluate the emergence of adult fruit flies by irradiating the pupae at different doses.

Adult emergence percentage of B. zonata and B. cucurbitae from the one day old pupae irradiated at different doses
The experiment was conducted at fruit flies rearing laboratory, Nuclear Institute of Agriculture (NIA), Tandojam, Pakistan. The pupae of two fruit fly species, Bactrocera zonata and B. cucurbitae were obtained from their respective colonies being maintained in NIA at temperature 27±2 and relative humidity about 40-45% for the last several years. Then these pupae were radiated from Nuclear Institute of Medicine and Radiopathy (NIMRA) Jamshoro which is about 60 km from NIA by using gamma radiation source of Atomic Energy of Canada Limited Co-60 Ottawa, Ontario, Canada having Model GWXJ80 with dose rate of 1.20 Gy per minute. Radiations were applied at different doses ranging from 20 to 80 Gy to one day old pupae to check the emergence of fruit flies adults. The pupae irradiated at different doses and of two different species are kept in petri dishes separately then calculate the emerged adults from the pupae, meanwhile the un-emerged and half emerged pupae are also calculated. Data analyzed statistically using variance followed by DMRT test by using statistical software statistix 8.1. 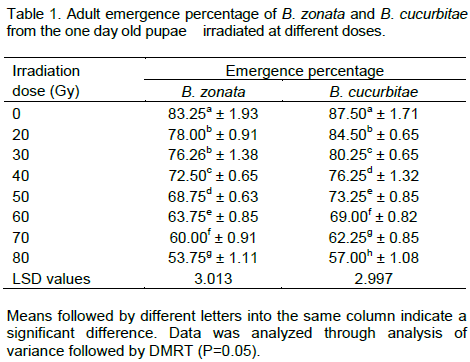 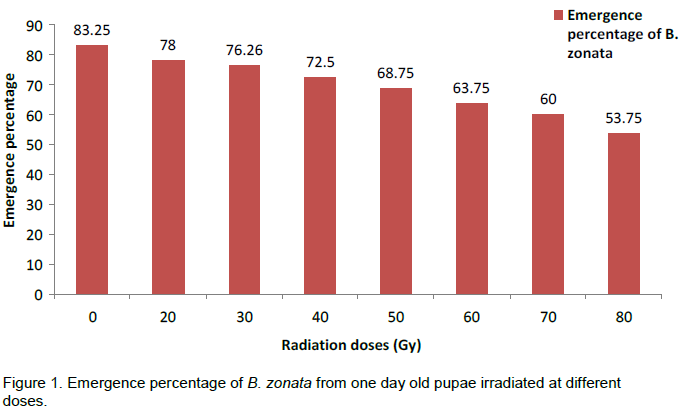 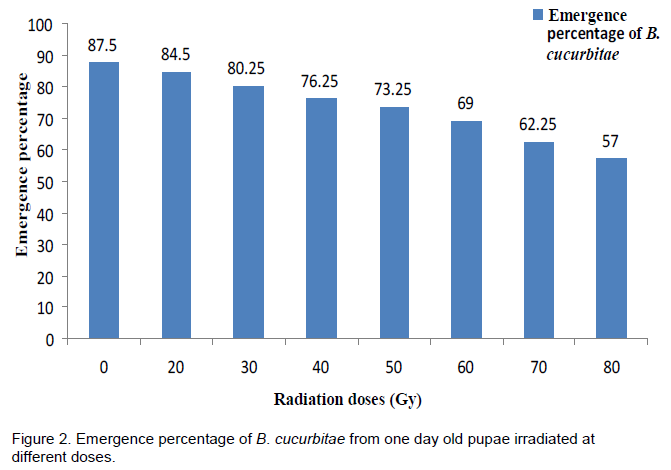 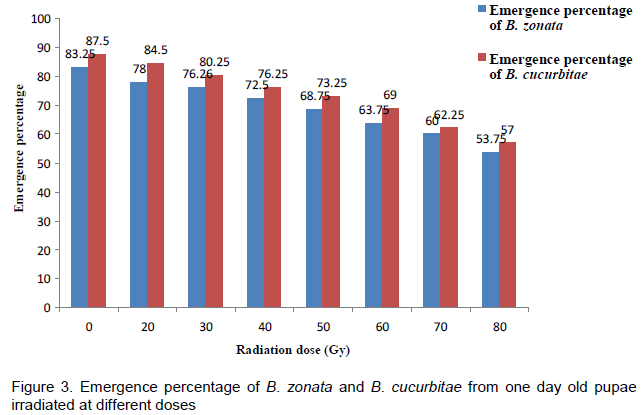 These studies indicated a wide range of tolerances in the usage of irradiation for rearing of the fruit fly pupal parasitoids. However, the emergence of the adult fruit flies decreased with the increasing doses of radiation. Similar results were reported by Lo´ pez-Mart?´nez and Hahn (2014). This may be very useful in reducing the chance of releasing the fertile fruit flies in the target areas that may have been left un-parasitized in the parasitoid rearing colony. The emergence of the adult fruit flies from the B. cucurbitae was comparatively higher than the B. zonata that may be due to the size of the pupae. As the effects of the radiation appears interrelated to the size of the pupae and the pupal size of the B. cucurbitae is bigger than B. zonata which resulted comparatively higher number of B. cucurbitae adult emergence at same radiation doses than B. zonata. Similar finding was observed by Bustos et al., (1992). Their studies provided significant support for irradiation of hosts before exposing to the parasitoids. The emergence of the parasitoids from the irradiated fruit fly pupae clearly demonstrated that the use of irradiated pupae (host) does not depict any negative effect on parasitoids. A number of studies conducted in Mexico have demonstrated a very high efficiency of the parasitoids cultured on irradiated hosts (Montoya et al., 2000).
Moreover the present studies showed higher parasitism on irradiated pupae at the dose of 40 to 50 Gy in comparison to the un-irradiated pupae.