Transformation of natural landscapes is the leading cause of global biodiversity decline. This is often exacerbated through anthropogenic activities that result in the alteration of natural ecosystem. Displacement of local species is characteristics of this process and this is of negative consequence especially for species in mutualism. In this study, how grazing and mowing activities influence flower-insect interactions and communities of interacting partners was assessed. Insect-flower interactions were sampled in four replicates, each of grazed and mowed grasslands in a moderately disturbed ecosystem. Mean distance to natural areas was determined during the study to assess the buffering effect of these natural areas on insect-flower interactions in the local habitats. Flower visiting insect species richness and abundance were not significantly different between grazed and mowed grasslands; however, flowering plants richness and abundance were higher in grazed grasslands. Mean number of interactions was also higher in grazed grassland as compared to mowed. Furthermore, mean number of interactions reduced with increase in distance from the forest. This study showed the importance of natural habitat as a refuge for displaced flower-visiting insects from disturbed areas in a transformed landscape. Mutualistic partners in interaction tend to be resilient to moderate disturbance such as grazing in this study; however, an increase in the intensity of disturbance above the moderate threshold may result in a breakdown of interaction networks.

Transformation of natural ecosystems through influences of anthropogenic activities is the leading cause of global biodiversity decline (Butchart et al., 2010). Human landuse change through agricultural practices and intensive management of ecosystems results in fragmentation of natural landscapes and the displacement of important species (Winfree et al., 2009). Some of these species are highly threatened and the conversion of their natural habitat can otherwise result in the complete loss or local extinction of the species (Kuldna et al., 2009). The dependence of some species on other available resources in the ecosystem can aid the loss of these species due to loss in interacting partners (Tylianakis et al., 2010). This is evident in insect-flower interactions where mutual benefits are derived from interacting partners in a food web (Memmott et al., 2004). Flower-visiting insects influence ecosystems indirectly by aiding the success of plant communities which are essential components of natural ecosystems (Losapio et al., 2016). Plant communities however can be modified directly through livestock grazing. This enhances removal of food resources and suitable habitats for flower-visiting insects. This process causes a disruption in the interaction networks through the removal of flora resources which are essential for the flower-visiting insects during grazing (Sjodin et al., 2008). Other anthropogenic activities such as mowing and trampling have been shown to impact on flower-visiting insects and their interaction networks in grasslands (Adedoja and Kehinde, 2017). These anthropogenic stressors may result in the removal of nesting sites of flower-visiting insects especially bees and a high mortality of these insects may be recorded through this process (Diekotter et al., 2007). Grazing activities is not in totality negative especially to the flower-visiting insects’ community. In a study by Gobbi et al., (2015), grazing did not change the community structure and functional traits of carabid beetles on the European alps; however, a higher disturbance from mowing negatively influenced the species assemblages of these beetles.
The effect is dependent on the intensity of grazing (Wallis et al., 2007), the target insect taxonomic groups and the requirements of such insect groups (Sjodin et al., 2008). Grazing at low intensities may create nest sites and suitable habitats for some groups of flower-visiting insects such as the ground-nesting bees (Vulliamy et al., 2006). Furthermore, the trampling of the soil might create more cavities for the ground nesting flower-visiting insects which is important for their persistence in the ecosystem (Vulliamy et al., 2006; Murray et al., 2012). Also, some groups of flower-visiting insects thrive better in moderately disturbed ecosystems (Michener, 2007). There is a great potential for species to persist better at intermediate level of stress in an ecosystem; however, there is likely to be a decline once this intermediate stress level has been exceeded (Svensson and Calsbeek, 2012). This is also applicable in livestock grazing effect on plant and insect communities in a landscape. The degree of grazing will determine the rate of loss of flowering plants as well as important flower-visiting insect species (Sjodin et al., 2008). Distinctive responses of different species of plants and flower-visiting insects to grazing have been observed in previous studies. This may be linked to the specific requirement of different species of plants and flower-visiting insects in interaction (Goulson, 2003). Hegland et al. (2010) recorded a decline in the population of a shrub with increase in grazing intensity. While, the effects of grazing on plant and flower-visiting insect communities have been well studied, it is essential to understand how this influences insect-flower interaction network properties. Here, differences in the topology of insect-flower interaction networks in grazed and mowed grasslands in a tropical biodiversity hotspot were investigated. This will provide timely information that will be beneficial for the conservation of this ecologically important interaction.

The study was carried out in Ile-Ife which is located between latitudes 6°57’05”N and 7°35’19”N and longitudes 004°20’41”E to 004°46’21”E, Osun State, Nigeria (Figure 1). Ile Ife (south-western Nigeria) is located in the rainforest region of Nigeria situated within the West African Forest biodiversity hotspot. The weather of the area is characterized by wet and dry seasons which last from March to October and November to February, respectively. The study area is constantly influenced by human activities with various degrees of local scale habitat disturbances and landscape fragmentation that isolate grasslands from secondary forests. Local scale disturbance in grasslands are either from regular mowing of these sites especially in grasslands located close to urban areas or cattle grazing in grasslands found within suburban areas. The study involved sampling of insect-flower interactions in two grassland types: grazed and mowed. The former type was represented by four replicates located within suburban areas. These study sites had the following flowering plants; Tridax procumbents L., Sida acuta Burm. F, Corchorus sp. L., Mimosa pudica L., Talinum triangularea (Jacq), Aspilia africana (Pers) C.D. Adams, Indigoferasp. L., Chromolaena odorata (L.), Stachytarpheta cayennensis (Rich.) Vahl, Ageratum conyzoides L., Ipomoea sp. L. and Vernonia cinerea Schreb. Some of the trees sparsely distributed in these study sites are Elaeis guinensis Jacq., Bambusa vulgaris Schrad., Gliricidia sepium (Jacq.) Kunth, Newbouldia laevis (P. Beauv.) Seem. ex Bureau, etc. These sites were grazed by cattle with a range of 15-20 cattle on each study site (average of 3 cattle per hectare for each study site); thus, resulting in minimal disturbance in the grazed sites with presence of patches of undisturbed strips of flowering plants. The latter type was represented by four replicates of mowed grasslands located within urban areas. The sites were constantly perturbed by mowing activities most especially when the grasses and flowering plants were over grown. The study sites had the following flowering plant species: T. procumbens, Commelina congesta, Synedrella nodiflora, S. acuta, T. triangularea and V. cinereae. 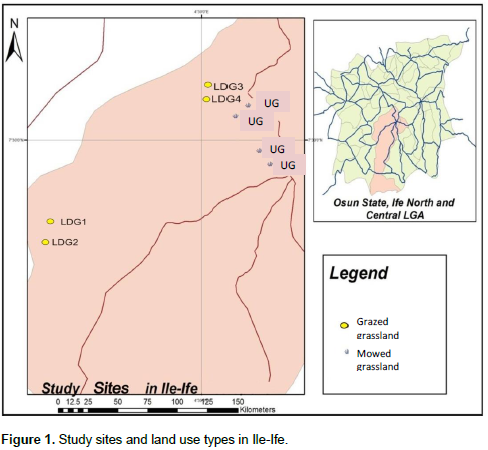 Disturbance at the landscape scale
Apart from local scale disturbances on the different sites, effect of disturbance at the landscape scale was also considered. The index of disturbance used was distance of each study site to the nearest secondary forest habitat and this was done according to Kruess (2003). These studies showed that distance of site to the nearest forest or natural habitat is an indication of degree of fragmentation or habitat loss at the landscape level which may have impact on the species richness and abundance of flower-visiting insects on each site. Distance of the site to forest was measured using Geographic Information System (ArcGIS 10.3).
Sampling of insects-flower interactions
Insect-flower interactions were sampled on all the study sites for a period of eight months between July 2016 and February 2017 covering both rainy and dry seasons. Sampling of insects was conducted on days with most favorable weather condition, that is, days without rainfall and with little or no cloud cover. Sampling was carried out between 09:00 – 14:00 h on each sampling day. Sampling was carried out on a monthly basis on each study site following the method described by Cane et al. (2000) and Rousltonet al. (2007). Insects visiting the floral part of flowering plants along transects were observed, collected with sweep net and recorded. Insects were sorted based on morphological features with the aid of a hand lens and dissecting microscope (Model - Zeiss Steimi, 2000) and were later grouped into different taxa. Identification of insects was done using various identification keys such as Michener Taxonomic Key (Michener, 2007) for bee, Butterfly of West Africa (Larsen, 2005) and Common Butterflies of IITA (Safian and Warren, 2015) for Butterflies and insects that could not be identified with the available keys were identified at Museum of Natural History, Obafemi Awolowo University, Ile-Ife and Biosystematics Division of Plant Protection Research Institute, ARC, Pretoria, South Africa. Identification was done to species level and where not possible to family and genus levels. The flowering plants visited by the insects were also collected by cutting the flowering part of the plant for later identification at Ife Herbarium, Ile-Ife.
Statistical analysis
Illustrative bipartite network was constructed using the bipartite package in R for each study site. Interaction network matrices which include network nestedness, specialisation, connectance, Interaction Strength Asymmetry (ISA) were computed. Network nestedness explains the probability of specialised species in a network to interact with species that are in interactions with most generalised species. This explains overlap in the network based on frequency of interaction observed where more nested networks are more resilience to anthropogenic disturbance (Tylianakis et al., 2010). Network connectance on the other hand is the proportion of realized interactions out of all possible interactions in a network (Bluthgen et al., 2008). This is also a measure of network specialisation which estimates the selection and constancy of interaction between partners in a network by calculating the deviation of observed interaction from the expected null frequencies of interactions (Bluthgen et al., 2006). This value ranges from 0 (generalized network) to 1 (perfect specialized network). Interaction strength asymmetry (ISA), as the strength and degree of interaction between partners is not usually the same in a network, it means that the effect of an interaction made by an insect to a flowering plant is not the same as the effect of interaction that the plant has with the insect (Vasquez et al., 2007). Species level analysis was also performed for the specialisation of flower-visiting insect species. Generalized linear model (Glm) with a specification of Poisson error distribution was used to compare the network indices among grassland types. Distance to the forest data was log transformed to fit normal distribution and the effect of this on interaction frequency was computed using linear regression. All analyses were performed with R (version 3.4.1, R Development Core Team, 2017). 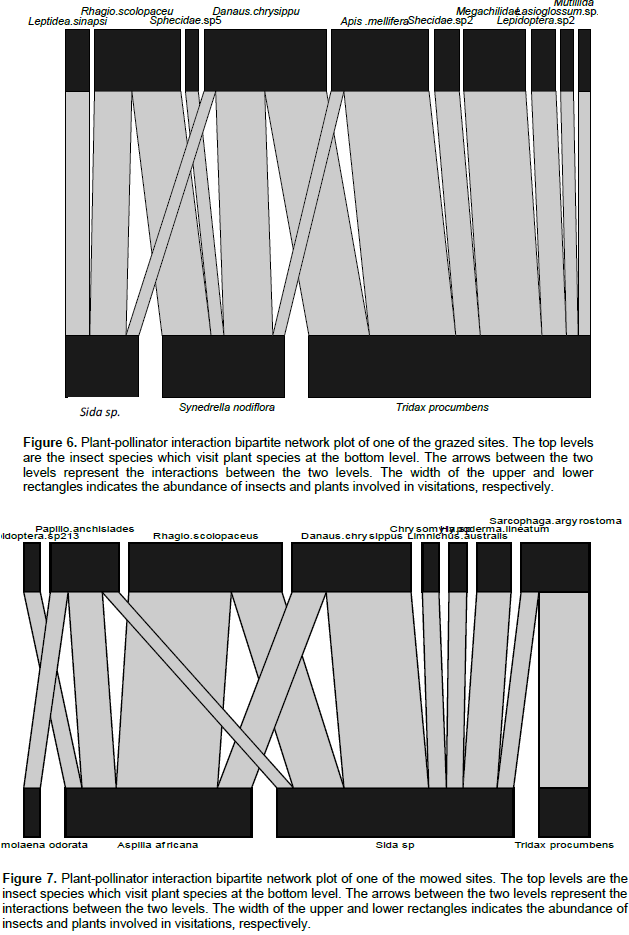 Network indices are important tools for understanding ecological processes in ecosystems. This may be more important for the assessment of threats rather than the conventional use of species richness and abundance. Moderate disturbance in the ecosystem may be beneficial to insect-flower interactions. Grazing just like any other form of disturbance is intensity dependent and threats to flower-visiting insects and insect-flower interactions may not be significant when the intensity is minimal. The availability of forest around disturbed areas may be important on the landscape scale in masking the effect of the anthropogenic disturbance on flower-visiting insects and their interactions with flowering plants on the local habitat scale. This underscores that forest can be an important factor for the conservation of flower-visiting insects and insect-flower interactions, especially in the age of increasing landscape fragmentation.