Understanding the growth and reproductive efficiency of vermicomposting worms in various substrates is highly essential for effective utilization of earthworms in sustainable waste management system. The growth and reproductive performance of Eisenia fetida in rose, hypericum and carnation flower wastes was evaluated in this microcosm study. Determination of cocoon production rate, hatching success, number of hatchling, biomass and growth in all the three flower waste type were conducted in cylindrical plastic containers. The experiment were designed under three treatment: T1 (rose leftover + cow dung), T2 (hypericum leftover + cow dung) and T3 (carnation leftover + cow dung). Cocoon production started early (within 2 weeks of clitellated worm introduction) in T1 and T2, while it took 4 weeks in T3. The highest total number of cocoon was attained in T2 (178.3 ± 2.8), whereas the minimum cocoon number (109 ± 2.6) was recorded in T3. Significant difference was recorded between the cocoon production performance of E. fetida in all the three varieties of flower leftovers (P< 0.05). The highest total number of hatchlings (52 ± 0.88) was recorded in T1, while the least (30.33 ± 0.6) was observed in T3. Maximum weight increase (0.86 ± 0.006 g/worm) of E. fetida was observed in T1. The overall result of this study showed that better hatching success of cocoons and number of hatchling/cocoon were obtained by experimental species incubated in rose leftover.

Earthworms are hermaphrodites, both male and female reproductive organs are present in every single earthworm but self-fertilization does not generally occur. Earthworms   have   beneficial   physical,   chemical   and biological effects on soil and many researchers have documented that these effects can increase the plant growth and productivity (Sinha et al., 2002; Amador et al, 2013). Since earthworms represent the domin a group in mesh and left over for 48 h to stabilize before laying them in to experimental containers. The experiments were conducted in cylindrical plastic containers. Each container was filled with each experimental waste material based on the feeding rate explanation of Ndegwa et al. (2000). Three replicates were prepared for each substrate and worm combination. 5 freshly clitellated E. fetida, in good health condition, were collected from the stock culture and rinsed with distilled water to remove any adhering material, dried briefly on paper towel, weighed with electronic balance and finally introduced in each container containing one of the experimental treatments. The substrates in each treatment container were examined daily in order to determine the onset of cocoon production. Once the cocoons appeared, they were separated by hand sorting, washed lightly in distilled water and counted so as to determine total number of cocoon and the fecundity or reproductive rate (cocoon/worm/day).  temperature was kept within the range of 23-27°C throughout the study period (Chauhan and Joshi, 2010). Each experimental waste in this experiment was designated as follows. T1 = rose leftover + cow dung (3:1), T2 = hypericum leftover + cow dung (3:1), T3 = carnation leftover + cow dung (3:1). interval) weighed, oven dried at 105°C and cooled in desiccators for 1 h and reweighed. The difference between moist and dried samples were taken and then the moisture content of beddings was adjusted to 60 to 70% and the
Experimental design for reproductive potential (cocoon production rate) determination
Since worms could not survive in fresh cattle and vegetable wastes (Gunadi and Edwards, 2003), all the waste materials and the cow dung used for the experiment were air dried for 48 h and chopped into small pieces and sieved with 2 mm
Experimental design to study cocoon incubation period, hatching success and number of hatchlings
To determine the incubation period (time lapse from cocoon formation until the first hatchling emerged in days), hatching success (total number of hatched cocoons), and number of hatchlings per cocoons, fifteen freshly laid cocoons from each treatment were taken from the above containers and placed in containers which contained the same material in which their parents were reared. Three replicates were prepared for each treatment. The beddings were observed daily for the emergence of hatchlings in order to determine the incubation period. As soon as the appearance of hatchling started, they were removed daily using a fine painting brush and counted by hand sorting in order to determine the total number of hatchlings that emerged from a single cocoon. The number of unhatched cocoons was also counted in order to determine the hatching success of cocoons.
growth and development of E. fetida. In addition to the food quality of the substrate, other factors such as temperature, pH and moisture of substrate have effect on growth and survival of the worm (Jicong et al., 2005).
In spite of various studies on reproductive and growth potential of popular vermicomposting species of earthworms, mainly on E. fetida, on a range of wastes from various origins, no study have been carried out on the life cycle pattern of this worm on commonly dumped and littered wastes in flower farms of Ethiopia. In view of this gap in knowledge, this study was particularly carried out to evaluate the suitability of carnation, hypericum  and rose wastes, which are hardy herbaceous plant (except hypericum) (Tah and Mamgain, 2013) for survival of the vermicomposting species, E. fetida in terms of growth and reproductive parameters.
(2014) and Nath et al. (2009) have also described substrates that provide earthworms with sufficient amount of easily metabolizable organic matter, facilitate growth and reproduction.
Because of the direct correlation between food availability and quality with the growth and reproduction of earthworms (Dabral et al., 2013), different researchers investigated the growth and reproductive potential of different species of earthworms on various wastes generated from both industrial and household sources. The reproductive and growth performance of Hyperiodrius africanus was evaluated in tropical weed (Chromolaena odorata) and coffee residues by Tandon (1998). Bhat et al. (2015) measured the growth and reproduction of E. fetida in bagasse feed, while Parthasarathi and Ranganathan (1999) studied the growth and reproductive potential of Perionix excvatus and E. fetida on pressmud. Govindarajan et al. (2008) made growth and reproductive assessment of E. fetida on Leucaena glauca leaf litter, Nath et al. (2009) studied the effect of different combinations of animal dung and agro/kitchen wastes on the soil habitat, currently they are becoming the best candidates for soil fertility tests as well as suitable bio indicators of chemical contamination of the soil (Sorour and Larink, 2001; Bustos-Obreg and Goicochea, 2002). Certain species of earthworms have also a great advantage for biological transformation of a wide range of organic wastes into valuable biological fertilizer or vermicomposting.

Experimental design for biomass, maturation and cocoon production date
For biomass determination, exactly the same kind of experimental treatments and containers were used as for the above reproductive potential determination. Each container was filled with each experimental treatment based on the feeding rate determination of Ndegwa et al. (2000). Five hatchlings (approximately 2 weeks old) of E. fetida in good health condition, were taken from the above containers for reproductive potential determination. The hatchlings were rinsed with distilled water to remove any adhering material, dried briefly on paper towel, weighed on electronic balance and finally introduced in each respective experimental container with each type of experimental treatments. The weight of the hatchling in the initial day was in the range of 0.2 to 0.2g. Three replicates for each treatment were established.
To monitor the growth and maturation progress weekly, for 17 weeks, the biomass was measured in batch of earthworm in each container and three phases of the life cycle were observed, Preclitelleate (incipient development of the clitellum, identified by appearance of tuberculapubertasis), clitelleate (well-developed clitellum) and regression (loss of the clitellum). At the same time, the first cocoon production date for each worm-waste combination was also determined. The worms were weighed without voiding their gut content. No corrections were applied for gut content to any data in this study. No additional feed was added at any stage during the study period. On the basis of the obtained data on the biomass of the worms other parameters of earthworm such as growth rate or biomass increase rate (g/earthworm/day), maximum weight achieved, net weight gain, relative growth rate and specific growth rate were calculated. To calculate the relative growth rate (the percentage ratio of the maximum weight gained to the initial body weight) and specific growth rate (the percentage weight gained with time), the following formula were applied (Sogbesan and Ugwumba, 2006): 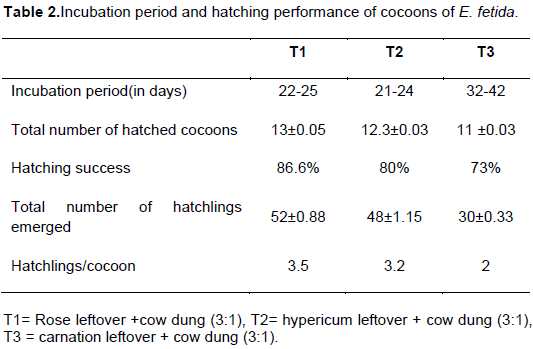 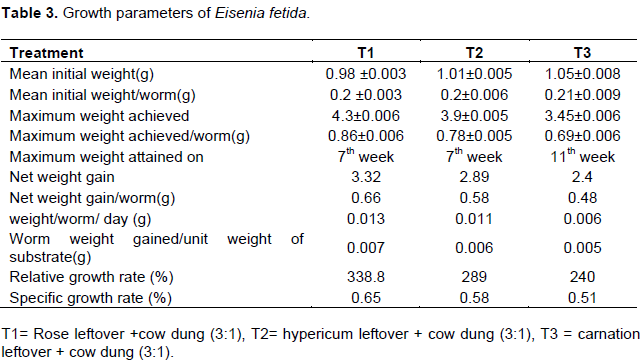