Saudi Arabia is a sub-tropical country, with a warm climate that favors the multiplication of microorganisms and destructive pests of stored products (Tirado et al., 2010). Tribolium castaneum is one of the most destructive beetle pests of stored products and a major pest of cereals worldwide especially in tropical and sub-tropical regions (Islam and Talukder, 2005). Damage to agricultural crops both in the field and during harvest and storage due to fungi is also very considerable as it reaches billions of dollars around the world (Kendrick, 1992). Insects, nematodes, fungi, and microorganisms constantly compete with humans for these commodities. In a closer look, interactions of these organisms might be more complicated. The stored wheat flour is subjected to invasion with the red flour beetle, Tribolium castaneum (Wakil et al., 2003).
the majority of these fungi are aphids, whiteflies, leaf-hoppers, flies, beetles, caterpillars, thrips, mites and some beetle larvae.
The most recorded entomopathogenic fungi species were, Beauvaria bassiana, Asperigillus, Penicillium, Metarrhizium, Tolypocladium, Isaria, Lecanicillium Aschersoniabadia, Aachersonia marginata,   Aschersonia samoensis,   A. oxystoma,   A. placenta, A. confluens, Hypocrellasia mensis, Moelleriella raciborskii, Hypocrella calendulina, Paecilomyces cinnamomeus,  Conoideocrella tenuis and  Verticillium spp. (Lord, 2001; Shah and Pell, 2003). Lawrence and Milner (1996) and Shah and Pell (2003) indicated that Ophiocordyceps unilateralis, O. myrmecophila, Torrubiella sp., Isaria sp., Paecilomyces lilacinus, Isariatenuipes, Gibellula pulchra, Nomuraeaa typicola, Hirsutella formicarum, Metarhizium sp., Akanthomyces pistillariiformis and Hirsutella citriformis are entomopathogenic fungi applied as biocontrol agents. In addition to the previously mentioned fungi, Akanthomyces, Aschersonia, Beauveria, Conoideocrella, Cordyceps, Gibellula, Hirsutella, Hymenostilbe, Hypocrella, Isaria, Metarhizium, Moelleriella, Nomuraea, Ophiocordyceps, Paecilomyces, Torrubiella and Verticillium are entomopathogenic fungi and associated with many insects.
The goal of this work was to isolate and identify fungi naturally associated with T. castaneum and to study the effect of these fungi on their insect hosts and to keep them as stock for further research concerning biological control application.

Source of wheat Flour samples
Twenty-four wheat flour samples in paper packets of 1 Kg each purchased from Jazan local markets in Saudi Arabia were stored at room temperature (22 - 35°C) and 65- 68% relative humidity for two years. The mean temperature and relative humidity were as follows; January daytime highest temperature was 88°F (31°C) and lowest was 71°F (22°C), while July had average daytime highest temperature of 104°F (40°C) and lowest of 86°F (30°C) (Bosly and Kawanna, 2014). At the end of the storage period, the flour was characterized with yellowish color and undesirable odors. The flour were checked for the presence of pests, insects and fungal species associated with or affecting them.
Separation and identification of the affected insects
The insects existing in the flour were separated and identified as Red flour beetle T. castaneum according to the key given by Hinton (1945) and Bousquet (1990).
Isolation of fungi associated with the separated insects
Isolation of fungi associated with the separated T. castaneum was done in three successive stages as follows:
Separation of the affected insects
The dead bodies of T. castaneum (60 individuals) separated from the flour using a silk sieve, were cleaned by the aid of camel hairbrush to remove the flour. The insect's dead bodies were inspected by the binuclear for any deformations or decomposition. The individuals exhibited abnormal deformation, decomposition and or superficial fungal growths were photographed by a (zoom in) digital camera.
Incubation of the candidate insects
The individuals of T. castaneum that showed decomposition or fungal growths were incubated to allow the emergence of fungal growth from both outside and inside the affected insects. For incubation, plastic Petri dishes (9 cm) each containing sterilized filter paper (Whatman No1) were used. Sterilized glass slide was fixed above the filter paper. Using sterilized fine tip forceps, the individuals were transferred and put above the slide. Two indivi-duals were put on each slide. The filter papers were kept wet by dispensing 1 ml of sterilized distilled water according to  Dhingra and Sinclair (1985).The dishes were covered and sealed using para film and incubated at 25±2°C for 7 days. After elapse of the incubation period, insects were checked for emergence of fungal growth by the binuclear and the individuals that the fungi observed on their surfaces were labeled and used in the isolation experiment.
Isolation and identification of the emerged fungi
For isolation of the emerged fungi associated with the insects, Petri dishes (9 cm) containing PDA medium were used. Aseptically, small part of the fungal growth was taken from the surface of the insect body using a sterilized needle and transferred onto the surface of PDA medium in Petri dish. The dishes were labeled, sealed with parafilm and incubated at 25 ±2°C. The dishes were checked for fungal growth after 3 and 7 days. The emerged fungi were picked-up and transferred to new PDA medium plates, purified and identified following keys given by Ainsworth (1971), Ellis (1971 and 1976), Barnett and Hunter (1972), Domsch et al. (1993)and Gadd et al. (2006). Frequency of each identified fungus was calculated according to the following equation:

Light microscope examination
To identify the emerged fungi, slides from cultures of any of the previously mentioned fungi grown on the PDA medium for 7 days were prepared, fixed, stained with lacto phenol-cotton blue and examined by light microscope (ModelZeizz AX10) and photographs were captured using AxioCamICc1 using the program (Axiovission4.8.2-06-2010). Stock cultures on PDA under paraffin oil were kept in a refrigerator at 5-10°C and sub-cultured onto fresh medium every 2-3 weeks. These will be the potential biological materials for further research and application.

Separation and identification of the affected insects
The apparently healthy red flour beetle T. castaneum is represented in Figure 1. About 60 insect dead bodies of the T. castaneum checked for the different degrees of degeneration were separated from the stored wheat flour, inspected and photographed. The insects exhibited various morphological deformations as showed in Figures 2, 3, 4 and 5. The most characteristic deformation was the separation of the insect head (Figure 6), decom-position of their wings (Figure 7), legs 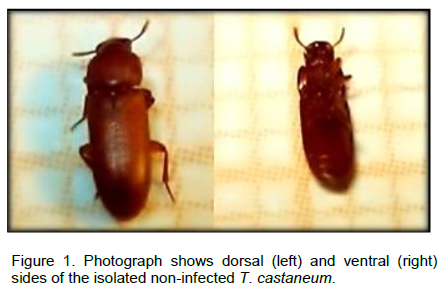 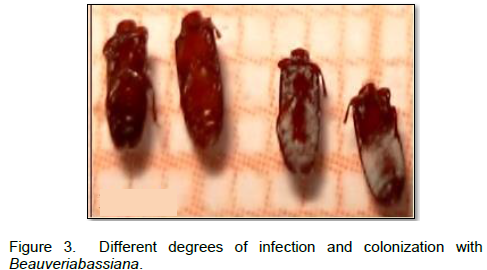 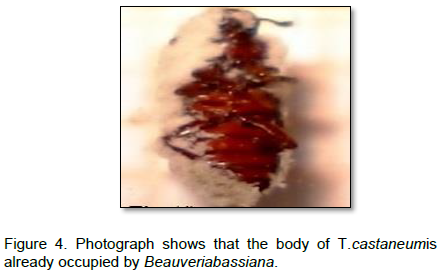 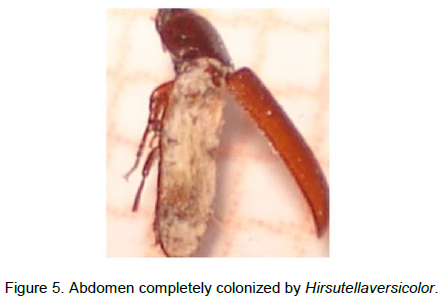 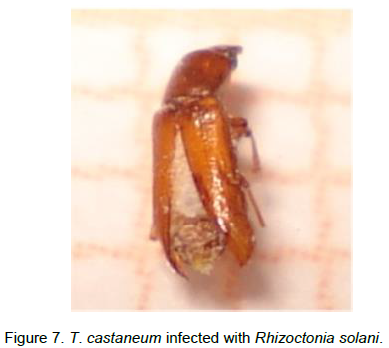 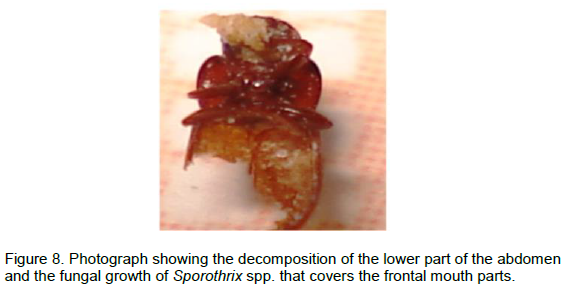 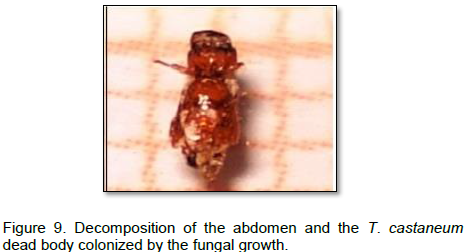 Isolation and identification of the fungi associated with the separated insects
Isolation from the candidate insect samples showed emergence of fungal growths by incubation which resulted in isolation of nine fungal species belonging to eight fungal genera (Table 1). The fungi isolated were purified and identified to the generic and/or the species level according to their morphological characteristics. 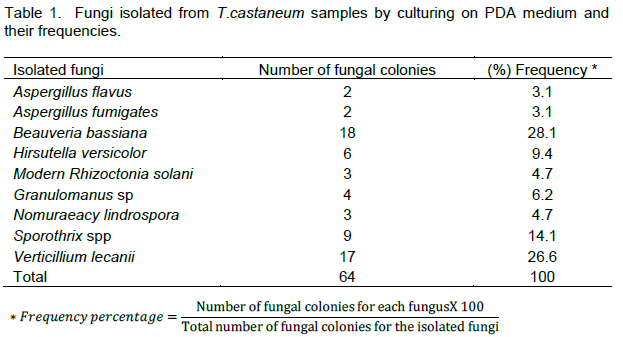 Results indicate that B. bassiana and V. lecanii were the most dominant fungi among those isolated from red flour beetle of wheat flour samples collected from Jazan showing 28.1 and 26.6%, respectively, followed by Sporothrix spp. (14.1%), Hirsutella versicolor (9.4%), Granulomanus sp. (6.2%), modern Rhizoctonia solani and Moelleriella sp. (4.7%), Aspergillus fumigatus and A. flavus (3.1% ).
Light microscopy
The morphological features of the isolated fungi were studied through examination of slides prepared from the fungal colonies obtained on PDA medium. The prepara-tions were stained by lactophenol-cotton blue and examined by light microscope at magnification 40x. The photographs are represented in Figure 10. 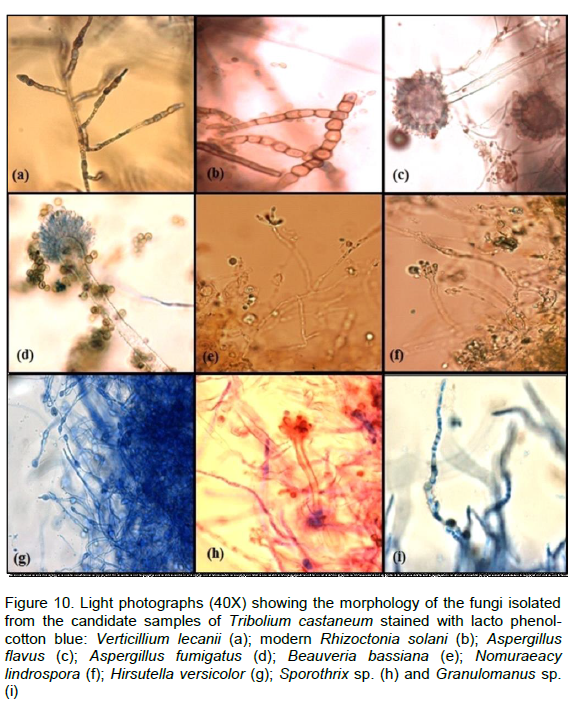 Several studies confirmed the development and survival of T. castaneum in wheat flour (Khattak and Shafique, 1986; Shafique et al., 2006; Bosly and Kawanna, 2014). Infestation by insects encourages growth of fungi including those that produce mycotoxins, and results in contamination of commodities with insect bodies and waste products etc. The diversity and distribution of entomopathogenic fungal species depends on environmental conditions, diversity of insect species and their hosts. Dispersal of the fungus probably played an important role in the co-evolution with its insect host and the co-evolution of the insect with its plant host (Chaverri et al., 2005). The high moisture and diversified and plentiful insects in tropical countries, especially those like our country (KSA) provide ideal conditions for the entomopathogenic fungi to develop as stated in Gadd et al. (2006). Previously, Shah and Pell (2003) indicated that the dead insect's body infected with an entomopathogenic fungi may be firm and "cheese-like" or an empty shell, often but not always with cream, green, red, or brown fungal growth, either enveloping the body or emerging from joints and body segments. Incubation of the candidate insects for 7 days at 25±2°C resulted in emergence of fungal growths on the surface of some incubated insects dead bodies. On the other hand, the rest of the incubated insects still clean even after prolonged incubation period to 14 days. Gabartya et al. (2014) described that B. bassiana and M. anisopliae are entomopathogenic and their infection begins when conidia (asexual spores, the seeds of a fungus) attach to insect's cuticle, the spores germinate and penetrate the insect's skin and enter the host. Once the fungus penetrates the host it produces toxins that overcome the insect immune system and the hyphae penetrate through the cuticle to the outside and cause white (B. bassiana) or green (M. anisopliae) sporulation on the insect's body. The obtained results about those fungi indicate that invading insects occurred by penetrating their cuticle or "skin." Once inside the insect, the fungus rapidly multiplies throughout the body. Death is caused by tissue destruction and, occasionally, by toxins produced by the fungus. The fungus frequently emerges from the insect's body to produce spores that, when spread by contact with other insects, can spread infection (Moino et al., 2002). Another explanation is the fungi secondary metabolites that increase the chance of insect death (Fan et al., 2013). The previously mentioned fungi have the ability to decompose cuticle layer to be able to penetrate the insect body and colonize it leading to death of these insects. The fungi act through the insect integument in several ways. Long chain hydrocarbons help in or play an important role in initial attachment of the entomopa-thogenic fungal spores to cuticle given that such dry phialocondia attach in nonspecific manner through hydrophobic interaction (Lord, 2001 and 2009; Shah and Pell, 2003). The chemical, biological or physical treatments for controlling the insects during storage may contribute towards reducing spread of fungal spores within the storage system (Huang et al., 1997; Athanassiou et al., 2008; Brijwani et al., 2010; Mohale et al., 2010; Beckett, 2011; Villers, 2014).

The natural death of the insects separated from the stored wheat flour gave us the idea of this investigation and the further studies of biological control of the red wheat flour T. castaneum. The fungi were isolated from insects naturally exhibiting different degrees of deforma-tion, decomposition and superficial fungal growth. The more destructive fungal genera that is B. bassiana, H. versicolor, Sporothrix sp. and V. lecanii preserved for further study which will concern biological control of T. castaneum
It can be also be concluded that, storage of wheat flour under Jazan conditions which is characterized by high temperature and humidity resulted in the presence of T. castaneum. Moreover abnormal deformation, decompose-tion and or superficial fungal growths flour should be stored in conditions to prevent the flour from attracting insects and fungi to avoid the loss of flour and the health damage resulting from the usage.

The authors declared no conflict of interest.

The authors would like to thank the Fungi Research Department, Plant Pathology Institute, Agriculture Research Center (ARC), Giza, Egypt for the identification of the isolated fungi.