The red flour beetle (Tribolium castaneum) is one of the main pests infecting cereals and causes damage to stored grains. Many pests, including beetles, are susceptible to infection by naturally occurring insect-pathogenic fungi (entomopathogenic fungi). In the present study, wheat flour collected from the local markets in the Jazan region of Saudi Arabia and dead bodies of T. castaneum adults were separated. The fungi associated with these insect dead bodies were identified. The result concluded that the most dominant fungi were Beauveria bassiana (61.67%) and Verticillium lecanii (38.33%). Fungi showed different stages of infection, such as adhesion, spore germination and mycelium colonization in the insect cadavers, as illustrated by scanning electron microscopy (SEM). The deformations, mycelium extortion and colonization, decomposition and erosion of the cuticle occurring in the different parts of the insects' cadavers were recorded by SEM. The results showed the presence of entomopathogenic fungi B. bassiana or V. lecanii on T. castaneum, as well as the susceptibility of T. castaneum adults to these fungi.

Tribolium castaneum Herbst 1797 (Coleoptera: Tenebrio dae), is a cosmopolitan and serious pest of cereal grains and their products. This insect is unable to feed on the intact grains but causes considerable loss of flour weight, which is a significant economic problem (Shafique et al., 2006; Ali et al., 2009; Almaši and PoslonÄec, 2014). A positive correlation was observed between the intensity of infestation and damaged proteins and fats of wheat; however, a negative correlation was found with carbohydrates (Wakil et al., 2003). In addition, the correlation between the intensity of infestation and agro climatic conditions such the conditions in Jazan region in Saudi Arabia has also been previously mentioned (Bosly and Kawanna, 2014).Entomo pathogenic fungi are considered to be important mortality factors for insects and were identified based on the fungal growth observed on insect cadavers. They have also been proposed as biological control agents of insects (Vega et al., 2009; Wakil et al., 2014; Lacey et al., 2015). The fungal growth depends on the climatic conditions that favor insect infestation (Rezazadeh et al.,  2013). A study in Babylon province on wheat flour samples revealed the presence of Aspergillus, Penicillium, Fusarium, Cladosporium, Alternaria, Mucor, Rhizoctonia, Trichoderma, Rhizopus, Nigrospora, Bipolaris, Macrophomina, in the decreasing order of frequency. The study revealed a positive correlation between moisture content and molds (Al-Defiery and Merjan, 2015). A previous study on wheat flour samples from Jazan region market found live adult, larvae, cast skin of T. castaneum and isolated four Aspergillus species from the stored wheat flour and from the different live insect stages; the isolated species prevalence being A. flavus, A. niveus, A. terreus and A. niger (Bosly and  Kawanna, 2014). Also, (Wakil et al., 2014) isolated from the T. castaneum cadavers were Aspergillus sp., Fusarium sp., Alternaria sp., Rhizopus sp., Penicillum sp. and Mucor sp. Few studies have investigated the modes of infection and the histopathology of fungi in selected insects of economic importance (Toledo et al., 2010; Wakil et al., 2014). Scanning electron microscopy (SEM) can provide information about the insect's surface topography. Therefore, the external development of the visualized fungi associated with their insect hosts. The present study was aimed to investigate the surface topography of the T. castaneum dead bodies and their fungi adherence and germination, which were isolated from the wheat flour samples collected from Jazan region markets, with the help of scanning electron microscopy (SEM) technique.

Collection of T. castaneum
The dead adults of the T. castaneum were isolated and identified as
described in a previous study (Bosly and Kawanna, 2014) from stored flour collected from Jazan markets by using a fine silk sieve and cleaned with the help of camel hairbrush to remove the flour. The insects' dead bodies (120 insect adults) were inspected by the binuclear for deformation, decomposition and / or fungal growths. The individuals who exhibited deformation, abnormal decomposition and/or superficial fungal growths were used in our study for fungal identification and SEM examination.
Identification of fungal growth
The most abundant fungi that showed fungal growths were collected dead adult insects T. castaneum and identified according to the method previously described (Bosly and Kawanna, 2014).
Scanning electron microscopy (SEM)
Ten insect samples exhibiting different degrees of deformation and obvious surface fungal growth were chosen. The candidate insects were fixed by immersion in 4% glutaraldehyde (GA) with a 0.2 M pH 7.2 sodium-cacodylate (CAC) buffer for 6 h. Specimens were then fixed in 1% osmium tetroxide (OsO4) in a 0.1 M pH 7.2 sodium-cacodylate (Na(CH3)2As02*3H20) buffer for one hour. Fixation and dehydration were performed in plastic Eppendorf tubes. After fixation, specimens were dehydrated in 30, 50, 70, 90 and 100% acetone series. The insects were finally washed three times in a 100% acetone solution. The critical point drying using CO2 followed and the last stage of preparation was the gold-palladium coating for 120 s (Güerriâ€Agulló et al., 2010). The examination and photography were performed through a Joel Scanning Electron Microscope (JSM-T 330 A) equipped with image recording and processing system (Sem Afore).

Results showed the percentage of spreading of the fungi over the Tribolium castaneum cadaver surface was 61.67% with B. bassiana and 38.33% with V. lecanii (Table 1). Micrographs of SEM (Figures 1 and 2) revealed spreading of the fungi over the cadaver surface in a manner of adherence of the fungal conidia to the insect cuticle followed by germination and penetration through the cuticle. Entomopathogenic fungi, like most fungal pathogens of plants and vertebrates, infect insects through the external cuticle. Fungi spread throughout the insect obtaining nutrients, leading to the death of the host by physiological starvation 3 to 7 days after infection. Fungi species initially produce rounded protoplasts to avoid detection by insect hemocytes and fungi circulate within the insect hemolymph and produce toxin. Hyphomycete of fungi circulate within the insect hemolymph and the toxin production is carried out by blastospores. After the death of the insect host, the fungus appears from the dead host, and sporulation occurs on the outside of the cadaver (Samson et al., 2013). The main events in the initial stages of fungal infection begin with the attachment of conidia to the insect cuticle and expression of a variety of hydrolytic enzymes such as proteases, chitinases, and lipases, and other factors, promote germination and growth of the fungus across the surface of the host, and subsequent hyphae penetration of cuticular layers. This is because, during the lipolytic activity, free fatty acids are released, thus contributing to host adhesion. Lipids are primarily the first barriers in epicuticle acting against pathogenic microbes, thus reinforcing the importance of these enzymes in penetration and, hence, infection (Wakefield, 2006; Xiao et al., 2012; Zheng et al., 2012; Wakil et al., 2014; Gao et al.,  2015). This is because the insect cuticle’s outermost layer (epicuticle) is a hydrophobic barrier rich in lipids that is followed by the procuticle containing chitin and sclerotized protein, which is divided into the exo-, meso-, and endo-cuticular layers. The procuticle, followed by the epidermis, surrounds the internal structures of the insect. Hence, the climatic suitability from temperature and moisture, as previously mentioned, is required for the fungal growth as the fungus generates heat and moisture as it grows (Fandohan et al., 2003). The authors of the previous study (Bosly and  El-Banna, 2015) isolated nine fungal species belonging to eight fungal genera from the surface of dead bodies of T. castaneum separated from stored wheat flour collected from Jazan markets. The results indicated that B. bassiana and V. lecanii were the most dominant fungi among those isolated from T. castaneum cadavers followed by Sporothrix spp., Hirsutella versicolor, Granulomanus sp., Modern Rhizoctonia solani and Moelleriella sp., Aspergillus fumigatus and A. flavus. That showed decomposition, deformation and superficial fungal growth. Beauveria bassiana was recorded to be the most dominant fungi among those isolated from the dead red flour beetles of wheat flour samples collected from Jazan  (18 out of 62, that is, 28.1%) (Bosly and  El-Banna, 2015). Figure 2 showed decomposition and deformation of a large portion of the head and thorax of the insect, and these parts were covered with masses of mycelium and spores of B. bassiana. Figure 3 showed severe infection of the insect's broken leg covered with heavy masses of the branched fungi forming a net covering the infected spacemen. B. bassiana is a popular registered mycoinsecticide that has a target list of 700 host insect species. It is ubiquitous in distribution and is pathogenic to a wide spectrum of arthropods. Its host range spans most orders of class Insecta (Schapovaloff et al.,  2014). The present study is in line with a previous study (Hussein et al., 2013) as the treatment with B. bassiana isolation (second concentrations 35×109) spore/ml) developed higher rates of loss in adults of T. castaneum insect by 41.5%.  A previous study (Wraight and Ramos, 2002) found that B. bassiana affected a wide variety of insect groups (beetles, caterpillars, trips, aphids, etc.). Another study recorded the highest concentrations (1×108 conidia/ml) of B. bassiana suspension in laboratory conditions causing 100% mortality after 9 days (Zamani et al., 2013). Beauveria bassiana was ranked at the top of entomopathogenic fungi widely distributed in the T. Castaneum cadavers and the highest recorded percentage mortality at 7-days post inoculation of the recovered B. bassiana isolates from insect cadavers quantified against larvae of T. castaneum (Wakil et al., 2014). B. bassiana is produced as a commercial product causing high mortality of adults T. castaneum (Khashaveh et al., 2010). 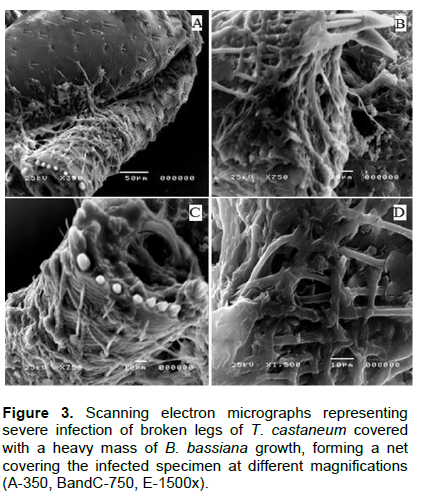 Scanning electron micrographs represented in Figures 4 and 5 shows T. castaneum infection with V. lecanii in the form of adhesion and colonization on the legs with remarkable haloes around the spores and cleavage of the cuticle as well as hyphae penetration of the inner lining of the insect’s mouth and complex eye. In Figure 6, V. lecanii colonization in the abdomen and the insect’s body appear as a mass of mycelium with a few spores with cleavage of the cuticle and the presence of the fungal growth inside the body.  The strain of V. lecanii was screened in a study (Hasan et al., 2013) and proved to be an efficient producer of protein and polysaccharide degrading enzymes (amylase, protease, and lipase). It was found to be an outstanding source of enzyme secretion and can be rationally utilized towards the production of improved mycopesticides. Humidity and temperature are the most important climatic factors that influence the growth of V. lecanii (Schuler, 1991). The fungus was first observed in Ceylon (Sri Lanka) in 1861 on diseased Lecanium coffeae. It was subsequently found by Zimmermann on Lecanium viride on coffee plants in Java (Indonesia) and briefly described by him under the name Cephalosporium lecanii in a short paper in 1898 (Petch, 1925). The fungus V. lecanii infects invertebrate hosts through the external cuticle in three phases as entomopathogenic fungi - adhesion, germination of the fungal spores on the host cuticle, penetration of the insect integument by a germ tube, and development of the fungus inside the insect body, resulting in the death of the infected host. Under optimum humidity conditions, the dead host is covered by the fungal spores and hyphae, as shown in Figures 2 and 3 (ALAVO, 2015). Currently, formulations of L. lecanii are commercialized under the name of MycotalÒ VertalecÒ by the Dutch-based company, Koppert BV (Deacon, 2006). The results from a previous study to control the rust red beetle (T. castaneum) confirmed that treatment with the commercial Mycotal from the fungus L. muscarium in the concentration of 1×107 spore/ml showed higher rates of loss in adult insects by 38.5% (Hussein et al., 2013). The previously published work of the author isolated 17 isolates of V. lecanii out of a total of 62 (26.6%) and recorded as the second most dominant fungi among those isolated from red flour beetle of wheat flour samples collected from Jazan (Bosly and El-Banna, 2015). 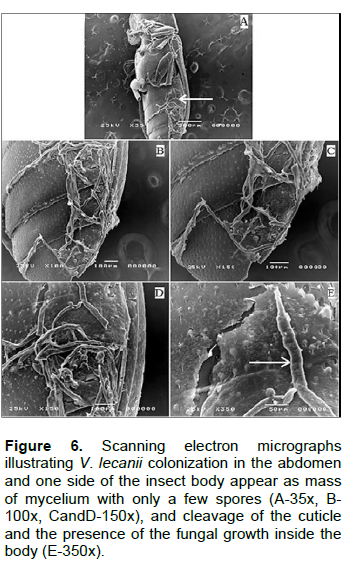 Insects and fungi interact in various ways. The deformations, mycelium extortion and colonization, decomposition and erosion of the cuticle occurring in different parts of the insects' cadavers were recorded by scanning electron microscopy. The study showed the presence of B. bassiana and V. lecanii on T. castaneum, their susceptibility to fungal infections.