Root-knot nematodes cause substantial economic yield loss in tobacco production and many other crops in the world. Their control has been achieved for decades by use of chemical nematicides. However, concern for the environment has led to the banning and phasing out of some effective chemical nematicides. The use of crop rotation is one of the environmentally friendly and sustainable management strategies for managing root-knot nematodes, insect pests and pathogens. The strategy is widely used by resource poor farmers in developing countries. In this study, greenhouse experiments were conducted with the objective of evaluating four leguminous crops (groundnut, sunhemp, common bean and cowpea cultivars) for their efficacy in the management of the root-knot nematode (Meloidogyne javanica). Experimental plants were grown in 15 cm diameter pots and artificially inoculated with nematode eggs. Four different initial inoculums levels of 0, 500, 1,000 and 1,500 nematodes eggs per plant were used. After inoculation the plants were maintained in the greenhouse for 54 days. Thereafter, the nematode reproductive factor and the number of eggs were evaluated. Significant differences (P<0.05) in nematode population built up were observed in plots with the different legumes. Generally, all the groundnut cultivars were effective in reducing populations while common bean was a susceptible host and supported high nematode populations. The results from this study demonstrate that some leguminous crops affect this pest’s capacity to develop within their roots. The test legumes may contain compounds that either kill or deter root-knot nematode reproduction.

The agricultural industry in Africa is at stake because of root-knot nematode (Meloidogyne Goeldi). This is worsened by the fact that farmers have limited knowledge on Meloigogyne spp. in their fields (Kagoda et al., 2010;Onkendi and Moleleki, 2013). These parasites damage crops throughout the world (Jones et al., 2013) but are particularly important in the sub tropics and tropics where environmental conditions and cropping practices favour their reproduction and development (Luc et al., 2005). In Zimbabwe, Meloidogyne spp. are a threat to tobacco growers and particularly the small scale tobacco growers where crop losses can be as high as 80% in areas with high root-knot nematodes (RKN) load and where susceptible cultivars are grown (Tobacco Research Board Annual Report, 1993). Infection of susceptible crop plants produces severe disease symptoms such as stunted growth, wilting, and susceptibility to other plant-pathogens. For many years, RKN were kept below damage threshold by the heavy use of chemical nematicides (fumigants, carbamates and organophosphates) (Karavina and Mandumu, 2012).
Despite these nematicides being extremely effective, they are costly especially to the smallholder farmers and they are not eco-friendly as they pose a serious threat to the ecological balance (Sharma and Sharma, 2017). Consequently, most of the effective chemical nematicides have been banned or their use is being heavily restricted on tobacco (Zesada et al., 2010). Thus, more emphasis is being placed on the use of greener and eco-friendly alternative strategies (Eapen et al., 2009). The use of non-host crops in rotations with susceptible crops is one of the potential alternatives to the use of synthetic nematicides and fumigants as it suppresses RKN populations (Schmitt, 1991). The feasibility of using crop rotations in management strategy has been widely explored in tobacco production (Fortnum and Currin, 1993; Hiranslalee et al., 1995).
In Zimbabwe, for the effective control of nematodes in addition to nematicides, a four year Katambora grass ley has generally been recommended. Both these options were best suited and widely used by large scale commercial tobacco growers. However, post the land reform exercise, there was a large shift from large scale commercial to small scale tobacco production. Because of the shift in the grower spectrum, there arose a need to develop nematode management strategies that enable these resource poor growers to maximize yield. Inclusion of crops from the family Leguminosae in rotations has been reported to have plant-parasitic nematodes suppressive effect (Miamoto et al., 2016). The objective of this study was to screen the most commonly grown legume crops namely beans, groundnuts and cowpeas for their M. javanica host status and to recommend the least susceptible for inclusion in tobacco rations.

Study site
The study site was Tobacco Research Board (Kutsaga Research Station) located 15 km East of Harare at latitude 17°55´S and longitude 31°08´E with an altitude of 1479 m above sea level. The average temperature is 32°C and 18°C in summer and winter, respectively, with annual rainfall between 800 to 1000 mm (FAO, 2006). The soil at Kutsaga Research Station is generally light textured sandy loam.
Legumes germplasm
The germplasm included in this study was obtained from the Crop Breeding Institute (CBI) of the Department of Research and Specialist Services in Harare, Zimbabwe. The selected germplasm were common bean (Phaseolus vulgaris L.) varieties NUA 45, sweet violet, Gloria and Cherry; Cowpea (Vigna unguiculata) varieties CBC1, CBC2 and CBC3; groundnut (Arachis hypogea) varieties Ilanda, Falcon and Tern; Peas (Pisum sativum) variety Snowwind and Sunhemp (Crotolaria juncea).
Root-knot nematode (Meloidogyne javanica) culture and inoculum preparation
The M. javanica was cultured and maintained on tomato (Lycopersicon esculentum Mill) cv. Rodade (highly susceptible to RKN) in the greenhouse. For controlled inoculation tests, RKN eggs were extracted from the infected tomato roots by shaking for 3 min in 0.05% sodium hypochlorite (NaOCl) solution and rinsing for 2 min under running tap water (Stanton and O’Donnel, 1994). The extracted eggs were kept at 4°C before use.
Different inoculum level of Meloidogyne javanica on five leguminous crops
Seeds of the twelve different legume varieties were sown into 5,200 cm3 sterile sandy loam soil (72.8% sand, 8.8% silt and 18.4% clay) in plastic pots at the rate of one seed per pot. One day after sowing, M. javanica eggs with four densities (Pi = 0, 500, 1000, 1500) were inoculated through deep pencil size holes 5 cm from the seed. The pots were laid on the greenhouse benches and the plants were maintained at 25°C during the day for 54 days. On day 55th, plants were uprooted, cut at the base, roots were washed and stained with phloxine B before the egg masses and eggs were counted. The extraction of eggs was the same as was done to inoculum preparation.
Statistical analysis
In this study, the pots were arranged in three complete randomized blocks. The egg mass counts, egg counts and reproductive factor data was subjected to analysis of variance (ANOVA) using GenStat 17th edition (2014, VSN International) and treatment means were separated using the least significance difference (LSD) at P<0.05.

Effect of different inoculum level of M. javanica on leguminous plants
A significant decline in nematode reproductive factor was observed as the initial nematode inoculum increased for all the five different legumes evaluated (Table 1). The reduction of nematode reproduction rate with increasing initial nematode inoculum density has been reported in several crops by early authors (Di Vito et al., 1986, 2004; Vovlas et al., 2008; Sharma and Sharma, 2015). These results are also in agreement with the finding of Osei et al. (2010) who demonstrated that an increase in initial population resulted in reduced reproductive factor in the leguminous cover crops (Velvet bean [Mucuna pruriens], Crotalaria [Crotalaria spectabilis] and Lablab bean [Dolichos lablab]). This observation was in agreement with those reported by early investigators (Lamondia and Brodie, 1986; Rioval and Sarr, 1987; Ibrahim et al., 1999). 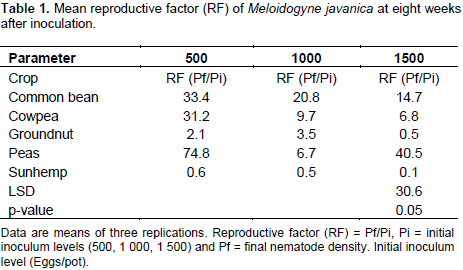 The decrease in the reproductive factor with an increase in the inoculums density could be attributed to increased competition for feeding sites among the nematodes and the greater damage of infected roots with increasing initial population (Al-Abed et al., 2013). According to Lamondia and Brodie (1986) these scenarios lead to the reduction of suitable roots for nematode invasion, establishment and reproduction. In future studies, of a similar nature it is highly recommended to use 500 eggs or juveniles per plant as initial population because this level of inoculum clearly distinguished the host status of the leguminous crops used in the study. Similar observation was done by Sharma and Sharma (2015) on tomato cv. PT-3.
Host status of legume test plants
There were significant differences (p<0.05) among the different legume cultivars in their susceptibility to M. javanica. The reproductive factor on the test crops in response to RKN infection was characterised following Taylor (1967) scale (0 = immune, 1 to 10 = very resistant, 11 to 25 = moderately resistant, 25 to 50 = slightly resistant (susceptible) and as reviewed by Sasser et al. (1984). Highest numbers of RKN eggs were recovered from the four common bean cultivars (NUA 45, Sweet violet, Gloria and Cherry) when the initial population was 500 eggs (Table 2). Thus, all the common bean accessions and Peas var. Snowwind (negative control) were found to be susceptible (Table 2). This observation supports the work done by Osei et al. (2010). They suggested that, the susceptibility of common bean to RKN is due to the production of root exudates that significantly enhanced hatching of RKN.  The reaction of cowpea accessions varied from moderate susceptibility (CBC3) to high susceptibility (CBC2 and CBC1) at an initial inoculum level of 500 eggs (Table 2). However, the groundnut cultivars Ilanda, Tern and Falcon and sunhemp recorded resistance to M. javanica (Table 2). 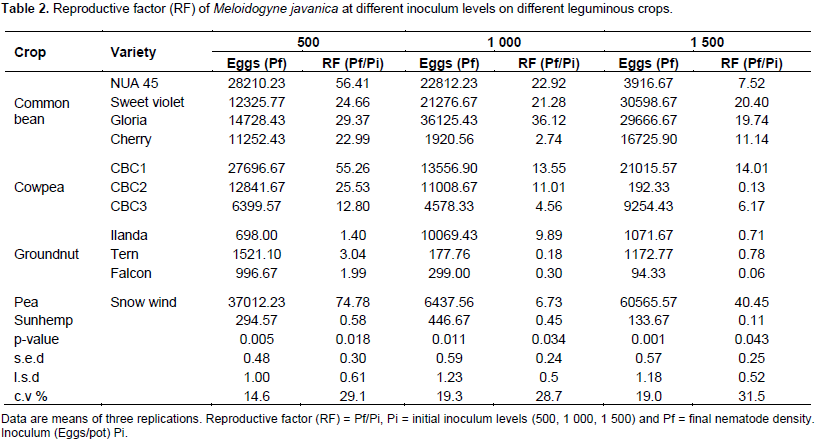 The reaction of groundnut accessions to M. javanica was not unexpected, as groundnut resistance to M. javanica has been reported by several workers researchers (Minton and Baujard, 1990; Stirling et al., 2005). However the M. javanica and M. incognita resistance mechanism by groundnut was not well explained. According to Dhandaydham et al. (2008) resistance to RKN in crop plants varies and may manifest either pre- or post-infection. Pre-infection resistance is attributed to lack of nematode entry into the plant and is possibly due to the presence of pre-formed chemicals in the plant that are toxic or antagonistic to the nematodes. Huang (1985) revealed the mechanisms of M. arenaria resistance in the groundnut variety COAN, Bendezu and Starr (2003) observed the reduction of nematode root penetration relative to the susceptible Florunner variety. They also observed that most of nematode failed to establish a feeding site in the resistant variety and emigrated from the roots. It is also possible that nematodes in this study were repelled by exudates as was observed in Brassica nappus (Potter et al., 1999) and soybean (Ibrahim and Lewis, 1986).where nematotoxic exudates were likely produced The legume that suppressed RKN reproduction could have done so indirectly by promoting the development of rhizospheremicroflora, antagonistic to plant parasitic nematodes.
From the present study, groundnut has emerged as the rotation crop of choice for M. javanica management. In Zimbabwe groundnuts are widely grown by resource poor communal farmers and some 600 metric tonnes valued at US$1,022 million groundnuts are delivered to the commodities market annually (The Sunday Mail, Zimbabwe 21 December, 2014). Coincidentally, it is predominantly these resource poor small scale growers who produce 80% of the tobacco crop in Zimbabwe. Given that a groundnut crop is already acceptable to them, growers are likely to easily adopt it as a rotation crop. These growers will not only benefit from nematode suppression but also from its nitrogen fixing attributes which may further result in reduced fertilizer requirements and the cost of tobacco production. However, in future, on farm trials should be conducted in this aspect before this crop is being recommended for use by growers as one of the component in crop rotation.

We thank the Nematology staff for technical assistance, and S. Banana B Mawire and F. Zinyandu for the statistical analysis of data.