The plankton of Odot Stream, Niger Delta, Nigeria were investigated between June and August, (wet season) and October - December, 2014 (dry season) using standard analytical procedures.  The data generated were subjected to descriptive statistics and community structure analysis. A total of 37 species of Phytoplankton belonging to four taxa were identified in ascending order as follows: Xanthophyceae (4.7%), Baccillariophyceae (20.19%), Cyanophyceae (36.34%) and Chlorophyceae (38.71%). Zooplankton belonging to 4 taxa were also identified in ascending order as follows; Cladocera (11%), Copepoda (11%), Larvae (26%), Rotifera (52%). Higher seasonal abundance among the families were recorded in dry season for Chlorophyceae (39.16±14.75), Cyanophyceae (21.83±6.50) and Xanthophyceae (10.66±5.81) while higher wet seasonal abundance were recorded for Baccillariophyceae (22.25±4.59) and Copepoda (0.58± 0.34). Chlorophyceae and Rotifera were found as the dominant group in this present study and indicated that Odot stream was highly productive (eutrophic), which could be attributed to high temperature due to the shallowness of the stream and its high exposure to sunlight. Excessive algal bloom should, therefore, be checked to prevent the stream from anoxia and poor water quality and shift in species composition and fish kill.
Key words: Odot Stream, phytoplankton, zooplankton, abundance, Bacillariophyceae, Rotifera

Streams and rivers are very important ecosystems for socio-economic development and sustainability of the environment providing a variety of valuable functions to the environment, national economics and the com-munities that depend on them (Mbuligwe and Kaseva, 2005; Yillia, 2008). The presence of an aquatic flora or fauna species in an aquatic habitat readily reflects the characteristics of the environment which they exist, showing that one or more ecological variable is within its tolerance range (Dokulil, 2003). The study of plankton (phytoplankton and zooplankton) is very important because they serve as basis upon which the aquatic ecosystem is supported. The plankton community is a dynamic system that responds quickly to environmental changes; hence they act as indicators of water quality (Wetzel, 2001). Due to several favourable features such as small size, short generation time and a relatively homogenous habitat, plankton organisms are ideal for theoretical and experimental population ecology (Esenowo and Ugwumba, 2010). Several studies have been carried out on various aspects of the aquatic  ecosystem in the Niger Delta (Ekpo, 2013; Akpan, 1991; Abowei and George, 2009; Abowei, 2010; Etim et al., 2013; Okiemute and Maduka, 2011). However, no work has been carried out on streams with close proximity to Ibom International Airport one of which is Odot Stream. This study was, therefore, aimed at investigating the plankton composition of Odot Stream as to contribute to the existing knowledge on plankton ecology and distribution and to form S line data for future research.

Description of study area
Odot stream is located in NsitAtai Local Government Area of Akwa Ibom State, Nigeria. The local government has an area of about 17,000 square metres. It is approximately 50 km from Uyo, the capital of Akwa Ibom State. It is bound in the north by Uruan, in the east by Okobo, in the west by Ibesikpo Asutan and in the south by Uyo L.G.A. with coordinates 4°51’O” N and 8°010 ‘O” E (Figure 1). 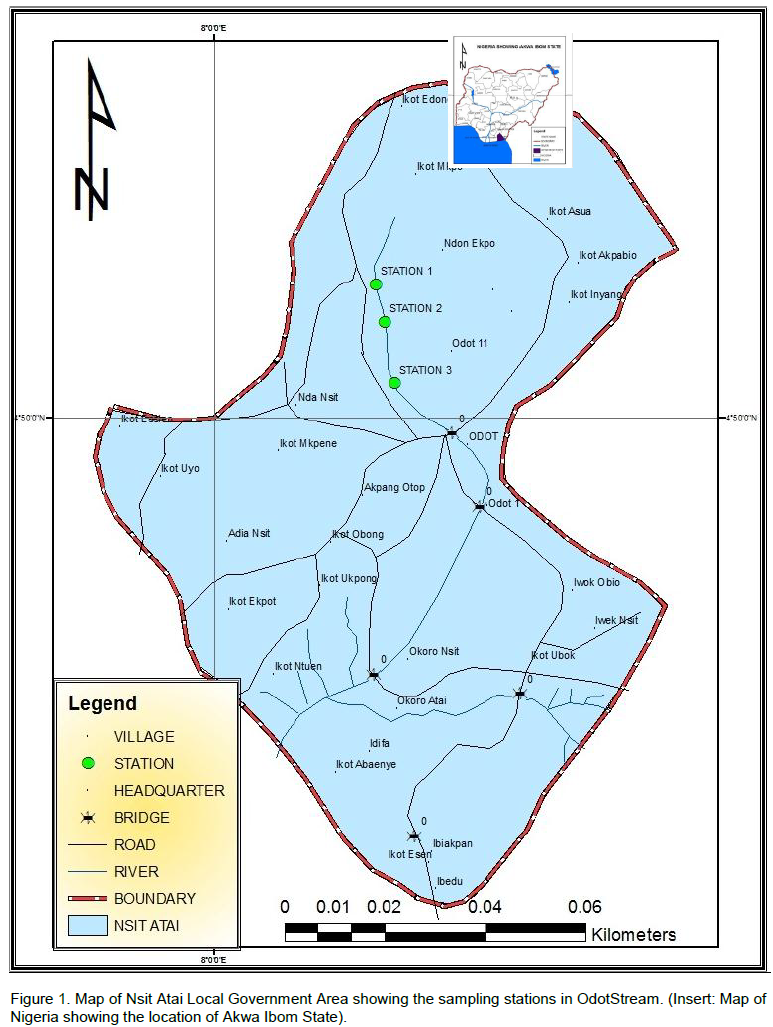 The bottom of the stream is predominantly sandy and muddy while the edges are without mud. The topography of the catchments is sloppy, making water current to be moderately fast from the upstream to the downstream. Activities in the stream include sand dredging, washing of clothes, bathing, and agricultural activities around the stream banks. The climate of the area is typically of tropical rainforests, comprising the dry season (November -March) and wet season (April - October). The dry season is characterized by a prevalence of dry tropical continental winds from the Sahara desert and the wet season by moist tropical maritime winds from the Atlantic Ocean (Ekpo, 2013).
Selection of sampling sites
Water samples were collected from three sampling stations: IkotNyoho Edo - Station 1 (Upstream), IkotMbre- Station 2 (Midstream) and IkotMboho (Downstream) all in Odot, NsitAtai L.G.A. The streams were selected on the basis of the fact that despite its social, economic and ecological role, no published work is available on it.
Sample collection, preservation, identification and analysis
Sampling was done monthly from the three established sites from June-August and October-December, 2014. Since physico-chemical and biological features of a lotic ecosystem could vary with time, sampling was done at regular and specific time intervals in the midmorning hours between the hours of 8 am and 12 noon.
Water samples were collected using plankton net with mesh size of 55 mm. The plankton net was horizontally towed for about 3 mins just below the water surface. The samples collected were fixed with approximately 5 ml of 4% formaldehyde solutions in the field immediately after collection and taken to Fisheries Laboratory, University of Uyo for analysis. The preserved samples were allowed to settle first in the sampling bottle, then about two-third of the water sample was decanted into a beaker to concentrate the plankton specimen. 1 ml of the water sample was placed in a Petri-dish and mounted under the microscope for viewing (Egborge, 1973) and appropriate keys (Needham and Needham, 1962; Jeje and Fernando, 1986, 1991; APHA/AWWA/WEF, 2005 and Nwankwo, 2004) were used for identification of the plankton. The total number of species was recorded as number of cells per ml for phyto-plankton; while zooplankton were recorded as number per ml.
Community structure analysis
Three indices were analysed for community structure and include species diversity (Shannon and Weinner, 1949); species equitability or evenness (Pielou 1966) and species richness Margalef (1951). 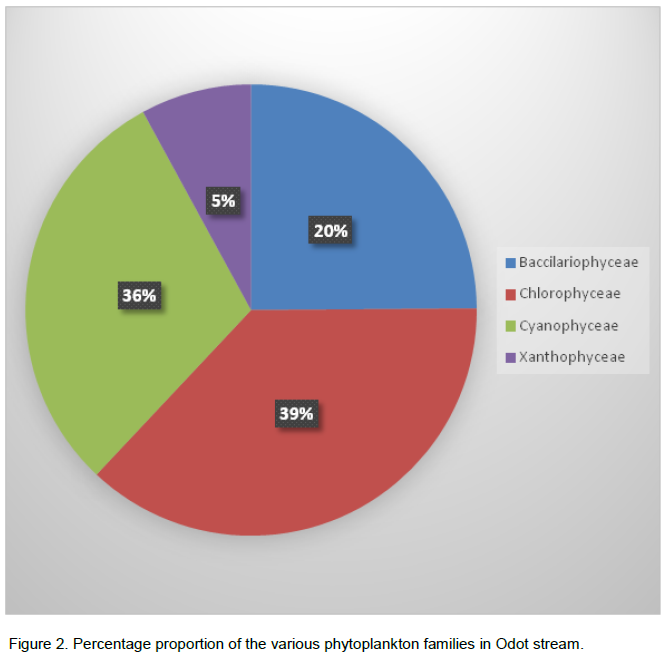 The green algal (Chlorophyceae) were the most important group in terms of diversity with the centric forms recording a high abundance. Genicularia sp. dominated with a percentage abundance of 16.38% in the group level and in total number of plankton organism, while the least contributors in terms of number were Gomphonema sphaeropharum, Closterium acerosum, Cosmarium quadrum, Pediastrum duplex and Spirulina sp., accounting for 0.07% respectively. Tribonema viridae was the only species encountered belonging to Xanthophyceae.
In terms of zooplankton, four taxa were identified (Table 2). Rotifera was the most abundant contributing 52% of the composition followed by larvae which contributed 26%, while Cladocera and Copepoda were the least contributing (11% each) (Figure 3). 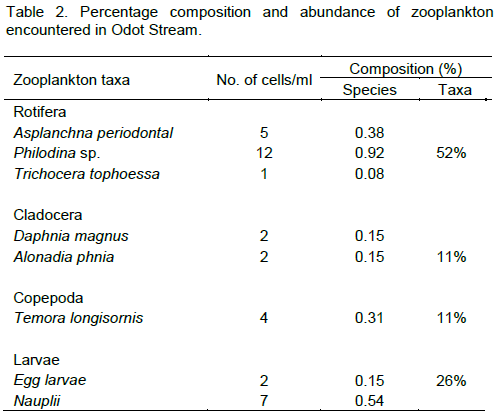 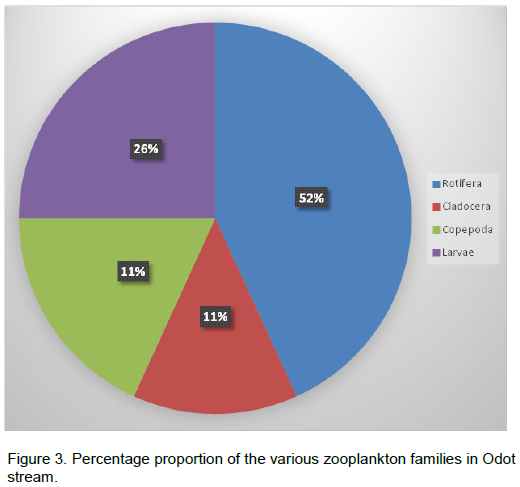 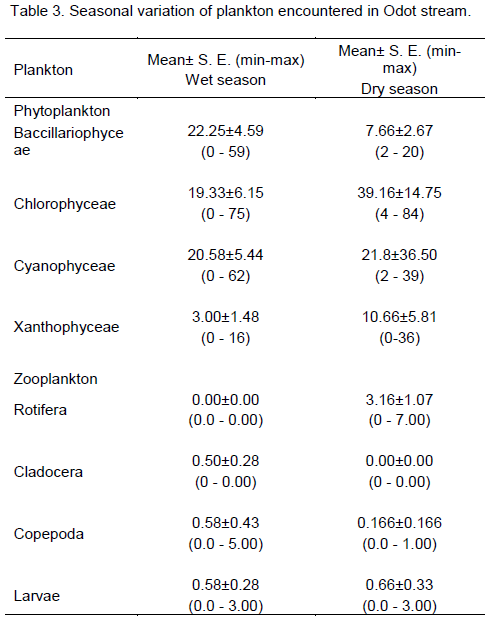 Phytoplankton composition of Odot Stream
The abundance of Chlorophyceae (green algae) in this present study corresponds with the report of Kemdirim (1990) and Subhashree and Patra, (2013). It shows contrast with those of Essien-Ibok et al. (2010), Onyema (2010) and Esenowo and Ugwumba (2010) which reported Bacillariophyceae as highest. Among the chlorophyceae, Genicularia sp. was the most abundant species contributing 16.38% of the total plankton species. This was evidenced most in dry season. As observed in the phytoplankton community structure, Dominanice-D index showed high value in December (0.49). Simpson index revealed highest value in December, station 1 and lowest in July, and Station 3. Individual occurrence ranged from 4-12.
Shannon-H index ranged from 1.04 (August Station1) to 2.03 (October, Station 3). Evenness ranged from 0.37 (July, Station 3) to 0.89 (June, Station 3). The abundance of Chlorophyceae is attributed to high water temperature which would cause high photosynthesis and bloom.
Zooplankton
The abundant group among the zooplankton was rotifer. This corresponds with the findings of Ekpo (2013), and Arimoro et al. (2007). The abundance of rotifer in the stream would be attributed to their ability to undergo vertical migration, which minimizes competition through niche exploitation and food utilization. Also, rotifer richness in the stream probably could be attributed to their pathenogenetic reproductive pattern and short development rates under favorable conditions in most fresh water system (Akin-Oriola, 2003). The author further reported that the rotifers have the shortest life cycle with peak reproductive period of 12 days at 20°C and 5 days at 25°C are normally considered as good indicators of good water quality. Vladimir (1983) suggested that high occurrence of rotifers in any water body indicates an aerobic condition. The result of this study suggests that the rotifer philodinids were more tolerant to environmental stress and that makes it the most occurring organism. This also corresponds with the documentation of Ogbeibu (1998) and Ovie (1997).

Plankton has been used as an indicator to observe and understand changes in the ecosystem. The high relative abundance of chlorophyceae and rotifers indicate that Odot stream is highly productive (eutrophic), which could be attributed to high temperature due to the shallowness of the stream and its high exposure to sunlight. Excessive algal bloom should, therefore, be checked to prevent the stream from anoxia and poor water quality and shift in species composition and fish kill.
A holistic approach to the management of this stream would be to integrate fish production into its water quality management programme as this would enable the evaluation of the present and future conditions of the stream and its ability to sustain present and future needs.