The presence of living organisms is a major factor that distinguishes soils from disintegrated rock fragments from which they were derived. The wide variety and vast number  of organisms in soil  interact  with  environmental factor in complex cyclical and evolutionary process that transform fragmented rocks into mature soil. There is a vast literature on the role of organisms in soil processes and  soil   formation  and  in  particular  the  interaction  of microorganisms and invertebrates in decomposition and mineralization processes in becoming letter understood  (Anderson, 1988). In general, soil provides a more stable environment for organisms than condition above the ground and therefore serves as a refuge for many epigeal invertebrates (Wood, 1988). In tropical regions, soil invertebrates macrofauna play a key role in organic matter, recycling (Levelle, 1994). The invertebrate fauna is dominated by termites in terms of density. Termites are terrestrial insects found approximately between 45°N and 45°S. Within these latitudinal limits they are restricted by a combination of extreme aridity and lack of vegetation and are rarely found at altitudes above 3000 m. Within this range, termites can be found in all soil types, except those which are semi- permanently water-logged and severally cracking vertisols (Wood, 1988). The impact of termites is usually due to their building ability where mounds (termitaria) represent spectacular biogenic structures. Termite mound density can be very high covering substantial land area (Levelle, 1994) and limiting available land for cultivation (Maduakor et al; 1995). The mode of mound construction differs among termite species: soil feeding species build their mounds with soil particles glued together with faeces (Wood et al., 1983); while funges – graving species mix soil particles with their saliva (Grasse, 1984). It has been suggested that mound building activity results in the upward transfer of clay, silt, sand and fine grain particles to the surface, a process which is opposite to leaching and this results in significant mobilization and dispersion of trace elements (Roquin et al; 1991; Chatupa and Dieng, 2000). The use of termite mound soil sampling in geochemical exploration has these become an active area of research (D’orey, 1975; Kedebe 2004; Petts et al; 2009). The ecological and geochemical significance of termite mound soils requires their systematic investigation. In this paper, the mineralogical and geochemical compositions and geotechnical properties of termite mound soil in the Ika area Delta State, Nigeria are reported.

Geological setting
The termite mound soil samples were collected from the Ika area, Delta State, Nigeria. The area is located in the Niger Delta Basin, Southern Nigeria within latitudes 5° and 6°30 N and longitude 5°40’ and 6°50’E. The Miocene-Recent Benin Formation (Reyment, 1965) typifies the Niger Delta basin and it is underlain successively in the north eastern (surface) Niger Delta by the paretic Ogwashi- Asaba formation, the Eocene Amiki Formation and the Paleocene Imo Formation. In the southwestern (subsurface) Nigeria, three diachronous units; (from top to bottom), Benin, Agbada and Akata Formations have been identified (Short and Stauble, 1967). The procleltaic marine Akata Formation composes mainly of shales and the poralic Agbada Formation consists mainly of sequences of sandstones shales, while the Benin Formation consists of sandstones and unconsolidated to partially consolidated sands and gravels with clay lenses (Nesbilt and Young, 1989)  Figure 1  shows the geological setting of the study area.
Collection of termite mound soil samples
Termite mound soil samples were collected from nine locations (Abavo, Agbor Ekuku- Agbor, Idumuesah, Igbodo, Otolokpo, Owa, Umunede and Ute-Okpu) in the Ika area of Delta State (Figure 2). At each location, samples were taken from the top, middle and base of each of five mounds and composited. The samples were dried, ground in an agate motar and representative sample were taken for analysis.
Analyses of samples
The mineralogical composition of the termite mound soil samples was determined by x-ray diffraction (XRD) method using the Brauker D8 Advance x-ray diffractometer with a Lynx Eye detector. The scanning covered the 2ϴ intervals of 4- 70° with a scanning angle step of 0.015° and a time step of 1 s. The mineral phases were quantified using a Riveted – based quantification routine with TOPAS® software.
Analysis for geochemical composition of the termite mound soil for samples was carried by x-ray fluorescence using the XRF – 1200 ARL, Advant’s thermoscientific. Trace elements determinations were carried out on acid digestates of the termite mound soil samples using a Shimadzu GFA – 7000A AAS. The geotechnical tests were conducted in accordance with the BSI 1377 methods (1998). The percentage of difference sizes of the termite mound soil particles determined by sieve analysis were plotted as distribution (gradation) curve which allowed the uniformity coefficient Cc and coefficient of curvature, Cu of the test mound soil samples to be determine. Consistency limits were determined by the Atterberg tests and compaction test was used to determine the maximum dry density and optimum moisture content of the termite mound soil samples. Shear strength measured as cohesion and friction angle was determined by triaxial test. 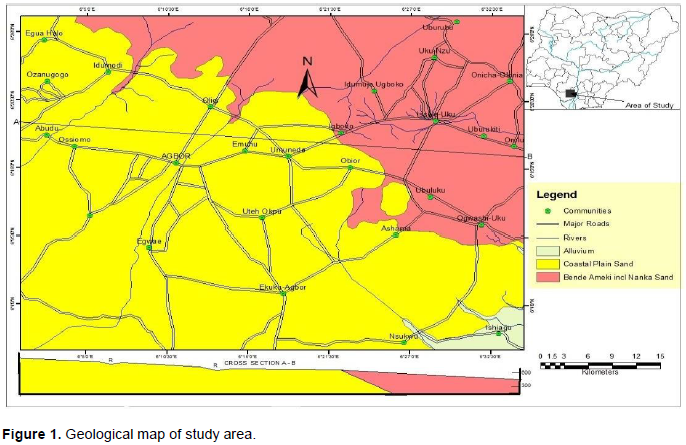