The reproductive and feeding ecology of rodents in Sekoru district, Southwest Ethiopia

A study on reproductive and feeding ecology of rodents was conducted in agricultural areas of some selected kebeles (the smallest administrative unit in Ethiopia) of Sekoru district from February 2014 to December 2014. Rodents were captured by snap trapping using rat traps. During the whole study period, four rodent species, namely, Rattus rattus, Mastomys natalensis, Arvicanthis dembeensis and Lemniscomys barbarus were identified from a total of 326 rodents captured in 1320 trap nights. The proportion of male and female individuals captured was not different from a 1:1 ratio. Scrotal males and perforate females were captured throughout the study period though reproduction was seasonal. Breeding started in the later part of the rainy season and declined at the beginning of the dry season. The average number of embryo counted per pregnant females was 5.57±1.09, 8.65±1.80, 6.38.±1.70 and 4.00 ± 1.41 for R. rattus, M. natalensis, L. barbarus and A. dembeensis, respectively. The food items identified during the stomach content analysis were grouped into leaves, seeds, animal matter and unrecognized food item. There was no variation in the type of food item identified among the four rodent species. Some variations were observed in the proportion of the different food items consumed by the four rodent species in different trapping sessions. Awareness creation and the need of rodent pest control in all growth stage of crops and after harvest were recommended.
Key words: Arvicanthis, breeding, feeding, Lemniscomys, Mastomys, Rattus, Sekoru.

Pest animals cause a considerable yield loss throughout the world. Among the crop pests, vertebrate pests especially rodents are responsible for much of the loss and farmers often list rodents as one of the most significant pests to their crops (Singleton et al., 1999; Makundi et al., 2005; Sudarmaji et al., 2003; Tuan et al., 2003). Rodents are regarded as the number one group of mammals in terms of the problems they create in agriculture, horticulture, forestry and public health (Makundi et al., 1999; Brown et al., 1999).
In East Africa, pest rodents cause considerable loss of agricultural crops. In Tanzania, for example, they cause an estimated pre-harvest loss of 15% in maize per annum (Mulungu et al., 2003). Mwanjabe and Leirs (1997) reported the damage to be more than 80% in certain cropping seasons and locations during rodent outbreaks. Taylor (1968) reported 20% damage to maize plantation, 34-100% loss of young wheat in some fields and 34% loss of barely after outbreak of rodents in western Kenya in 1962. Earlier studies in Ethiopia have indicated crop loss of about 20% per annum (Bekele and Leirs, 1997). Later, Bekele et al. (2003) reported an annual yield loss of 26.4% of maize by pest rodents in experimental fields at Zeway (eastern Showa Zone, central Ethiopia) which was even higher than the earlier reports.
Designing and applying effective pest management strategy such as integrated pest management (IPM) can reduce the amount of yield loss caused by pest rodents. Experiences of rodent pest control practices in different countries and research findings to devise appropriate rodent management strategies have showed that successful management of rodent problems depends upon correct identification of the rodent species causing the problem, and obtaining sufficient information on the biology, ecology and behavior of species in the ecological setting where the problem occurs (Tubin and Fall, 2004). Though such ecological studies are essential to devise control strategies of pest species of a particular region, few of such studies were conducted in agricultural areas of Ethiopia (Bekele et al., 1993; Bekele and Leirs, 1997; Lavrenchenko et al., 1998; Gadisa and Bekele, 2006; Bekele et al., 2003; Gebresilassie et al., 2004, 2005, 2006). In spite of serious problems faced by the farmers and many reports on agricultural damages on crops by rodent pests (personal communication with the head of crop protection clinic of the zone), no serious attempts were made in the Jimma zone of southwest Ethiopia to devise rodent control strategy.

Study area
A study on reproductive and feeding ecology of rodent pests was conducted in some selected kebeles (the smallest administrative units in Ethiopia) of Sekoru district, Jimma Zone, southwest Ethiopia from February 2014 to December 2014 (Figure 1). The altitude of the district ranges from 900 - 2300 m a.s.l. The mean annual temperature of the district is 25°C and the mean annual rain fall is 1500 mm. The wet season is long and ranges from May to October and the dry season ranges from December to April. 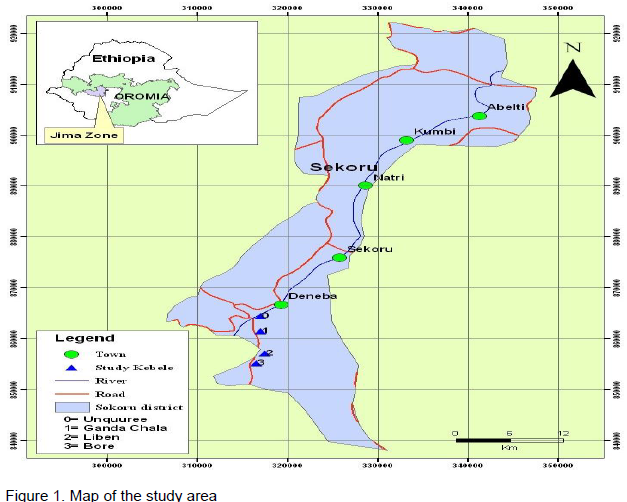 Trapping and identification of rodents
Monthly snap trapping was carried out using rat traps for 11 consecutive months (February, 2014 to December, 2014). A total of 30 rat traps were used each day for four consecutive days every month throughout the study period. Traps were set in lines with 10-15 m trap space (Montgomery, 1985; Sutherland, 1996) and peanut butter was used as bait. To increase the trap success, the traps were set along the edges of cultivated fields or in cultivated fields where possible rodent refugia were available or where there were visible runways as rodents use specific paths (Kingdon, 1974;
Aplin et al., 2003). After collecting the captured animals, they were identified and standard external measurements were taken. Captured rodents were identified following taxonomic charac-teristics described by Aplin et al. (2003), Yalden et al. (1996) and Kingdon (1997).
Reproductive conditions
In males, sexual maturity or immaturity was assessed from the conditions of the testes and the scrotal sacs (Aplin et al., 2003; Bekele and Leirs, 1997; Gebresilassie et al., 2006). Captured rodents were considered juveniles if their testes are non-descended or have undeveloped scrotal sacs and sub-adults, if testes were partially descended. Rodents with fully descended testes were considered as adults. In females, the external signs of sexual maturity were assessed from the condition of the vagina and the teats (Aplin et al., 2003, Bekele and Leirs, 1997; Gebresilassie et al., 2006). Females with an open vagina and enlarged teats were considered as adults. A female rodent was considered as currently lactating if the teats are enlarged and the mammary glands are producing milk. Reproductive activities from internal characteristics were assessed after the animals were dissected. A male rodent was considered sexually mature when it possessed large testes, each with prominent blood supply and enlarged epididymis. In a female, features of the uterine horns that can be observed by naked eye or with dissecting microscope was used to determine sexual maturity. Slightly thicker and more elongated uterine horns with a more obvious blood supply but without embryos or placental scars characterize an individual that is entering its first breeding season. Thicker uterine horns with embryo in one or both uterine horns indicate pregnancy (Aplin et al., 2003). The number of embryo in each uterine horn was counted and recorded for pregnant females.
Diet analysis
Out of the snap trapped rodents, 150 were dissected and their stomachs were removed for identifying the diet of rodents in the laboratory following the methods of Leirs (1994). Stomachs were preserved in container containing 10% formalin after identification tag was attached to each stomach until microscopic examination of the stomach samples in the laboratory. In the laboratory, the samples were washed with distilled water to remove fine particles and sieved  with sieve of mesh size 0.2 mm for proper  identification and mixed thoroughly. Four slides were prepared for each stomach sample and observed under light microscope to identify the type as well as the proportion of the diet in the sample under study. To quantify the food items of the stomach samples, light microscope with 60x magnification was used. The proportion of different food fragments (leaves of monocots and dicots, seed coats and exoskeleton of arthropods) in the diet was determined by counting the fragments from the entire slide. The presence of food items was recorded in all the prepared slides and was grouped into different types: leaves, seeds, animal matter and unrecognized food item. Chi-square test (χ2) was used to test the 1:1 ratio of male and female rodents captured at 0.05 levels of significance.

Species composition
From a total of 326 rodents captured in 1320 trap nights, four rodent species were identified: namely, Rattus rattus, Lemniscomys barbarus, Mastomus natalensis and Arvicanthis dembeensis. Out of the total capture, Lemniscomys barbarus comprised the largest proportion of the capture with 123 individuals (37.73%) followed by R. rattus with 92 individuals (28.22%).  M. natalensis and A. dembeensis comprised 20.25 and 17.69% of the total capture with 66 and 46 individuals, respectively (Table 1). Among snap trapped species, 164 (50.31%) were males and 162 (49. 69%) were females and this proportion was not significantly different from a 1:1 sex ratio (P = 0.856). 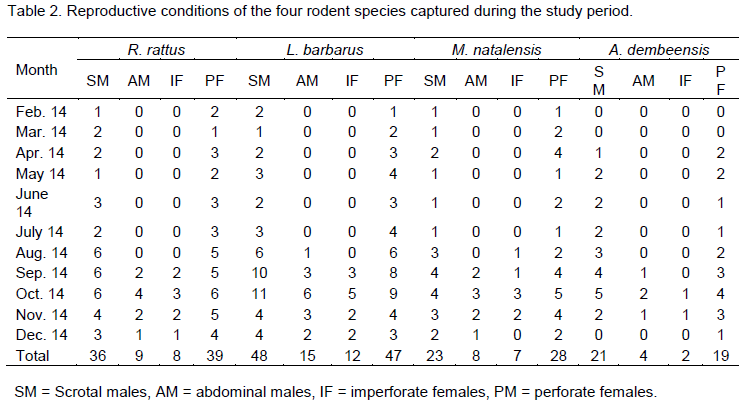 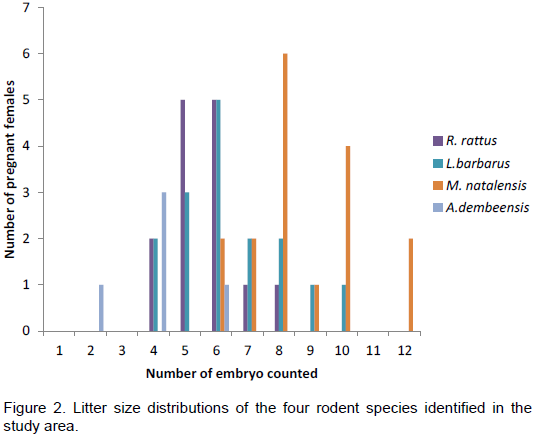 The authors thank Jimma University for funding the research. We are also grateful to the development agents (agricultural extension workers) for their help during data collection and the farmers who allowed as to carry out this study in their farm lands.