Black crowned crane (Balearica pavonina) is a bird in the crane family of Gruidae with black legs and its head is graced with a golden crown (Figure 1). 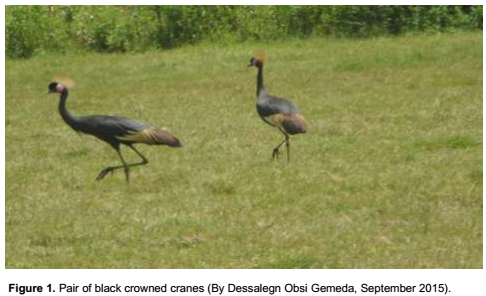 The black crowned crane is one of the six crane species in Africa (Harris and Mirande, 2013). Home range of this species is from Senegal and Gambia on the Atlantic coast to the upper Nile River basin in Sudan and the Ethiopia highlands (Meine and Archibald, 1996; Boere et al., 2006). In Ethiopia, black crowned cranes are resident throughout the western parts of the country and the rift valley lakes (Nowald et al., 2007). This bird species uses open grasslands, shallow wetlands and grasslands adjacent to water bodies for feeding, breeding and resting (Williams et al., 2003; Diagana et al., 2006; IUCN, 2012). The species experience local daily and seasonal movements for searching of feeding and breeding sites (Meine and Archibald, 1996).

The black crowned crane is categorized as vulnerable species (IUCN, 2012). It’s population is declining across its home range and it is even disappearing in some countries (Meine and Archibeld, 1996; Williams et al., 2003; Boereet al., 2006; Beilfuss et al., 2007; Harris and Mirande, 2013). It is predicted that the population decline will continue in the future due to habitat loss and trapping of cranes for domestication (IUCN, 2012). In the countries where the species is present, wetland degradation and lose is becoming a serious threat for the survival of the species. Harris and Mirande (2013) reported that the rapid human population growth, intensive land use and different economic development with poor environmental protection that threat the survival of black crowned cranes in sub-Saharan Africa.

The study took place in Chora Boter, district of Jimma Zone (Figure 2), which is located in Oromia National Regional State in southwestern part of Ethiopia. Chora Boter is rich in wetlands, swamps, grasslands, forests and various wildlife including birds. Chora Boter is one of the 18 districts of Jimma zone with the total area of 1478 km2 (CSA, 2012). According to the 2007 Ethiopian census, the total population of Chora Boter was around 90,695 out of which 45,916 and 44,779 are males and females respectively. 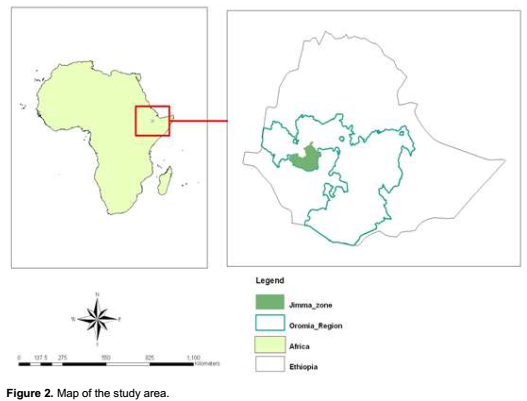 Respondents were purposively sampled from Chora Boter district, Dire Mecha village due to the adjacent to Cheleleki wetlands where the black crowned cranes reside the whole year. One hundred and five (105) respondents were purposively selected from farmers, development agents, teachers, students, local merchants and religious leaders residing around the wetlands. Three focus group discussions (FGDs) each consisting 8 participants from Dire Mecha village were held in the month of October 2015 to assess the current status of black crowned cranes: its habitat, breeding, threats as well as its conflicts with humans in the area.

Field observation was carried out in both wet and dry seasons. During field observation, equipments like GPS, Bushnell binocular 10*42, digital and video camera, and notebook were used for data recording. Due to the limited number of crane individuals and their preference for open habitats, complete counts (Dowding and Greene, 2012) were conducted when the birds were active in the early morning (6.30:10.00 am) and late afternoon from 4.30: 6.00 pm (Bibby et al., 2000; Sutherland, 2000). Multiple count method of (Gregory et al., 2004) was also applied to analyze population variation over time in the study area. All observations was counted and recorded. Focus-group interview (Rabiee, 2004) was also conducted to assess people knowledge, attitudes and perception of local people towards black crowned cranes conservation in the area.

Both quantitative and qualitative techniques were used for data analysis. The quantitative data collected through the survey was analyzed by using Statistical Package for Social Sciences (SPSS). Descriptive statistics such as frequency and percentage were used to measure respondent’s age and year of living in the study area and the findings were presented using tables and figures. Chi-square test was used to determine the relationship between respondent’s knowledge, attitude and perceptions on Black crowned crane conservation.

The demographic data of the respondents indicated that66.7% were males and 33.3% females. The age of the respondents varies from 15 to 75 with an average age of 30.05 years and about 40.8% were between 20 to 30 years (Table 1). The majority of respondents, 96.2% reported that they had lived in the study area for more than fifteen years (Table 2). People who lived for a long period of time or born there had better experiences than people who lived for a couple of days or months. With the exception of professionals persons like teachers (4.8%) and development agents (2.9%), the majority of the interviewed people (92.3%) were born in the area. Because of long residency period of the respondents, they have sufficient information on the status of black crowned cranes.

Table 3 indicates the educational and occupation status of the respondents. The overall level of education in the study area is very low: 39% of the respondents have not received formal education, 42.9% primary school, 12.4% secondary school and 5.7% have tertiary education. Similar to other parts of the country, the majority of the population depends on agricultural activities. The occupation structure of the respondent’s was varied which includes farmers (76.2%), students (12.4%), teachers (4.8%), development agent (2.9%), religious leaders (1.9%) and another 1.9% were petty business men. Since most of the population depends on agriculture, there is a high probability of conversions of wetlands in to agricultural lands that will lead to crane habitat loss. During the focus group discussions at village level, the participants confirmed that conversion of wetlands to agricultural lands affect the life black crowned cranes and these activities seriously affect in the future if wetland protection and conservation is not implemented in the study area. This finding is consistent with the IUCN assessment report of 2012. 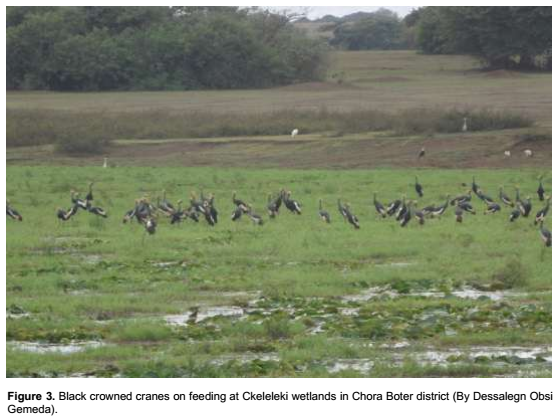 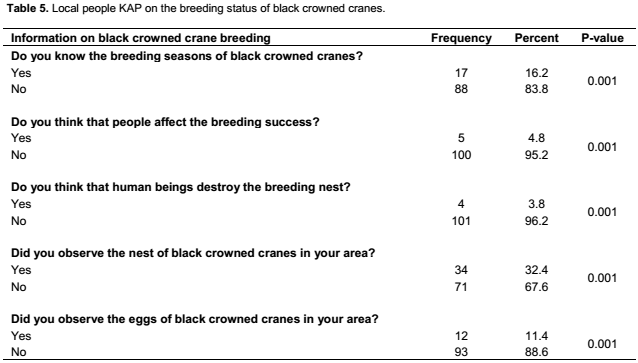 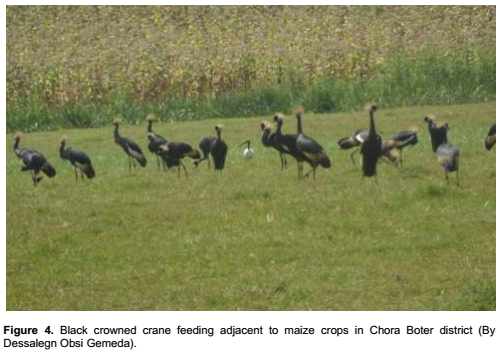 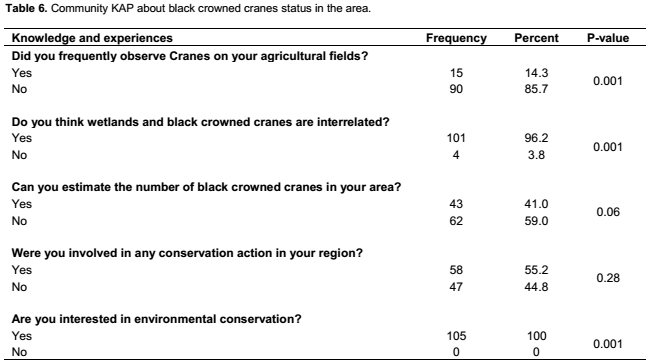 Although, 39% of the respondents had no formal education, the governments of Ethiopia provide some training for the farmers, especially on soil and water conservation with less emphasis on biodiversity conservation specifically wetlands. The overall respondents showed that about 55.2% have been involved in environmental educations through district agricultural bureau and village development agents. The communities are open minded to take any capacity building specially on the environmental aspects because of the fact that they are observing some impacts of climate change on their livelihoods. All respondents (100%) showed their interest to participate on any environmental conservation training. 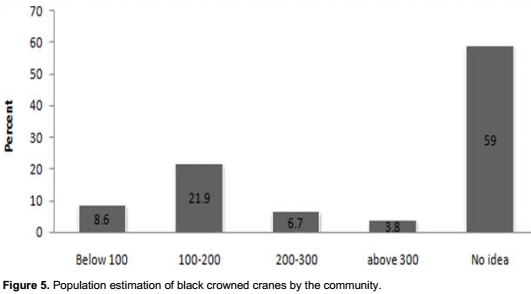 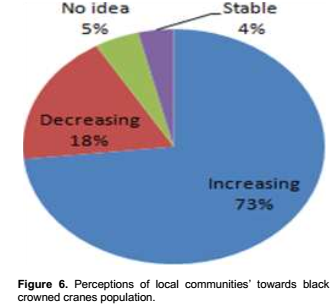 The authors are also grateful for the contributions of many people starting from the conception to finalization of the project; Mr. Stuart Paterson, executive manager of Fauna and Flora International, who provide training for the principal investigator (Mr. Dessalegn Obsi) on the project planning and proposal writing through workshop and also provided a referee statement to the donor; Dr. ir.L. (Lukas) Grus, Laboratory of Geo-information Science and remote sensing, Wageningen University, the Netherlands who recommend the project for the donor; Dr. Rene Haaroff, Head of Department of Tourism and Event Management at Central University of Technology, Free State in South Africa, for providing statement of referee to the donor; Dr. Kitessa Hunders, Jimma University Department of Biology, for providing the recommendations letter to the donor; Mr. Melkamu Dumessa, Jimma University, who edit the proposal during application stages; Mr. Mitiku Tezera, for helping with data collection; and lastly, Jimma University College of Agriculture and Veterinary Medicine for its in-kind contribution to the project.