Variability in soil properties is a critical element across wide areas of researches especially in several aspects of agriculture and environment. The objective of this study was to examine the spatial variability of soil properties and factors contributing to the general pattern of variability in Akoko Region. Observations were carried out largely from sampling points and twenty soil samples were collected for laboratory analysis to determine the particle size fraction, soil pH, organic matter content, exchangeable potassium, calcium, magnesium, sodium, cation exchangeable capacity (CEC). The data were subjected to descriptive and factor analysis. The coefficient of variation ranged from 6.85 to 127%. The factor analysis revealed that the variability of the soil properties is mainly due to textural characteristics, chemical properties and organic matter.

Akoko region is located north-east of Ondo State and South-West of Nigeria.  The region lies within longitude 5031' E to 6006'E and latitude 7018'N to 7045'N. Akoko region covers an aerial extent of about 2465.6km2.  Akoko region is situated at an altitude between 270m and 2750m above sea level.  Most parts of the region have undulating terrain, which in many cases are almost completely encircled by high rugged rock outcrops, rising to a height of over 2750 m in some places.

Geologically, Akoko Region is a physiographic region characterized by two major crystalline basement rocks of the main African Precambrian shield.  These are magmatite and granite gnesis, with quartz and pegmatite veins.  These rocks belong to the migmatite-gnesis sub-classification of the basement complex of Nigeria. Akoko Region is located within the humid tropical climate of the forest region, which experiences two climatic seasons namely the rainy season (April – October) and the dry season (November – March).

The soil samples were taken to the laboratory, air-dried, crushed and sieved using a 2mm-sized sieve mesh. Particle size analysis was carried out by Bouyoucos (1962) hydrometer method.  Organic matter content was determined by multiplying the value of soil organic carbon by Van Barnmelen factor of 1724.  The soil pH was determined in water (1:1 soil to water ratio) and in potassium chloride (1:1 soil to solution ratio) using a pH probe.  Sodium and potassium in the filtered extracts were determined in a flame photometer while calcium and magnesium were determined using the Perkin Elemer 5010 atomic absorption spectrophometer. Cation exchangeable capacity was determined by the summation of exchangeable bases and acidity as described in Thomas (1982).

The soil properties were analyzed using descriptive statistics. The mean was used to determine the average distribution of the variables. Other descriptive statistics that were used included the standard deviation which shows how the variable deviates from the mean and the coefficient of variation that shows the percentage of variation of the standard deviation from the mean.

into statistical factors. Principal component analysis was used as the method of factor extraction because it does not require prior estimates of the amount of variation in each of the soil properties explained by the factors. Factor (principal component) analysis was performed on standardized variables using correlation matrix (Table 2) to eliminate the effect of different measurement units on the determination of factor loadings.

The soil properties across the study showed considerable variation for each element. The Cation Exchangeable Capacity and soil pH have low CV of 16.89 and 6.87% respectively while soil calcium, sodium and potassium varied moderately at 27.57, 32.77 and 45.74% respectively. High CV was recorded for magnesium (50.35%) and very high  CV  for  organic  matter (127%).  The very high variation of organic matter arose from the vegetative cover of the area which reduces the impact of rainfall on the earth surface.

Sand and clay exhibited low level of variation of 15.16 and 11.96% respectively while silt proportion is moderately variable with CV of 40.35%

Factor analysis of the soil properties

Before the factor analysis, the initial correlation matrix was generated among the soil properties (Table 2).

The factor analysis approach enables an understanding of the type and extent of relationships between the soil properties. The Eigen value structure of the soil properties are shown in Table 3. In line with Kaiser (1974) suggestion, only the factors with Eigen values greater than unity were retained.  This implies that only the first four factors in the table were retained. These four factors accounted for over 78% of the total variance in the sample.  In order to obtain a clear and consistent pattern of variation, the four factors extracted were rotated using the varimax method. 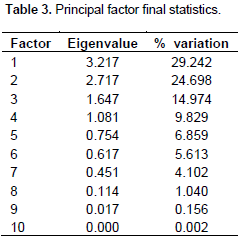 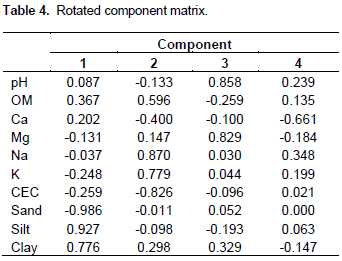