Undoubtedly traffic congestion continues to be a challenge that negatively impacts socio-economic activities in most cities in the world. It does not only hinder the smooth movement of people but also freight and services. Admittedly, there have been a number of studies that have examined the causes and effects of traffic congestion in Ghanaian cities; nonetheless, these studies have largely concentrated on the larger metropolis which includes Accra and Kumasi with little attention given to mid-sized emerging urban centers. Using data collected from field survey, in-depth interviews and field observations in Sekondi-Takoradi, this study examines the effects of traffic congestion on socio-economic activities along five major road corridors in the study area. The survey data were analyzed using descriptive and inferential statistics while in-depth interviews were integrated with the results using quotes from informants. The findings from the study revealed a spatial variation of the effects of traffic congestion along the five corridors studied. In particular, it was observed that increased traffic congestion led to the reduction in sales made by traders and commercial drivers, while students and workers who used these roads also asserted they often get to school and workplaces very late. The study therefore recommends road expansion along these routes and use of road tolls to regulate the activities of ‘trotro’ (public buses) and taxis in the city in order to minimize traffic congestion in the city.
Key words: Traffic congestion, socio-economic activities, spatial variation, corridors, Takorad, Metropolis.

Epistemologically, this study adopted pragmatism as the philosophical basis and this allowed the use of mixed methods approach for data collection and analysis and analysis of the work. Thus, both qualitative and quantitative techniques were used to achieve convergence and corroboration of the data collected (Johnson and Onwuegbuzie, 2004). For example, interviews from participants from the Department of Urban Roads, Sekondi-Takoradi Metropolitan Assembly and terminals at Takoradi’s CBD were used to support or corroborate patterns and measures obtained from the quantitative responses of the respondents within the research area.
Data collection
The data collection methods included in-depth interviews, personal observation and cross-sectional survey. A total of twenty people were interviewed and this comprised public officials with knowledge about transport planning, workers who ply these road almost every day and drivers. For instance, on Corridor 2 staff and employees in Ajumakoman Press, Shell and Goil Filling Stations were interviewed. Key personnel from the Department of Urban Roads, STMA, DVLA, MTTU, Metro Mass Yard the major terminals in the city were also interviewed to provide technical  input  into  the research. Most of the interviews were conducted withina duration of 30 to 45 min. The interviews were conducted using an interview guide. The breakdown of the respondents of the questionnaire is shown in Table 7.
A total of 120 respondents were sampled for this study. Four categories of people were targeted for the survey. These were commercial drivers, passengers, traders including markers sellers and formal employees. In the absence of official data of the number of people that use these roads daily, the researcher had no other option than of equally distributing the total sample across the five main corridors that were being studied. Thus 24 people were sampled along the 5 road corridors. The sampling process was done in two stages. First a stratification of the four groups was done. After, respondents who fell within the four strata were randomly sampled as the researchers walked along the road.Below are the corridors, also termed as zones or master stations (MS) in Mahama (2012) in their study of vehicular traffic in Takoradi and which is also being adopted in this study.
Zone 1: Areas in and around the Takoradi Market Circle
Zone 2: Paa Grant Roundabout near New Takoradi and the Takoradi Polytechnic (T- Poly) Traffic Light Junction.
Zone 3: Effiakuma Traffic Light popularly known as Number Nine Traffic Light. Zone 4: Tanokrom Traffic Light also known as Pipe Ano Traffic Light.
Zone 5: Kwame Nkrumah Circle which is popularly referred to as Ajep Roundabout,
These zones comprised arterial roads linking different areas within the Metropolis to the city centre and are located within some residential suburbs as well (Figure 1). For this reason, the questionnaires were administered not only along the roads but also in the suburbs within which the roads are located. A typical example was New Site located around the road from Effiakuma Junction to Takoradi Polytechnic.
Description of variables
Both the dependent variable and the independent variable were ranked using the Likert scale 1 to 5, where for severity of traffic, a value of 1 represented very low congestion, 2 represented low congestion, 3 represented moderate congestion, 4 represented high congestion and 5, very high congestion. In the case of socio-economic activities a scale of 1 represented very low effects, 2 represented low effects, 3 represented moderate effects, and 4 represented high effects and 5 for very high effects. It implied that for the severity of traffic congestion to have a positive relationship with the effects (socio-economic activities) the beta value from the regression model has to be positive and a negative value of the beta also represented a negative relationship between the two variables. A key advantage of this technique is it made it easier to study the individual influence of the cause variables (traffic congestion) on the socio-economic effects (Abdal-Salam, 2008).
Data analysis
In analyzing the data, interviews conducted from the field were transcribed, analysed and discussed using the narrative technique. There was a translation of interviews into the English language where necessary. The translated and transcribed interviews were later added to the findings of the study where they provided insight into the discussion done. This helped to follow the participants (interviewees) “down their trails’’ (Reissman, 2002; Teye, 2012). There was also discussion of the observations made on the field. In order to identify the degree of the relationship between the severity
of traffic congestion (predictor variable or Independent Variable (IV)) and the socio-economic activities (Dependent Variables) in Takoradi, a simple linear regression was performed (Atindanbila, 2013; Button and Hensher, 2001). Using the Statistical Package for the Social Sciences (SPSS) version 20, the strength and level of significance between the independent variables and the dependent variables were determined. The regression equation is as follows,
Linear regression model α = βx +c,
Where α = Dependent or response variable (Socio economic Activities), X= Independent or Explanatory Variable (Severity of Traffic Congestion). β = the slope or gradient of the line. C = Regression Constant, the intercept (the value of α when x = 0). 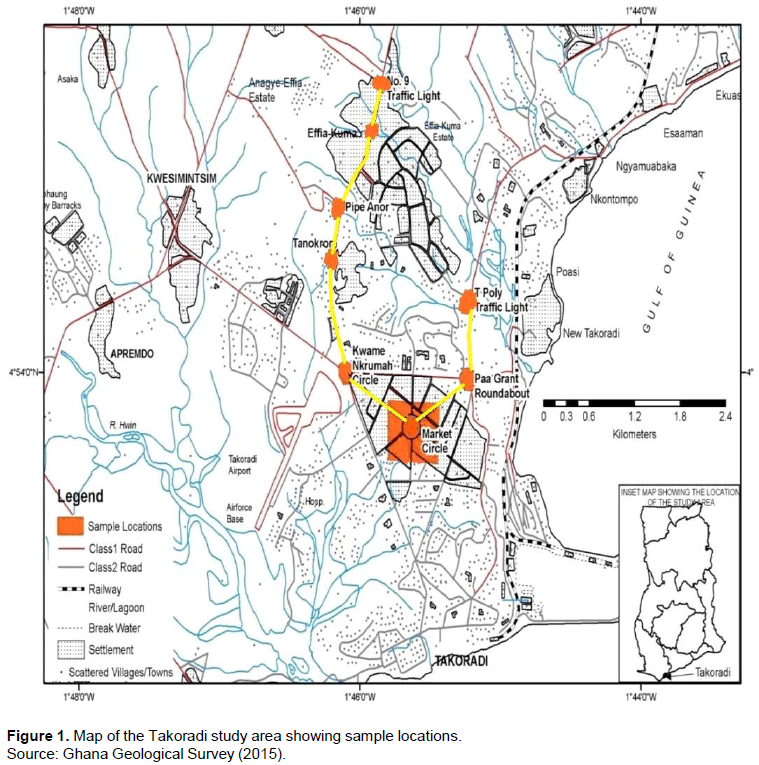 This paper brings to the table the particular challenges faced in most cities in the world. It is however not a new fact to announce though, nonetheless, the dimension we sought to focus on in this study can be linked to a rather more appalling situation. Takoradi with her expected growth could be a curse in disguise for particularly the city dwellers if traffic congestion is not checked. The paper therefore presents evidence and direct examples on how the city can be rescued. In discussing the remedies to the canker, the study suggests the need for the formation of minor companies to regulate the activities of ‘trotros’ and taxis in the Metropolis.
Furthermore, there is the need to expand the roads to make way for the realization of the bus rapid system which has been on the heart of the government in recent times. Such a recommendation will allow space for large articulated trucks and vehicles (buses) that travel relatively slow thereby causing traffic on the roads. In addition there is the need for rehabilitation of the railway line to ease the pressure on the roads. Firm regulations have to be made and implemented to discourage old vehicles from being used in the city, as they are a greater contributor to air pollution on the roads. A more critical recommendation is the need to decongest the CBD. This could be achieved through the establishment of other market centres and other socio-economic facilities such as hotels and vehicular terminals outside the CBD that is, areas far from the Market Circle  to  serve  as  intervening opportunities. Finally, the building of settlements within the Metropolis should be well- regulated by the city authorities to make the roads easily accessible in the towns.

We want to offer our sincere appreciation to Professor Alex Boakye Asiedu and Dr. Isaac Kwabena Arthur from the Department of Geography and Resource Development, University of Ghana for their supervision of the MPhil thesis of the first author from which this paper was developed. We also thank the Ghana Education Trust Fund (GETFUND) for the financial support for the data collection. We want to use this opportunity to thank officials of the physical planning unit of the Sekondi-Takoradi Metropolitan Assembly for the information they shared with us.