Rural-urban migration, a multidimensional phenomenon, is becoming part of the daily reality in Ghana and many other developing countries. For instance, the impact of migration on households whose member(s) migrated is relatively not very clear. A study was therefore undertaken to examine and explain the impact of rural-urban migration on rural migrant’s households’ livelihood in three communities in Agona West Municipality, Ghana. Snowballing technique was used to select and interviewed 121 respondents to obtain information on the motives of migration and the impact of remittances on household livelihoods. Eight male and female heads of households were purposively selected from each village for the focus group discussion. Frequencies, percentages, diagrams and tables were used to explain the data obtained. The study identified two types of households; the migrant and non-migrant households. Also it was observed that males, were often forced to migrate because of their poor living conditions and low educational attainment, the better-off migrant households characterized with higher educational attainment on the other hand, often migrate in order to accumulate more wealth. The better-off migrant households are therefore positively impacted; better access to health-care, more education opportunities, and agriculture than the poor migrant households. The study therefore recommended that government policy on poverty and employment especially for rural areas need to be revisited for better employment opportunities in the rural areas for the young adults and thereby curb the drift to urban areas.
Key words: Migrant households, non-migrant households, poor households, better-off households, remittances, socio-economic status, household livelihoods.

LITERATURE REVIEW AND THEORIES OF MIGRATION

The concept of a livelihood strategy has become central to development practices in recent years. However, the uncountable possible proportional mixes of activities undertaken by a households, is not always clear regarding the constituents of a distinct livelihood rather than just a slightly different mix of activities within the same general livelihood (McDowell and Hess, 2012). A precise operational definition of livelihood remains vague, as does an associated method for identifying livelihoods in quantitative data (Francis, 1999). This probably helps explain why the more quantitative development scholars  (e.g. economists) have been slower to adopt the concept as compared to the most qualitative ones (e.g. anthropologists and sociologists).
The ability to operationalised the concept of a livelihood strategy becomes especially important when examining the ‘improvement’ of livelihood to paraphrase much current development discussion (Scoones, 2009). Thus it is quite important in choosing distinct livelihood strategies that earn high returns for households, especially in rural agricultural areas.
As explained earlier on, this study adopted the“migration as a livelihoods strategy” as its conceptual framework which was originally adapted by Thiemes (2005) from the Sustainable Livelihood Framework. This framework is seen to be the appropriate framework for this study because it clearly shows the relationships between migration and livelihood outcomes taking into consideration how vulnerable households are to external effects (Figure 1).
The basic elements of most livelihood frameworks are: livelihood resources: what people have, variously referred to as stocks and stores, assets and capital (both tangible and intangible); livelihood strategies: what people do (e.g. agriculture, wage labour, migration); livelihood outcomes: what goals they are pursuing, and the living that results from their activities.
As a component of the framework (Figure 2), livelihood strategies differ with regard to whether people have to deal with gradual changes or crises Carney (1998). These are agricultural intensification, livelihood diversification and migration (Carney and Clark, 2008). Agriculture is notably the most important economic activity of rural households in most developing countries (Tsegai, 2005). In the past, it has often been assumed that increased in farm productivity would create more non-farm income earning opportunities in the rural economy via linkage effects.
However, this assumption is no longer tenable for many poor rural families as it is obvious that farming on its own is unable to provide a sufficient means of survival (Potts, 2009).
As a result of inadequate income from agriculture, most households are compelled to embark on livelihood diversification strategies such as migration, in order to vary the sources of household income (Afshar, 2003). In sub-Saharan Africa, most household level diversifications are not just non-farm, but also non-rural in character, such as rural-urban migration. It is widely agreed that the capability to diversify livelihood is more beneficial for poor rural households (Toulmin et al., 2000; Mack et al., (2005) however argues that having alternatives source of income generation can make the difference between sustainable livelihood and destitution. Diversification does not necessarily have an equalising effect on overall, rural incomes as families, that are relatively better-off are typically more able to diversify their livelihoods than poorer rural families (Ellis, 2000). 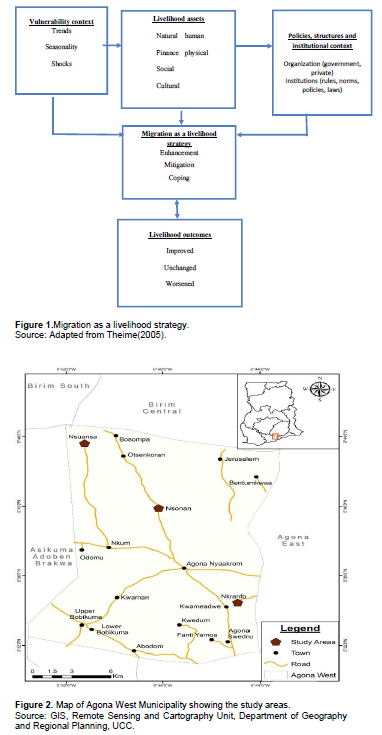 Research philosophy
Based on the positivist and the interpretivist research paradigms, the mixed method approach (quantitative and qualitative) was used. The data collected from both the quantitative and qualitative will add more credence from the result that will be obtained from the field.
Data, sources and target population
Data for this study were collected from primary sources from the respondents on the field. The secondary sources include information from GSS, literatures and other relevant records.
The target population for the study consisted of households’ heads from the three selected study communities: Nkranfo, Nsuansa, and Nsonan in Agona West Munipality. The selection of these communities was based on the fact that the rate of youth out-migration in these communities is more frequent and higher (Arthur, 2009; Agona West Municipal Authority, 2014).
Sampling technique and procedure
The sample size for the study was 169 made up of 121 household heads who had some household members as out-migrants and 48 key informants from the study communities to partake in the focus group discussion. About 171 household were identified in the three communities during a reconnaissance survey but only 169 respondents accepted to participate in the actual survey.
Purposive sampling technique was used to select the three communities for the study. Purposive because it was observed that the rate of youth out-migration in these communities are more frequent and higher, as such the likelihood of obtaining the needed information for the study could be easy (Arthur, 2009; Agona West Municipal Authority, 2014). Snowballing technique was then used to randomly identify and select 175 migrant households. Quota allocation based on number of migrants’ was used to select Nkranfo (39), Nsuansa (50), and Nsonan (32) in the study areas. Snowballing technique was then used to identify households that have family members that have migrated through the help of the community leaders who identified some migrant households who in turn identified other migrant households until the required sample size was obtained for each community (Table 1).
Research instruments and data processing and analysis
Interview schedule, questionnaire and focus group discussions (FDG) were used to obtain the necessary information for the study. The responses from the interview schedule was then numbered serially, edited, coded and summarised in tables, charts and graphs, frequencies and percentages. The FGD’s were cleaned and manually transcribed verbatim to supplement the quantitative result.

A large proportion of rural out-migrants from Agona West Municipality are mostly young adult males within the age category of 20 to 30 years.
Generally, the migrants have various motives for migrating, but most people move from the study areas because of economic reasons such as employment. This is because their level of employment increased after migration since unemployment among the migrants was higher after migration as compared to before migration.
Remittances were frequently sent by most migrants to their households members on monthly bases and mainly in the form of money. The highest amount of money remitted among most migrants to their household members is between 201 to 300 Ghana cedis per month.
A large proportion of remittances received by migrants’ households are largely used for household consumption such as food and this lead to improvement in the livelihood status of the migrant’s households in the study areas, the Agona West Municipality.

The following policy recommendations are made based on the findings from the field work, Agona West Municipality Authority should encourage the young people in the study area to take advantage of the numerous social interventions programmes established by government. The National Youth Empowerment Programme aimed at providing jobs for young peopleeither living in the rural or urban areas in the country. The Ministry of Agriculture and Agona West Municipality should ensure effective and efficient support for rural farmers to make farming attractive to the young people.Future research should be carried out to compare the differences between the livelihood status of migrants’ and non-migrants households in other municipalities study areas.