Integrating tiny and small homes into the urban landscape: History, land use barriers and potential solutions

Across the United States of America (USA), there is an increased interest in tiny and small home living. In locations as diverse as Portland, Oregon; Spur, Texas; and Rockledge, Florida, tiny house advocates are challenging existing land use regulations in order to integrate tiny homes into the surrounding community. Though, there is no formal definition as to the specific size a “tiny” home must be, many proponents regard anything smaller than 400 square feet to be tiny (Tiny House Talk, 2015). However, small homes, generally averaging 1,000 square feet or less, are also frequently included in the tiny house movement (Tiny House Giant Journey, 2015). Tiny houses on wheels, (THOWs) offer opportunities for both downsized and mobile living, and are associated with the tiny house movement itself. However, all these dwellings face hurdles to urban integration because of current land use policies that discourage building and living in small homes. As a result, the construction of tiny homes, or even traditional cottages, is illegal in many urban places throughout the United States. As the average size of the American home has continued to increase from 1,535 square feet in 1973 to an average of 2,480 square feet in 2011 (Schwartz, 2014), the tiny house counter-culture movement makes a powerful statement. There are several driving forces behind the growing tiny house movement. Among them are increased environmental concerns, a growing dissatisfaction with excessive materialism, a greater cultural awareness of the American cycle of debt, and a desire to use small structures as a practical means of housing the poor and homeless (Gauer, 2004; Heben 2014; Anson 2014).
However, housing affordability is likely the greatest driver behind the growing interest in tiny houses. The literature reveals that affordable housing opportunities are lacking for many Americans (Sanders and Mosena, 1982; Wright, 1983; Calfee and Weissman, 2012; Ross, 2014; Schwartz, 2014; Desmond, 2018). It is frequently recommended that households should not spend more than 30% of their income on housing (Schwartz, 2014, 32; Desmond, 2018), yet over 50% of Americans are paying more than 30% of their earnings for housing (Glaeser and Gyourko, 2009). Furthermore, a shocking 27% of renters are paying more than 50% of their income on housing (Schwartz, 2014). The primary reason for the increasing problem with unaffordable housing in the USA is the widening gap in income inequality (Collins and Yeskel, 2005; Glaeser and Gyourko, 2009; Schwartz, 2014; Leigh and Blakely, 2016), coupled with the fact that American housing and land use policy has been crafted to predominantly serve the interests of the wealthy (Boudreaux, 2011; Bratt et al., 2013). Tiny houses may offer a means of addressing increasing housing affordability issues. Dwelling size is not the only factor that affects affordability. Tiny house costs can vary greatly depending on factors such as whether one builds themselves or hires a builder, construction materials used and lot price. For example, one popular tiny house blog, ‘Tiny House, Giant Journey’ (March 15, 2016) estimates that the average THOW can cost between $35,000 and $45,000. However, ‘Tiny House Blog’ (September 26, 2016) gives a much wider estimate of $500 to $80,000.
Therefore, depending on a person’s income and building plans, a tiny house could be either affordable or unaffordable. However, it remains true that with other factors remaining constant, it is more affordable to build and live in small, rather than large homes.There is currently a shortage of available small houses and/or apartments in the United States (Infranca, 2014). Furthermore, there is no adequate housing to serve those with low-incomes (Shlay, 2006; Schwartz, 2014). One housing scholar estimates that in the United States, there is currently a shortfall of 4.9 million affordable units (Schwartz, 2014). Schwartz (2014) explains that part of the problem around housing affordability are the current regulations that dictate the, “… size, density, and quality of homes that make them unaffordable through zoning and building codes” (48). He follows up with, “… families may be able to afford, say 500 square foot homes, but units of this size may fall below the minimum requirement” (48). Such regulations make it difficult to create small and affordable housing and are a thorn in the side of many tiny house proponents. This review provides a chronological and critical assessment of tiny and small homes in the USA over the last century (Table 1). This study first reviews the evolution of small house dwelling in the USA. It shows that living in small homes is not a new concept, and how and why people began building increasingly larger homes, sometimes beyond their fiscal means. It also examines American counterculture movements from the 1960s to present. These ideas are important in understanding the impetus behind the current tiny house movement, and why interest in living small will likely continue to grow. The paper then examines the several regulatory barriers to small home integration. It indicates that the barriers are more than superficial, but deep-rooted and systemic. Finally, the review examines potential strategies to urban tiny house assimilation. 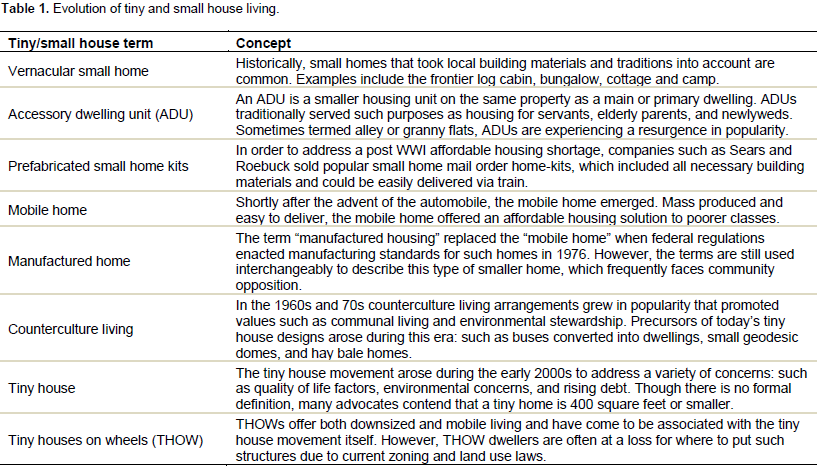 LAND USE BARRIERS TO SMALL DWELLINGS

The evidence suggests that interest in tiny and small house living will continue to grow in order to address issues of increasing housing unaffordability, and as a means of pursuing counterculture lifestyles. What remains to be examined is how municipalities can best integrate tiny and small houses into urban communities, while retaining good city form. There is also a need to investigate the relationship between individuals’ perceptions of tiny house aesthetics and how those perceptions may affect resulting land use policy. For instance, some communities may prohibit ADUs and others may encourage them because of differing perceptions about ADU aesthetics, increased density standards and the creation of rental opportunities in neighborhoods. Work is currently being done on these issues (Evans, 2017). The study examines how communities are creating tiny house policy, the barriers along the way, and how perceptions of tiny homes influence policy outcomes. The research finds some preferences for the various ways tiny houses may be integrated into urban areas and for specific design elements. The study furthermore finds several “best practices” to tiny house integration, among them, the development of tiny house infill measures that will not adversely impact surrounding property values. The research may lead to a better understanding of how tiny and small house land use policy might best be crafted.
Research that examines the viability of tiny and small house living is also warranted. The review indicates that tiny and small house dwelling is being pursued in order to address both housing affordability and quality of life factors. However, it is unknown if such benefits are actualized. Research that examines such factors as tiny house dwelling longevity and dweller satisfaction is needed. An economic analysis of the tiny, small and THOW market is also warrantedogh. For instance, it is unclear what happens with the resale price of tiny homes, especially THOWs. In general, homes are considered appreciating assets. However, because they are not on permanent foundations, THOWs may be considered depreciating assets under current finance and assessment methods. Therefore, though many home-owners consider their home to be their greatest financial investment, this may not necessarily be the case for THOW owners. Developing an understanding of these dynamics is important, as it may influence community receptiveness to the integration of tiny and small houses into urban areas.