There is an emerging debate in the literature of urbanism that public open space is in crisis in the cities of developing countries due to the increasing trends of urbanization and in-migration. With the significant growth of the urban population and rapid expansion of the city, the land demand for housing and other infrastructure development is very high. The high rate of urbanization due to which encroachment, high speculation, use change, etc. are the major reasons for decreasing public open spaces. There are many inferences that public open spaces are decreasing in Kathmandu Metropolitan City (KMC) as Tundikhel; an important public open space located in the heart of Kathmandu is decreasing in its size and has changed in its use over time. At present, KMC does not have a sizable public open space for emergency uses such as evacuation, relief, recovery, and reconstruction during the catastrophic hazards. Analysis of historical imagery and the changing patterns of land use reveal that the decreasing trends of open spaces may lead more vulnerable to the city as it does not have public open space for disaster management in an emergency need. Moreover, it may have adverse impacts on sociability and well-being as people do not get space for public life activities.

Public open space is a place that is not closed or blocked up and provides access to people for enjoyment, social gatherings, organizing political events, religious, sports, commercial activities, and is controlled and managed for the public interest (Madanipour, 2003; Wooley, 2003). There is a clear distinction between public open space and open space. Open space can be accounted for all types of open spaces including private and public open areas, whereas public open space is the open space that is accessible to all people without any restrictions. It means all public open areas are open space but all open areas may not be the public open space. In the urban contexts, open spaces contribute to the urban  residence that underpins many social, ecological, and economic activities, and are essential to the healthy functioning of urban life and environment (RECPHEC, 2016; UN-Habitat, 2018). These spaces are valuable for urban residence as it provides commonplace for recreation, health enhancement, developing social networking, and enhancing peoples’ well-being. There is increasing debate among the academicians that public open spaces are the essential assets of urban life. But with a rapidly increasing population causing a high growth rate of urbanization has been demanding more land for housing, infrastructure development in the cities of developing countries  which
has   led   to   decreasing   public  open spaces. Evidence reveals that public open spaces in the cities of developing countries are very limited which may result in limiting public life as people do not get space for public interactions, recreations, and organizing public events (UN-Habitat, 2018). Cities in developing countries are facing a public/open space crisis. High population growth and in-migration leading to urbanization in the cities like KMC are the major causes of decreasing the public/open space. So discussions about urbanization and land-use trend are pertinent to present how these impact in diminishing public/open space in KMC.
Urbanization refers to the process of growth in the proportion of the population living in urban areas with the structural shift in employment from agriculture to non-agriculture pursuits (Sharma, 2003). The structural shift which is expected in urbanization is always in question in the contexts of Nepal’s urbanization process. As the government declared 293 municipalities in the process of the promulgation of the new federal constitution in 2015, most of these municipalities are still having a reliant base of an agricultural economy. Rural areas are converted into urban areas which are lacking not only the basic infrastructures but are lacking employment in other sectors and heavily dependent on agriculture. Due to which migration still exists between towns and regions from the less potential towns to high potential towns and cities (Devkota, 2018; Suwal, 2014). Kathmandu Valley (KV) is still a potential destination of migrants as it poses a high opportunity for employment, education, and better services there. Due to this, potential cultivable lands are converting into built-up forms leaving no proper public open spaces for recreation and sociability. Furthermore, such a scenario has posed many implications associated with the society linking it with well-being, disaster risk reduction, and the environment.
Kathmandu valley is one of the highest populated, and it has been rapidly expanding its settlement areas from the core to its fringes. Valley’s urbanization is highly dynamic in its spatial pattern, complex in its nature, and expanding built-up areas from the core to its fringes converting agriculture land use into urban use (Thapa, 2009). Development in the valley was taking place with uncontrolled infill development and individual housing in the past. Some planned development initiatives have been ongoing in the later stages to make cities reasonably healthy and sustainable with some provisions of open spaces. However, with increasing population inflow in the valley, land value is highly increasing due to which there is high pressure on open space including the agriculture field (KVDA, 2015; Thapa, 2009).  Due to its rapid urban expansion, public/open spaces are decreasing in such a way that the government now does not get public land for public infrastructure development in the city.  It has also been corroborated that in case of a catastrophic disaster hit, the government would not get essential open space for treatment, emergency relief, rescue, and recovery in Kathmandu.
Despite the conversion of agriculture land into built-up form, there is a trend of decreasing available public land for different uses in Kathmandu. Studies show that Tundikel, a public open space of the heart of Kathmandu has been decreased almost half in the past 60 years in the name of different uses (Shrestha, 2018). Evidence shows that use change, uses transformation, encroachment, etc. are the major reasons for the loss in pubic open space. Similarly, the encroachment of river corridors and some public open spaces in the inner part of KMC is due to the increasing trends of squatter settlements (DUDBC, 2010). Increasing squatter settlements may cause of decreasing public open spaces in Kathmandu. This paper explores urbanization trends and rapid urban expansion in the valley and in KMC to assess how these processes affect to decreasing public/open space and its implications.

This research paper is based on a review of existing literature on open space, urban development, migration, and urbanization of Kathmandu Valley and KMC. Population censuses from 1981 to 2011 and other published secondary data were collected through different sources. Some map data were collected from published and unpublished articles and theses. Data from various institutions such as National Society for Earthquake Technology (NSET), Kathmandu Valley Development Authority (KVDA), Kathmandu Metropolitan City (KMC) were collected, and reviewed and found out the urban expansion pattern in the valley and KMC. Historical images were collected by Google Earth’s historical images and archive data of secondary sources. Similarly, the latest, land use map of KMC was prepared by using the latest Google Earth images in the GIS environment and then further analyzed with image interpretation methods. The GIS data then overlaid with KMC’s previous GIS dataset, 2011 to get changes in urban development trends and patterns to see how changes are occurring to threaten the public/open space.  Likewise, empirical data such as research findings and excerpts were used to interpret on encroachment, uses change and transformation of the open area into built-up form. All the data were thoroughly categorized, interpreted, and then analyzed to get the intended objectives. The details of the methods for collecting data and analysis are presented in Figure 1.
Kathmandu Valley and KMC: Brief overview
Kathmandu Valley comprises three districts namely Kathmandu, Lalitpur, and Bhaktapur together which cover an area of 899 km2, whereas the area of the Valley is 721.87 km2. The Valley encloses the entire area of Kathmandu and Bhaktapur districts and 50% of Lalitpur district. Geographically, the valley is situated between 27°31′55″ to 27°48′56″ North Latitude and 85°11′11″ to 85°31′52″ East Longitude. The valley comprises 18 units of municipalities (2 Metropolitan Cities and 16 Municipalities) with some portion of Bagmati and Konjyoson Rural Municipalities of Lalitpur district.  The valley extends from 1,425 m in its lowest height to 2,732 m highest height. Kathmandu Metropolitan City is the federal capital city of Nepal which is located in the central part of the valley. It is not only the capital of the Federal Democratic Republic of Nepal but it is the historic, political, commercial, cultural, and tourist center of the country (EMI, 2010). The city is the urban core of the Kathmandu Valley with a total area of 50.67km2. It is situated at an average altitude  of  1,350m above sea level. The city is located at 85°19’14” East longitude and 27°42’06” North latitude. Divided into 32 wards, KMC is bordered with Lalitpur Metropolitan City and Kritipur Municipality  in   the   South,   Nagarjun   Municipality   in  the West, Tarkeshwor, Tokha and Budhanilkantha Municipalities in the North and Gokarneshwor, Kageshwari Manohara and Bhaktapur Municipalities in the East (Figure 2). 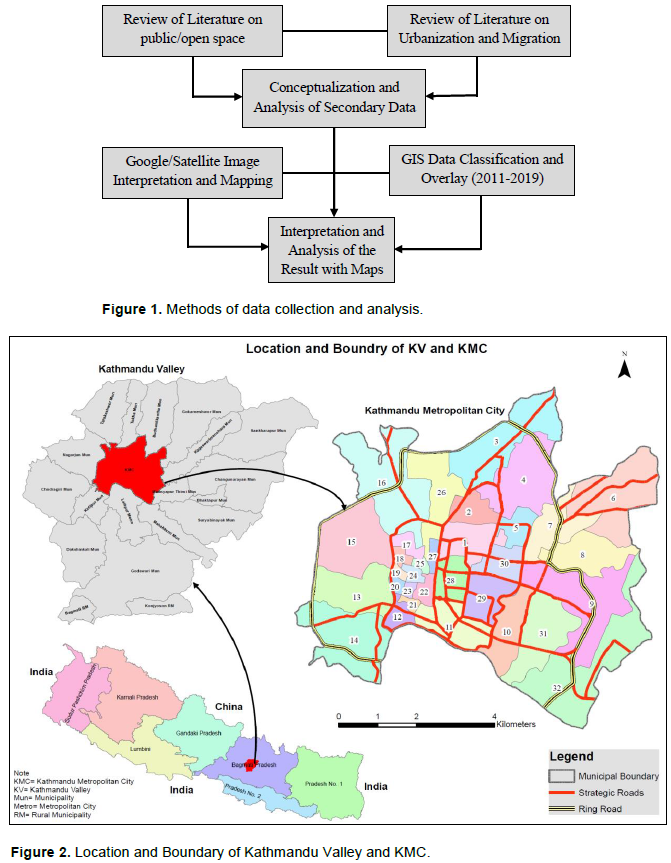 The significant growth of the urban population in KV and KMC leads to diminishing the public open space. The rapid expansion of the cities in the Kathmandu Valley is high due to the high demand of land for housing and infrastructure development to increased population. Now, there are all the local bodies within the valley as urban areas with 18 municipalities including two metropolitan cities that cover almost 24.11% of the total urban population of Nepal. KMC, being the Federal Capital of Nepal, has been attracting the migrant's population for employment, education, and other diplomatic purposes to live in.  The increasing population on the one hand has led to converting the open area into built-up forms and on the other hand, it has been increasing pressure on the available public open spaces for different uses. As a result,  the  public open space is in the stage of vanishing in KMC.
The high rate of in-migration and urbanization due to which encroachment, high speculation, use change, etc. are the major reasons for decreasing public open spaces in Kathmandu. Tundikhel; an important public open space located in the heart of Kathmandu is decreasing in its size and has changed in its use over time. Data shows that in 2019 KMC occupies 58.77% area as mixed-use (residential, commercial) whereas only 5.47% area is under cultivation. Changes in land use/cover from 1980 to 2019 reveal a huge change with 40% growth in the built-up area whereas the cultivation area decreased by almost 53%. The lost cultivated land is converted into a built-up form. Changes have also occurred in the public open space which decreased by 1.76% in the same period. At present, KMC does not have a sizable public open space for emergency uses such as evacuation, relief, and recovery during the catastrophic hazards.  Moreover, it may have another dimension of impact at the community level that decreasing public open space has adverse impacts on sociability and well-being. Hence, the growth trends of KMC suggests that open spaces exist today will no more available for future generations. Encroachment by the squatters, use of changes (institutional and other uses), increasing demand for open land for infrastructure development are the major causes of the loss of public/open spaces in KMC. Besides, there is no proper management plan of the existing open spaces which again drives to open space crisis in KMC. Therefore, it is recommended that concerned authorities need to plan effectively to protect the available public open spaces not only for protecting the city environment but for better management of risk and disaster and creat public life activities in the society.