There are wide ranges of factors that determine individual food insecurity within households. In cash crop area products are for market rather than for agricultural households that can cause food accessibility to a severe challenge. There is, however, a dearth of information about the food security status of adolescent living inside coffee farming households. The aim of this study is to investigate the prevalence of adolescent food insecurity and determine its factors among coffee producing districts in Jimma Zone, South west Ethiopia. Community based cross-sectional study was employed in coffee producing district in Jimma zone, from April-May 2016. A total of 550 households having adolescents were included.  Data were entered into EpiData and the analyses were made by SPSS version 20. Bi-variate and multivariable logistic regression was done  and  p-value  <  0.05  considered  as  a  cut-off  point  to  determine  statistical significance. Sixty percent of adolescents (60%) were found to be food insecure. Female adolescents [AOR=2.18, 95%CI (1.4-3.48)], household food insecurity [AOR=9.4, 95%CI (5.49-16.19)], male of household heads [AOR=2.77, 95%CI (1.44-5.33)], high dependency ratio [AOR=2.53,  95%CI  (1.447-4.446)],  not  formally  educated  household  head  [AOR=4.925, 95%CI (2.636-9.201)] and have no own land for farm [AOR=2.484, 95%CI (1.24-4.96)] were positively independent predictors of adolescent food insecurity. This study highlighted the problem of food insecurity in coffee producing farmers. Sex of adolescent, dependency ratio, sex of household head, household heads’ educational status, food security status of household and farm land owner ship are predictors of adolescent food insecurity. This pushes us to advance direct nutrition interventions focusing on adolescents to endorse catch-up growth and break the intergenerational cycle of malnutrition.

Study area and design
The study was conducted in Jimma Zone, Southwestern Ethiopia at community level. The study is a cross sectional design. Jimma Zone is known for organic Coffee Arabica production. The zone has consistent good rain (Lemessa, 2000); however, the climate of Ethiopia has changed. Ethiopia has been having increased temperature of about 0.3°C per decade (from the 1950s), and in some areas low rainfall (Farming, 2017). This can threaten the food security of the zone.
Sample size calculation and sampling technique
Single population proportion formula was used to determine sample size with the following assumptions: prevalence of adolescents’ food insecurity of 20.5% in Jimma Zone (Belachew et al., 2011); 550 study participants were proportionally allocated to each district; multistage sampling technique was used to get information. The inclusion criteria include: being a permanent registered farmer residing in the districts; at least one that has witnessed the latest harvest season with their adolescents.
Data collection and procedures
To collect the data an organized questionnaire was used. For households’ characteristics, mothers were our primary choice instead of fathers. Pretest was done on 5% nearby districts and all possible amendment was made. The final data were collected by trained nurses, while supervision was made by trained nutritionists. Ethical clearance was obtained from the Review Board of Jimma University, College of Health Sciences and local concerned boys.
Measurements and analysis
Adolescent   food   insecurity   was  calculated   with   a  customized version of the household food security scales by choosing the things that relate to their individual practices (Frongillo et al., 2006; Belachew et al., 2011, 2013, 2012; Webb et al., 2006). They were asked of their last one month’s own experience. Rarely, sometimes and often responses were coded as one and "never" responses were coded as zero; the responses were summed to produce an index of adolescent food insecurity and were further dichotomized as "food secure" for a score equal to zero "food insecure" and a score greater than zero. Household Food Insecurity Access Scale (HFIAS) version 3 was used to measure food insecurity, a tool that has been developed by FAO and FANTA and validated for use in several developing countries to assess household food security status including Ethiopia (Coates et al., 2007).
Data coding and editing was done manually; entry was done using Epi Data 3.1 version and then exported to SPSS version 20 for analysis. Data were checked for its distribution by P-P plot for all numerical variables and also multi-collinearity was checked. Frequencies and percentages of variables were produced and presented in table and graph; wealth index was generated using principal components analysis. Bivariate and multivariable logistic regression analyses were done to get this association: a p- value <0.25 and p-values < 0.05 respectively were the cut offs. 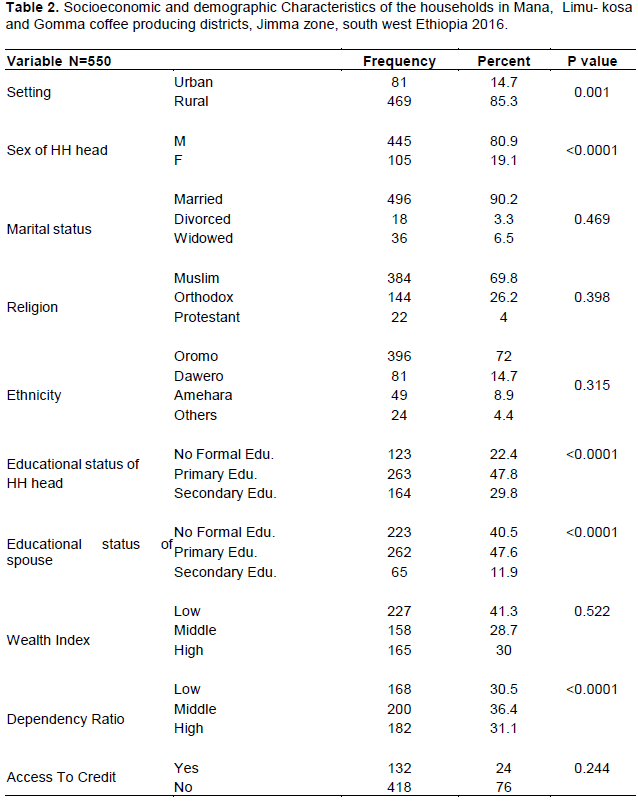 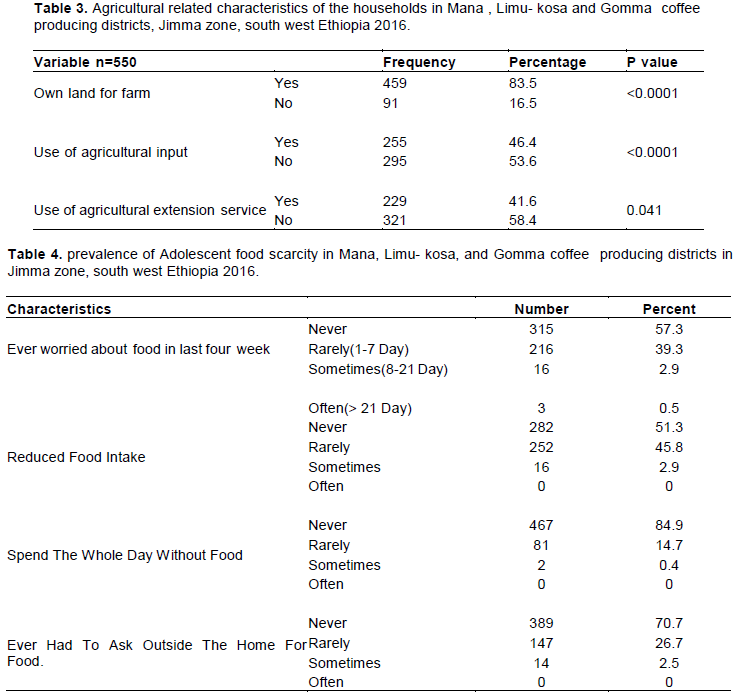 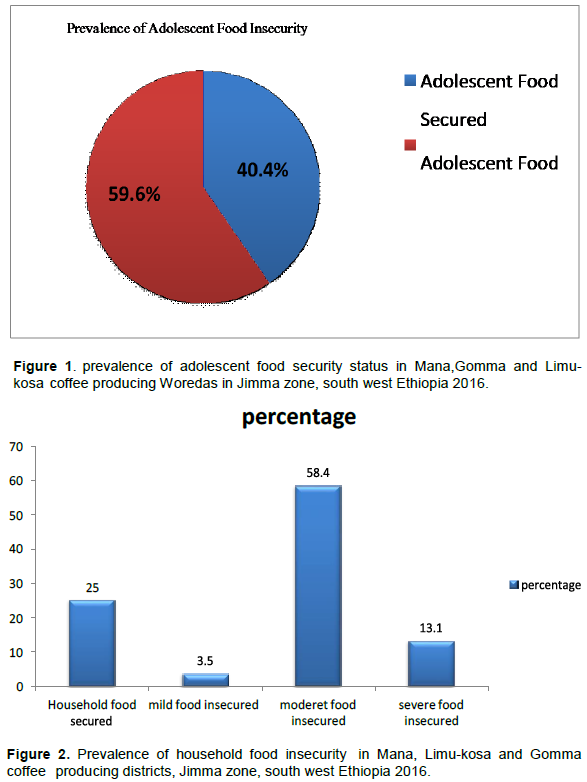 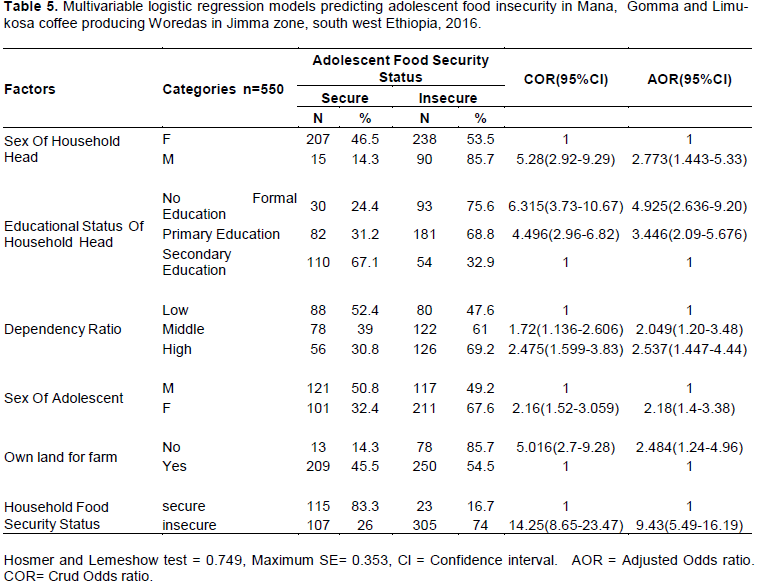 This study revealed that more than half (59.6%) of the adolescents were food insecure which was higher compared to a research conducted in Jimma which was 20.5  and   48.4%,  respectively  (Belachew  et  al.,  2011, 2012).The observed difference could be due to seasonal variation of food insecurity. This study was done in pre harvest (flowering) season of coffee which is more vulnerable to food insecurity. Female adolescents were more likely to be food insecure than their counterparts. This result is inconsistent with research conducted in Zimbabwe where there was no gender difference in adolescent food insecurity (Gundersen et al., 2007). In this study gender stratification might be due to the biased hoarding of food by elders and/ or males have more chance of getting food outside their home.
The findings do make sense in the socio-cultural context of Ethiopia, and definitely in many countries, where patriarchy is the dominant cultural model (Facio, 2013). This finding is best explained by other findings of the study, stating that only 28% females had access to food outside their homes compared to 56% of male adolescents who could access food outside their homes. The study showed majority (75%) households were food insecure calculated from full version of HFIAS tool. The adolescents living in a food insecure households were more likely to be food insecure than adolescents living in a food secure household. This finding is in line with the study conducted in Jimma zone (Belachew et al., 2012). This finding shows elders can give priority to younger children and in sever condition both can experience food insecurity.
In this study adolescents  living  in  a  household  in which the head has completed primary and secondary school were less likely to be food insecure compared to those adolescents whose households’ head are not formally educated (Oluyole et al., 2009; Birhane et al., 2014; Gecho et al., 2014). The possible explanation is educated parents can use advanced technology. Adolescents living in a male headed household were 2.7 times more odds of food insecure than their counterparts. It might be that most males that control financial assets like money spend it for other activity rather than food (Meinzen-et al., 2011). Adolescents who were members of households with high and middle dependency ratio were more likely to report food insecurity compared to those in low dependency ratio households. This study is similar to a study done in Jimma, Nigeria and USA (Belachew et al., 2012; Ojogho, 2010; Coleman-Jensen et al., 2013). This could mean that as the dependent age group size increases, there is larger number of people to be taken care of by the same source of income. Adolescents who are members of households without their own farm land were more likely to be food insecure than their counterparts. The reason is that households who rent land can pay the owner some portion of production from this plot.

Generally, it was found that there was high prevalence of adolescent and household food insecurity in the study area. Sex of adolescent, dependency ratio, sex of household head, educational status of household head, household food security status and farm land owner ship are predictors of adolescent food insecurity. There is need to improve direct nutrition specific interventions targeting adolescents. School feeding program should be an integral component of food security intervention to reduce intergenerational rotation of undernourishment. Multi-sectoral interventions approach should be improved to address multifaceted causes of food insecurity; gender equality and the status of women and girls through operative health information at ordinary level needs to be considered. Further research is required to seethe cyclic pattern of seasonal food insecurity in the study area using different methodological approach like longitudinal study.

Authors would like to express their thankfulness to respective data collectors, supervisors and study participants   for   their   diligence  and  devotion   in   the collecting and inputting high quality data used in the study.