The participation of youths is important in the management of environmental problems. Environmental problems such as deforestation, overgrazing, soil erosion, and improper waste disposal are common in most parts of Ethiopia. Inappropriate environmental policies, population growth, climate change, and low level of awareness and less participation of the public are the major factors responsible for the problems. These environmental problems are affecting the overall agricultural productivity of the country necessitating corrective measures. The participation of youths in environmental management activities is important not only because they are the most productive group of society, but also because they constitute a significant number (30 and 28% of the Ethiopian and the Southern Nations Nationalities and Peoples Regional State (SNNPRS) total population, respectively). This article, in line with the Ethiopian Youth Development and Change Package which is a program designed to materialize the Ethiopian Youth Policy (2004), discusses the success achieved and the challenges encountered in the implementation of the program in SNNPRS. The study is based on primary data collected by household survey from 7,630 youths all over the region. Other relevant secondary data were obtained from different sources. The findings have indicated that significant integrated watershed management activities have been undertaken in the region and as a result, some of the degraded lands rehabilitated, and urban greening and sanitation have improved. However, lack of autonomous organizational structure, weak coordination, lower youths’ participation and perception regarding their responsibility in managing the environment, lack of follow up for environmental management activities, absence of civic societies working in environmental management in the region are found to be problems to be resolved. Deforestation is found now to be the major environmental problem in the region.

Brief description of study area
The SNNPRS, is one of the nine regional states that  constitute  the Federal Democratic Republic of Ethiopia (FDRE). The region is located in the southern part of the country with astronomical location of 4° 43’ and 8° 58’ North latitude and 34° 88’ and 39° 14’ East longitude with a total area of 113,539 square kilometers. The region shares the boundary with Oromia region in the north, east and southeast.  SNNPRS also shares international boundaries with Kenya in the South, and with South Sudan in the southwest. Administratively, the region is divided into 14 zones, one city administration and 4 special woredas/districts. These include Sidama, Hadiya Gedio, Silte, Gurage, Kambata Tembaro, Gamo Goffa, South Omo, Bench Maji, Kafa, Sheka, Dawro, Wolyta and Segen people’s zones and Basketo, Yem, Konta, and Halaba special woredas. Hawassa City, one of the fastest growing cities in Ethiopia, is the administrative seat of Sidama Zone, and the region (BoFED, 2006). The region is the mosaic of diverse ethnic groups with 56 nations and nationalities living together.
Data and methods
The study used both primary and secondary data. The primary data were collected from youth (15-29 years of age based on the Ethiopian Youth Policy, 2004) by using household survey and focus group discussions. A total of randomly selected 7,630 youth from the 14 zones, 4 special woreds/ districts and one city administration were included in the survey from all over the region. A structured questionnaire was distributed to the youths and required data were collected. The secondary data are collected from reports, policy documents and other studies in the area. The present study adopted a mixed method approach. The primary data were thus generated using both qualitative and quantitative procedures while secondary data were gathered from official government statistical reports and administrative data. Interpretations and analyses of primary and secondary data were undertaken using qualitative and quantitative analyses. 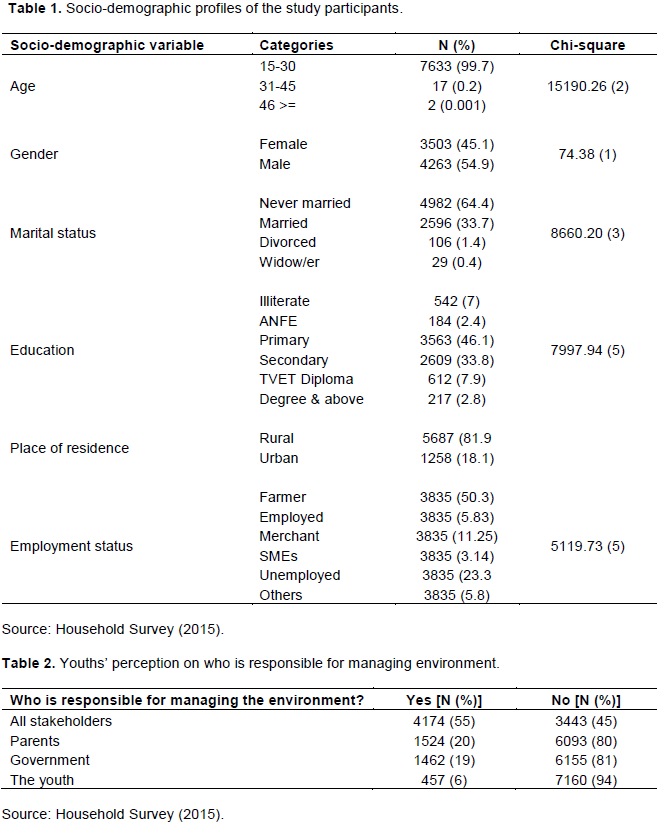