Non pseudomonal Ecthyma gangrenosum: A case report of an infant seen at a tertiary hospital in Sokoto, North-Western Nigeria

Ecthyma gangrenosum (EG) is a cutaneous infection characterized by vesicles or blisters which rapidly evolve into necrotic ulcers with undermined tender erythematous border. It has been rarely reported from the African continent. Pseudomonas aeruginosa is the commonest isolated organism but others, including Staphylococcus aureus (S. aureus) and Escherichia coli ((E. coli) have been reported. A case of EG in a child with S. aureus meningitis in whom E. coli was also isolated is hereby reported. An 8-month old male infant presented with fever (39.2°C) of two days, vomiting, diarrhoea, and body rashes (purpuric lesions mainly on the gluteal area as well as the lower and upper limbs) of one day, and convulsions. He was moderately dehydrated, with neck stiffness and retraction. The rashes subsequently became extensive, appearing as circumscribed, roundish and dark necrotic lesions with surrounding hyperaemia. Full blood count showed marked leucocytosis with neutrophilia. Blood glucose was 6.1 mmol/l, cerebrospinal fluid (CSF) glucose was 3.6 mmol/l and protein was 55 mg/dl, CSF culture yielded S. aureus. Culture of skin lesions was initially negative but later yielded E. coli on repeat sampling. The patient was treated with antibiotics, wound debridement and regular dressings and showed good improvement, evidenced by the gradual healing of skin lesions. EG lesions may be caused by other organisms apart from Pseudomonas.

EG has been rarely reported from the African continent compared to other parts of the world. This may be due to failure to recognise it by clinicians. We report a case of an 8-month old infant suspected to have meningococcemia, with associated skin rashes that evolved into typical lesions of ecthyma gangrenosum from which Escherichia coli was  isolated.  Our  aim  is  to emphasize the need for high index of suspicion in our environment.

An 8-month old previously healthy male infant presented with fever of 2 days, vomiting, diarrhoea, body rashes of 1 day, and an episode of convulsion. The rashes were non-itchy, initially reddish, but became darker and increased in size over a day. They started on the legs then extended up to the thigh, trunk and arms. There was no history of contact with any child suffering from measles and he had not been vaccinated. The convulsions were generalized tonic-clonic with no loss of consciousness. The first episode of convulsion occurred 8 h prior to presentation and the second was few hours after admission. At presentation, he was fully conscious but irritable, febrile (39.2°C), moderately dehydrated and pale. He was lethargic with mild neck retraction but had no meningeal signs. The muscle tone was slightly increased in all the limbs while pupils were normal sized and reactive to light. Anterior fontanelle was flat and not tense. He had purpuric lesions located mainly on the gluteal area, lower limbs and some parts of the upper limbs. He had full volume pulses with a rate of 130 beats/ min and normal heart sounds. Respiratory and digestive systems examinations were normal.

Cerebrospinal fluid sample (CSF) was cloudy, but not under pressure. CSF biochemistry showed marginally low glucose (3.6 mmol/L) relative to the blood glucose (6.1 mmol/L) and slightly increased protein (55 mg/dl) while CSF M/C/S yielded Staphylococcus aureus. Other results were malaria parasite (++), packed cell volume of 29%, normal electrolytes, urea, creatinine. Full blood count showed marked leucocytosis (35 × 10³/µL) with predominance of neutrophils (49.7%, 17.5 × 10³/µL) and low normal platelets (118 × 10³/µL). Retroviral screening was negative. A presumptive diagnosis of meningococcaemia with meningitis and malaria was made. He was commenced on intravenous (I.V) fluids, I.V Ceftriazone, artesunate and dexamethasone. He was also commenced on zinc tablets and oral rehydration solution. By the 5th day on admission, he was still having intermittent fever and passing watery stools. The skin lesions had now coalesced and became more extensive and painful, with some of the lesions having purulent discharge. Analgesics (initially oral paracetamol, then later oral morphine) were introduced and a wound swab was taken. The CSF microscopy showed many pus cells, and though Gram stain was negative, culture yielded S.

Ceftriazone+ and Cotrimoxazole+. The cultured organism was however considered to be a contaminant infection and the treatment was continued. By the 9th day, skin lesions had evolved into deep ulcers with central necrotic eschar and surrounding hyperemia. They were widespread but more on the gluteal region and posterior aspect of the thighs (Figure 1). 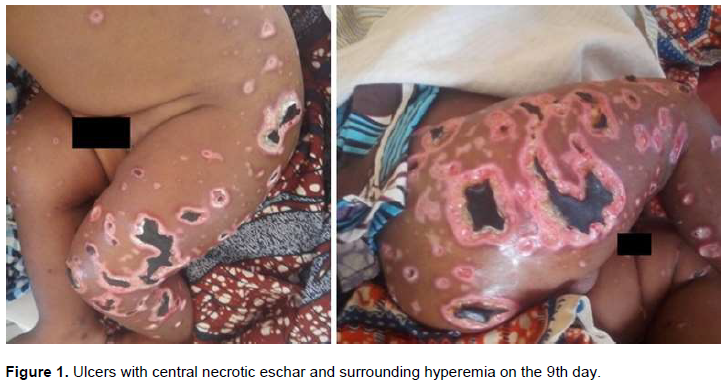 At this point, ecthyma gangrenosum was considered. Blood culture sampled earlier was negative for growth of organisms. As the initial wound swab M/C/S was negative, a repeat swab culture of the lesion was done, which yielded E. coli. This was sensitive to sensitive to Ofloxacin+++, Neticillin+++, Genticin+++, Cotrimoxazole+++, and Ceftriazone+. Antibiotics were changed to I.V Ciprofloxacin and Gentamycin based on sensitivity result. The necrotic eschars were debrided following review by the plastic surgeon and dermatologist resulting to deeper, more extensive lesions with bleeding raw areas (Figure 2). Daily wound care was initially with diluted hydrogen peroxide, normal saline and honey-soaked gauze until the wound became clean, thereafter it was continued with normal saline and honey-soaked gauze. By the 24th day on admission, the lesions were healing satisfactorily with multiple areas of epithelialization (Figure 3). He was discharged on the 27th day of admission but maintained on alternate day dressing and oral antibiotics. On subsequent follow up visit 2 weeks later, ulcers had completely healed though with dyschromic scarring. 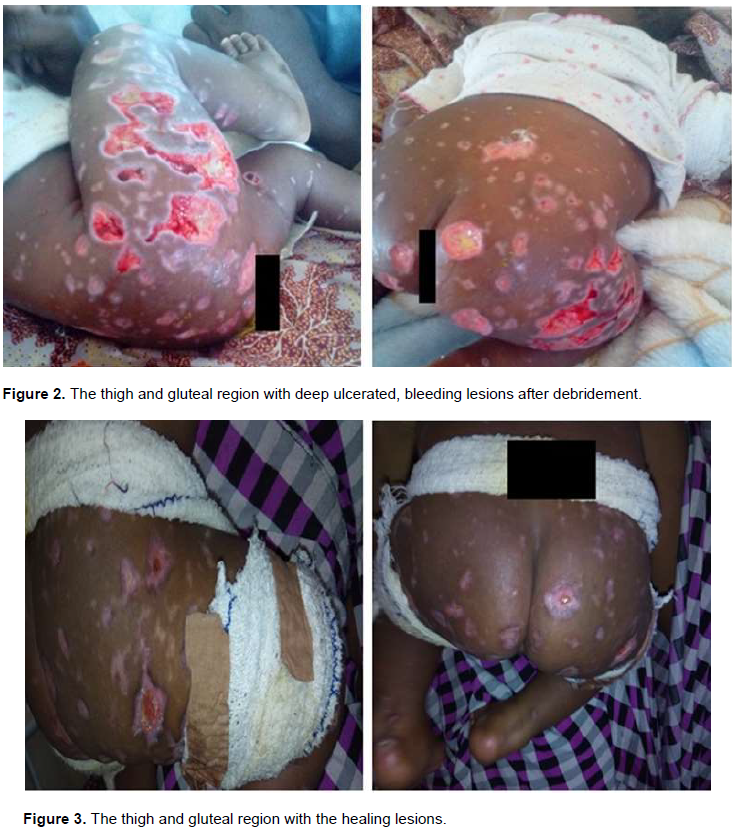 Ecthyma gangrenosum starts as small papules or vesicles that may be purpuric and rapidly progress to necrotic ulcers with surrounding erythema (Weiel et al., 2013). The offending organisms invade the media and adventitia of subcutaneous blood vessels, causing haemorrhagic vasculitis leading to poor skin perfusion and central necrosis presenting as a black eschar (Weiel et al., 2013). It commonly affects the lower extremities, particularly the gluteal and genital areas (Elmariah et al., 2007). This is the pattern of presentation seen in our patient. Although, typically associated with Pseudomonas  aeruginosa, some reports have indicated E. coli as a causative organism with a report suggesting probable co-infection by the 2 organisms(Pathak et al., 2013; Abbas et al. 2017). Staphylococcus aureus, including methicillin resistant S. aureus (MRSA) has also been reported as a cause of EG even in previously healthy children (Pechter et al., 2012; Song et al., 2015).

In this index case, Pseudomonas was not cultured even  though  it  is  the  commonest  organism   causative agent with EG. The organism isolated from CSF was S. aureus, and E. coli later cultured from the lesions could have been a later co-infection since the child was having diarrhoea and the skin integrity was breached possibly giving way for E. coli from stool to infect the exposed tissues. A case of EG was also reported where results of initial blood culture yielded E. coli, while a later sample grew P. aeruginosa supporting  the need to repeat tests if there is no clinical response (Abbas et al., 2017). This patient was initially thought to have meningococcemia as the initial rashes were petechial. There was also an outbreak of meningitis in the town which was evolving at

that time as other cases of suspected meningitis were on admission. Therefore, another possibility is that these skin lesions were meningococcal and later evolved to EG. Neisseria meningitidis has not been reported in the literature among several organisms known to cause EG (Narayanan et al., 2013). Other causative agents of EG include (but are not limited to) bacteria such as E. coli, Proteus species, Klebsiella pneumoniae, and MRSA.

This case of EG was seen in a previously healthy male infant with no evidence of immunosuppression. Although EG, is commonly associated with reduced immunity in many reported cases either from immunodeficiency, malignancy or malnutrition, it has also been found in healthy children without any of these risk factors (Biscaye et al., 2017). In a retrospective analysis in Mexico,  authors reported eight cases of EG in previously healthy children, although the lesions were not as extensive as the index case (Martínez-Longoria et al., 2017). Other cases have also been reported in neonates and infants who were previously healthy; hence suggesting that children at this extreme of age have not developed significant acquired immunity (Chan et al., 2006; Bakalli et al., 2010; Chang et al., 2012; Biddeci et al., 2015). Even though, EG has not been reported to have any gender predilection, a 15 year retrospective review of cases of childhood Pseudomonas sepsis (not limited to EG), found males infants predominated (Huang et al., 2002). Evolution of the illness shows that prior to the onset of typical rashes, the patient might have fever and diarrhoea (Dovemed Editorial Board, 2017)which was also typically how our patient presented. This may be a form  of  parenteral  diarrhoea  from  toxic  effect   of   the bacteria. In Albania, a similar case of an infant with EG and concomitant  meningitis as observed in the index case was reported, however, the aetiologic agent isolated from blood and CSF was P. aeruginosa and the wound culture was negative (Bakalli et al., 2010). Another case similar to ours of an infant in whom meningococcemia was suspected and was commenced on Penicillin without response before P. aeruginosa was isolated has also been reported (Reymond et al., 1996).

The index patient had neutrophil predominance as opposed to the usual neutropenia associated with Pseudomonas EG. Some other case reports in children have also shown neutrophilia rather than neutropenia and this may be explained by their relatively good immunity (Martínez-Longoria et al., 2017). Though it has not been shown that other organisms causing EG are more associated with neutrophilia, an author, who studied about 43 cases of Pseudomonas septicaemia showed that leukopenia influenced the outcome as 90% of the fatalities had leukopenia (Huang et al., 2002). Another factor influencing prognosis is early recognition of the problem and early initiation of antibiotics based on sensitivity. The delay in recognition of the skin lesions in this index case as EG was because they were assumed to be meningococcal. This emphasizes the need for higher index of suspicion in our setting as many cases may have been missed. It is of note that most reports of EG emanate from the developed world. Another factor in the delay was the cultured S. aureus, which is not a common cause of meningitis, was thought to be a contaminant   infection   especially    with    the    ongoing meningitis outbreak as Sokoto, Nigeria is within the meningitis belt (MenAfriCar, 2013). Indeed, S. aureus is reported to be a cause of meningitis in infants who have defects communicating with intracranial cavity, are immunocompromised or are malnourished (Ataee et al.,2011). Our patient did not have any of these risks except being an infant from a low socioeconomic status.

In conclusion, EG is a skin lesion that may be suspected when a typical appearance of the lesion is developed even if the patient is immunocompetent and cultured organism is not Pseudomonas.