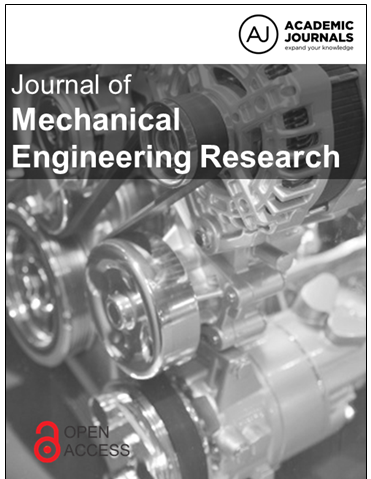 Project feasibility gave rise to the need for simulation. Simulation of a project leads to reduction in production cost, which ensures the success of the proposed project. Also, it provides initial design data for the experimental project. Thus, the design analysis and variables used for project simulation must be designed properly, revised, tested, and re-tested to guarantee how accurate the experimental design is. Hence, solar adsorption refrigeration system was designed, simulated and constructed using zeolite 4A/13X blend and water. The models were simulated using TRNSYS 16.0 simulation tool. From the result, it was observed that the collector area increases with increase in the system COP from month to month. The highest system COP of 1.53 was obtained in the month of April while the least was 0.4 for July due to frequent rainfall. Also, a much high COP was obtained for dry season while lower COP was gotten for harmattan season.

Due to shortage of power from the national power grid in urban cities and inability to connect some rural areas to the grid (Oyedepo, 2012), refrigeration is achieved in homes and other centres such as health care  centre  etc. using alternative sources mostly powered by fossil fuel. The use of energy generated from fossil fuel for refrigeration could lead to depletion of ozone layer and cause climatic  change. To address  this setback, there is need to generate power from non-fossil fuel sources such as solar energy which is one of the most attractive non-fossil energy sources for refrigeration. Absorption cooling systems are otherwise used due to its reliability and low-grade thermal energy (Hassan and Mohamad, 2012). The major advantage of absorption cooling system is the higher coefficient of performance (COP) when compared with other refrigeration cycle. The main challenge is the unnecessary auxiliary energy consumption and other energy losses (Nienborg et al., 2017).

Various system control and configurations schemes are being studied for system performance optimization with the aim of increasing energy saving. With the introduction of simulation tools like modelica and TRNSYS, complex system can be studied over a long period of time (Khan et al., 2018) and expensive experimental set up can therefore be minimized. Simulation software, TRNSYS 16.0, is mostly used to initiate real time situation of solar insolation (amount of solar radiation over a specified time) on solar harvesters (process of capturing and storing solar energy). For full control of whole simulation, it is necessary to design carefully the proformas from the scratch. There is need to write a mathematical model for the proformas using programming language like FORTRAN/C++. However, simulation analysis may not replicate the exact operating condition. Therefore, it is important to stimulate the components to predict the trend of the expected results. Over the years, TRNSYS has been used by many for simulating and modeling the dynamic performance of solar cooling system which is difficult to estimate during the planning phase.

In this study, solar adsorption refrigeration system was designed, simulated and constructed using zeolite 4A/13x blend and water, and the model part of the system were simulated using TRNSYS 16.0 simulation tool. The design and creation of the models/components followed a definite path from the design of the CPC, to the adsorbers, valve connections, condenser and the evaporator/cold box. A FORTRAN / C++ programming language was developed and used in the TRNSYS simulating applications in order to complete the design of the models which is the first part of the simulation design. The second part of the simulation involved the creation of new component / proforma’s for the various component parts of the refrigeration system using TRNSYS, 2018.

On the creation and programming of the proformas in TRNSYS 16 for the simulation of solar powered adsorption continuous refrigeration system, the following methods were used (TRNSYS, 2007a, b, c);

1. The design of proforma using TRNSYS 16.0 based on mathematical model.

2. Declaration of assignment and variable (derivative input, and output) as shown in Appendix B.

In modelling solar adsorption refrigeration system, the following assumptions were adopted and they cater for the transfer functions (Omisanya et al., 2013).

1. There is uniform pressure inside the adsorber bed.

2. There is no mass transfer in the adsorber during the isosteric stage of pre-heating and cooling.

3. Outer zeolite surface is always assumed to be in adsorption equilibrium.

4. Adsorbent / adsorbate density, thermal conductivity and specific capacity are each constant in the temperature range used.

5. There is a steady state flow.

6. Changes in kinetic and potential energy at input and output are negligible.

7. The adsorption and desorption processes are each isobaric (constant pressure).

9. All phases are continuous in thermal, mechanical and chemical equilibrium.

10. Adsorber bed temperature is uniform (there are no temperature gradient at any given time).

11. The vapour temperature is uniform along the pipe duct.

12. Collector output temperature is in equilibrium with the adsorber bed temperature.

The thermal performance component model of a CPC collector provides the theoretical framework of a compound parabolic concentrator (CPC). Its nomenclature is as shown in Table 1.

The compound parabolic concentrating (CPC) collectors consist of absorber tube and concentrating reflector. The parabola focus coincides with the absorber intersection. The CPC collects both diffuse radiation and beam coming from the sun. The CPC profile was modeled according to Umair et al. (2014).

This component models the concentric design of the bed within the absorber pipe it provides for the theoretical analysis of the absorber as shown in Appendix A. For evaluating the thermal performance and mass transfer in the absorber profile, the proforma was modelled according to Umair et al. (2014) and Acuna et al. (2016). Its nomenclature is as shown in Table 2.

Within the CPC absorber is a concentric layer of pipe in which the adsorption and desorption bed is located. The design provides for the means to charge the bed with zeolite and water. As the temperature of the absorber increases, the heat travels inward to the bed, driving the system to steam up. Vapor produced travels through the annulus of the absorber to the condenser. For the concentricity of the absorber, Acuna et al. (2016) was used to model the beds while the absorber and CPC profile was modelled according to Umair et al. (2014).

The component models the cooling performance of a cold box. It provides the theoretical analysis of an evaporator in respect to changes in temperature and pressure. For evaluating the cooling of the evaporator performance, the cold box profile was modeled based on the equation by Umair et al. (2014) and Ityona (2008). Its nomenclature is as shown in Table 3.

An evaporator consists of a pipe separated from the condenser by a throttle valve. The constriction by the valve creates a change in the pressure and thus the temperature of the evaporator. This will cause the heat within the cold box to be sucked up, thus leaving the cold volume cooler. The mathematical models by Umair et al. (2014) were used in the simulation to show the total mass of water absorbed in the receiver bed, evaporator energy, specific cooling power, evaporator temperature, coefficient of performance, absorbed mass of water per instance and change in formation of ice. 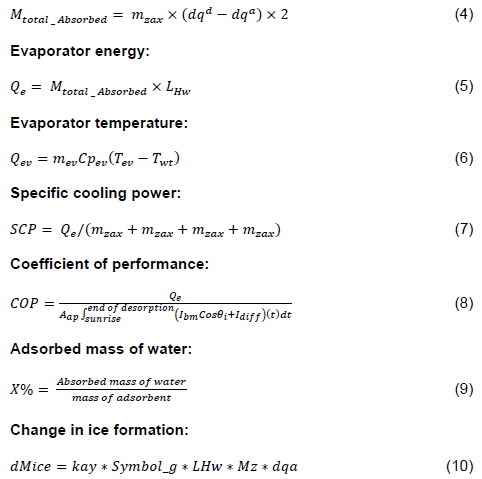 A condenser consists of a pipe connected to the absorber, and wound parallel to each other with fins cutting across the rounds. The fins are to aid in quick exchange of heat as the fluid travels to the evaporator. The mathematical models used for the  modeling  of the condenser is that according to TRNSYS Mathematical Reference (2007)

Based on these models, a studio was developed in TRNSYS to simulate the proposed refrigeration system presented on Figure 1. 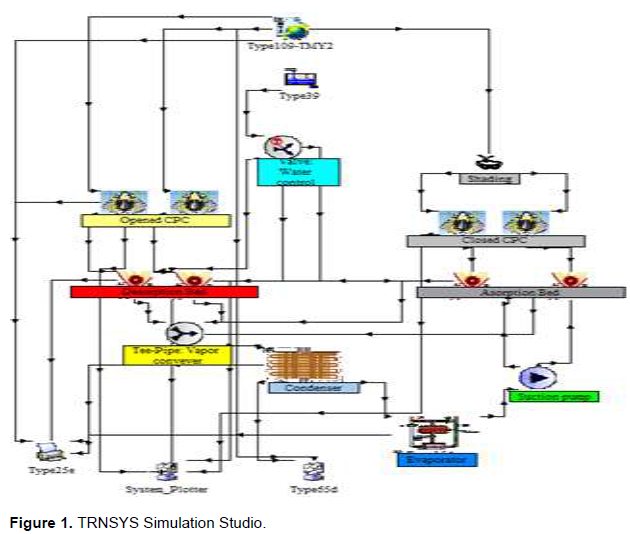 Figure 2 presents a comparison of collector area and COP from January to December of a metrological year. The optimized results of the designed continuous solar adsorption refrigeration system, taking into consideration the parametric study of aperture area and system COP is shown as follows in Figure 2. 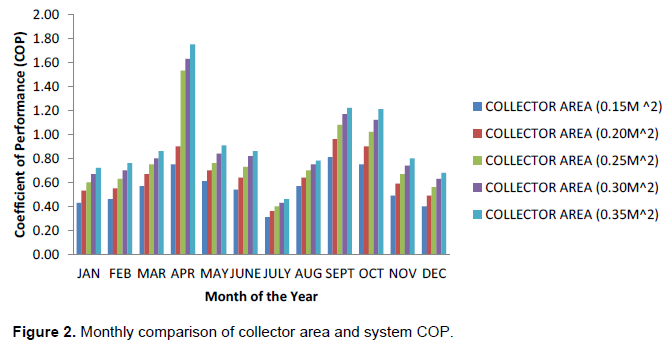 The chart in Figure 2 from optimization showed that as the collector area increased there was a corresponding increase  in  the  system  COP  from month to month with the month of April having the highest system COP of 1.53 and the month of July  having  the  least  system  COP  of 0.4. April had the highest system COP as shown in Figure  2   since   the   month   gave    the   highest   solar insolation in Zaria while July had the lowest system COP given the least insolation due to the fact that the rains is at its peak. It was also observed that during the dry season of February to April there was a corresponding rise in system COP owing to high solar insolation at that time and from November to December. There was a corresponding decrease in system COP due to harmattan season. Also, there was a sudden rise in system COP in the month of September and October after the rains have rescinded; this was expected due to the fact that the two months following the rainy season use to witness high solar insolation before the commencement of harmattan.