Assessment of antimicrobial susceptibility testing techniques in some laboratories in Cameroon

A limited number of methods for antimicrobial susceptibility testing (AST) of medically important microorganisms have survived the maturation of modern diagnostic clinical microbiology (Van Belkum and Dunne, 2013). Antimicrobial susceptibility testing is a technique used  to   measure  the  ability  of  an  antibiotic  to  inhibit bacterial growth in vivo. This technique is universal and should not undergo any changes except updates There are few activities in the clinical microbiology laboratory that utilize more technologist time and laboratory resources than AST. It has been suggested that, at least in terms of direct relevance  to  the  care of  patients  withinfection, AST may be the single most important activity performed in the clinical microbiology laboratory. AST results are often used to dictate specific management for individual patients, summary AST data is used to drive empiric antimicrobial therapy, and, finally, formulary decisions in some cases are made based on AST results from the laboratory. (Doern, 2011).  The interpretative reading of the susceptibility testing has many parameters which must be taken into consideration before prescribing an antibiotic. With the growing increase in bacteria resistance to antimicrobial agents, susceptibility testing has become an indispensable tool in the judicious choice of antibiotics (Genne and Hans, 2003). There is natural resistance and acquired resistance to antibiotics, for example Escherichia coli is naturally resistant to penicillin while ampicillin resistance can be acquired.

During a period of six months we carried out a cross-sectional study during which we enrolled Public health institutions and Private laboratories by a non-probabilistic technic. After the identification of the target laboratories, we asked for their consents; then during a period of one week per laboratory, we observed every single steps of the realization of the antimicrobial susceptibility testing. Finally we compared our results to those required by the standard.

This cross-sectional survey was carried out at thirteen laboratories. These centers are located in 08 regions of Cameroon, and receive a large number of specimens from patients living in surrounding towns. Public and private medical laboratories which carry out antimicrobial susceptibility testing and agreed to participate were included in the study. Each laboratory was assigned a code for privacy reasons. For quality control purpose, our collection tools were based on the standards currently used.  All the procedures used in this study were in reference to the current revision of the Helsinki Declaration.

An authorization to carry out this research was provided by the laboratory Heads. The survey protocol was approved by the Cameroon National Ethics Committee (Reference number: 2014/03/434/L/CNERSH/SP).

At enrollment, standardized data collection forms were filled, including identification of each laboratory, the procedure for acquisition, transport and storage of materials, quality  controls  and the qualifications of the laboratory personnel.

After obtaining an authorization from the administration, data were collected through an observation sheet. Information on the techniques used for the antimicrobial susceptibility testing from media preparation to the interpretation of the crude results were  also collected and their practices compared to those of the standards.

Our collection tools were based on the standards currently used in other countries and those used in the laboratories in Cameroon. The standards mostly found were those of the « Comite de l’Antibiogramme de la Societe Francaise de Microbiologie », CA-SFM (2013) and of the Clinical and Laboratory Standards Institute (CLSI, 2010).

Data analysis was done using CSPRO 4.1. Quantitative variables were expressed as mean ± standard deviation, and categorical variables as percentages. Descriptive analysis tools were used including those of the univariate descriptive statistics.

Characteristics of the laboratories

Appreciation of the culture media utilization

All the laboratories used 90 mm diameter Petri dishes. Only 2 laboratories used square Petri dishes. The media were on average 4.5 mm thick and they  were  stored in a refrigerator after preparation  at an average temperature of 7.8°C. The duration of storage time varied from 02 weeks to 02 months with a mean of 03 weeks. Generally, the preservation of dehydrated MH medium was satisfactory. However, additives such as blood, multivitamin supplement was not always in the prescribed concentrations. The media were not dried before use in 10 laboratories.

We have also evaluated the storage and use of antibiotics discs. The discs were kept at an average temperature of 8.9°C (the ones in use and the stock). Only 2/13 laboratories kept their discs in closed containers with desiccants. In addition, 3/13 laboratories were using expired discs. Three quarters of laboratories (76.9%) did not have a Mc Farland standard. In one case, the Mc Farland was available but not used while in another the Mc Farland was used but not as recommended by the standards. We found only the 0.5 McFarland standard.

Appreciation of the general procedure

The flooding technique was the most commonly used.  The colonies used were pure in most laboratories, however, only one laboratory used the densitometer to standardize their inoculum (Table 3). 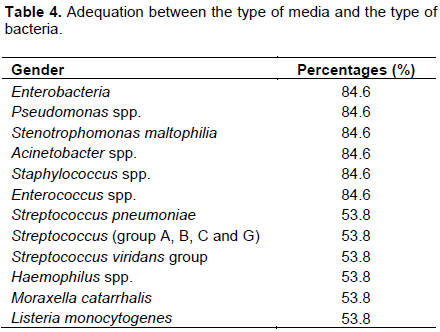 The number of discs placed on the agar varied between 5 and 14, with an average of 08 discs per Petri dish of 90 mm diameter (Table 5). The plates were incubated for 24 h at a temperature of 37 ± 1°C and fastidious bacteria were incubated in a CO2-enriched environment using a lit candle in a jar. The reading of the incubated Petri dishes was visual for 11 laboratories (Table 6). 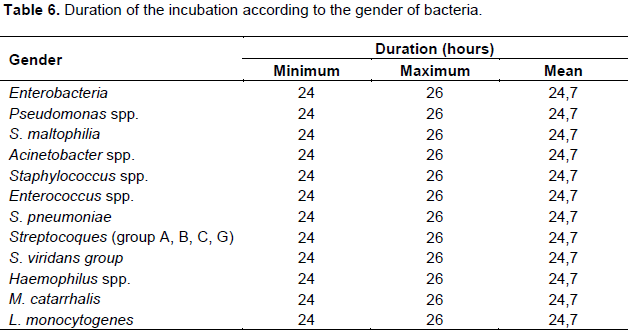 Interpretation of the results

For all the laboratories, the reading of the inhibition zones were made â€‹â€‹on the back of the agar but not on a black background as recommended by the standards of the  European Committee on Antimicrobial Susceptibility Testing (EUCAST)  (Table 7). Over 53.8%  of laboratories estimated the diameters of the inhibition zones with the naked eye while 46.2% used a ruler and/or calipers. Interpretative reading was not done by 12 of the laboratories. The standard reference most mentioned by the laboratory staff was the “CA-SFM”. Only 30.8% of laboratories used CA-SFM to categorize strains as sensitive (S), resistant (R) or intermediate (I). The other laboratories used  the  antibiotics manufacturer’s manuel written according to the CLSI standards.

Concerning the results issued, all laboratories mentionned the identified bacteria, the isolates were caterorized sensitive, resistant or intermediate according to their reaction to the different antibiotics tested. However, the method used, the manufacturer of media or discs, and the origin of the critical points were not included on the results.

Quality control of the procedure

In 84.61% of the laboratory, the antimicrobial susceptibility testing was not done according to the standards nor were they updated. This is contrary to the review of Patel in 2012 who suggests standard reference methods should be used  for  identification  so  that  the  subject bacteria are  consistently   and  correctly  identified  to   the  genus  and/or species  level. It could be due to either ignorance of the existance of references, or the difficulty to obtain these controls that need to be paid for.

All the media used for susceptibility testing were homemade, but the type of media was not suitable with the type of bacteria in 11/13 of the laboratories. This is different from a study suggesting that the  composition  and preparation  of  the  agar  and  broth  media  used should  be  determined,  optimised,  and documented  in  a  detailed  standard  operating procedure (Patel, 2012). This shows that their choice was not based on the reference committee on susceptibility testing guidelines.

The storage temperature of the plates was generally respected, while their conservation, the thickness of the agar and the number of discs per petrie dish were not adequate; It is different from a review proposing that growth  and  incubation conditions  (time,  temperature,  atmosphere e.g. CO2), agar depth, number of concentrations  tested  per  broth  and  agar dilution should  be  determined,  optimised,  and  documented   in  a  detailed  standard  operating procedure (Patel, 2012).  This could be explained by the fact that some of these laboratories do not follow the expert rules proposed by the standards..

Only 03 laboratories had a McFarland standard. In one of them the Mc Farland was available but not used and in the other two the use of this standard was not corect. This does not meet the requierements of the review of Patel in 2012 suggesting that the  optimum concentration of the inocula must be determined to obtain accurate susceptibility results. This can be explained by the ignorance of the technicians concerning the standards

Eleven laboratories used the flooding technique for economy reasons. Most often, the users of this method did not bother to dry the agar before placing the discs. This was contrary to the “EUCAST” practice, which advises avoiding sub-inoculated agar. We found out that 16.7% of laboratories did not use any of the recommended techniques, but added a colony directly on the agar using a swab.

The temperature and especially the incubation period was not met. References recommended minimum 16 h and maximum  20 to 24 h (EUCAST, 2015,  CA-SFM, 2013). Also, these standards recommend a temperature of 35 ± 1°C. This could be due to the fact that this duration  was  not actually measured but most of the time it is estimated .

Interpretive reading was not done by 12 of the laboratories This was contrary to the work of Leclercq et al. (2013) also Reller et al. (2009) who said the results of a susceptibility test must be interpreted by the laboratory prior to communicating a report to a patient’s physician. This coud be explained by the fact that the biologists are not in charge of only one bench and therefore have too much work.

In regards to the result sheet there were no mention of the method used, type of media or discs, nor the origin of the critical points. Quality control of media prepared was limited to sterility testing. This does not meet the requirements of the WHO and EUCAST that recommend checking the pH, the concentration of divalent cations, thymine and of thymidine, however it is always recommended to do a fertility test and / or specificity. The notion of reference strains is still not well understood in our laboratories; which explains why internal and external quality controls were not done regularly in ten of the laboratories.

These results suggest that most laboratories do not have a standard of antimicrobial susceptibility testing, and whenever they have one, they do not strictly comply with the guidelines. Moreover, the importance of the strict and correct execution of susceptibility testing procedure has not been well integrated by the technicians. Interpretative reading of the antibiogram should be learned by the head of laboratories in order to bring out the different phenotypes.

There is no conflict of interest regarding any of the authors.