The relationships between estrogen and cognitive functions have been explored in many experimental and observational studies with rather inconsistent outcomes. This study explored the relationship between hormone replacement therapy (estrogen-based) and Alzheimer's disease in postmenopausal women based on existing literature. A comprehensive search was conducted for relevant articles written in English language from 1990. PubMed, Medline search, Science direct and SCOPUS databases with keywords such as: 'Alzheimer's disease', 'hormone replacement therapy', 'pathogenesis of AD', 'epidemiology of AD in older women', 'biological role of oestrogen in neuroprotection', 'menopause and hormonal changes', and 'effects of HRT on cognitive functioning' were used for the search. The search strategy was based on Cochrane review recommendations and the relative risk was used to indicate the degree of relationship. A total of 898 citations were initially identified, of which 15 met the inclusion criteria for this study. Ten of the fifteen articles revealed that Estrogen Replacement Therapy (ERT) has a protective effect against Alzheimer's Disease (AD) in postmenopausal women with relative risks ranging from 0.28 - 0.95 (95% C.I. = 0.08 - 0.99), while the remaining five studies showed increased risk of AD in postmenopausal women exposed to ERT with relative risks ranging from 1.10 to 2.10 (95% C.I. = 0.60 - 3.50). Conclusively, longstanding commencement of HRT prior to the onset of menopause might be protective against the development of Alzheimer's disease on empirical basis, but does not seem to have any therapeutic value after the onset of the disease.
Key words: Alzheimer's disease, hormone replacement therapy, oestrogen and neuroprotection.

Alzheimer’s disease (AD) is a progressive and irreversible neurodegenerative disease characterized clinically by insidious onset of memory and cognitive impairment, emergence of psychiatric symptoms and behavioural disorder, and impairment of activities of daily living (Honq-Qi et al., 2012). Apart from the deterioration of memory, Alzheimer's disease is also characterized by histopathological changes which include extracellular deposits of amyloid-β (A-β) peptides forming senile plaques, and the intracellular neurofibrillary tangles (NFT) of hyperphosphorylated tau in the brain which are commonly regarded as hallmarks of the disease (Dong et al., 2012). Globally, it accounts for about 50 to 60% of all dementia cases (Janicki and Schupf, 2010). There are over 46 million people currently living with dementia worldwide and 58% of this figure reside in the low and middle income countries of world, and the number is estimated to increase to over 131.5 million people by 2050 (Baiyewu, 2003; Hall et al., 2009; World Alzheimer Report, 2015). With increasing life expectancy globally, the number of people of living with the disease will astronomically increase, since advanced age is one of the most consistent and important risk factors. It is a disease of the aged with increased risk among postmenopausal women than their male counterparts (Plassman et al., 2007; Jamshed et al., 2014). Outcomes of various studies revealed that women are disproportionately affected and carry a significantly higher risk than men (Craig and Murphy, 2009; Hebert et al., 2013; Mielke et al., 2014; Gabelli and Codemo, 2015; Alzheimer's Association, 2016). Though longevity has been adduced as one of the reasons, the significantly higher risk of developing Alzheimer's disease in postmenopausal women exceeds the risk accounted for by their greater life expectancy (Andersen et al., 1999).
Thus, menopausal oestrogen withdrawal might be the most tenable explanation for the increased prevalence of Alzheimer's disease among women (Molsa et al., 1982; Epperson et al., 2013; Henderson et al., 2016). A meta-analysis of 7 sex-specific studies of the incidence rates of Alzheimer's disease concluded that AD is 1.5 times more likely to develop in women than men (Gao et al., 1998). More recent studies by Hebert et al. (2013), Mielke et al. (2014), Jamshed et al. (2014), Gabelli and Codemo (2015) and Henderson et al. (2016) all confirmed that Alzheimer's disease is 1.5 times to twice commoner in postmenopausal women than men. Decreased oestrogen level might, therefore, be a risk factor for AD in postmenopausal women (Paganini-Hill and Henderson, 1994; Fillit and Luine, 1985; Fillit, 2002). To further buttress the role of oestrogen, postmenopausal women with AD tend to have lower levels of endogenous estrogen when compared to their counterparts without it (Jamshed et al., 2014). The positive cognitive effects of oestrogen are achieved in interrelated fashion via:
(1) Enhancement of the cholinergic system by stimulating Choline Acetyltransferase (ChAT) activity thereby increasing the synthesis of Acetylcholine and by raising the concentration of hypothalamic nicotinic Ach receptors
(Morley et al., 1983; Luine, 1985; Toran-Allerand et al.,1992),
(2) Neuroprotection against excitotoxins and has antioxidant effects which protects the neurones from oxidative stress and free radical damage (Behl et al., 1995; Goodman et al., 1996; McEwen, 1999: Grodstein, 2017).
(3) Influencing the glutamate system, a second neurotransmitter involved in learning and memory, via the expression of proteins of the NMDA receptors that are involved in glutamate activation and the enhancement of long-term potentiation (Gazzaley et al., 1996; Grodstein, 2017).
(4) Promotion of the non-amyloidogenic metabolism of the amyloid precursor protein through increasing the activity of amyloid-β degrading enzymes (ADE) by enhanced activity of Neprilysin (NEP-1 and NEP-2) enzymes (Jaffe et al., 1994; Xiao et al., 2009; Liang et al., 2010; Yoon and Jo, 2012)
(5) Increasing cerebral glucose transportation and regional blood flow which are all decreased in AD (Bishop and Simpkins, 1985; Ohkura et al., 1995; Resnick et al., 1998; Maki and Resnick, 2000).
The currently available treatments namely; the acetylcholinesterase inhibitors and the N-Methyl-D-Aspartate antagonists exert minimal impacts on the disease as they only decelerate the progression of the disease while only providing symptomatic relieve without definitive cure (Wenk et al., 2006; De Felice et al., 2007; Olivares et al., 2012; Mehta et al., 2012; Bond et al., 2012; Colovic et al., 2013; Lakhan et al., 2013; Zemek et al., 2014; Hogan, 2014; Bishara et al., 2015). Despite the demonstrable neuroprotective and neurotrophic effects of estrogen, the outcomes of hormone replacement therapy (HRT), using either oestrogen alone or in combination with progesterone, were equivocal. The three largest clinical trials to date on the effect of HRT on memory and cognition among older women; the Women's Health Initiative Memory Study (WHIMS), the Cache County study and the Kronos Early Estrogen Prevention Study (KEEPS), though with some methodological differences, revealed variable outcomes (Zandi et al., 2002; Maki and Henderson, 2012: Gleason et al., 2015). There is a very large body of literature on this important subject matter particularly at the turn of this millennium. There is also the compelling need to seek for other modalities of treatment for Alzheimer's disease apart from the currently available ones. This study, therefore, attempts to explore the relationship between Alzheimer's disease and hormone replacement therapy in older women based on available and accessible recent literature.

Search strategy
A comprehensive search was conducted for relevant articles published from 1990, with the final date of the search being 17th April, 2017. This period was chosen in order to cover at least three decades of research and to notice any variation therein. Databases searched were PubMed, MEDLINE, Science Direct and Scopus and other Cochrane Library Databases. The search terms used were 'hormone replacement therapy', 'Alzheimer's disease', 'epidemiology of Alzheimer's disease in older women', 'effects of hormone replacement therapy on cognitive functioning', 'menopause and hormonal changes' and 'hormone replacement therapy and incidence of Alzheimer's disease'. The reference lists of identified papers were also searched for further reference source articles. The search strategy was based on Cochrane review recommendations (Higgins and Green, 2011).
Inclusion and exclusion criteria
For any study to be considered for this study, it must meet the following eligibility criteria:
(1) Must be a case-control or cohort study
(2) Must have reported an association between hormone replacement therapy and Alzheimer's disease in the form of relative risk; and
(3) Must have been published in English Language or if published in other language(s), must English translation.
The exclusion criteria were:
(1) Unclear methodology
(2) Studies with small sample size; and
(3) Studies without cognitive endpoints.
Data extraction
The first two investigators, AWI and OAS, independently searched and selected relevant literatures based on the search terms. The third investigator, IAM, extracted the data while disagreements were jointly discussed with the fourth investigator, BKM, who served as an arbiter. The extracted data included; the first author, the year of publication, the study type, and the association between Alzheimer's disease and hormone therapy as indicated by the relative risk (RR). For the purpose of interpreting the associations, relative risk of >1 indicates increased risk, while, relative risk of < 1 confers protection against Alzheimer's disease with estrogen replacement therapy.
Ethical approval
This article is a systematic review of the effects of hormone replacement therapy on Alzheimer's Dementia, therefore, Ethics committee approval was not required.

Figure 1 summarises the search process conducted. Electronic literature searches originally identified a total of 898 citations comprising of: PubMed (n=217), Medline (n=258), Science Direct (n=92) and, Scopus (n= 331). After accounting for duplicates, a total of 196 papers were excluded while 702 remained. Additional 679 citations were rejected when their titles and abstracts were reviewed and found not to be relevant to the index study. Some of the reasons for the rejection included: referring to other forms of hormone therapy such as testosterone and growth hormone therapy, treatment for postmenopausal osteoporosis or cancer chemotherapy. The full texts of the remaining 23 publications were examined and 8 articles were further excluded. The reasons for their exclusion were: lack of cognitive endpoints (n= 5) and, unclear methodology (n=3). Finally, fifteen (15) articles met the inclusion criteria and were included in this study. 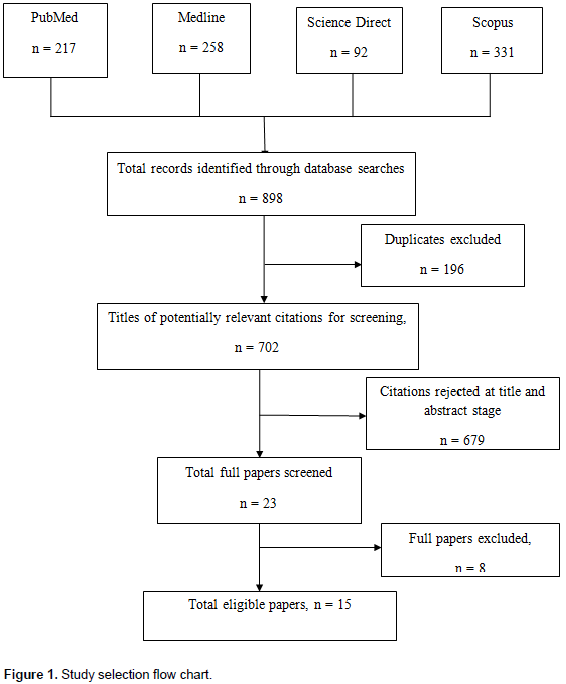 Summary of study outcomes
Table 1 summarises the key findings of the included studies; the association between hormone replacement therapy and the risk for developing Alzheimer's disease, the relative risks, the type of study and the references. Ten of the studies were conducted in United States and 5 from Europe. The European ones included studies from the United Kingdom, Finland, Italy and the Netherlands. It must be observed that no study from Africa or Asia met the criteria for inclusion of this research. 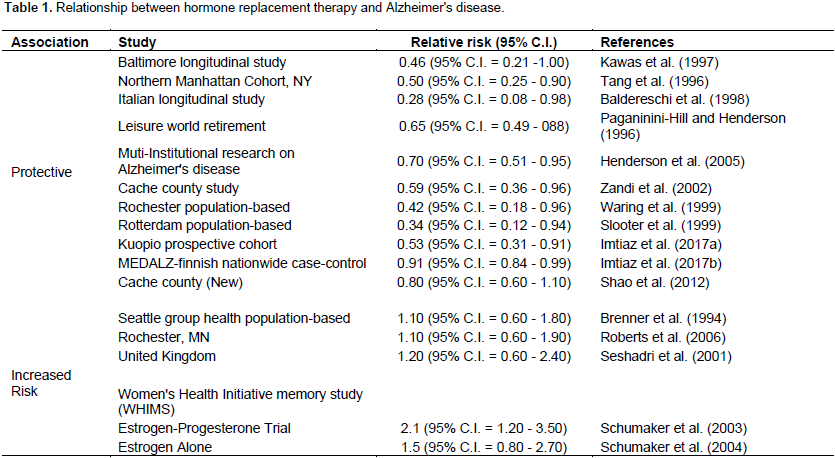 Despite the seeming protective role of HRT against Alzheimer's disease and other forms of cognitive impairment based on theoretical perspectives and observational studies, the findings have been inconsistent. After synthesizing many literature and highlighting the findings of the Women's Health Initiative Memory Study (WHIMS), McCarrey and Resnick (2015) inferred that although observational studies suggested that HRT would benefit cognitive function and reduce the incidence of cognitive impairment, including dementia, the results of the WHIMS randomized controlled trials in postmenopausal women did not support the observational findings and even showed poorer cognitive outcomes in women randomized to HRT (McCarrey and Resnick, 2015). Similarly, in a comprehensive review of more than 200 published works, Barrett-Connor and Laughlin (2009), concluded that there is no evidence that convincingly supports the prescription of early or late postmenopausal estrogen therapy to preserve cognitive function or prevent dementia (Barrett-Connor and Laughlin, 2009). It could, however, be concluded on empirical basis that longstanding commencement of HRT prior to the onset of menopause might be protective against the development of Alzheimer's disease but does not seem to have any therapeutic value after the onset of the disease at menopause.