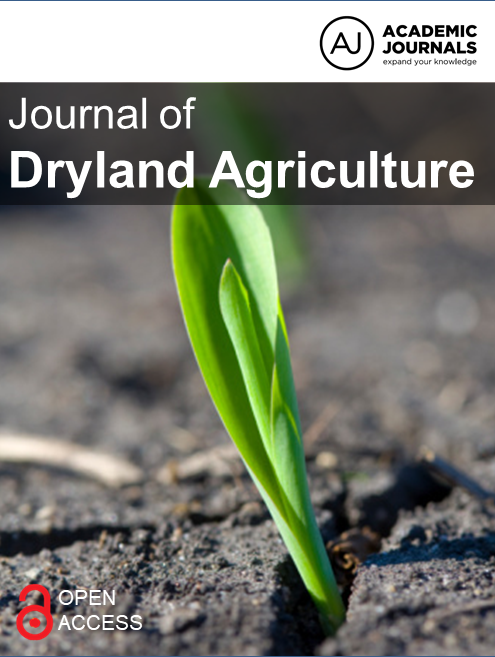 The objective of this study was to determine the effect of water stress on phenology
and identify drought resistance mechanism in bread wheat and also to find out the
most crucial stage of growth with respect to water stress in wheat variety. The
experimental materials consisted of and two bread wheat varieties (Star 11 TR
77173/SLM and Kauz/Weaver). Water stress was imposed at three critical growth
stages by withholding water at (tillering, flowering, grain filling stages, there was
also the control with no water stress treatments. The experiment was laid out in a
split plot design with three replications. Water stress was allocated to the main plot,
while variety was assigned to the sub plot. The research was conducted during the
2009/10 and 2010/11 dry seasons at the Usmanu Danfodiyo University, teaching
and research Fadama farm, Sokoto in the Sudan Savanna ecological zone of
Nigeria (latitude 130011N; longitude 50151E and at an altitude of about 350 m above
sea level). Water stress at tillering resulted in significant (P<0.05) reduction in days
to 50% booting, heading and anthesis, Water stress at grain filling resulted to
significant reduction in grain filling duration and such limitation caused the
canopy to senesce prematurely, The variety Star II TR 77173/ SLM had shorter
days to booting, heading and anthesis than Kauz/Weaver. Star II TR 77173/ SLM
was better than Kauz/Weaver in its ability to complete its growth period and mature
before the drought stress appeared to exert its limiting effect. The phonological
stages of booting, heading, flowering and maturity were all influenced by water
stress/drought. Star II TR 77173/ SLM is recommended to this area and other areas
with similar climate due to its superiority over Kauz/Weaver through its ability to
complete its growth period and mature before the drought stress appears to exert its
limiting effect.
Key words: Water stress; variety; bread wheat; phenology; Sudan savannah