The interaction of malaria with malnutrition is complex. In areas where malnutrition among children is prevalent, management of malaria is not standardized. In Burkina Faso, malaria treatment is prescribed after positive malaria rapid diagnostic test (RDT) or thick blood smears confirmation regardless of the nutritional status of the child. The study aims to assess the performance of malaria RDT in acute malnourished children under five years of age. A descriptive cross-sectional study was carried out from June 1st to August 31th 2014 in the health district of Nanoro in Burkina Faso. The study involved the children less than 5 years of age who were admitted for acute malnutrition and tested for malaria using RDT. The diagnostic values were then assessed for their agreement with the gold standard of the World Health Organization (thick blood smears) using Cohen-Kappa coefficient. In total, RDT and thick blood smear results were obtained from 131 children (aged 1-59 months). RDT was positive in 87 tested children (66.4%), while the thick smear indicated that only 47 were infected by malaria (35.9%) and Cohen kappa coefficient was 0.44. The sensitivity, specificity, positive predictive value and negative predictive value of RDT for malaria compared to microscopy were respectively 100% (95% CI: 92.5 - 100), 52.4% (95% CI: 51.1 - 52.9), 54% (95% CI: 43 - 64.8), 100% (95% CI: 92.5 - 100). Their timeliness was 8 min (± 3.47 min). Using malaria RDT in acutely malnourished children results in high number of false positive.

Malnutrition is a pathological condition resulting from the deficiency, excess or imbalance in intake of one or more macronutrients and/or micronutrients. It compromises natural  immunity   leading   to   increased    susceptibility  to infections such as malaria (Caulfield et al., 2004). Malnutrition is a major public health problem (Food and Agricultural Organization, 2012).

In Burkina Faso, despite the public health importance of both malaria and malnutrition, there are no national data on their association and co-occurrence. A hospital-based study carried out in Kaya (Center North of Burkina Faso) in 2013 estimated that one fifth of the acutely malnourished children were affected by malaria (Ouedraogo et al., 2013). Since 2013, with the WHO recommendation on the use of RDT for malaria, new guidelines on the implementation of histidine-rich protein 2 (HRP2)-based RDT were adopted for all patients with fever living in localities where microscopy is not available regardless of their nutritional status (Ministère de la Sanè du Burkina Faso, Programme National de Lutte Contre le Paludisme, 2014). Results obtained by both tests, RDT and microscopy are not always consistent. RDT antigen-based tests can be positive for a certain period post-infection even if the infection has been treated and the parasite has been cleared (WHO/Roll Back Malaria, 2005). The antigen HRP2 remains in the bloodstream for up to five weeks, time by which the parasite has been cleared probably by treatment, that is, the microscopy would be negative.  The difference could be due to the cross-reactions with heterophile antibodies in the patient's plasma when using OptiMAL-IT (DiaMed Basel, Switzerland) as the RDT (Valea et al., 2009). From another hand, it has been shown that malaria infection can be detected by polymerase chain reaction (PCR) in samples negative for microscopy but positive by RDT (Berzosa et al., 2018; Fançony et al., 2013; Moody, 2002; Okell et al., 2009; Tham et al., 1999). The WHO strategy on the diagnosis of malaria in endemic areas in the community using RDT has been implemented with no evidence on its sensitivity and specificity in malnourished patients. We hypothesize that differences between the two tests RDT and microscopy will be exacerbated in these children. In the present analysis, we aimed at testing the diagnostic performance of HRP2 -RDT for malaria compared to microscopy in malnourished children.

This study was carried out between June 1st and August 31th 2014, which corresponded to the rainy season in the region by the Clinical Research Unit of Nanoro (CRUN). It included six health centers of the Nanoro Health District: four peripheral health centers (Godo, Séguédin, Soum and Nazoanga) and two health facilities in the city of Nanoro. Nanoro is located at 85 km from Ouagadougou, the capital city of Burkina Faso. It is an agricultural area which depends entirely on rainfall. Rainfall is capricious and insufficient. It varies between 450 and 700 mm per year (District Sanitaire de Nanoro). Malaria is hyper endemic in the area (Derra et al., 2012). The district has two centers for education and raising awareness regarding nutrition and hygiene in the community located in Nanoro and Nazoanga. The district has another center of rehabilitation and nutritional education (CRNE) for treatment of children with severe acute malnutrition.

Malaria RDT, SD Bioline Ag Pf / Pan (Standard Diagnosis, Korea) was used throughout this study in all sites. The test was performed according to the manufacturer instructions as follow. Trained nurses held the finger of the patient and cleaned it using the alcohol swab provided in the test kit. The fingertip is let to dry and then it is slightly pressed and pricked with a sterile lancet. A blood drop (5 μl) is collected using a capillary tube (included in the test kit) and deposited in the round hole (hole "S" of test cassette). Four drops of the buffer are added carefully in the square hole of the test cassette. The test is read after a waiting period of 5 to 10 min. The appearance of the band C only means the test is negative. When both the control band C and Pf line or the band C and the Pan line are visible, the test is positive. The test is invalid if the band C is not visible and is performed again following the same steps described above (WHO, 2018).

At the same time, in every eligible participant, a thick blood smear was also performed by the trained nurses who carried out the RDT test. The thick blood smear was dried immediately and then transported to the laboratory of the Clinical Research Unit of Nanoro for processing and microscopy. At the laboratory, the slides were dried, stained with  Giemsa  10%  in  water  (V/V)  (Gupta  and Singla, 2012) and read after 5 to 10 min by two experienced microscopists. In case of discrepancy of the two results, a third reading was done. The microscopists were not involved in performing the RDT, and were masked to the results of the RDT as well as to the clinical status (febrile or non-febrile) of the children. A number of microscopic fields corresponding to 200 White Blood Cells were read in the thick film. The parasite density was calculated (for Plasmodium falciparum only) in the conventional way according to the WHO criteria.

To our knowledge, there were no previous studies that assessed the performance of RDT compared to the gold standard “microscopy” in moderate and severe malnourished children. The sample size calculation was based on “exhaustive inclusion”, that is, we included all the eligible participants during the selected period of high malaria transmission (1st June – 31st August).

The field team has been trained to follow good clinical practices and study survey procedures. Before collecting patient’s data, informed consent was obtained from the legal guardian accompanying the child participating in the study. Legal guardians were informed that their participation in the study is not compulsory nor a condition to benefit from the medical care of their child. In addition, it was agreed that the information collected in this study are and will remain confidential.

Results obtained by RDT and microscopy were coded independently by two data clerks using the software Open Clinica Version 3.1.4. Descriptive statistics was performed using proportions, means or median. Additionally, the performance of RDT was evaluated  by  calculating  the  sensitivity,  the  specificity, positive predictive value, the negative predictive value, and the timeliness as follow:

Timeliness is the average of time required to get the RDT result (a sum of the time required for each RDT test divided by the number of tests). Additionally, the diagnosis accuracy (DA, a proportion of correctly classified subjects [True Positive + True Negative] among all subjects) and the Youden’s index were also calculated. Youden's index is calculated by deducting 100 from the sum of test’s sensitivity and specificity expressed as percentage (Ana-Maria, n.d.). Furthermore, the agreement between the microscopy and the RDT was computed using the Cohen-Kappa coefficient. Data were analyzed using the Stata10 -IC software (stata Corp LLC, TX).

A total of 131 malnourished children aged 1-59 months were enrolled in this study, two thirds were severely acute malnourished (defined as weight-for-length/height z-score less than -3 SD), and 52.3% were females. Measured fever or history of fever during the previous 24 h was reported in 81.7% of children. Patients’ socio-demographic characteristics are summarized in Table 1. 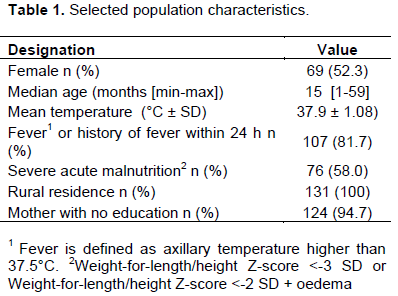 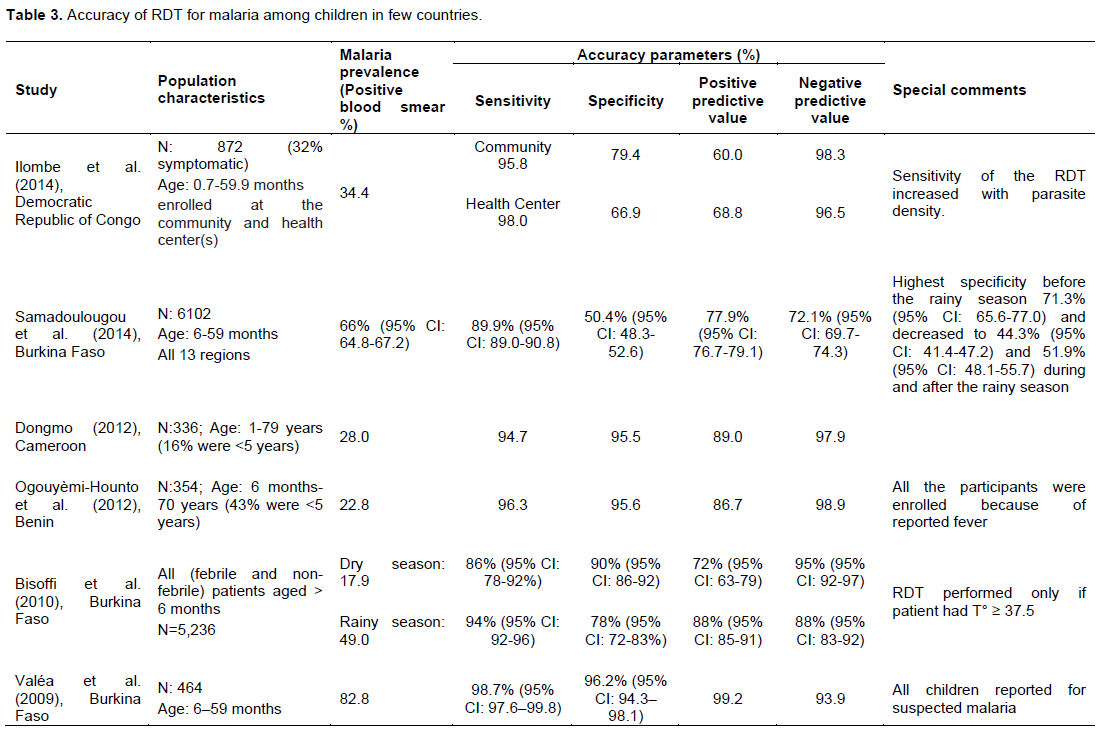 The sensitivity found in this study was higher than that found by a meta-analysis combining over 70 studies in the general population [95.0%] (Abba et al., 2011). Predictably, the specificity found in this study was either lower or in the same range of specificity found in other studies in  community  or  health  settings  in  the  general population. The characteristics of the RDT, the endemicity of malaria in the study region, and the high transmission during the rainy season all enhanced the risk of low specificity of the RDT (true positive). Additionally, it is hypothesized that the lower specificity of HRP2-based RDT among malnourished children is related to a weakened immunity which consequently causes a reduction or a lack of production of anti-HRP2 antibodies which neutralize HRP2 produced by malaria parasite. It is noteworthy to mention that the diagnosis of malaria infection based on microscopy might fail to detect submicroscopic infections because the detection limit of the thick film ranges between 10-20 parasites/µl (Haute Autorité de Santé, 2016). Furthermore, RDT is unstable in high temperatures (Valea et al., 2009). This could also apply to the local context where the temperatures are in average above 32°C during storage and in the field.

This study showed that in high malaria transmission-setting and where malnutrition is prevalent, the test should not only be conditioned by the presence of history of fever. Low specificity can result in treatment of fever as symptomatic malaria and may distract the clinician from correct care of the child. From another hand, our study results raise the potential risk of using blood-smear microscopy as the gold standard in high malaria transmission setting where malnutrition is prevalent because of the compromised immune system and the development of malaria disease in low density parasitemia (submicroscopic infections).

We recognize the limitations of our studies that are mainly the small sample size and the lack of tests of other morbidities that are either associated with- or risk factors for moderate and severe acute malnutrition such as HIV and tuberculosis. However, this study could be considered as a pilot study and more studies are needed in the context of infectious diseases (malaria) and malnutrition in order to build the evidence on the proper diagnosis and treatment of malaria. The prevalence of HIV/Tuberculosis are low in the study area (Nanoro Health District, 2014), this would limit their confounding of the findings in this study.

The authors appreciate the study participants, their parents/guardians for participating in this study.