This study investigated the effect of biochar on dispersible clay and soil chemical properties. The treatments consisted of four rates of milled biochar (0, 450, 900 and 1344 kg/ha) arranged in a Completely Randomized Design with four replicates. Surface (0-15 cm depth) soil of Iwo (Sandy loam) and Egbeda (Loamy sand) soil series were collected from the Teaching and Research Farm, Obafemi Awolowo University, Ile-Ife, Nigeria. 1 kg of each soil sample was thoroughly mixed with milled biochar at different rate and maintained at field moisture capacity for a period of 12 weeks in the screen house. Soil particle size distribution, bulk density, dispersible clay, soil pH, soil organic carbon and available phosphorous were determined. Data obtained were subjected to analysis of variance; Duncan’s New Multiple Range Test was used to separate significant means at p ≤ 0.05. It was revealed from the results that biochar addition at rate 450 and 1344 kg/ha appeared to be more beneficial and adequately improved soil pH, organic carbon and available phosphorous. Biochar at 900 kg/ha significantly reduced dispersible clay. It was concluded that short term biochar amendment did not improve soil quality of loamy sand.

Physical  properties  of soil have direct influence on soil productivity and crop production; they determine soil water holding capacity, aeration and strength which affect root activity (Rattan et al., 2015). Organic matter content of the soil has great effect on physical properties of the soil. It improves soil structure, increases soil porosity and enhances nutrient and water retention. All these result into improved root growth and crop yield. Nutrients are held and made available for plant uptake by clay minerals and soil organic matter. Usually, application of organic materials such as compost and manure into soil enhance nutrients retention capacity. Biochar has been reported to be more effective than other organic materials in retaining and making nutrients available to plants (Li et al., 2014). Its surface area and complex pore structure are habitat to bacteria and fungi which are beneficial to plant (Jin et al., 2014; Li et al., 2014). Also, the higher content of ash/minerals in biochar may contribute to its stability in soils (Han et al., 2018; Yang et al., 2018).

Various soil properties affect the ability of the soil to optimally support growth of plants either directly or indirectly by interfering with plant-soil interactions, reactions and processes. These properties can generally be grouped as either physical or chemical. Some of the physical properties include soil bulk density, texture, structure, porosity, hydraulic conductivity, etc., while some of the chemical properties include pH, organic carbon, cation exchange capacity (CEC), etc. Improvement in soil physical properties will minimize the risks of degradation in agricultural soils caused by traditional management techniques such as tillage. Biochar has been found to alleviate soil compaction by decreasing bulk density, which increases porosity and enhances favorable soil processes (Akhtar et al., 2014). Application of biochar as a soil amendment reduces tensile strength and penetration resistance.

Clay dispersion is the precursor for selective washing away of clay particles by agents of erosion, this results into severe deterioration of the soil. This dispersion is affected by several soil physical, chemical and biological properties. Despite the relative availability of biochar in Nigeria, its effectiveness to ameliorate clay dispersion and other soil properties has not been properly evaluated. This research was conducted to examine the effect of biochar on selected soil chemical properties and dispersible clay.

Bulk top soil (0 - 15 cm) samples of Iwo (Sandy loam) and Egbeda (Loamy sand) soil series, which are both Ultisols were obtained from different uncultivated land at the Teaching and Research Farm of the Obafemi Awolowo University, Ile-Ife, Nigeria (Latitudes 7° 32’N and 7° 33’N and Longitudes 4° 32’E and 4° 34’E). The soils were classified as Ultisol due to the presence of kandic horizon (USDA Soil Taxonomy, 2017). It has a finer texture at subsoil horizon that is about 18 cm thick or more below the coarser-textured surface horizon. The soil moisture regime of Ile-Ife area is ustic. The vegetation over the soil was cleared before  the  soil  was collected. Bulk top soil (0-15 cm) samples were obtained randomly in the field with a spade and mixed together.

Bulk samples of both Iwo and Egbeda soil series collected were air-dried, and sieved through a 6.7 mm sieve so as to preserve aggregates. Another fraction of the soil was also sieved through a 2 mm mesh number, from which antecedent physical and chemical properties of the soil were determined. These include soil pH, organic carbon, available phosphorous, bulk density, field moisture capacity and dispersible clay index. The charcoal used for the experiment was crushed into fine particles to increase its surface area for better reaction within the soil and then, was also sieved using 0.5 mm mesh number.

The particle size distribution of the soil was determined by the modified hydrometer method used by Oyebiyi et al. (2018), while the soil textural triangle was used to classify the soils into textural classes.

The soil pH was determined by digital pH meter (Walk lab Ti 9000) in a soil-water suspension ratio of 1:2 in 0.01 M CaCl2. Soil organic carbon content was determined by wet digestion method using potassium dichromate (K2Cr2O7) as oxidizing agent in the presence of concentrated sulphuric acid (H2SO4). The percent organic carbon was determined by titrating the solution with 1 N ferrous ammonium sulphate solution. Available phosphorus was determined using the Bray-1 method and read at 660 nm wavelength. Dispersible clay was determined using centrifuge machine and spectrophotometer at 660 nm to measure the turbidity. A standard curve was plotted with the concentrations of the standards against the absorbance readings and this was used to determine the concentrations of clay in the samples (Pojasok and Kay, 1990).

The data obtained were subjected to analysis of variance, Duncan’s New Multiple Range Test was used to separate significant means at p ≤ 0.05. 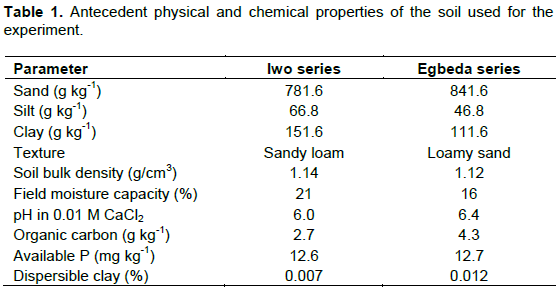 Table 2 shows the effects of the treatments on soil dispersible clay index after 2 to 12 weeks of addition. In Iwo series, the 900 kg/ha addition of biochar significantly decrease the dispersible clay at weeks 2 and 10. This could be as a result of negative surface charge of biochar which attracts cations (Usman et al., 2015); these cations serve as bridge between biochar and clay particles. There was no significant difference among the treatments at the end of weeks 4, 6, 8 and 12. For Egbeda series there were no significant difference between dispersible clay content of the treatments throughout the 12-week period of the experiment. However, treatment 450 kg/ha increased the dispersible clay content at weeks 10 and 12 but not significantly. This may be due to the fact that the soil is already rich in carbon. This was in line with the findings  of   Yao  et  al.  (2013)  who  reported  that  clay dispersion depends on the soil amendment.

The effect of treatment on soil pH and organic carbon content over a period of 6 and 12 weeks and available phosphorous at week 12 only are shown in Table 3. Soil pH of the two soil series was not significantly influence by biochar application except in the 12th week of Iwo series where biochar significantly increased the soil pH. Shareef and Zhao (2017) reported that application of charcoal (biochar) increased soil pH, and also decreased Al concentration in acid soils. 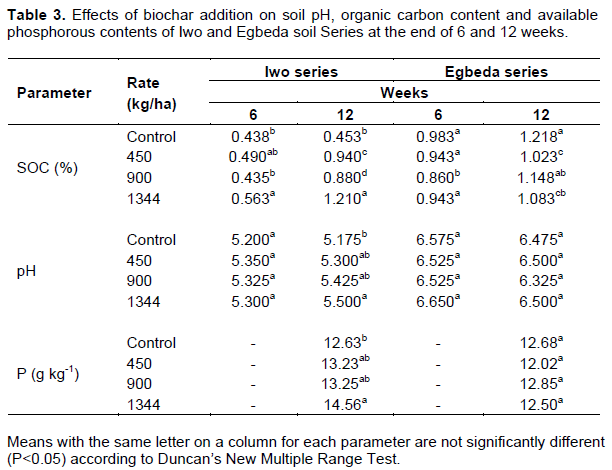 Whereas, the control (without biochar) at week 12 was significantly (P < 0.05) higher than those with treatments.

Available phosphorous content was increased as the rate of biochar increases in Iwo soil series. Gao et al. (2018) also found that biochar application increased phosphorus concentration of agricultural soil. While biochar at rate 1344 kg/ha had significantly highest P contents, there was no significant difference among other rates. But no significant difference was observed in the available P content of Egbeda soil series at various treatments level. A slight increase in available P was observed in treatment 900 kg/ha, although not significant.

Generally, the increase observed in soil pH and available P from different rates of treatments was similar to the findings of Atere and Olayinka (2013).

Table 4 shows the effect of biochar addition on organic carbon (OC) sequestration in Ultisol after 6 and 12 weeks of addition. OC sequestration  significantly  reduced  from 21.66 to 13.50% at 6 and 12th week, respectively. Since carbon sequestration is long term storage of carbon in soil, the reduction of organic carbon from 6 to 12th week may be due to decomposition with time (Purakayastha et al., 2015). 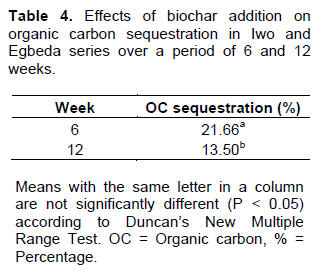 The sandy loam soil (Iwo series) responded better to biochar addition when compared with the loamy sand (Egbeda series). Biochar addition at rate 450 and 1344 kg/ha appeared to be more beneficial and adequately improving the soil pH, organic carbon and available phosphorous. 900 kg/ha addition of biochar significantly decreased dispersible clay under the conditions of this study. It was concluded that short term biochar amendment did not improve soil quality of loamy sand.