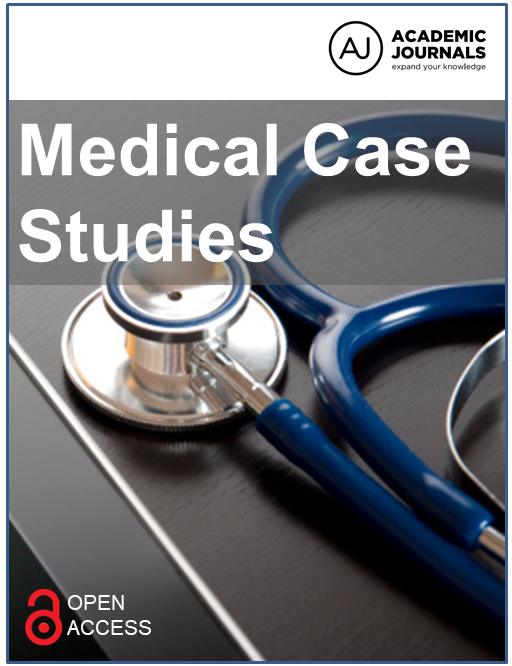 Temperomandibular joint (TMJ) ankylosis is loss of joint movement that results from a union of the mandibular condyle to the base of the skull. Managing airway is considered to be one of the most difficult and challenging procedures when there is a diseased temperomandibular joint as a result of inadequate mouth opening. Although TMJ ankylosis is well known risk factors of difficult airway management, the techniques used are dependent on the expertise of the concerned anesthesiologists and available resources. Techniques used to secure airway in adults may not be ideal for children and sometimes dedicated equipment may not be available. In this case report we described a case of 14-year-old female patient diagnosed with bilateral TMJ ankylosis and who underwent surgery for left side temperomandibular ankylosis release and temperomandibular joint reconstruction under general anesthesia with a blind nasal intubation.

Temporomandibular joint ankylosis results in restricted or nil mouth opening and jaw function get affected (Sankar et al., 2016). It is a serious and disabling condition that may cause problems in mastication, digestion, speech, appearance, and hygiene. In unilateral cases, mandible can be forced to open because of the elasticity of the mandible and the minimal mobility of the cranial sutures. A complete absence of mouth opening and recession of the chin are typical characteristics of the bilateral ankylosis. It may be unilateral or bilateral. Facial asymmetry, deviation of mandible and chin on affected side, hypoplastic mandible with receiding chin and fullness of face on affected side are the features of unilateral TMJ ankylosis (Choudhary and Gupta, 2014; Gayle et al., 2013). The technique such as blind nasal intubation, retrograde intubation using a guide wire, intubating with the help of a fibreoptic laryngoscope, and the time tested tracheostomy have been used for a long time to manage airway (Sankar et al., 2016).

A 14-year-old female patient (40 kg, ASA physical status II) was admitted to the hospital by the maxillofacial surgeons for release of bilateral fibrous TMJ ankylosis under general anesthesia. She had painless gradual deformity since 3 years back. Since then, the mouth opening was progressively decreased and she was restricted from taking solid food. She started to decrease her socialization at school with her peers due to facial disfigurement. She had neither past history of surgery nor exposure to anesthesia before. She had no history of hoarseness of voice, shortness of breath and difficulty in swallowing. She had no history of easily bruising, epistaxis or known bleeding disorder. She had no other concurrent medical problems. Her vital signs were normal. Physical findings included bilateral deformity of TMJ. Her Mallampati classification was impossible to elicit. For airway, examination inter incisor gap was less than 10 mm and there was limitation of TMJ movements in addition to severe retrognathia, and micrognathia (Figure 1). The neck mobility was normal and the nares were patent. 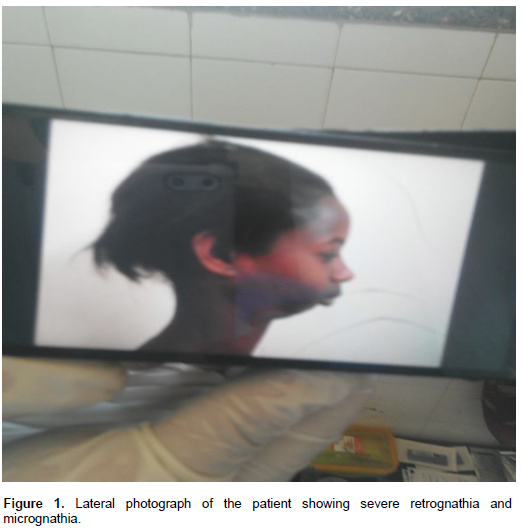 The patient was evaluated and an informed written consent was taken from her family. Fibre-optic bronchoscope was absent as a result, blind nasal intubation was used and tracheostomy was kept ready in case of an emergency as an alternative technique. After the placement of five lead ECG, SpO2, capnography and noninvasive blood pressure monitoring, the patient was pre-oxygenated with 100% O2. On the day of surgery, the patient was premedicated with metoclopramide (5 mg) and atropine (0.2 mg) intravenously. Preoxygenation was done with 100% oxygen for 5 min. Anaesthesia was induced with 2% halothane then concentration of halothane was increased to 4% and plain preservative free 40 mg IV lidocaine was used. Induction was done with simultaneous administration of 25 mg pethidine and 30 mg ketamine, 40 mg propofol and 4% halothane after the patient was kept in sniffing position. Face mask ventilation was possible but oral airway insertion and laryngoscopy was impossible because of the patient’s restricted mouth opening. After good oxygenation with face mask, nasal blind intubation was attempted with no visualization of the pharynx by spilling adrenalin (1:200,000) nasal spill to decrease bleeding. We could not try trans nasal intubation using a broncho fiberscope as there is no broncho fiberscope in our institute.
Therefore, we decided to perform blind nasal intubation after successful oxygenation with face mask ventilation and confirmation of establishment of deep level of anesthesia. Then, we gently inserted a topical jelly lubricated size 4 mm portex cuffed nasal tracheal tube, through the right nostril and slowly advanced to the hypopharynx. The neck was extended and the tube was inserted into the larynx. Correct placement of the tube was confirmed by chest rise, bilateral symmetric air entry to both lungs on auscultation and capnography tracings. Muscle relaxation was maintained with intermittent boluses of vecuronium. The surgeon made local infiltration with 10 ml of 2% lidocaine with adrenaline to anesthesia the area. Surgery proceeded with halothane 2MAC and vecuronium. The patient was reversed with atropine (0.5 mg) and neostigmine (1.5 mg). The patient was extubated awake after thorough suctioning both orally and nasally. The intraoperative and postoperative period was uneventful. She was shifted to the PACU confirming that ETCO2 and SaO2 were maintained in normal ranges. After two weeks, the right side TMJ Ankylosis was released and reconstructed under general anesthesia with a direct endotracheal intubation.
Consent for publication and informed written consent
Informed written consent was obtained from patient’s father. He understood that the patient’s information and findings are going to be published without his child name attached and the text and any pictures published in the article will be freely available on the internet and may be seen by the general public.

The temporomandibular joints (TMJ) play a crucial role in mouth opening, and disorders of them can cause problems to anesthetists (Kulkarni et al., 2013; Mohan et al., 2012). Although fibreoptic intubation is the gold standard for a difficult airway, we could not use it as it was not available in our institution. On the other hand, blind nasal intubation can lead to bleeding, oedema and further airway complications on repeated attempts. Tracheostomy is an invasive procedure with a post-operative morbidity and so it was reserved for emergency. In our case, although tracheostomy kit was prepared, it was reserved as the last option in case of emergency as it is obviously associated with severe morbidity, mortality and long term side effects. Thus, in this case blind nasal intubation was planned to be used as a first option and the planned procedure was so successful on the first attempt.

Firstly, we would like to thank the patients and patients family for all their cooperation’s.