Cuscuta campestris yunker, a dangerous obligate parasitic weed observed in cassava crop in the eastern part of the Democratic Republic of Congo

Cuscuta campestris (field dodder) is an obligate shoot parasite weed causing growth inhibition and yields losses of many agricultural crops worldwide. C. campestris is often observed in many crops; among is cassava in the eastern part of the Democratic Republic of Congo. In 2014, subsistence farmers realised that it may be responsible for yield reduction of many crops. This study evaluates the effect of C. campestris on the yield of a bio-fortified cassava. Six quadrats were installed in an existing 2 ha cassava field. In each quadrat, cassava plants infected by C. campestris were marked while in the same quadrat all other non-infected plants were controls. Yield parameters of 40 infected plants were compared to parameters from 43 uninfected plants. At the harvest time, the number of tubers by plant, fresh weight of tubers, tuber diameter, tuber length, and tuber dry weight were measured. Treatment means were separated using the least significant difference test at 5% probability level and the relative yield loss per cassava plant was estimated. Tuber diameter, tuber length and tuber dry weights were significantly reduced in C. campestris infested cassava as compared to controls (pV<0.001).  C. campestris caused substantial estimated yield losses of 48% per plant. The number of tubers was not reduced (pV=0.281), likely because C. campestris appeared six months after the planting date, when the tubers number was already set.

Cuscuta campestris Yunker (field dodder), a member of the Convolvulaceae, is an annual obligate stem parasite causing growth inhibition  and  yield  losses   in   various crops worldwide (Holm et al., 1997; Mishra et al., 2006). The C. campestris radicle has no apical meristems and degenerates a few days after germination (Sherman etal. 2008). It is an above ground; obligate parasites that must make contact with a susceptible host in order to survive. Once the weed seedling makes contact with a host, it develops haustoria and connects to the host’s vascular bundles, forming a highly efficient absorption system that enables the parasite to divert resources from the host (Dawson et al., 1994; Costea and Stefanovic´, 2009; Vaughn, 2003).
C. campestris is not only an aggressive weed, but can additionally serve as a vector for pathogens, such as Cucumber Mosaic Virus and African Cassava Mosaic Virus (Wisler and Norris, 2005). Current control methods include separation of dodder seed from crop seed, pre-emergent herbicides, and mechanically burning or pulling off dodder from host plants (Wisler and Norris, 2005).
In March 2015 C. campestris was observed in Cassava crop at the Kashushatrial station of the Université Evangélique en Afrique where bio-fortified cassava was grown by the International Center for Tropical agriculture (CIAT).
Cassava is the main crop in the Democratic Republic of Congo used as food by the majority of the population (FAO, 2001). Lack of soil fertility and diseases such as African Cassava Mosaic Virus and Bacterial Blight are the greatest production challenges in this region. Cassava is a very hardy crop that can grow reasonably well in areas of infertile or very acid soils, under conditions of low or unpredictable rainfall, and with minimum care and inputs. For that reason, it is the preferred crop by subsistence farmers in this region, who often live in isolated areas with poor soils and sometimes mountainous topography. Cassava yields can be substantially reduced by weed competition (Ekeleme et al., 2003; Howeler, 2014). In Africa, weeds are responsible of 17% of Cassava yield loss and their effects are equivalent to yield loss caused by Bacterial Blight (Howeler, 2014).
In the DRC, Cassava is usually planted in the middle of September and weeded by hand (hoe) two to three times during the first 3 to 4 months. The time Cassava takes to mature depends on varieties and varying from 10 to 24 months. Manual weeding can become insufficient if the cultivated area is bigger. C. campestris is challenging to control because it climbs and wraps tightly on the plants, causing breakage of shoots during hand weeding (Melifonwu et al., 2000).  It can regrow from stem fragments, so even when it weeded, fragments of dodder can be disseminated in the field and develop new plants if they are attached to the cassava stem (Dawson et al., 1994). Small farmers believe that dodder does not have roots then they believe it is dangerous specie because it is very difficult to be managed and physical removal of that weeds by hand is time-consuming. The weed continues growing after the destruction of basal organs. Also, dodder is cited as a factor disseminating many virus (Roos and Aldrich, 1988), therefore it may contribute to the African Cassava Mosaic Disease dissemination, the most  important  factor  limiting  cassava  yields  in  many parts of Africa (Fauquet and Forget, 1990). This study evaluates the effect of the dodder on cassava yield at the Université Evangélique en Afrique’ trial station following observations made from farmers’ fields.

An experiment was carried out at Kashusha, the trial station of the Université Évangélique en Afrique located at 02°19’0.02” latitude and 28°47’45,9” longitude and an altitude of 1712 m where a bio-fortified cassava crop variety 01/1661 was planted on September 28, 2014. C. campestris was observed in the cassava crop six months after planting date and the assessment of the effect of that weed on the cassava yield undertaken immediately in March 2016.
Considering the distribution of the weed in the field, an area of 2 ha was selected. Six quadrats (2×2 m) were installed using a completely random design. A plastic sheet fixed on cassava stem was used for quadrat demarcation.  In each quadrat, cassava plants infected by weed were marked using a coloured plastic bandage while in the same quadrat all other non-infected plants were used as controls.  Yield parameters of 40 infected plants were compared to parameters from 43 uninfected plants.
In April 2015, C. Campestris plants died and stopped competing with cassava, however, bandages on oldest infected cassava plants were kept as they were clearly identified at the harvest period, which was made on first October, 2015.
At the harvest period, the number of tubers by plant, the fresh weight of tubers, diameter and tuber length were determined. To evaluate the tuber dry matter, samples were oven-dried at 70°C for 96 h until constant weight, and weighed.
All data were subjected to analyses of variance (ANOVA) using GENSTAT 13 statistical package. Treatment means were separated using the least significant difference (LSD) test at 5% probability level. The relative yield loss (YL) per cassava plant due to C. campestris infestation was estimated using the equation YL(%)=(1-YCW/YCM)×100. Where YCW and YCM are crop yields per plant in competition with weeds and in weed-free conditions respectively (Mahajan et al., 2014).

Dodder weed significantly reduced tuber diameter (p<0.001), tuber length (p=0.046) and tuber dry weight of cassava (p<0.001). The number of tubers was not affected.
Tuber diameter decreased from 5.9 cm to 5.1 cm when cassava crop was infected by dodder (Figure 1a; Table 1). The length tuber changed from 17.7 to 15.6 cm because of parasitism effect from the weed (Figure 1b). Finally, the dry weight of each tuber was reduced by 39% leading to an average yield loss of 47% for infected plants (Figure 2).
Tuber dry weight per plant decreased from 922.8 to 483.86 g.plant-1 when cassava was infected by C. campestris.  The coefficient of variation seems to be higher because parameters were taken for each tuber and by plant. Usually there is a big difference between tubers on the same plant, and parameters like diameter and tuber length can change from a tuber to another. This variation should disappear or decrease when the yield per hectare is considered. Also, because the weed infestation was made naturally the density of Cuscuta attached to cassava was very different from one plant to another leading to the high variation of effects on the yield. 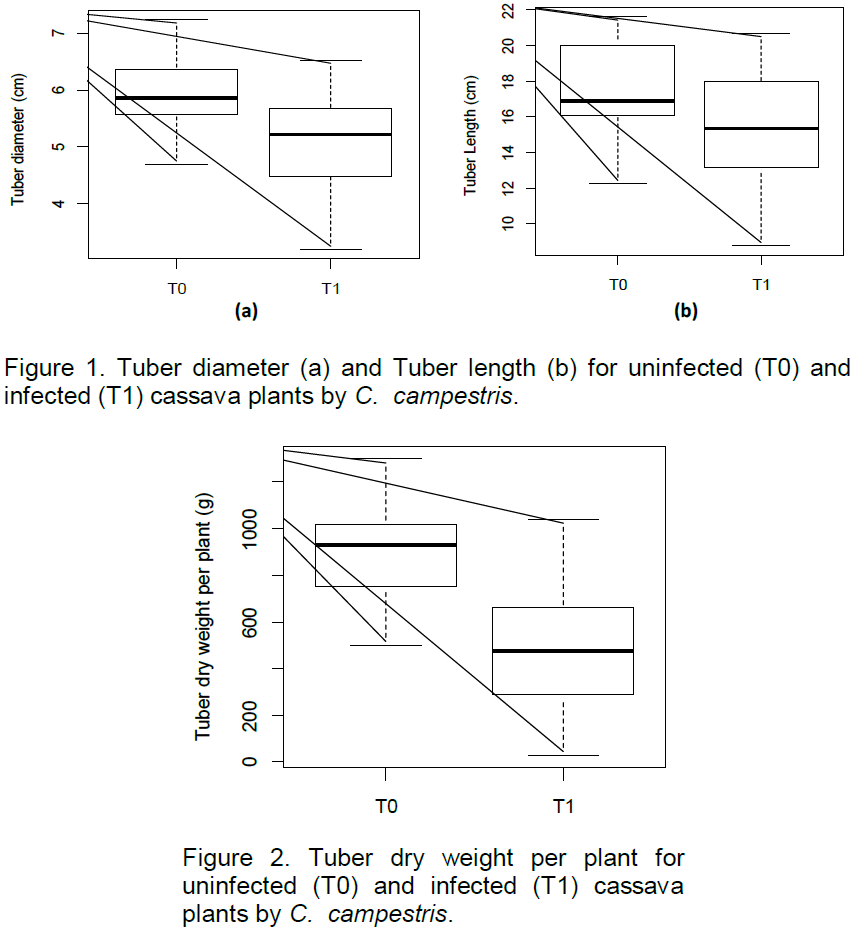 Field dodder is a problematic weed in tropical areas that can substantially reduce the yields of many crops (Holm et al., 1997; Mishra et al., 2006). In this study, cassava yield was reduced by 47% for cassava infected by C. campestris six months after the planting date. Peasant farmers usually stop weeding cassava following canopy closure, as the crop canopy suppresses most weeds. Because field doddergets most of its energy from its host rather than through photosynthesis, cassava leaves do not affect the development of dodder, which can thrive under the cassava canopy, causing substantial yield losses.
The effect of C. campestris on cassava yield can become more important when the infection begins before the number of root tubers is set. Usually the most weed sensitive stage of Cassava occurs during the third month after planting date, when root tuberisation takes place (Melifonwu, 2000). At that period, some weeds like grasses dominate Cassava crops at the above and the below-ground levels, causing reductions of 50 to 90% yield (Chikoye et al., 2001; Melifonwu, 1994).  Different from field dodder, grasses are sensitive to shade; they die when shaded during a long period and they may or not reduce cassava yield if they appear 6 months after cassava planting date.
Effective control of dodder is extremely difficult to achieve since dodder seeds can remain viable in soil for 10 to 30 years or more and continue to germinate and emerge throughout the warm seasons, depending on the crop species and environmental conditions (Mishra et al., 2006). Lanini (2004) found that growing wheat (Triticum aestivum L.) followed by corn (Zea mays L.) in a field heavily infected by Lespedeza dodder (C. pentagona Engelm.) reduced the number of dodder plants infesting tomato by 90%. Thus, control measures that reduce seed production, can reduce infestations in subsequent years. Once dodder germinates and attaches to a host, the nature of attachment and association between host and parasite excludes mechanical control and requires a highly selective herbicide to destroy the parasite without crop damage (Fer, 1984). In South-Kivu province, Eastern D.R. Congo, small farmers do not have access to herbicide, so it is likely that dodder control will remain a major problem in the region. Field crops are hand weeded and usually farmers destroy only the belowground party of the weed while the aboveground continue growing on the stem and branches (Melifonwu et al., 2000). Several different methods for dodder control in crops were reviewed by Parker and Riches (1993) and they suggest intercropping system as a control method. In South-Kivu cassava is intercropped with many other crops such as legumes (common bean, soya bean), maize and banana. Unfortunately those crops are also potential field dodder hosts.
To control that weed, herbicide like glyphosate are usually recommended, unfortunately C. campestris can be resistant to this chemistry product (Nadler-Hassar et al., 2009), depending on environmental conditions. In contrast to Nadler-Hasser et al. (2009) results, Cook et al. (2009) found dodder to be Gylphosate-sentitive when it was applied at a dose of 140 g/ha in a Citrus field crop.

This research was supported in part by CIAT-Harves Plus and Bread for the World, through the Université Evangélique en Afrique. Thanks are due to all for providing financial support.