Irrigation potentials and rice self-sufficiency in Nigeria: A review

Nigeria has abundant land and water resources to embark on irrigation schemes to ensure all year round rice production. Additional yield to annual rice production through dry season farming in 2012 in 10 pilot States of the country was found to be over 1 million metric tonnes. This shows that an intensive and consistent irrigated rice production scheme will set Nigeria on a pathway to rice self-sufficiency thereby bringing an end to the gross loss in foreign exchange due to importation and smuggling of the commodity. The study reviewed irrigation subsector in Nigeria, and revealed that the prospects of achieving rice self sufficiency through irrigation farming is hampered by some major challenges namely-underdeveloped subsector promoted by fragmented, inconsistent and unimplemented policies,  multiple water regulatory institutions with overlapping and duplicating mandate and poor management system. Other challenges include- the absence of a viable market for local rice as well as high cost of labour inputs, irrigation equipments and other operating costs. The study concluded that for Nigeria irrigation potentials to be harnessed towards rice self-sufficiency there is need to amend policies on irrigation and water resources, create conducive market for local producers and provide subsidized and appropriate farm implements. 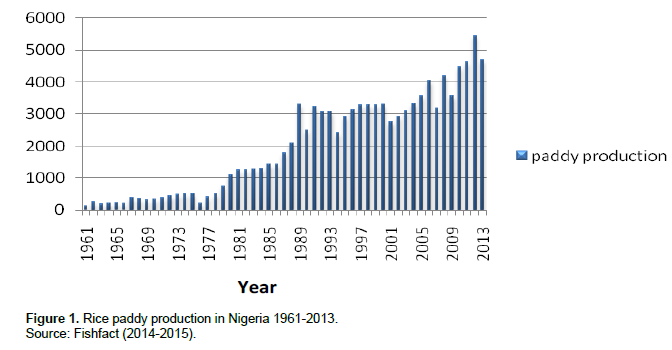 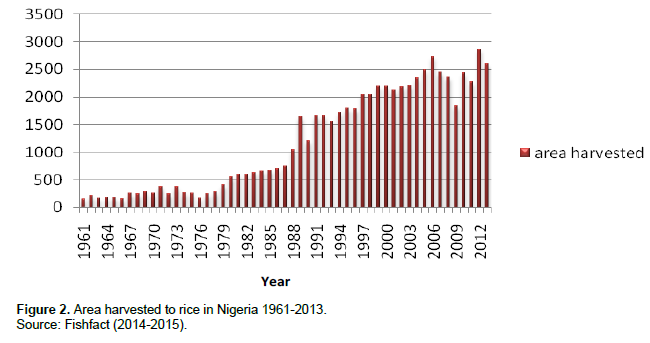 These water projects include provision of boreholes, rehabilitation of existing dams and water reservoirs construction etc. These existing dams and ongoing irrigation projects are clear indications of irrigation development and are thus prospects for irrigation rice farming and self-sufficiency in rice production in Nigeria.
Also under the Agricultural transformation Agenda (ATA), (which also builds on the vision 20:2020) the federal government with the assistance of the world bank has proposed a rehabilitation of three major irrigation sites in the north; the Bakolori and Rima all in Sokoto states, Hadejia jama” are in Kano and the Dadin  kowa  in the old Gongola State. With so many large water bodies of lakes and water reservoirs Nigeria has the potentials to engage in irrigation farming.
However, the water resources of the country are reportedly being underutilized, for example in 2000 it was reported that the water withdrawal for agriculture is only 5.5 km3. This could be explained by the findings of Valipour (2015a) that irrigation water requirement is affected by river basin management, water allocation policies and agricultural expansion which has earlier been discussed to be poor in Nigeria. Therefore, Nigeria needs the right policies for sustainable growth in the irrigation sector.
Land resource
The exact amount of land under irrigation in Nigeria is difficult to estimate because as observed by NINCID (2015), there is no commonly agreed definition of irrigation adopted by researchers and agencies. However, irrigation land potentials according to the estimates reported by FAO et al. (2014) vary from between 1.5 to 3.14 million hectares. According to this report, the potential irrigable land area is about 2.1 million ha. Of this, about 1.6 million ha is irrigable from surface water while 0.5million ha from ground water. Though, areas suitable for irrigation from ground water are yet to be assessed. However the World Bank (2014a) reported that areas which were equipped for irrigation at the FADAMA and for private small scale irrigation schemes are fully utilized while those for the RBDAs and sugar estate as well as the state development schemes are left underutilized. This situation shows potentials in land resources yet to be tapped.
About 150 new projects covering one million hectares of irrigable land, including dams, diver dams, inter basin water transfer and river training has been proposed for future implementation (Oyebande, 2015b). There are therefore, immense opportunities for prosperity for the Nigerian rice farmers and for development in the rice subsector (Table 2).
Higher returns over other ecologies
Irrigation is a technological input and productivity enhancing investment that stands out strongly as a result of its role in stabilizing yields (Sakairi, 2004). In addition to yield stabilization it avails the farmer the opportunity of multiple cropping in a year. Other advantages of irrigation farming that places it above other production systems is the fact that it increases food production and decreases the economic efforts of drought (Civil Engineers, 2015). This characteristics is of paramount importance in Nigeria in the face of climate change which has brought uncertainty to weather conditions in the country most especially in the northern part of the country which account for major food crops production in Nigeria e.g. cereals. Evidence from empirical studies has shown that higher yields are observed in irrigated crops particularly in rice. Average yields of 3.5 tonnes/ha has been observed in irrigated rice in Nigeria as against 2 tonnes/ha obtained in rain fed rice production even though these figures are far below observed yields of 6 tonnes/ha in other countries (Kebbeh et al., 2003).
These increases in yields are associated with a shift from traditional rice verities to modern varieties and also a shift in planting technique-from broadcasting to transplanting as well as increased in the use of other inputs like fertilizers (Mongkolsmai and Mark, 1989).

FUTURE OF IRRIGATION IN NIGERIA

To ensure sustainability and viability in irrigation farming, several studies have tried to determine the future by identifying important factors that affect the sector. Attempts are made by these studies to estimate the effect these factors (socio-economic, demographic, climatic or political) and unfavorable land use policies have on irrigation. These estimates are used to project future status of irrigation in Nigeria.
To meet the expected demand for irrigation in Nigeria, rapid population growth and urbanization play a major and significant role (NINCID, 2015; Takeshima and Adesugba, 2014). According to NINCID ( 2015) urban population in Nigeria is expected to grow at an average rate of 4.2%, the increased proportion of the urban area is expected to reach 63% of the national population in 2025. A major change induced by urbanization will be an increase in the demand for food like rice and wheat. Assuming rice consumption grows at the same rate as the population, the demand for rice is expected to reach 11 million tonnes by 2025. About 2 million hectares mostly of irrigated land is required to produce such quantity. This requires an expansion of the irrigated lands which is expected to grow by 0.6% annually from 1995 to 2020 (NINCID, 2014). While this expansion is desirable, it is expected to put pressure on renewable water resources in the future (Takeshima and Adesugba, 2014, NINCID, 2015; Valipour, 2014c). Nigeria’s abundant water resource is thus a potential to be meet this requirement by 2025. But effort will have to be doubled to develop the water resources to make the expected expansion in irrigated rice production feasible (NINCID, 2015).
On the other hand, urbanization has also been projected to reduce rural population and the economic population that is involved in agriculture. Movement of people from rural to urban areas will imply low labour supply in agricultural activities. Though Takeshima and Adesugba (2014) has reported abundant availability of labour in Nigeria, Valupour (2013; 2014a, b, c; 2015a, b) warns that labour availability in irrigation farming in future would generally be affected with the decline in rural population and  the economic population involved in Agriculture.
Climate change, agricultural research and development effort are other constraints that are expected to limit irrigation expansion (Takeshima and Adesugba, 2014). The area cropped to permanent crop for example is a factor which is dependent on climatic conditions, farmers’ tendency and government polices (which influences government policies). All these play an important role in the decision to allocate the required quantity of water for irrigation.
Other factors such as Human Development Index (HDI) and contribution of agriculture to Nations’ GDP have significant effect on irrigation generally in Africa. Valipour (2014a) in his study on land use policy and agricultural water management of the previous half of the century in Africa based on 2011 FAO data, reported that the value of permanent crops to cultivated area, HDI  and GDP were 8%, 0.471 and 31% respectively for Nigeria. However, Egypt having better agricultural water management than Nigeria has HDI of 0.662 and 22% as value of crops to cultivated area. This shows a low values for these important factors in Nigeria. An insightful look at the author’s findings indicate that intense development of irrigation will earn farmers additional income which will in turn improve farmers welfare and raise agriculture contribution to GDP. Consequently, government will be better encouraged to invest in agricultural research and development which is a critical factor that will determine whether   water   is   used   more   intensely   in   Nigerian agriculture (Takeshima and Adesugba, 2014).
Finally, owing to the unfavourable land use policy in Africa particularly Nigeria, the future of private ownership which is believed to be an effective way of irrigation water management is bleak because no farmer would be willing to invest on a land which he owns no title or ownership. There is a therefore, a need for good and concerted government polices to encourage farmers to use irrigation system and raise cropping intensity for irrigated areas (Valipour, 2014a).

This paper demonstrates that Nigeria has high potentials in rice irrigation farming particularly in areas of land and water resources which are relatively in abundance. Though yet to be fully developed, can afford the country the opportunity to attain rice self sufficiency in the nearest future. In addition to these important factors of production, irrigation also has higher yields potentials and offers opportunities for multiple cropping since water is guaranteed. Though, cost intensive, this production system brings reasonable returns to rice producers which boost the income of the farmers and the household.
To promote available and sustained rice irrigation production system, these bottle necks to increased irrigation rice production must be addressed. Amending some of these policies such as greater farmer participation in irrigation development should be encouraged; functions of water regulatory institutions should be streamlined with each institution given specific and defined roles to enhance efficiency in water resource management. Policies which also promote direct link of producer and consumers are necessary, this will provide protection for farmers ad avail them the opportunity of better prices for their produce. It is also important that assistance is given to farmers in the areas of subsidized inputs supply and well developed credit market for farmers to be able to access loans to purchase farm inputs as well as purchase and maintenance of farm equipment like the water pump. Another area of intervention which is of utmost importance is the purchase and even distribution of appropriate farm implement suitable for the irrigation ecology which will reduce the high cost of labour and the drudgery involved in manual labor employed in rice irrigation farming.