In Taiwan, the main livestock farming was concentrated at Pingtung, Yunlin and Chianghua counties. The treatment of livestock waste was commonly provided by the three-stage system including solid-liquid separation, anaerobic and aerobic fermentation in the field area of livestock farming. On completion of the treatment, the effluent was drained to rivers. However, part of the river was still polluted occasionally. The biogas was produced after anaerobic fermentation of livestock waste  (Chen  et al., 2008; Weiland, 2010; Bao et al., 2019), and then the residual solid and liquid were used as fertilizer to farmland (Holm-Nielsen et al., 2009).

In addition to the influence on plant diseases and insects, nutrients absorption imbalance will influence plant growth. The 16 main kinds of nutrient elements are necessary for plants (Kholmanskiy et al., 2019). To sustainably obtain the balanced nutrition, fertilization is necessary.

If the appropriate ingredients of liquid fertilizer were modified and supplied to crops, it will be rapidly adsorbed by crops and increase the quality of fruits. There are great amount of minerals, amino acids and humic acids in the livestock liquid that can promote the growth of plants (Richardson and Ternes, 2011); however, the negative influence of heavy metals and environmental hormones should be evaluated (Kelessidis and Stasinakis, 2012). This study was conducted to evaluate irrigated water that was replaced by livestock liquid to produce the liquid fertilizer. On the other hand, after application, the effect of different liquid fertilizers on tomato and wax apple were compared. In this experiment, circular agriculture and appropriate fertilization has been achieved.

This experiment was designed for the production of liquid organic fertilizers by livestock liquid. The materials used include: drainage water (or livestock liquid) (300 L), soybean powder (9 kg), rice bran (9 kg), phosphate rock powder (9 kg), seaweed powder (9 kg), molasses (18 kg) and microorganisms (3 kg). The hydrolysis of soybean powder will produce high polypeptide and amino acids and then offer abundant nitrogen fertilizer to plants (Kanu et al., 2009; Zhao et al., 2012). Phosphate rock powder (tricalcium phosphate) is commonly a kind of phosphorus fertilizer, or simply a phosphorus source in fertilizer (Xu et al., 2019). Vijayakumar et al. (2018) showed that application of a lower concentration (20%) of seaweed liquid fertilizer (SLF) will increase fresh weight, leaf area, protein, carbohydrate and lipids of Capsicum annum L. Hence, the seaweed was used to supply the potassium in liquid fertilizer. The productive methods are described as follows: At first, the 300 L plastic barrels were arranged, and the groundwater (or fermented livestock liquid) along with prepared materials were all put into the barrel. Thereafter, the liquid fertilizer was stirred by electric stirrer two times every day for 14 days. The stirring duration was 5 min every time. After 30 days, the crop experiments began. The experimental designs were described in Table 1. The tomato (CK, CF, LL, LF, LFE) and wax apple (CF, LF) experiments began from young fruit stage of the two kind of crops. The five irrigative times, the 1,500 L every time, and hence, the total liquid fertilizer amount was 7,500 L. The soil and leaves were sampled and analyzed before and after experiments. The quality of fruits was also estimated at the harvest stage.

Analysis of soils and plants

Pretreatment and analysis of soil

After taking back soil samples, these were air dried and grinded. Thereafter, the samples were shaken through a 2 mm sieve. Further, the soil was analyzed for the following indicators: (1) pH value: water : soil = 1:1, measured by a pH meter (McLean, 1982); (2) Organic matter content was measured by wet oxidation method described by Nelson and Sommer (1982); (3) calcium (Ca), magnesium (Mg), potassium (K) content by  extraction of the  Ca, Mg, K from the soil with 0.1 N HCl. The content of Ca, Mg and K was measured by inductively coupled plasma spectrometer (Jobin Yvon- 2000)   (Baker  and   Suhr,   1982);  (4)  phosphorus  (P)  was measured by molybdenum blue method (Bray No.1) (Murphy and Riley, 1962); (5) iron (Fe) and manganum (Mn) microelements have been extracted from the soil by using 0.1 N HCl. Their contents were measured by an atomic absorbtion spectrometry (AAS) (Cope and Evans, 1985).

Analysis and application of microbiology in liquid fertilizer

After sampling 1 ml of liquid fertilizers, 9 ml distilled water was added and the mixture was shaken. Then, 1 ml mixture was sampled and 9 ml distilled water was added. After multiple dilutions, the liquid was spread on the surface of solid medium (potato dextrose agar (PDA). Three replicates were made; afterwards, the solid medium was placed to the growth chamber at a constant temperature (27°C). After apparently observing the microorganisms, the total amount of microorganisms was calculated averagely for three replications. The calculation formula employed was as below:

Anthracnose is a kind of important disease that affect mango (Liu et al., 2014). Some methods were found to effectively inhibit anthracnose (Jiao et al., 2018). At first, the processing groups were set as follow: The isolated microorganisms strain from liquid fertilizer was inoculated in the medium containing agar located at the 1/4 right district. The medium were cultured in the growth chamber at a temperature of 30°C for 1 day. Thereafter, the anthracnose strain was inoculated on the 1/4 left district. The medium was continuously placed in the growth chamber and the temperature was set at 30°C. On the other hand, the treatment of check (CK) was set in such a way that only inoculating anthracnose strain was found on the 1/4 left district of medium; there were no isolated microorganisms strain on the medium. When the hyphae of anthracnose strain in the CK treatment was spread to the 1/4 right district of medium, the inhibition zones of processing groups were investigated.

Windows SPSS 10.0 was applied to treat the data statistically for variables analysis. Duncan’s multiple range tests were used in differentiating the variances. It was significantly different  if  P<0.05.

Experimentation of liquid fertilizer by fermented livestock liquid for crops

Table 2 shows that the soil pH of tomato was 6.77 before experiment. However, it was reduced after experiment in all treatments. It was possible that the application of chemical fertilizer and fermented livestock liquid led to the reduction of pH. The reason why the application of LF was reduced to the lowest pH among all treatments may be stronger acidity in fermented livestock liquid (data not shown). The soil organic matter, phosphorus, potassium, calcium and magnesium were all higher in the entire treatments after experiments. In addition to supplementation    of    essential   nutrients,    either   with increasing the available elements; however, the increase of microelements was limited. Table 3 shows that the nitrogen, phosphorus, calcium, magnesium, manganese, copper and zinc in the leaves of tomato were slightly higher after all treatments. Regarding the fruits quality of tomato, effects of the treatments of fermented stock liquid (LF and LFE) were higher than that of non-fermented (Table 4). The fruit weight, fruit width and fruit length were all excellent in the treatment of LF; however, soluble solid was highest in the LFE. In general, after the production of liquid fertilizer by fermented livestock liquid, it was then applied to tomato in a bid to increase its quality. Vijayakumar et al. (2018) showed that the usage of seaweed liquid fertilizer can increase the quality of Capsicum annum L.

In the  wax  apple  comparative  experiment,  the  focus  was only on the production and application of liquid fermented livestock fertilizer and common fertilizer (LF and CF). Table 5 shows that soil pH was reduced among different treatment. All nutrients were increased after treatments. The elements in the leaves of wax apple (Table 6), fruit weight, fruit width and fruit length along with soluble solid for LF were all higher than CF (Table 7). Lin and Chiu (2019) showed that the quality of wax apple was influenced by the absorption of abundant nutrients and  water.  In  this  experiment,  we found that when  the appropriate liquid fertilizer was irrigated, the quality of wax apple was increased.

Analysis and application of microorganisms in liquid fertilizer

In Table 8, it is shown that the microbiology phase in LF was most abundant among the treatments of LL, LF and CF; also, fungus and bacteria (Bacillus mycoides and Bacillus subtilis) were the main microorganisms. Additionally, the microorganisms were the most abundant in the treatment of WF. The C-3 was chosen for the inhibitive experiment of mango anthracnose. The result showed that anthracnose was inhibited by C-3 (Figure 1). Hence, the microbiology of fermented livestock liquid for the inhibition of pathogen can be an advanced research. Duan et al. (2019) reported that B. subtilis is a kind of microorganism that can inhibit some plant pathogens. 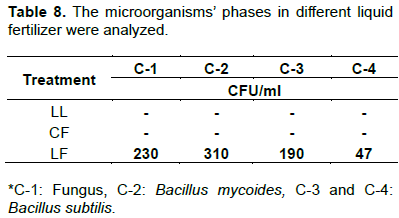 The fermented livestock liquid contains some beneficial materials that can promote the growth of plants. In addition to its use in direct irrigation of crops, it can be regarded as the medium of liquid fertilizer products. From this experiment, the quality of tomato and wax apple were both   increased  when   the   fermented   livestock   liquid fertilizer (LF or LFE) was applied On the other hand, the microbial phase was abundant in the treatment of LF and provided an important clue for advanced research in the screening of beneficial microorganisms for fermented livestock liquid.