The biological control agent Fusarium oxysporum f.sp. strigae isolate Foxy 2 had shown potential as a biological control in West Africa, however it failed to achieve the same results when used on Kenyan Striga hermonthica. A F. oxysporum isolate FK3 was obtained from infected S. hermonthica in a maize crop in Kenya and tested as a potential control agent of S. hermonthica in Kenya. Two pot trials were conducted where the S. hermonthica seed and varying rates of isolate FK3 (7.5 to 60 × 107 CFUs per pot) were added prior to planting of maize. Numbers of S. hermonthica plants were reduced significantly at the lowest rate of FK3 application when compared to the control from 10.7 to 5.5 per pot in the first trial and 21.3 to 7.9 plants per pot in the second trial. Where a more susceptible variety of maize was used in the second trial evidence of improved maize growth (fresh root mass and stover weight) and yield (weight of grains and whole cob weight) was associated with the reduction in S. hemonthica numbers. More extensive field trials are recommended to fully assess the impact of FK3 on maize yield. The findings support the idea that regional genetic variation in both S. hermonthica and the pathogen F. oxysporum may explain the regional specificity of F. oxysporum isolates as a potential biological control agents.

Maize is grown throughout the world but there are large differences in yield and consumption. African countries are relatively small producers in total tonnage, for instance the USA and China are the largest producers with 274 and 208 million MT/year while South Africa, with 12 million MT/year is the largest African producer.  However consumption as measured in g/person/day is highest in Africa with six out of the top ten consuming countries being in Africa (Ranum et al, 2014). Maize is by far the most important food crop in Kenya, playing an integral role in national food security. Maize is the primary staple food for most Kenyans, accounting for 36% of all calories consumed and 65% of staple food calories consumed. Kenya produces around 3 million tonnes of maize per year on about 2 million ha of land annually (Short et al., 2012). Striga hermonthica (Del) Benth (Witch weed) is a wide spread and endemic parasitic weed  of  a  wide  range of gramineous species, including maize, sorghum, millet and rice. The weed is found across sub-Saharian Africa (Beed et al., 2007). In East Africa, S. hermonthica is found around the Lake Victoria basin in Kenya, Tanzania and Uganda. In Kenya, Striga infestation is most severe in Nyanza and Western provinces. The parasitic weed is found in about 75,000 hectares of farmland and results in crop losses estimated at about US$ 10 to 38 million per annum (Manyong et al., 2008).  S. hermonthica is a major cause of yield loss in Western Kenya in maize where up to 70% losses have been reported (Khan et al., 2008). Despite extensive research and extension efforts the problem of this parasitic weed has not receded and with poor farming practices and potential climatic change the problem may further increase (Jamil et al., 2012).

There are numerous control strategies that have been developed for the management of S. hermonthica including push pull technology which involves establishing Desmodium uncinatum plants in the understory of the maize which are allelopathic to S. hermonthica (Khan et al., 2008), herbicide coated resistant maize (IR maize) (Kanampiu et al., 2002) and breeding of tolerant and resistant varieties of maize (Kamara et al., 2012). These technologies have shown to be effective under on-farm trial conditions; however their widespread adoption and uptake has been limited. Reasons for slow uptake are a complex mix of social and economic factors that influence the decisions of risk averse small-scale subsistent farmers.

Diseased  S.   hermonthica   plants  were   selected    in   a    maize field in Western Kenya. Based on the speed of growth on potato dextrose agar (PDA) plates an isolate FK3 was selected as a fast growing isolate. Subsequently, this isolate was confirmed as a F. oxysporum (Wainwright and Viljoen, 2014). The production of FK3 was done by inoculating sterilised rice grains in plastic bags and allowing to grow for 7 days at 22°C, the rice was then removed from the bags and dried to a moisture content of approximately 5%. The dried rice was then ground to a coarse powder prior to use. Each gram contained 1.5 × 107 colony forming units (CFUs).

Two pot experiments were undertaken during 2013 and 2014 at KARI/CIMMYT collaborative site in Kibos, Kisumu, Kenya. Plants were grown in a shade house. Each experiment consisted of a factorial design with two maize varieties and four rates of F. oxysporum isolate FK3. Five litres pots containing un-sterilized field soil were used with 20 pots per treatment. To each pot, 5 g of Di ammonium phosphate fertiliser (18-0-46) and a teaspoon of S. hermonthica seed and sand mix (approximately 1000 seeds) were mixed to the upper 5 cm layer of pot soil. Three maize seeds were sown per pot and thinned to a single seedling after germination. In both experiments, the rates of FK3 were the same; these being 7.5 × 107 (low rate), 1.5 × 108 (medium rate) and 6 × 108 (high rate) of CFUs per pot. Top dressing with CAN fertiliser was done at 6 weeks after sowing at a rate of 10 g per pot (27:0:0) (DEFRA, 2010).

Parameters assessed to validate the effect of F. oxysporum were S. hermonthica plant numbers per pot at week 14 and maize plant height and leaf number. In the second pot trial, additional parameters assessed were total weight of harvested cobs in each treatment, stover weight, cob length, cob diameter, 100 seeds grain weight and fresh root weight. Data obtained was subjected to analysis of variance and significant differences determined between the means by Fishers protected LSD at p<0.05, using GenStat software. The interaction of two-way analysis wase not presented as none were significant. 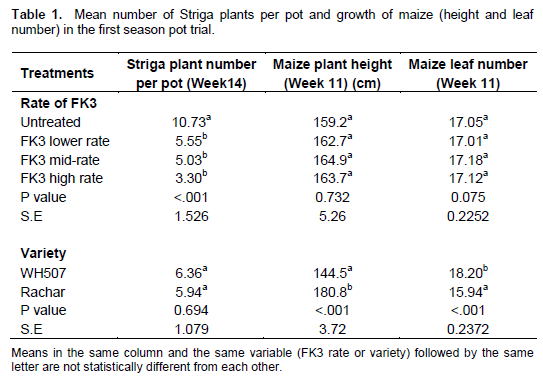 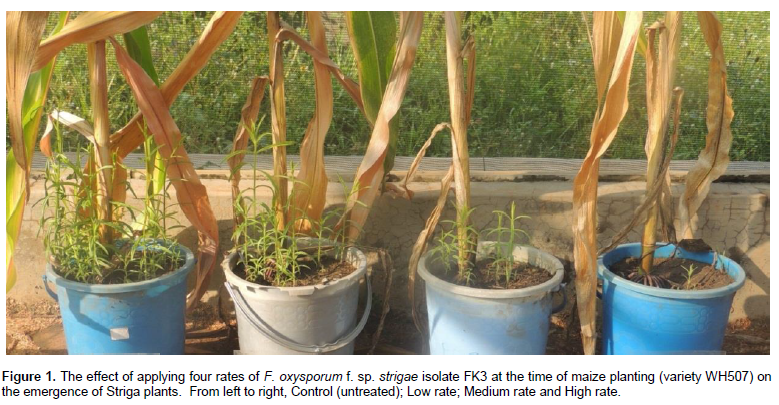 The maize yield parameters of the second pot trial gave significantly higher maize seed weight (100 grains) and total cob weight using the higher rate of FK3 when compared to the untreated control. However there were no significant differences in the cob diameter, length or moisture content with any rate of FK3. The variety WH403 gave significantly lower grain weight and higher total cob weight than WH507 but no other differences between cob diameter, length or moisture content (Table 3).

The preparation of the FK3 isolate for soil Inoculation was based on rice media that was dried and coarsely ground prior to application to the planting hole. This method of preparation showed considerable promise as a simple low cost method of manufacturing the inoculum and then treating the soil. This is similar to the concept of the Pesta granule as a means of inoculating the soil (Elzein and Kroschel, 2006), however the preparation based on rice grains is simpler than the Pesta granule that contained semolina, kaolin, and sucrose as well as the fungal inoculants.  The efficacy  of soil  applied  biological  control  agents such as FK3 appears to rely on dose, as increasing the rate showed a decrease in S. hermonthica plant numbers. However there was no interaction between dose rate and variety on Striga numbers.  There are practical and economic limitations on how much inoculum will be able to be applied to the field situation and further evaluation of this aspect will need to be assessed before such an application method may be applied in the field.

The performance of maize showed there were indications that when exposed to S. hermonthica, growth parameters were improved with the use of FK3 such as internode length, fresh root mass and stover weight. Similarly harvested yield of maize showed increases in grain and cob weight. However pot trials are not a reliable enough method to evaluate growth and yield studies based on twenty plants per treatment.  However the pot trials results reported here strongly suggest the need to move to open field trials to assess the impact of FK3 on maize yield when stressed by S. hermonthica infestations. The maize variety WH403 produced significantly more S. hermonthica plants than WH507, whilst there were no differences between WH507 and the local variety Rachar. Therefore, variety susceptibility with S. hermonthica is important, but the response to FK3 in Striga number reduction was evident in all varieties which indicates the wider applicability of this technique to a range of germplasm. The level of S. hermonthica in the first trial for WH507 (6.36 plants per pot) were very similar to those in the second trial (7.5 plants per pot) for the same variety which demonstrates the consistency of the methodology used.

The use of biological control treatment for the reduction of S hermonthica has numerous benefits for the control or reduction S. hermonthica. The inoculum can be  used  on both hybrid and farmer saved seed, the latter being of continuing importance as a farming practice in many sub-Saharan African regions. The biocontrol has the potential to be used on a range of species that are affected by S. hermonthica such as sorghum, rice and millet as well as maize though this needs verification. However this work in conjunction with other findings suggests that S. hermonthica pathogens are region specific.

The study formed part of the Integrated Striga Management for Africa project and was part funded by Bill and Melinda Gates Foundation.