Performance evaluation of a cassava solar dryer in Busia County

Cassava roots are processed by peeling using knives, chopping into small pieces, then dried and milled into flour with dried maize, sorghum or millet. This traditional method of drying takes 7 to 14 days and is prone to contamination. The objective of this study was to add value to small scale farmers’ cassava in Busia County through solar drying. Fresh cassava roots were peeled and washed in running water and sliced using a motorized chipper. The chips were randomly distributed on two trays and uniformly spread. Temperatures were taken daily at an interval of 30 min. After introduction of wet cassava (wet weight 4.6 kg) chipping in the dryer, pick temperatures were; first day, 41.7°C, second day 49.3°C and third day 41.5°C. The experiment was terminated at 11.00 am in the third day after achieving a moisture content of 16% dry and dry weight of 1.985 kg. From the results, it was observed that it took the fabricated dryer two and a half days to dry the cassava chippings compared to traditional method’s ten days of drying. The efficient solar dryer is recommended for use by small scale cassava farmers in the County.

Cassava (manihot esculenta Clantz) is mostly grown in Western, Coastal and Eastern regions of Kenya and is mainly used for human food and animal feed (Githunguri, 1995). According to the 2014 data gotten from the Food and Agriculture Organization (FAO), Kenya’s annual cassava fresh root production was estimated at 662,405 tons (Karuga, 2016) against an estimated annual demand of 301,200 tons of dried cassava. Noting that one ton of cassava flour is obtained from four tons of fresh cassava roots, there exist a demand gap which will be filled by coming up with value addition methods through mechanization and technology transfer. From Kenya National Bureau of Statistics  (KNBS,  2017)  data,  figures on county Gross Domestic Products (GDPs) adjusted to 2018, cassava plays a notable role in the economy of some counties of which it contributes to 5% of the value of marketed agricultural production and 2.8% of the whole economy of Busia County. The farmers in Busia generated about 2.5 billion from the sale of cassava in 2018. Busia County is rated as the highest 2018 acreage under cassava alongside Homa Bay, Siaya and Migori among others. Cassava cultivation in Kenya like other Sub Saharan African countries such as Nigeria, DR Congo, Angola, Ghana, Mozambique, Tanzania, Zambia and Malawi is done manually with very limited mechanization (Mrema et al., 2008).  Kenya  is a low mechanized country  because the use of mechanical power stands at 30%, hand power at 50% and animal draught at 20% (Awour et al., 2019). Cassava roots are a good source of energy while the leaves provide protein, vitamins and minerals (Montagnac et al, 2009). The roots are a physiological energy reserve with high carbohydrate content which ranges from 32 to 35% on fresh weight basis and 80 to 90% on dry matter basis (Gil and Buitrago, 2002). The protein content is low at 1 to 3% on dry matter basis (Buitrago, 1990) and between 0.4 and 1.5g/100g fresh weight (Bradbury and Holloway, 1988). According to International Development Research Centre (IDRC) survey carried out in Busia County in 2019, mechanization of cassava was limited to land preparation and value addition in terms of processing. Fresh cassava roots are highly perishable. The processing into cassava four extends the self-life, reduces content of the carcinogenic glucosides to safe limits, and diversifies the use of cassava for enhanced food security. Other benefits of processing and value addition include savings in the cost of importing wheat, reduction of the overdependence on maize and improved nutritive value. In Nyanza and Western provinces of Kenya, cassava roots are processed by peeling, chopping into small rectangular pieces, then dried and milled into flour with either dried maize, sorghum or millet (Githunguri, 1995) for food (ugali) the period for sun drying is 7 to 14 days. For local brew called busaa 14 days, and for obusuma among the Baluhya it takes 3 to 5 days. These traditional methods of open sun drying are prone to contaminations due to dust, bird’s droppings, crawling insects and formation of moulds. According to Kaaya and Ebuku  (2010)  drying cassava  chips  on  bare ground, storing by heaping on bare floor and storage in old containers such as Jerri cans were among the practices positively associated with aflatoxin contamination. The objective of this study was to evaluate the performance of a cassava solar dryer for enhanced value addition to small scale farmers’ cassava in Busia County. The specific objectives were to determine the moisture content; and temperature variations of the dried cassava and comparing solar drying with traditional methods. This study is in line with the Government of Kenya Big Four Agenda (2018-2022) on “food and nutrition security”; the Ministry of Agriculture Strategic Objectives “to enhance national food security” and the National Food Safety Policy “the government of Kenya recognizes the right of its people to safe food” (http://kilimodata.developlocal.org).

This study was done at Aten commercial village, Teso South Sub-county, in Busia County.  The solar dryer fabricated at KALRO-Katumani (Figure1) was placed on a flat open area free from any shading. Before it was put into use, temperatures were taken for three consecutive days to establish the level of achievable heat in degrees centigrade. Once satisfied that the dryer was capable of generating the heat required in the drying of cassava chips, it was put into use. Fresh cassava roots were peeled and washed in running water and sliced using a motorized chipper. The chips were randomly distributed on two trays and uniformly spread. The trays were inserted into the dryer that had two compartments (upper and lower). The temperature was taken daily at an interval of 30 min using a standard thermometer before and after loading the dryer with cassava in order to observe the temperature variation. The quantity of moisture evaporated from the dried material was calculated using:

Using the data obtained, graphs were plotted to show the temperature variations during the day to determine the heat in the dryer and its peak. Traditional methods of drying which involved drying the chopped rectangular pieces spread on a black plastic paper surface in the open sun were also carried out for comparison. The material was dried for 8 h daily and turned twice a day for drying uniformity after which it was kept indoors overnight and the process repeated the following day.

The dimensions of the fabricated solar dryer were 1050 by 560 by 1040 mm. The white (clear) UV treated greenhouse polythene paper with 200 microns was used as cover. Wire nails of 20 mm were used to stack the polythene paper to the wooded structure (Figure 1). The dryer had two removable trays made from coffee tray wire and the double doors open on the outside. Corrugated iron sheet was fixed on the base to collect droplets from the wet cassava chippings in the upper and lower trays. A 50mm by 300mm space was provided at the upper side on both sides to provide for the ventilation of the evaporated moisture. A cost benefit analysis (CBA) comparing the projected or estimated costs of the development of the solar dryer and the associated benefits was considered. The following formula was used to calculate the present value:

The interest rate was taken as 10%.

From the associated benefits accrued, the small scale cassava farmers in the county will be encouraged to develop their own.

From the data obtained, graphs were plotted  to  show  the temperature variations in the respective days. The observations and recordings were done from 10.00 am up to 4.30 pm at an interval of 30 min. Figure 2 shows the observed temperature variations which in day one was at its peak at 47.9°C, in day two at 41.7°C and in day three at 42.7°C. The mean of the peak temperatures was 44.1°C inferring that the dryer was generating adequate heat to dry the wet cassava chips. The hottest month in Busia county lasts for 2.3 months from January to March with an average daily temperature above 30°C (http://weatherspark.com). 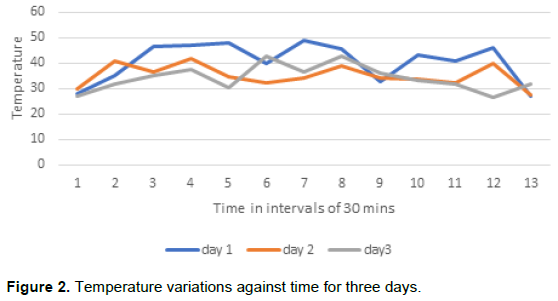 The introduction of wet cassava (wet weight 4.6 kg) chippings in the dryer was followed by temperature against time observations at an interval of 30 min and the results were as shown in Figure 3. In the first day, the temperature recordings were at its peak at 41.7 to 49.3°C in the second day and 41.5°C in the third day. The turning of the chippings in the dryer trays was done after every one hour for uniform drying. The temperatures on the third day were taken from 10.00 to 11.00 am and the experiment was terminated when it was observed that the chippings had fully dried with a moisture content of 16% dry and dry weight was at 1.985kgs. The recommended final moisture content of dried cassava is 14-17% according to Pechaporn et al. (2017). The quantity of moisture evaporated from the dried material was 2.4w/m2. The physical properties of the dried cassava chippings were soft, white in color (Figure 4). From the results, it was observed that it took the fabricated dryer two and a half days to dry the cassava chippings from a wet weight of 4.6 to 1.985 kg dry weight. This was a shortened period of drying the cassava chippings as compared to traditional methods of drying in the open sunlight. This method of drying  using  an  enclosed  solar  dryer  was  cleaner  and hygienic compared to traditional methods and is in agreement with Hasan and Langrish, (2017) who experimentally found that solar dryer required a lower drying time compared with open sun-drying process. The small scale cassava farmers exposed to this technology were in commercial villages of Aten, Tangakona, Munongo and Golia in Busia county. The productive gains from this project were reduction in labour due to the shortened period of drying, improved hygiene and food safety. 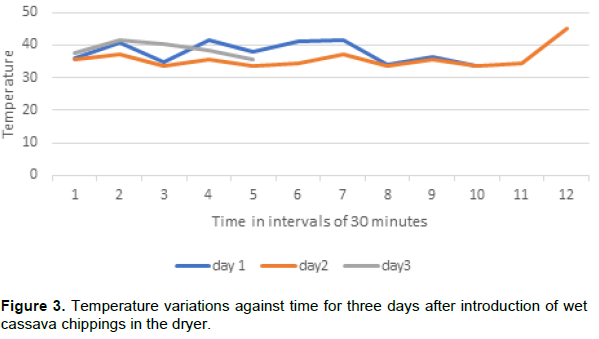 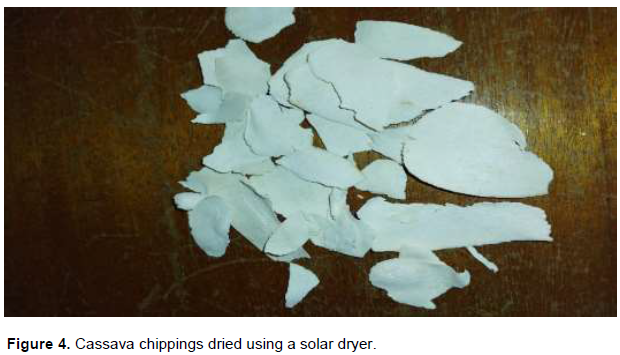 The  CBA  was  calculated   as   seen   in   Table   1.   The calculated present value in one month was Kshs. 10,274.54. From the CBA analysis, it was observed that the benefits (Kshs. 15,700) outweighed the cost (Kshs.4398) of developing a solar dryer for one month. From the associated benefits accrued, the small-scale cassava farmers in the county were encouraged to develop their own and benefit from the technology. 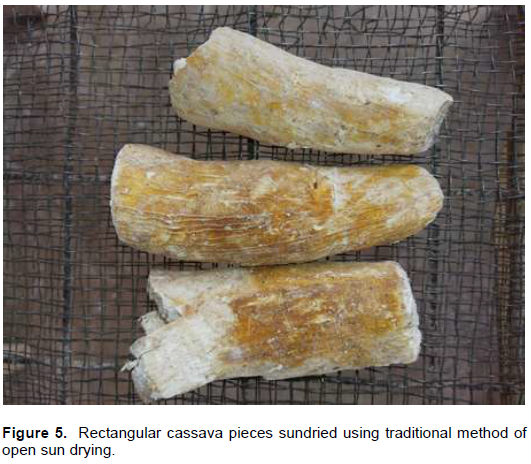 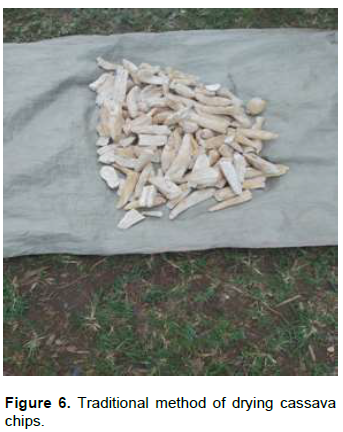 The main objective of this study was to evaluate the performance of a solar dryer for enhanced value addition to small scale farmer’s cassava in Busia County. The study concluded that the solar dryer was a faster, efficient and more hygienic method of drying cassava chippings compared to traditional methods. The dryer was recommended to the small scale cassava farmers for increased cassava production, reduced cost of preparing safe food, diversified use of cassava and enhanced food security.

The authors declare that there is no conflict of interest whatsoever.