Evapotranspiration and crop coefficient for Radish under protected cultivation

The objective of this study was to evaluate the real crop evapotranspiration and radish crop coefficient, “Crimson Gigante” cultivar, for different phenological stages under protected cultivation. The research was performed from March to April 2015 in pots arranged in greenhouse located at the Federal University of Campina Grande (UFCG). Dripping irrigation system was used for plants irrigation and the management was based on reference evapotranspiration (ET0). The water efficiency application of irrigation system (Ea), gross irrigation depth (LB), real crop evapotranspiration (ETr) and crop coefficient (kc) were determined during radish cycle cultivation. The results showed Ea = 89,30%, average daily LB of 4.31 mm, accumulated values of ETo and ETr of 175 and 150 mm. The maximum kc (0.94) was obtained in the intermediate phenological stage (III) and the minimum kc (0.58) occurred in the final stage (IV) with ETr of 75.4 and 14.5 mm, respectively. The crop coefficients were similar to those in the literature, except in the last growth plant stage. The increase in leaf area can be used as a parameter to estimate the water consumption of radish plants.

Radish (Raphanus sativus L.), an herbaceous plant belonging to Brassicaceae family, is a small vegetable which root is their comestible part. This plant is characterized as being very sensitive to variations in soil moisture and in a situation of minimal scarcity or excess water, presents physiological disturbances that interfere with its productivity and commercial root diameter, especially due to cracks that results in tubercle (Filgueira, 2008).

Among the irrigation systems recommended for this crop, drip irrigation with high efficiency of water use in agriculture is evidenced, because it is applying the water irrigation depth only in root zone of crops and maintaining soil moisture close to field capacity (Mantovani et al., 2012).

However,   it  is  very   important   to   know   the   water requirements of radish crop so that an efficient management of the irrigation can be carried out and, in this way, the soil moisture conditions can be maintained so that the crop can satisfy its water needs during the different stages of development (Alves et al., 2017).

The parameter that reflects the plants water requirements is the evapotranspiration with substantial relevance for irrigation, because it represents the amount of water necessary to be replaced by irrigation (Camargo and Sentelhas, 1997). The evapotranspiration parameter means the simultaneous occurrence of soil water evaporation and plant transpiration process as function of energy balance, atmospheric demand and soil water supply to plants (Adorian et al., 2015).

In this context, the objective of this study was to evaluate the real crop evapotranspiration and the crop coefficient of radish, “Crimson Gigante” cultivar, for different phenological stages under protected cultivation.

The radish cultivar used was the “Crimson Gigante” with the seeds produced in expanded polyethylene trays of 128 cells filled with commercial substrate. Transplanting occurred at 8 days after sowing. The crop was cultivated in 60 polyethylene pots with 12 L and with 1.0 m spacing between the rows and 0.50 m between plants. In each pot, a 1 cm layer of gravel number 1 was placed, covered with geotextile blanket and 14 dm3 of soil. To convert the pots into drainage lysimeters to perform water balance, a hole was made at base of each pot. The soil used was classified as medium texture according to Embrapa (2013) methodology.

A dripping irrigation system with a flow of 2.3 L h-1 and irrigation management was utilized based on Hargreaves and Samani (1982) model, according to methodology proposed by Medeiros et al. (2013) for reference evapotranspiration (ET0) determination (Equation 1):

The air temperature and air relative humidity data during the experimental period from sowing until harvesting, equivalent to 37 days, were collected by sensors installed inside the greenhouse. The Christiansen uniformity coefficient (CUC) of irrigation system was 94%, considering a potential efficiency of the irrigation system (Eap) of 95 % according to Equation 2 (Bernardo et al., 2008):

The gross irrigation depth was determined as a function of the crop evapotranspiration and the efficiency of irrigation system through Equation 3 (Mantovani et al., 2012):

The real crop evapotranspiration (ETr) was quantified through the water balance (Silva et al., 2005), according to Equation 4:

In the conditions of radish cultivation, the terms ΔArm, P, R, AC and DP were considered null, because it is an experiment in pots, with frequent irrigation in greenhouse. Rearranging the terms of Equation 4, we have Equation 5:

Thus, it was assumed that the ETr value between two irrigation events was equal to quantity of water applied to soil in question, considering that moisture was uniform throughout the soil profile. The crop coefficient (kc) was estimated according to Equation 6:

f = correction factor for radish, (0.57) dimensionless, according to the methodology proposed by Matos et al. (2015).

The leaf area index (IAF, cm2 cm-2) was calculated by means of the leaf area ratio (AF, cm2) and the area of the pot available to the plants, (AT, cm2), according to Equation 8. 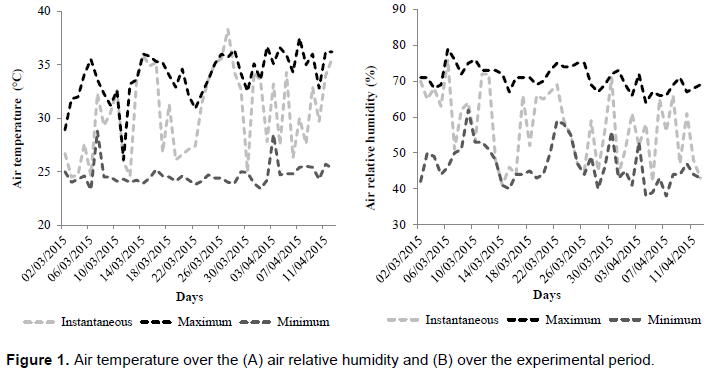 The water application efficiency of the irrigation system was 89.30% being classified as acceptable by Bernardo (2006) for dripping irrigation system. The average daily gross irrigation depth (LB) was 4.31 mm, corresponding to 91.31% of reference evapotranspiration (ET0). Lacerda et al. (2017) verified that irrigation depth of 100% ET0 and values close to this one have a better effect on the development and productivity of the crop, so the depth used in the present study was adequate. 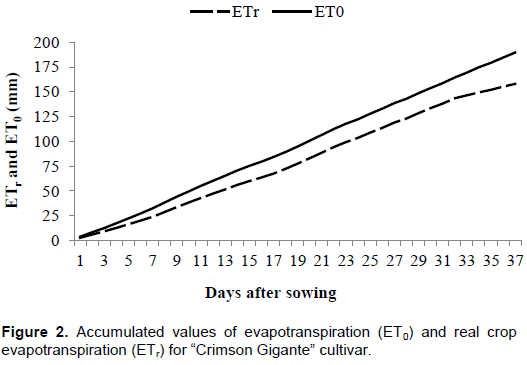 Oliveira Neto et al. (2011) in research with beet, also a tuberous root, cultivated under different dead coverages, observed that the maximum water consumption of the crop was 4.0 mm day-1 and was close to the consumption of the radish of the present study.

The total water consumption of the crop, characterized by its evapotranspiration, for each phenological phase was 23.95 mm (phase I), 46.63 mm (phase II), 75.40 mm (phase III) and 14.50 mm phase IV). In daily average values, the ETr was 3.42, 4.66, 5.02 and 2.90 mm corresponding to the phases I, II, III and IV, respectively. The duration of each phenological phase of the crop, in the order of the phases, was 7, 10, 15 and 5 days. The ETr increased with the development stages of the plant until the phenological stage III, from which it decreased in the final phase of the crop cycle (phenological phase IV) due to the senescence of the plants. This is because with the development of the crop, there is an increase in the water requirement by the plant to supply their physiological necessity, being phase III of filling of the tubercles the phase with the highest consumption.

Alves et  al. (2017)  in  research  with  radish,  “Crimson Gigante” cultivar, observed that the highest daily values of crop evapotranspiration were recorded in stage III (1.84 mm day-1). The stage IV presented the lowest water consumption because the culture was in the maturation stage and fruit harvest. These results are consistent with those obtained in the present work. However, ETr for the same phenological stage was 4.81 mm day-1 and it was 2.6 times highest than the crop evapotranspiration found by Alves et al. (2017). This  difference  can  be  explained by the fact that climate is one of the main factors in determining the quantity of water evapotranspirated by crops.

Radish crop coefficients (kc) for the different phenological phases are shown in Figure 3. It was observed that the kc of radish “Crimson Gigante” cultivar was higher in phenological phase III (0.94), followed by phenological phases II (0.84), I (0.73) and IV (0.58). Considering  that   the   maximum  kc  coincided  with  the phase of highest water consumption characterized by the highest ETr and that the same tendency occurred for other development stages, the consistency of the results obtained for kc values was verified. When comparing the crop coefficients of the present study throughout the radish cycle with the values obtained by Doorenbos and Pruitt (1977), FAO-56 (Allen et al., 1998) and Marouelli (2007), it was verified that coefficients obtained in this research for all phenological phases (Phase I = 0.70, Phase II = 0.80, Phase III = 0.90 and Phase IV = 0.55) were similar to the coefficients found by Marouelli (2007), followed by FAO-56 values with the exception of phase IV (phase I = 0.70, phase II = 0.80, phase III = 0.90 and phase IV = 0.85) (Figure 3). 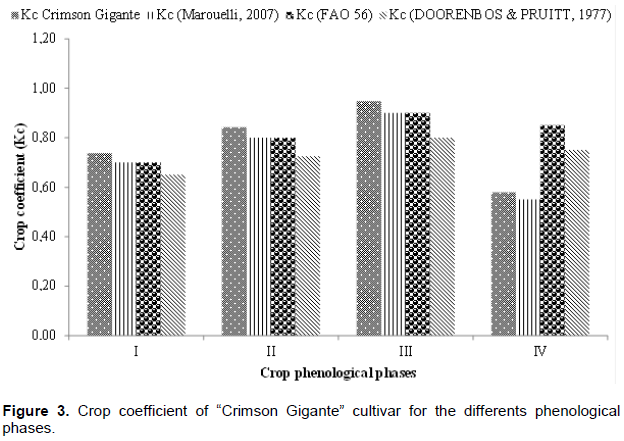 This variation of kc values in relation to the other authors can be explained considering that the kc was determined as a function of ET0 that depends on the interaction between the various climatic elements (solar radiation, air temperature and air humidity) and that the ETr was obtained under greenhouse conditions.

The coefficients obtained in the present study differed from the values found by Alves et al. (2017) for phenological phases I, II and IV (0.45, 0.55 and 0.65, respectively), but presented similarity in phase III (0.95). This fact is justified by the climatic differences of the places where the studies were conducted.

Silva et al. (2014) evaluated beet cultivar Early Wonder and verified maximum ETr of 2.37 mm day-1 in the intermediate stage (phenological phase II) under salt stress conditions. For Itapuã 202’s cultivar the highest ETr was 3.00 mm day-1 at the same phase. These results differ from those obtained in the present study and can be justified because of salinity influences  that  can  affect plant physiology and, in this way, reduce crop evapotranspiration. The authors also determined the crop coefficients for the different phenological phases of the beet and observed for phases I, II and III kc values of approximately 0.3, 1.0 and 0.9 for Early Wonder and 0.20, 0.85 and 0.50 for the cultivar Itapuã 202. These differences can be attributed to local conditions, crop varieties and cultivation conditions.

For Lopes et al. (2011), both leaf area and leaf area index are plant growth factors that indicate the capacity of the plant's assimilatory system to synthesize and allocate organic matter in the various organs that depend on the photosynthesis, respiration and translocation of photoassimilates of the sites of carbon fixation to the places of use or storage, where there is growth and organs differentiation.

The radish leaf area index significantly interferes with actual evapotranspiration and reference evapo-transpiration, so that the higher the LAI the ETr and the ET0 increase linearly (Figure 4B). It should be emphasized that the maximum demand coincides with the larger leaf area of the crop, thus evidencing the effect of the photosynthetically active leaf area on the water demand for the plants. These results show a great influence of IAF on the perspiration of radish plants.

According to Reis et al. (2009), the evapotranspiration determined  using the Penman-Monteith  method, correlates strongly with the leaf area index under protected environment conditions.

i) The water consumption and the crop coefficient of “Crimson Gigante” radish are maximum in the phenological phase III of development and formation of the tubercles and present minimum values in phase IV of maturation.

iii) The crop coefficients are similar to those in the literature, except for the last stage of development of the plant (phenological phase IV).

v) The increase in leaf area can be used as a parameter to estimate the water consumption of radish plants.