Food security continues to be affected by global climatic changes which include increase of drought stress. A sustainable solution is to develop crop cultivars that are tolerant to climatic stresses. Among all crops cassava has a high potential to mitigate hunger. A field experiment was conducted to evaluate the performance of 79 cassava (Manihot esculenta) varieties under drought stress. The parameters evaluated were fresh storage root weight (SRFW), number of storage roots (NSR), above ground weight (AGW), plant height (PH), harvest index (HI) and leaf retention (LR). Results showed significant variations among varieties for most traits. Under stressed treatment, positive correlation was expressed between SRFW and NSR (0.373**), AGW (0.301**) and HI (0.560**). The HI and AGW expressed negative significant correlations-0.398**. Under non-stressed treatment, SRFW had a positive and significant with all the traits NSR (0.434**), AGW (0.377**), PH (0.102*), HI (0.437**) and LR (0.184**). There was negative significant correlations between HI and AGW (-0.482**). SRFW was used as a primary trait to select best performing genotypes. Most of the drought tolerant varieties expressed higher HI, NSR and AGW; hence, termed as target traits in selecting drought tolerance in cassava

Global climatic changes like increase in frequency and intensity of drought affect agriculture and food security at large. Among the effects of climate change, drought is the most frequent factor (Athar and Ashraf, 2009). Drought’s effect hinders crop production with estimates indicating that drought independently contributes up to 17% yield loss of  the major crops when compared with other abiotic stresses  (Athar and Ashraf, 2009). The rates of yield reduction for major crops such as barley, rice, sorghum, maize and wheat will therefore increase by more  than   50%   in   2050  and  almost  90% in  2100  if sufficient adaptation measures are not implemented (Athar and Ashraf, 2009). A necessary and sustainable solution is to develop crop cultivars that can tolerate these climatic stresses to be able to feed the growing population (El-Sharkawy, 2007).

Cassava (Manihot esculenta) has a high potential to reduce hunger as compared to other crops especially in the developing countries. The crop is resilient to climatic changes and could therefore give options while other major food crops face the climatic challenges (El-Sharkawy,  2007). It is drought tolerant because it can be grown in low fertile soils (Burns et al., 2010) and can be easily propagated (Hillocks, 2002). Additionally, the tubers which are highly perishable can be left in the soil and fetched when needed for up to 3 to 4 years after maturity (Okogbenin et al., 2013). After rice and maize, cassava is the third most important source of calories in the tropics (El-Sharkawy and Cadavid, 2002). The crop’s leaves can be consumed as vegetables because they have proteins and vitamins contents (Westby, 2002). Cassava serves as a greater part of the diet for almost a billion people in approximately 105 countries and Africa is the largest producer with 118 million tons (FAO, 2018).

The ability of cassava to be tolerant to drought has been associated with several morphological traits that enable it to prevent the negative effect of drought stress. Some of the traits include fine and deep rooting to access water, reduced leaf canopy and production of small leaves among others (Bull et al., 2011). Morphological traits are useful when it comes to primary assessment for drought tolerance in cassava because it provides information on variation and correlation on these traits (Okogbenin et al., 2013). However, they are highly influenced by the environment. Therefore, identification and characterization of the morphological traits will be critical in selecting drought tolerant cultivars for the purpose of cassava improvement. Rather than a single trait, a combination of different traits of direct importance is always used as selection criteria (El-Sharkawy and Cadavid, 2002). Characterization of these morphological differences therefore, will establish an essential foundation for future development of drought associated markers for cassava.

This study therefore aimed at assessing the performance of selected cassava varieties under drought conditions using morphological traits and identified high-yielding drought-tolerant cassava varieties as a means of contributing to increased food security.

The experiment was carried out in Kiboko research station in Makindu sub-County of Makueni County, Kenya. The site is classified under arid and semi-arid lands (ASAL) of Kenya. Soil type analysed during the experiment was sandy clay loam. Rainfall data during the experiment confirmed a bi-modial pattern with long rains received between March and May and short rains between October and December. There was a period of drought from June to September  before the onset of short rains. The maximum mean annual temperature ranged from 29 to 30°C, while minimum temperature varied from 13 to 18°C.

The experiment was laid out in a randomized complete block design (RCBD) and 79 cassava varieties were used. Approximately,  1.5 ha of land was ploughed and each split into four blocks of equal sizes and each block divided into 79  plots  consisting  of  four  rows spacing 1×1 m per plot. Each row consisted of four plants per variety. For plant establishment, irrigation was sustained through overhead irrigation. Thirty days after planting (DAP), the treatments were introduced whereby, two blocks watered after every week and the other two after every two weeks. There was no application of fertilizer or agro-chemicals. The crop was manually weeded after every two months and the treatments were applied untill harvesting. Harvesting was done at 12 months after planting.

Data on the plant parameters was taken using standard cassava descriptors of IITA and modified by Fukuda et al. (2010) to evaluate the 79 cassava genotypes. Different parameters were collected and recorded at 3, 6, 9 and 12 months after planting (MAP). Vertical height (cm) was measured from the ground to the top of the canopy and recorded as plant height. After harvesting, storage roots (NSR) were counted manually with length greater than 20 cm and above ground weight (AGW) was obtained from the stems, branches and leaves. The storage fresh roots weight (SRFW) was measured using a scale, per plant. The harvest index (HI) was measured using to the formula: HI = weight of the roots / weight of roots + weight of above ground biomass. Leaf retention (LR) was determined at six months after planting because this period normally coincides with drought stress in most cassava growing regions in eastern and southern Africa.

The data were subjected to a two-way analysis of variance (ANOVA) using GenStat 12.0 statistical package. Least significance difference (LSD) at 5% probability level was used to compare treatment means. The Pearson correlation coefficient (r) was used to analyze the inter-relationship between traits.

Performance of the genotypes

Most of the genotypes assessed varied significantly (P<0.001) within genotypes, treatments and interactions between genotypes and treatments. 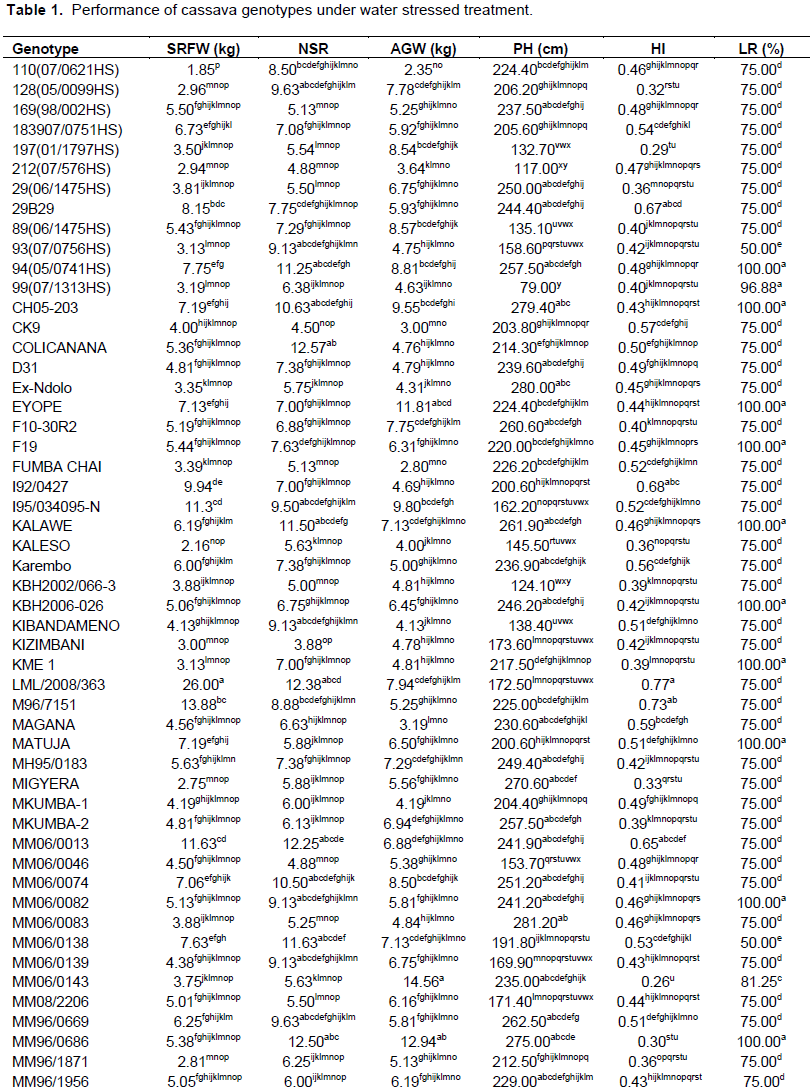 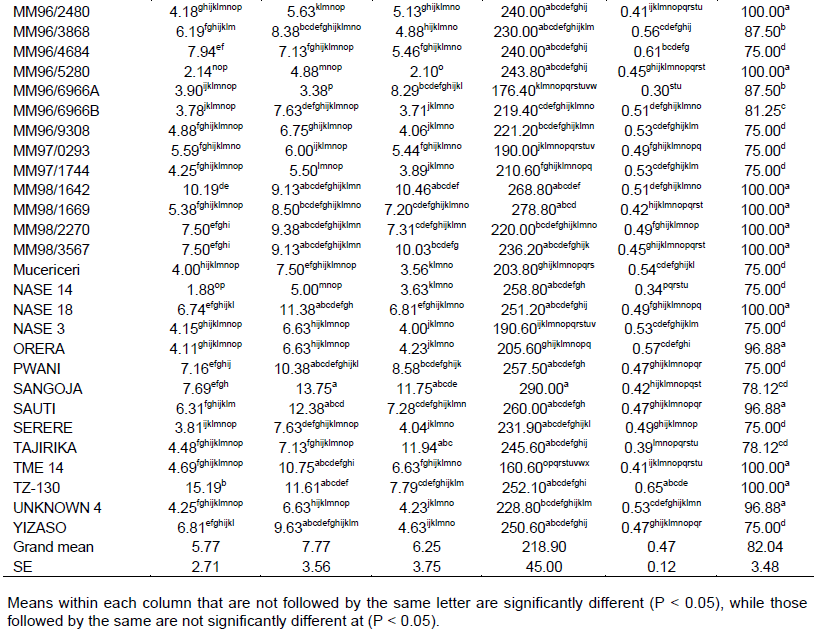 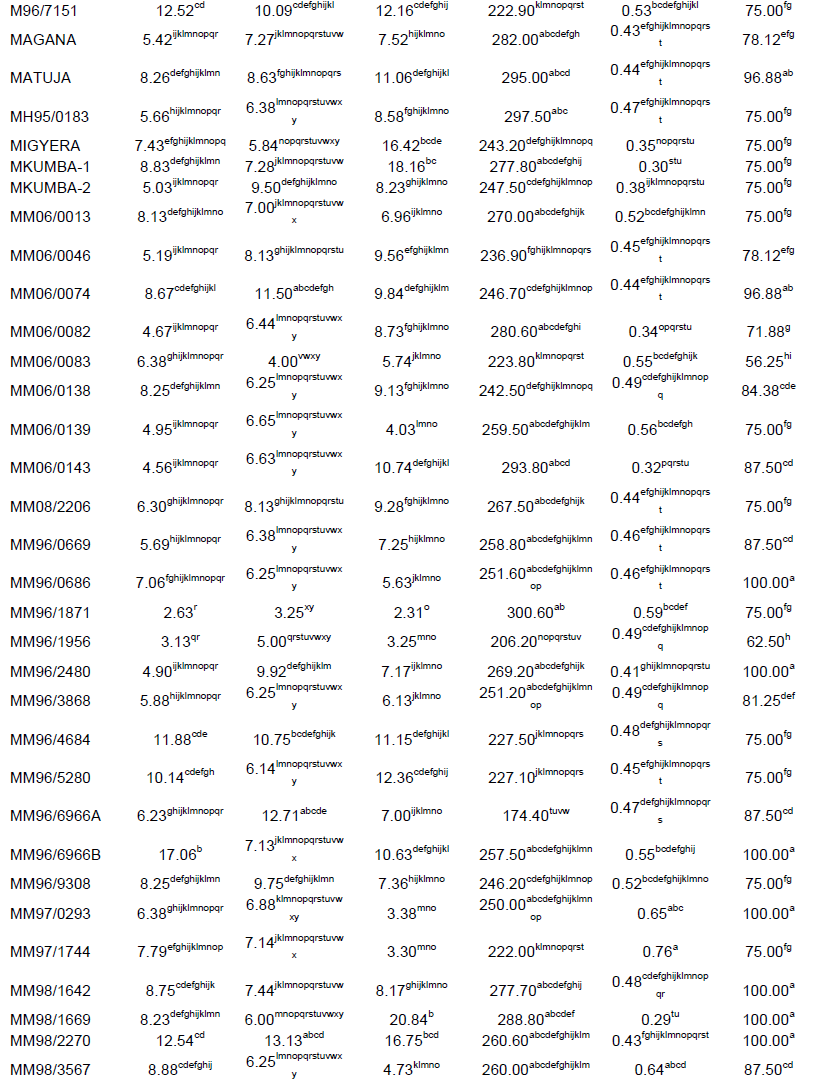 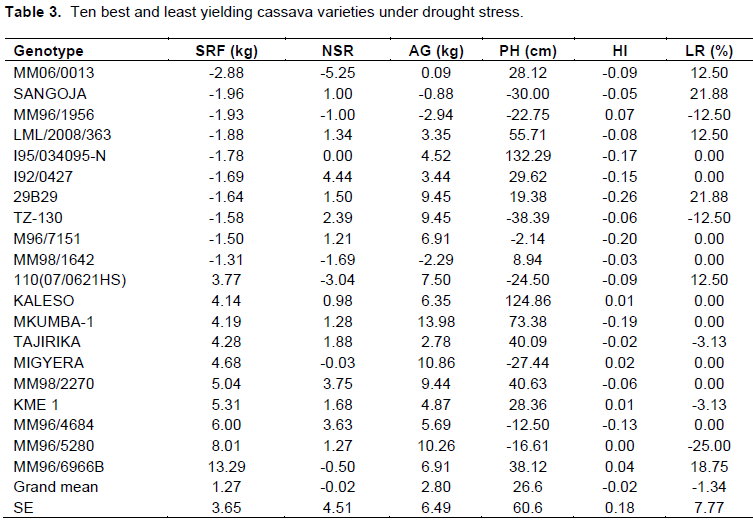 Wide variation was observed between different traits  that were measured and interactions between the genotypes and treatments. The ranking of the genotypes varied with these traits and this is a clear indication of high variability of the traits for genetic combination for cassava improvement. Past research (Santisopasri et al., 2001) , have observed the variations in traits under drought stress, and this indicates the crop’s ability to perform under drought stress varies with cultivar, severity and duration of water stress (Alves, 2002).

Breeding crops for increased yield and adaptation to drought stress often targets crop yield as the trait of interest during selection (Okogbenin et al., 2013). Therefore, SRFW was used to select best performing varieties in the study. Varieties that showed little SRFW difference between non-stressed treatment and water stressed treatment were classified as tolerant while those that showed higher difference were considered drought susceptible. Past research indicated genotypic variation for NSR in cassava just like the results from this study (Athar and Ashraf, 2009). Most of the drought tolerant varieties indicated higher NSR as compared to drought tolerant varieties. Higher NSR indicates the sink strength of the tubers thus can also be used in selecting higher yielding varieties. Significant genotypic variation for AGW in cassava and its reduction due to water stress has been reported by earlier research (Athar and Ashraf, 2009). HI is the proportion of SRFW to AGW, therefore there was a decrease in HI caused by water stress due to the reduction of both SRFW and AGW. Similar decline in HI caused by water stressed has been reported by Kawano (1990).

Higher root yield in the study has been associated with increase in NSR, AGW, PH, HI and LR. Therefore, these can be used as target traits during selection of high yielding cassava under drought stress.

These conclusions have also been observed from other previous studies (Mutegi, 2009). NSR has been  used  as a sink strength indicator of cassava and this means that high  root  number  will  lead  to  an  increase  in  yield  as concluded by Aina et al. (2007). LR has also been recorded to be a very important trait when it comes to the selection of good performing varieties under drought conditions (Aina et al., 2007). Other traits can also be used for indirect selection of high yielding cassava, for example HI which in other words is dry matter accumulation in economic parts of cassava (Alves, 2002) was found positively correlated with the yield. The HI and AGW showed significantly negative correlations and this was attributed to formulae used to compute HI as a ratio of storage root weight to the total weight (Fukuda et al., 2010). Therefore, an increase in AGW increases total plant weight and lowers HI and vice versa (Jennings and Iglesias, 2002). Association between traits provides ways of improving yield through indirect selection for drought prone environments (Fukuda et al., 2010).

Although cassava is a drought tolerant crop, low soil moisture content still affects its growth and productivity. SRFW which was used as the key trait for selection, expressed significant and positive correlation with other traits. Most of the drought tolerant varieties in the study showed higher NSR, HI and AGW as compared to drought susceptible varieties. This suggests that effective selection of drought tolerant cassava depends on a number of traits such as high strong storage sink that is, high root number per plant, high harvest index and good plant canopy.